Hydrogen could be a promising source fuel, and is often considered as a clean energy carrier as it can be produced by ethanol. The use of ethanol presents several advantages, because it is a renewable feed stock, easy to transport, biodegradable, has low toxicity, contains high hydrogen content, and easy to store and handle. Reforming ethanol steam occurs at relatively lower temperatures, compared with other hydrocarbon fuels, and has been widely studied due to the high yield provided for the formation of hydrogen. A new computational fluid dynamics (CFD) simulation model of the ethanol steam reforming (ESR) has been developed in this work. The reforming system model is composed from an ethanol burner and a catalytic bed reactor. The liquid ethanol is burned inside the firebox, then the radiative heat flux from burner is transferred to the catalytic bed reactor for transforming the ethanol steam mixture to hydrogen and carbon dioxide. The proposed computational model is composed of two phases—Simulation of ethanol burner by using Fire Dynamics Simulator software (FDS) (version 5.0) and a multi-physics simulation of the steam reforming process occurring inside the reformer. COMSOL multi-physics software (version 4.3b) has been applied in this work. It solves simultaneously the fluid flow, heat transfer, diffusion with
chemical reaction kinetics equations, and structural analysis. It is shown that the heat release rate produced by the ethanol burner, can provide the necessary heat flux required for maintaining the reforming process. It has been found out that the mass fractions of the hydrogen and carbon dioxide mass fraction are increased along the reformer axis. The hydrogen mass fraction increases with enhancing the radiation heat flux. It was shown that Von Mises stresses increases with heat fluxes.
Safety issues concerning the structural integrity of the steel jacket are also addressed. This work clearly shows that by using ethanol which has low temperature conversion, the decrease in structural strength of the steel tube is low. The numerical results clearly indicate that under normal conditions of the ethanol reforming (The temperature of the steel is about 600 C or 1112 F), the rupture time of the HK-40 steel alloy increases considerably. For this case the rupture time is greater than 100,000 h
(more than 11.4 years).

Extensive work has been performed on the mathematical modeling the development of first-principles reformer models. With the dramatic increase of computing power, CFD modeling has become an increasingly important platform for reformer modeling and design, combining physical and chemical models with detailed representation of the reformer geometry. When compared with first-principles modeling, CFD is a modeling technique with powerful visualization and computational capabilities to deal with various geometry characteristics, transport equations and boundary conditions. [3]A 3D CFD simulation pioneering study of the ESR in microreactors with square channels has been carried out by Uriz et al. [1]. A phenomenological kinetic model based on simple power-law rate equations and considering the following reactions¾ethanol dehydrogenation to acetaldehyde, acetaldehyde steam reforming to H2 and CO2, ethanol decomposition to CO, CH4 and H2, and the water-gas shift-describes satisfactorily the ESR over a Co3O4-ZnO catalyst. The CFD computational study shows that high reforming temperatures (above 625 °C) should be avoided. This is because the decomposition of ethanol competes effectively with the dehydrogenation of the alcohol to acetaldehyde, which is the key intermediate of the ESR process, and results in a reduced hydrogen yield and an increased content of CO in the reformate stream. Their work shows that micro reactors can help to overcome these difficulties by increasing the surface area-to-volume ratio and the catalyst loading. By using these micro reactors, the operating temperature can be reduced while increasing the selectivity and maintaining the level of ethanol conversion [1]. Uriz et al. [2] showed that CFD is a very useful tool for advancing in the development and optimization of these technologies. The interest of CFD for assisting in the understanding of the behavior of hydrogen technologies is also important. Nevertheless, there are also limitations regarding the description of chemical transformations and the physics of some complex phenomena such as in multi-physics systems. Lao et al. [3] developed a CFD model of an industrial scale steam methane reforming reactor (reforming tube) used to produce hydrogen. The CFD model of an industrial-scale reforming tube has been developed in ANSYS Fluent version 15.0 with realistic geometry characteristics to simulate the transport and chemical reaction phenomena with approximate representation of the catalyst packing.

In this work a CFD simulation study of the ESR system has been performed. The proposed computational work is composed of two phases—simulation of ethanol burner by using fire dynamics simulator (FDS) software and a multiphysics simulation of steam reforming process occurring inside the reformer. COMSOL multi-physics software has been applied in this work. It solved simultaneously the fluid flow, heat transfer, diffusion with chemical reaction kinetics equations and structural analysis. It is probably the first time that FDS software has been applied in order to simulate the combustion processes of the burner inside the gas heated heat exchange reformer (GHHR).

The FDS software calculates the temperature, density, pressure, velocity, and chemical composition within each numerical grid cell at each discrete time step. It computes the temperature, heat flux, and mass loss rate. There are three major components of the model: Hydrodynamic, Combustion and Radiation models. FDS code is formulated based on Computational Fluid Dynamics (CFD) of fire-driven fluid flow. The FDS numerical solution can be carried out using either a Direct Numerical Simulation (DNS) method or Large Eddy Simulation (LES). FDS uses a mixture fraction combustion model. The mixture fraction is a conserved scalar quantity that is defined as the fraction of gas at a given point in the flow field that originated as fuel. The model assumes that combustion is mixing controlled, and that the reaction of fuel and oxygen is infinitely fast. Radiative heat transfer is included in the model via the solution of the radiation transport equation for a non-scattering gray gas. The radiation equation is solved using a technique similar to a finite volume method for convective transport, thus the name given to it is the Finite Volume Method (FVM) [4-6[4]]. One advantage of FDS simulation is that it can provide much detailed information on the ethanol burner, including the local and transient gas velocity, gas temperature, species concentration, solid wall temperature, fuel burning rate, radiative heat flux, convective heat flux and HRR (Heat Release Rate). The temperature field at t = 77.5 s is shown in Figure 1. 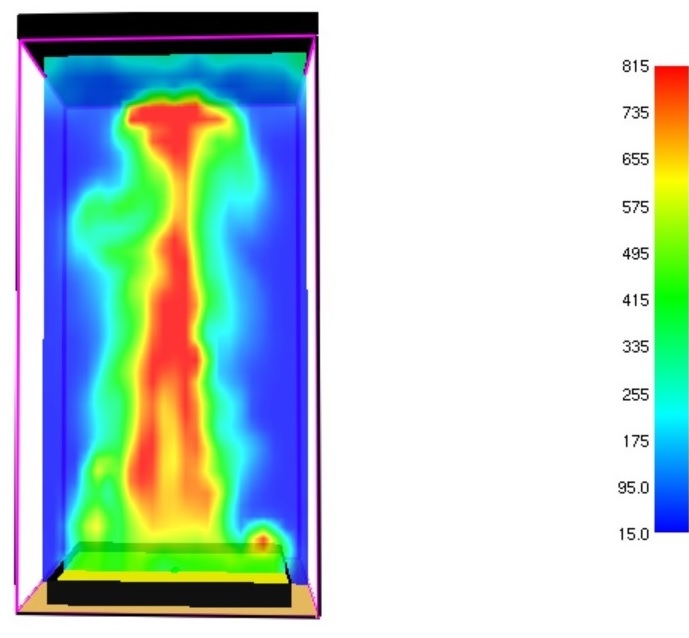 The maximal temperature at time = 77.5 s approaches to 815 °C. Figure 2 shows the radiation heat flux emitted by the burner. 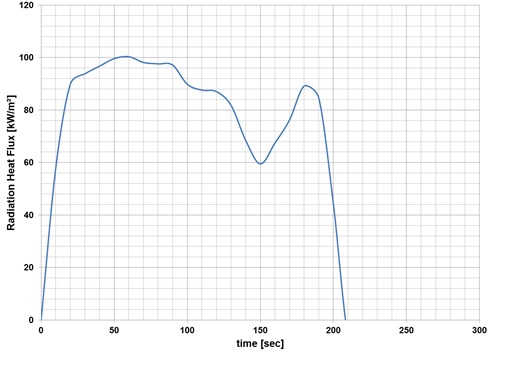 Figure 2 shows that the maximal radiation heat flux is 100,000 (W/m²). It should be noted that the FDS simulation is based on the lower heating values of the ethanol.

The second part deals with numerical analysis of the reformer. The reformation chemical reactions occur in a porous catalytic bed where the heat is supplied through the Ethanol burner to drive the endothermal reaction system. The reactor is enclosed with a HK-40 alloy steel tube. Ethanol and steam are mixed in stoichiometric amounts and enter through the inlet of the catalytic reactor. The COMSOL multi-physics software has been applied in this work. It solved simultaneously the fluid flow, Heat transfer, diffusion with chemical reaction kinetics equations and structural mechanics. The diffusion equations values are obtained from the Chapman-Enskog theory. It is probably the first time that FDS software has been applied to simulate the Ethanol Burner. A parametric study has been performed in order to analyze the influence of the heat flux on the reformer performance and its structural integrity. The numerical results were obtained for heat fluxes of 95,300 [W/m²] and 200,000 [W/m²]. It is shown that the Heat Release Rate produced by the Ethanol burner, can provide the necessary heat flux required for maintaining the reforming process. Figure 3 shows the 3D temperature field inside the reformer. 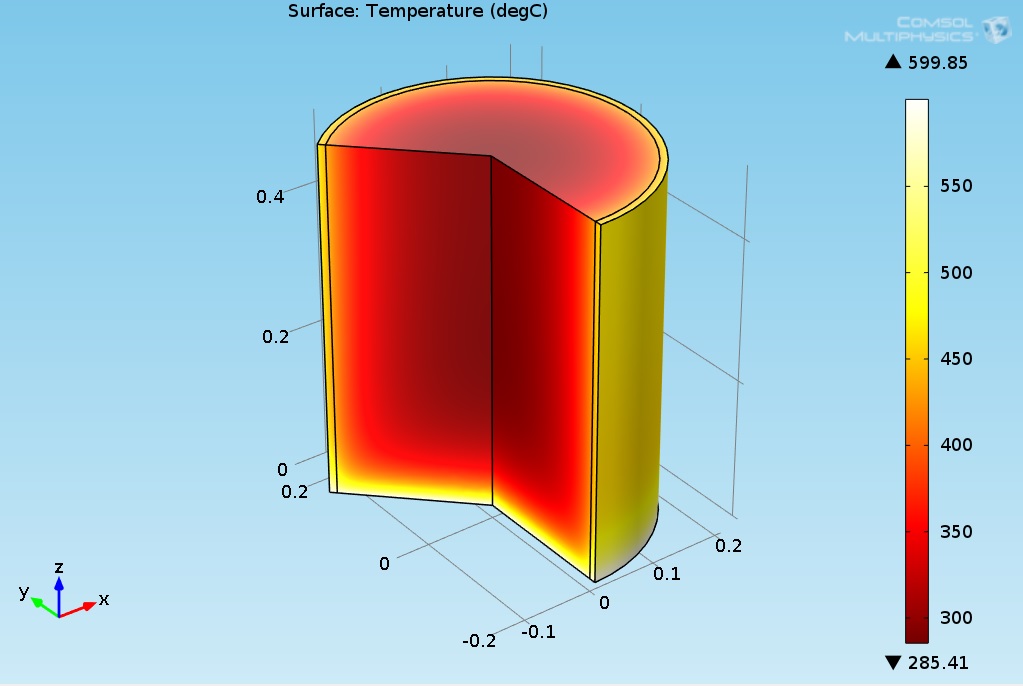 Figure 4 shows the mass fractions of the species (ethanol, CO2 and H2O) along the reformer axis for inlet temperature of 600 °C. 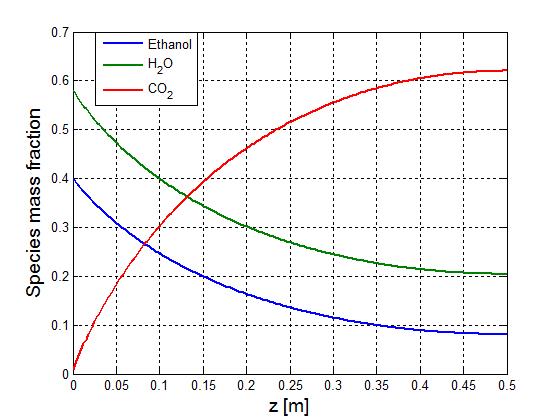 Figure 4. Mass fractions of the species (ethanol, CO2 and H2O) along the reformer axis. 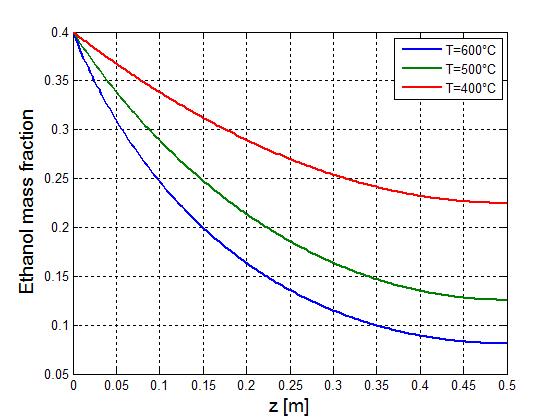 Figure 5. Mass fractions of the ethanol along the reformer axis for various inlet temperatures. 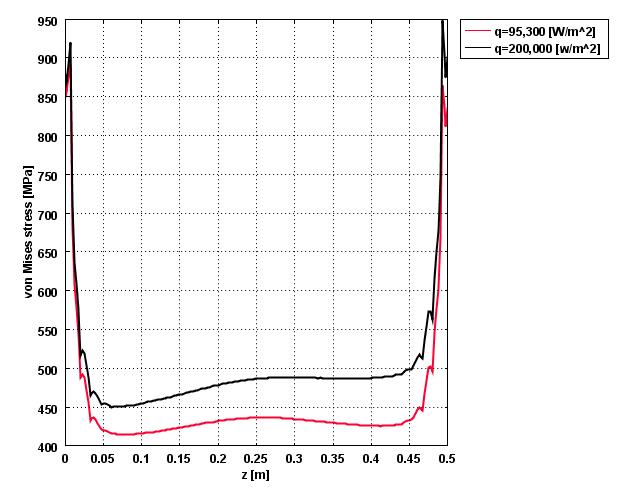 Figure 6. Von-Mises distribution along the z axis of the steel tube.

This effect can cause to mechanical failure in the steel tube. In order to maintain the structural integrity of the tube, HK-40 alloy has been applied in this work. HK alloy, known as HK 40, is an austenitic Fe-Cr-Ni alloy that has been a standard heat resistant material with moderately high temperature strength, and oxidation resistance. This alloy is used in a wide variety of industrial applications such as: Ammonia, methanol and hydrogen reformers; ethylene pyrolysis coils and fittings; steam super heater tubes and fittings. It has been found out that by increasing the heat flux of the reformer, the decrease in the tensile yield strength of HK- 40 alloy is less than 10% (The temperature of the steel is about 600 ºC or 1,112 ºF) [8]. The effect of increasing the heat fluxes increases the temperature inside the steel tube and enhances the thermal stresses (produced by the thermal expansion). Since Ethanol steam reforming occurs at relatively lower temperatures compared with other hydrocarbon fuels, the decrease in the strength of the Steel tube is low. Thus the structural integrity of the HK-40 steel tube is kept.  Figure 7 shows the effect of temperature  on stress rupture of HK 40-2 steel alloy [8]. 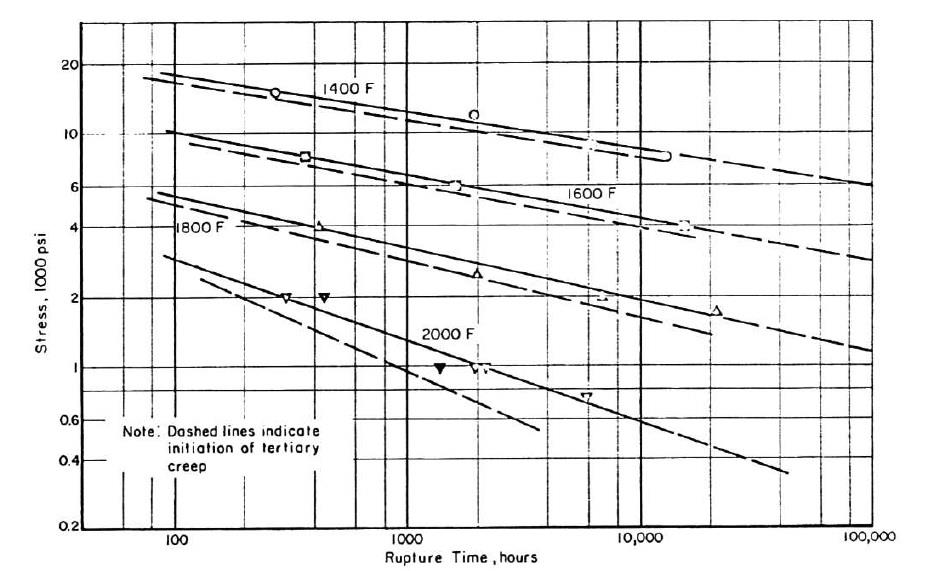 The numerical results for clearly indicates that under normal conditions of the Ethanol reforming (The temperature of the steel tube is about 600 ºC or 1,112 ºF), the rupture time increases considerably [8]. For this case the rupture time is greater than 100,000 hours (more than 11.4 years). The described algorithm described in this work may be applied other reformer system (Diesel, Methanol or Methane).[7]