Eudialyte-group minerals (EGMs) are typical components of some kinds of agpaitic igneous rocks and related pegmatites and metasomatic assemblages. Crystal-chemical features of these minerals are important indicators reflecting conditions of their formation (pressure, temperature, fugacity of oxygen and volatile species, and activity of non-coherent elements.

A unique crystal-chemical diversity of EGMs is determined by a wide variability of their chemical composition involving more than 30 main elements and complex mechanisms of homovalent, heterovalent, and, especially, blocky isomorphism involving groups of atoms having different valency and coordination. The uniqueness of these minerals lies in the fact that they exhibit ability to blocky isomorphism at several sites of high-force-strength cations belonging to the framework and at numerous sites of extra-framework cations and anions.

According to the recommendation of the Commission on New Minerals, Nomenclature, and Classification of the International Mineralogical Association [1], the general formula of EGMs is N13N23N33N43N53M16M23–6M3M4Z3(Si24O72)Ø4–6X2. In this formula, most symbols denote split sites (i.e., groups of closely spaced sites). The “rigid” part of the structures of eudialyte-type minerals (Figure 1) is a 3D quasi-framework consisting of the IVSi3O9, IVSi9O27, and VIM16O24 rings (M1 = Ca, Mn2+, Fe2+, Na, Ln, Y, Sr; coordination numbers are denoted by Roman numerals) connected via M2O4–7 polyhedra and ZO6 octahedra (M2 = Fe2+, Fe3+, Mn2+, Mn3+, Mg, Zr, Ta, Na; Z = Zr, Ti, Nb) and containing additional M3 and M4 sites which are situated at the centers of two nonequivalent Si9O27 rings and can be occupied by IVSi, VINb, VITi, and VIW, as well as subordinate Al, Na, and other components whose charges vary from +1 to +6 [2][3] (Figure 1). In the structures of most EGMs, including eudialyte s.s., M1 cations can be disordered, but in some representatives of this mineral group they alternate in the ring of octahedra, which results in its transformation into the ring (M1.13M1.23O24) and symmetry lowering from the space group R3m or R-3m to R3. In some samples, a splitting of the M1 site [4] or one of the M1.1/M1.2 sites [5] into two sub-sites located at short distance of ~0.2 Å from each other takes place. The M1–M4 sites are considered as the main species-defining “key sites” in the nomenclature of EGMs [1][6][7][8][9]. 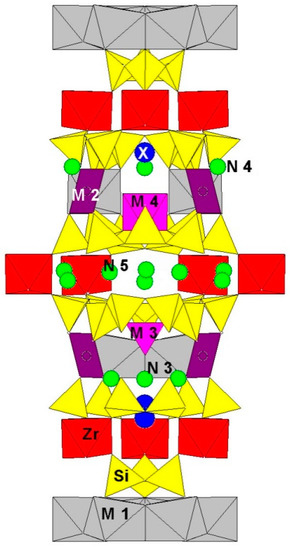 Figure 1. Arrangement of key sites in the eudialyte-type structures viewed along (210).

Blocky isomorphism is defined as the ability of groups of atoms or ions having different configurations to replace each other in crystal structures [10]. Such substitutions are known for a large number of alkaline zircono- and titanosilicates [11]. In EGMs this kind of isomorphism is realized at the key sites M2, M3, and M4, as well as at the N and X sites. The eudialyte group is the only group of minerals in which blocky isomorphism is realized at several sites containing high-force-strength cations. Below we will use the symbols N1–N5, M2, M3, M4, and X to denote corresponding cavities (i.e., micro-regions which can contain several closely spaced sites).

In addition to EGMs with the rhombohedral unit-cell parameters a ~ 14.2 Å, c ~ 30 Å, members of the eudialyte group with modular structures and doubled c parameter are known. Their unit cells contain two eudialyte-type modules which differ from each other by local situations around key sites [12].