Postural assessment corresponds to a stage of the physical examination that aims to identify possible misalignment of the body that may be caused by changes in the spine or other body segments. To assist in this evaluation procedure, several methods and resources are used by health professionals, including software solutions such as desktop and mobile systems.

The human posture can be understood on two aspects, the anatomical alignment of the bone components of the spine, or even, the position and the relationship of the body with the space, guaranteeing biomechanical and physiological efficiency[1]. Despite being organized anatomically and physiologically to adapt to various activities involving weight unloading, the body structure may develop changes in its alignment that, depending on the severity, can be easily visualized in the patient.

The widespread use of portable electronic devices worldwide favors their formal application in health services, supporting the conduct and performance of health professionals[2]. The use of mHealth has been prioritized in healthcare models in countries whose life expectancy has increased and patients need continuous and long-term monitoring[3]. Although mobile devices are used primarily for monitoring patients with chronic diseases, their use also applies to new models of medical diagnostic procedures including human biomechanical functions such as gait and posture assessment.

Human posture is a physical variable of clinical and scientific interest since alterations in the axial alignment may be associated with numerous patient complaints, with pain being a common complaint among them. The ideal posture of human beings should produce greater biomechanical efficiency with lower energy expenditure[4]. For example, spine alignment is organized to ensure mobility and support load, contributing to a correct postural organization of the human being and functions performed by it. However, since numerous structural overloads or congenital disorders in which people are subjected to, as well as the age-related modifications (e.g., muscle strength reduction and reduced range of motion), many individuals develop changes in the body alignment that can culminate in severe postural deviations. These alterations have a multifactorial etiology and can also be genetic, such as adolescent idiopathic scoliosis (AIS)[5] and Hyperkyphosis[6]. Figure 1 illustrates the physiological alignment of the spine and three pathological deviations that can affect it. 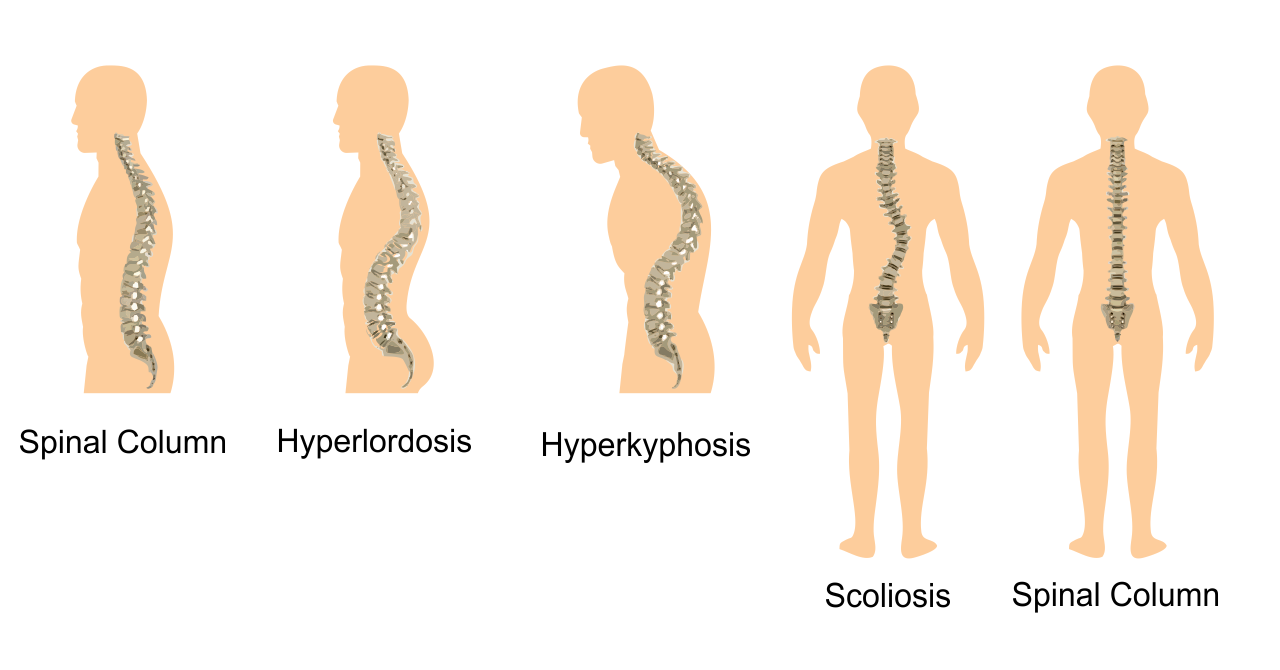 By considering the relevance of postural alignment for the maintenance of body functional kinetic balance[7] and the increasing number of proposals for postural assessment based on the analysis of sagittal and coronal alignment, researchers have  proposed methods that include other resources besides inspection and palpation[1].  Among the reviews involving postural assessment methods, we highlight the studies by Porto et al.[8] and Aroeira et al.[9], which conducted reviews on computational methods for postural assessment. However, research questions in those studies did not cover assessment methods based on mobile applications. In recent years, smartphone applications have gained credibility as a method of social communication and, in the context of medicine, as instruments to support assessment and monitoring of patients. However, to the best of our knowledge, there is no Systematic Literature Review (SLR) that summarizes information about the types and characteristics of the smartphone applications used for human posture alignment assessment. In this context, this paper systematically reviews (Figure 2) mobile applications proposed for analyzing the human posture based on alignment of the body in the sagittal and coronal plane. 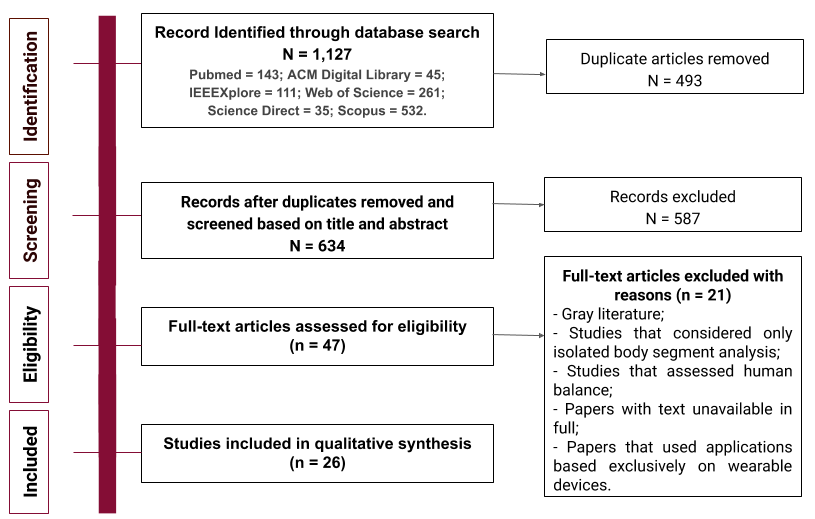 Mobile applications use available features in smartphones to assess body alignment and based on these features, they were classified into sensor-based (US) (eleven applications) and image-based (IBSs) (two applications) solutions. Those based on the US have taken advantage of diﬀerent types of sensors embedded in smartphones which include gyroscope and accelerometer. These sensors capture body displacement or part of it or are applied to analysis of radiographic images providing useful information about spine orientation, either of its isolated segments (e.g., the cervical spine) or the orientation of its entire length, including cervical, thor[10]acic and lumbar segments (i.e., lordosis, khyposis and scoliosis).

In general, mobile applications proved to be reliable and valid for assessing human posture when compared to other postural assessment methods such as Standard Protractor[11] and Digital Inclinometer[12], but two applications showed inconsistencies in performance. iHandy Level[13] nwas compared with the Bubble Inclinometer and they had slightly different performance results. However, according to the authors[13], this result does not indicate a real clinical difference since it may occur due to differences in device handling by assessors. When PostureScreen (PSM) was compared with VICON by Hopkins et al.[14], their performance results were not all similar either. Only 6 of 10 postural measurements were similar to the Motion Capture system (the Vicon system - https://www.vicon.com/what-is-motion-capture), which is based on multi-view triangulation using markers. In relation to performance, regarding the time required to perform the assessment, some smartphone applications were significantly faster[11][15][16][17][18][19][20] when compared to traditional methods. For example, Smartphone Protractor[11] was signiﬁcantly faster on average of 107 seconds, when compared with Standard Protractor. Other example is the CobbMeter used by Qiao et al.[16] whose the mean time consumed was 13.7 seconds for the smartphone application, whereas it was 37.9 seconds for the Cobb standard measurement method. The time spent for evaluation using CobbMeter was also shorter compared to Oxford Cobbmeter, but in this case, Allam et al.[15] pointed that advantages of Cobbmeter combined with Tiltmeter are the accuracy in determining the most inclined vertebrae and the Cobb angle measurement.

Smartphone devices available on the market today are increasingly robust, integrating high computational power (i.e., processing, memory and storage), high resolution cameras, and connectivity with different wireless interfaces. Functional features of these devices have made them popular in several areas, including medicine, which make health assessment and monitoring methods more agile, easier and cheaper[21]. These advances have also been used in the field of human postural assessment based on alignment in the sagittal and coronal planes. These applications use techniques that take advantage of the usage of embedded sensors and image analysis. Scoliguage and Cobbmeter were the US applications most studied (5 times each one) and PostureScreen was the most cited IBS application (5 times). All applications demonstrated to be valid for assessing human posture based on the identification of inclination degrees of body segments and spinal curvatures. However, Hopkins et al.[14] suggested caution when using PSM because they found diﬀerences in postural measurements in sagittal and frontal plane when compared with VICON system[22] in evaluations. This comparison should be prudently evaluated to avoid hasty analysis, since the VICON system is a software for kinematics and kinetics analyzes of subjects made by a set of cameras positioned at diﬀerent angles, while PSM uses only the smartphone camera. In other words, VICON may have advantages over the ability to frame and process images when compared to PSM. Despite these technical advantages of VICON, PSM presented positive results in identifying postural deviations, which shows the potential of IBSs.

When comparing US solutions with IBS applications, we can highlight the advantage that the ﬁrst ones have, since they not only evaluate but also enable the monitoring of human posture and send feedback in real-time by alerting users to modify their posture, although this has not been emphasized, not even in the study of Estrada and Vea[23]. Although new features may be added to mobile applications, US applications already enable the evaluation of spinal inclination angles regardless of whether they are structural anatomical variations, while IBSs provide data related to angles of spinal curves caused by anatomical misalignment of the spine such as hyperlordosis, hyperkyphosis and scoliosis, or body inclinations not associated with these pathological curvatures. Another important advantage of US applications is that they allow for the assessment of the Cobb angle (Figure 3), a method considered gold standard for the assessment and quantification of scoliosis. However, it is worth mentioning that this assessment is based on the radiography analysis, that is, exposure to radiation during imaging exam is required. 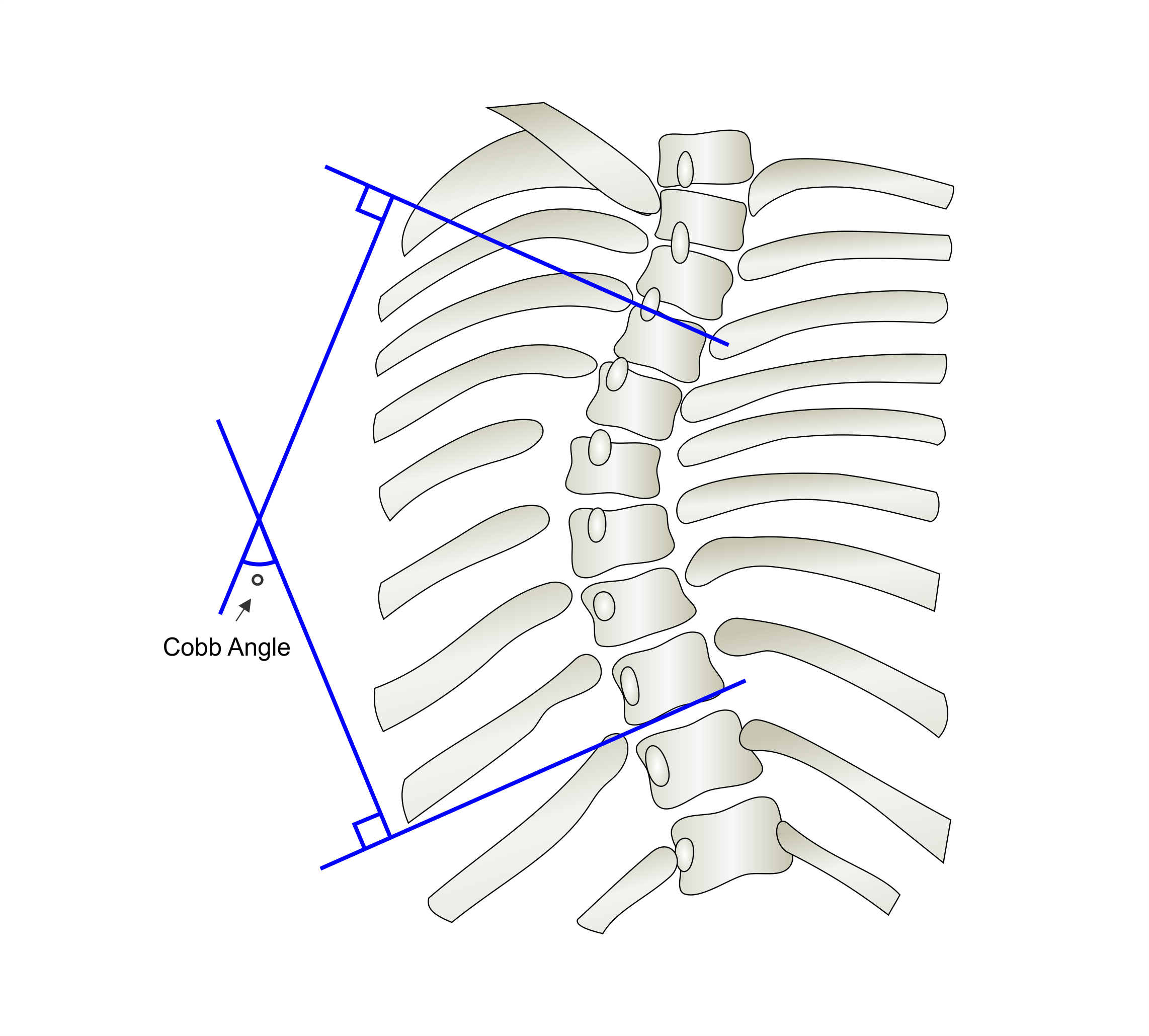 According to the analysis of results, US solutions provide useful information for assessing human posture, but IBSs supply additional information such as the calculation of sizes of the body segments (e.g., leg, arm, forearm) based on the distance between anatomical reference points (e.g., iliac crest, patella, malleoli, elbow, shoulder, ear lobe). In addition, image-based applications, we highlight the advantage that measurements can be taken with the assessor at a certain distance with respect to the patient's position, which is an important function for assessments performed in pandemic times such as the outbreak of COVID-19.