Zeaxanthin and Lutein in Humans

Many factors in the environment (including radiation, pathogens, and various stresses) prompt internal formation of oxidants that orchestrate beneficial adjustments in human metabolism and but can also lead to damage and disease. To prevent adverse effects of these oxidants, humans require antioxidants and anti-inflammatories, many of which are vitamins and other essential micronutrients that must be consumed with the diet. The xanthophylls zeaxanthin and lutein are unique human micronutrients that protect the integrity and function of biological membranes – especially in the human eye and brain.

Humans and other animals cannot synthesize carotenoids de novo, and must obtain carotenoids (or their precursors) from the diet.[1] In humans, the best-studied role of carotenoids is in vision. Notably, β-carotene has vitamin A activity, and can serve as a precursor (Figure 1) to the cleavage product retinal, an essential component of vision purple (rhodopsin). Much of the research on zeaxanthin and lutein in humans has thus far focused on their role in photoprotection against damage, especially age-related blindness (macular degeneration).[1][2] We present below an overview of the photoprotective role of zeaxanthin and lutein in humans, followed by a segment on evidence for a role of zeaxanthin and lutein in visual and auditory processing, general mental acuity, and in a number of chronic diseases and disorders beyond eye disease. 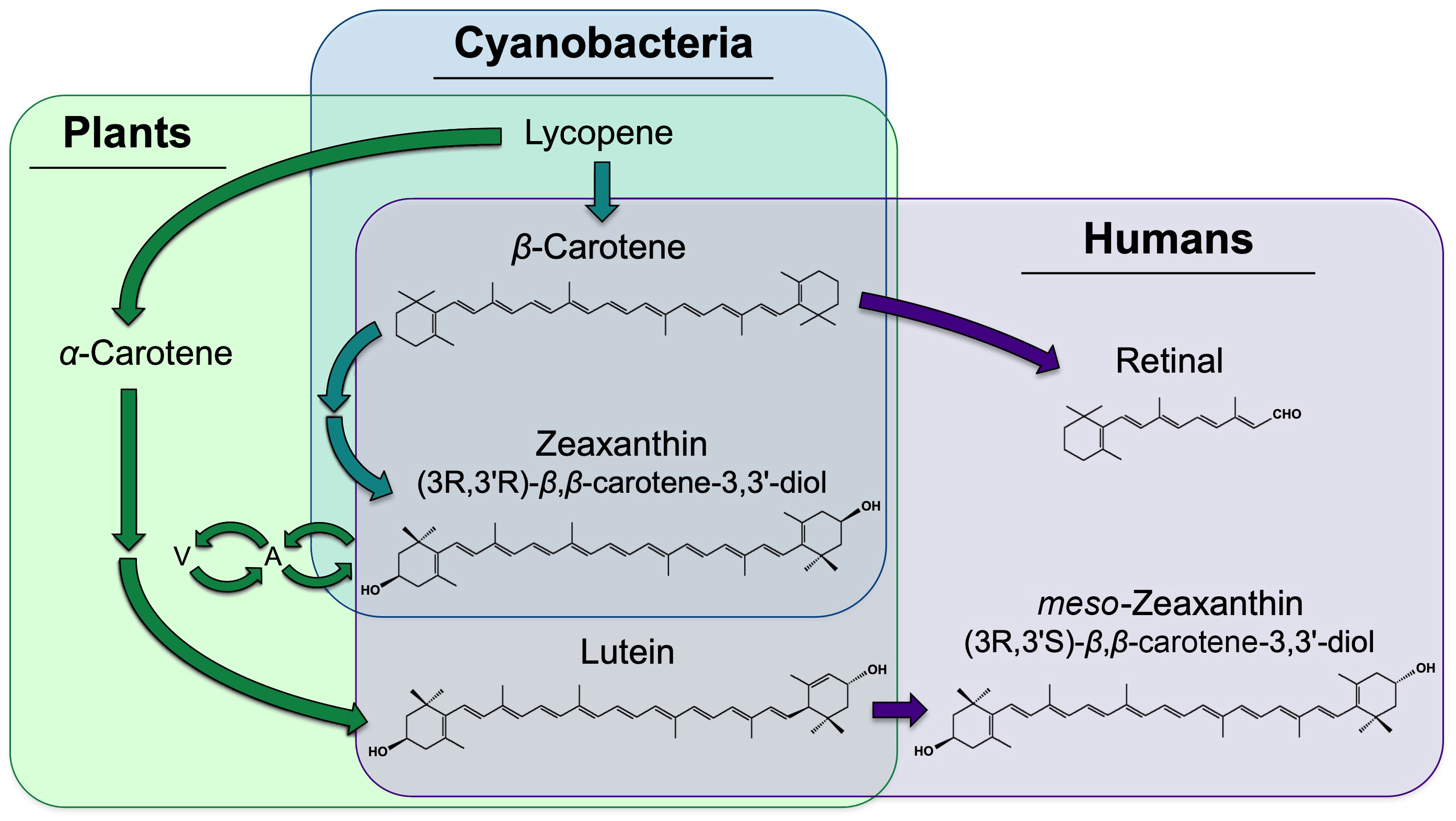 2. Transport and Storage of Carotenoids

Carotenoids are transported from the gut to various organs through the blood stream via lipoproteins. Lutein and zeaxanthin are associated mainly with high-density lipoprotein (HDL), which is thought to be the main vehicle for delivery of these xanthophylls to the retina.[3] Lutein and zeaxanthin are also found in human skin,[4] serving in protection against UV damage. Skin swelling and cell-division acceleration in response to UV exposure were ameliorated by dietary lutein and zeaxanthin.[5] Furthermore, the liver is the site of β-carotene conversion to vitamin A, as well as a depot for storage of carotenoids.[6] Unborn children receive zeaxanthin and lutein from their mothers throughout the prenatal period up to birth, with xanthophyll levels in the retina and brain of human infants impacted by maternal carotenoid status.[1]

3. Protection of the Eye against Intense Visible Light

The photoprotective role of xanthophylls in the eye involves several mechanisms, including attenuation of blue light in a sunscreen-like function, as well as the removal of ROS by de-excitation,[7] as well as the reduction of other reactive radicals.[1] The role of zeaxanthin and lutein in photoprotection of the eye is supported by correlative evidence, as well as experimental or trial-based manipulation. (i) The central portion (macula) of the retina that receives the most intense light features the highest concentration of zeaxanthin and lutein. (ii) Experimental induction of eye damage (photoreceptor death) in a bird model, the Japanese quail Coturnix japonica, established that photoreceptor death by exposure to intense light, can be prevented by dietary zeaxanthin[8] or dietary zeaxanthin and lutein.[6][9] (iii) In human clinical trials, individuals receiving zeaxanthin/lutein supplements experienced less vision loss over time than controls.[1]

It is noteworthy that the macular xanthophylls also enhance the function of the healthy eye—via improved contrast sensitivity[17][18] and reduced glare, which may be related to the filtering of blue light.[1] In addition, zeaxanthin and lutein enhance the processing of visual signals in the brain[19] as well as the processing of auditory signals.[20] Recent evidence, furthermore, indicates that zeaxanthin and lutein function broadly in a number of brain regions that are associated with visual perception, cognition, decision-making, and motor coordination.[21] A correlative study[22] reported lower Alzheimer’s mortality in individuals, with higher levels of zeaxanthin, lutein, and lycopene, but not of other carotenoids (β-carotene, α-carotene, or the intermediate β-cryptoxanthin in the synthetic pathway from β-carotene to zeaxanthin; see Figure 1). A recent nutritional intervention with Alzheimer’s patients, consisting of supplementation with either (1) zeaxanthin, meso-zeaxanthin, and lutein, or with (2) the three latter xanthophylls plus two omega-3 fatty acids (docosahexaenoic acid and eicosapentaenoic acid) resulted in a greater increase in blood xanthophyll concentrations, and greater caregiver-reported improvements in memory, sight, and mood of patients.[23] More research is needed into the possible effects of xanthophylls and their interaction with omega-3 fatty acids, with respect to the solubility and bioavailability of the largely hydrophobic xanthophylls and their function in the brain.

5. Xanthophylls as Anti-Inflammatory Agents that Protect Body and Mind

Age-related macular degeneration and Alzheimer’s disease are both pro-inflammatory diseases involving immune system dysfunction and uncontrolled inflammation. The realization that a state of chronic low-grade inflammation plays a key role in a host of additional chronic diseases (e.g., cardiovascular disease, diabetes, certain cancers, autoimmune diseases) and disorders (e.g., anxiety, depression, bipolar disease, schizophrenia, post-traumatic stress disorder) has been called “one of the most important scientific discoveries in health research in recent years.”[24] Strikingly, memory, attention, learning, and overall cognitive performance is also impaired by systemic inflammation—even in adults considered healthy and with no diagnosis of a disease or disorder.[25] One can hypothesize that carotenoids with antioxidant and anti-inflammatory functions may ameliorate some or all of these conditions. There is a substantial body of evidence for correlations between higher carotenoid levels and a lower risk for various pro-inflammatory diseases.[26]

Like intense visible light, ionizing radiation (that increases in the upper atmosphere and especially in outer space) produces multiple ROS that can trigger system-wide uncontrolled inflammation.[27][28] There is correlative evidence for a possible role of zeaxanthin in protection against ionizing radiation; pilots who reported consuming more antioxidants, including zeaxanthin and lutein, exhibited less inflammation.[29] Sufficient dietary zeaxanthin and lutein may be of particular concern for future human spaceflight and the associated radiation exposure, and a reliable food source that can be grown in limited space with minimal resources and delivers high levels of zeaxanthin and lutein may be critical.[30]

While more research is needed to assess the question of causality between xanthophylls and a lessening of systemic inflammation, evidence for a causal relationship is beginning to emerge from manipulative studies in animal models and humans. For example, Zhou et al.[31] reported that long-term zeaxanthin supplementation lowered the levels of pro-inflammatory hormones and lessened diabetic symptoms, anxiety, and depression in diabetic rats. Stringham et al.[32] extended these findings to humans and, in particular, healthy young subjects that received a supplement with zeaxanthin, meso-zeaxanthin, and lutein for six months. Outcomes of this trial included significantly lower levels of pro-inflammatory hormones and enhanced cognitive performance on a variety of complex tasks, including processing speed, as well as various aspects of memory and attention. Similar improvements of cognitive function in young healthy adults as a result of supplementation with zeaxanthin and lutein were reported by Renzi-Hammond et al.[33]