Mastocytosis is a heterogeneous group of rare diseases defined by abnormal accumulation of clonal mast cells (MC) in the skin, bone marrow and/or other visceral organs.

When a mast cell is activated, these chemicals are released into the surrounding skin. Mast cell chemicals are mediators of inflammation, and cause the blood vessels to leak, resulting in localised itching, swelling, redness and sometimes blistering. This reaction is normal in insect bites and is thought to be a protective mechanism. For example, a mosquito injects saliva when it bites. The saliva triggers mast cell activation to a varying degree, depending on the individual's hypersensitivity to the saliva. The unpleasant itch soon persuades the person to try to avoid getting bitten again. 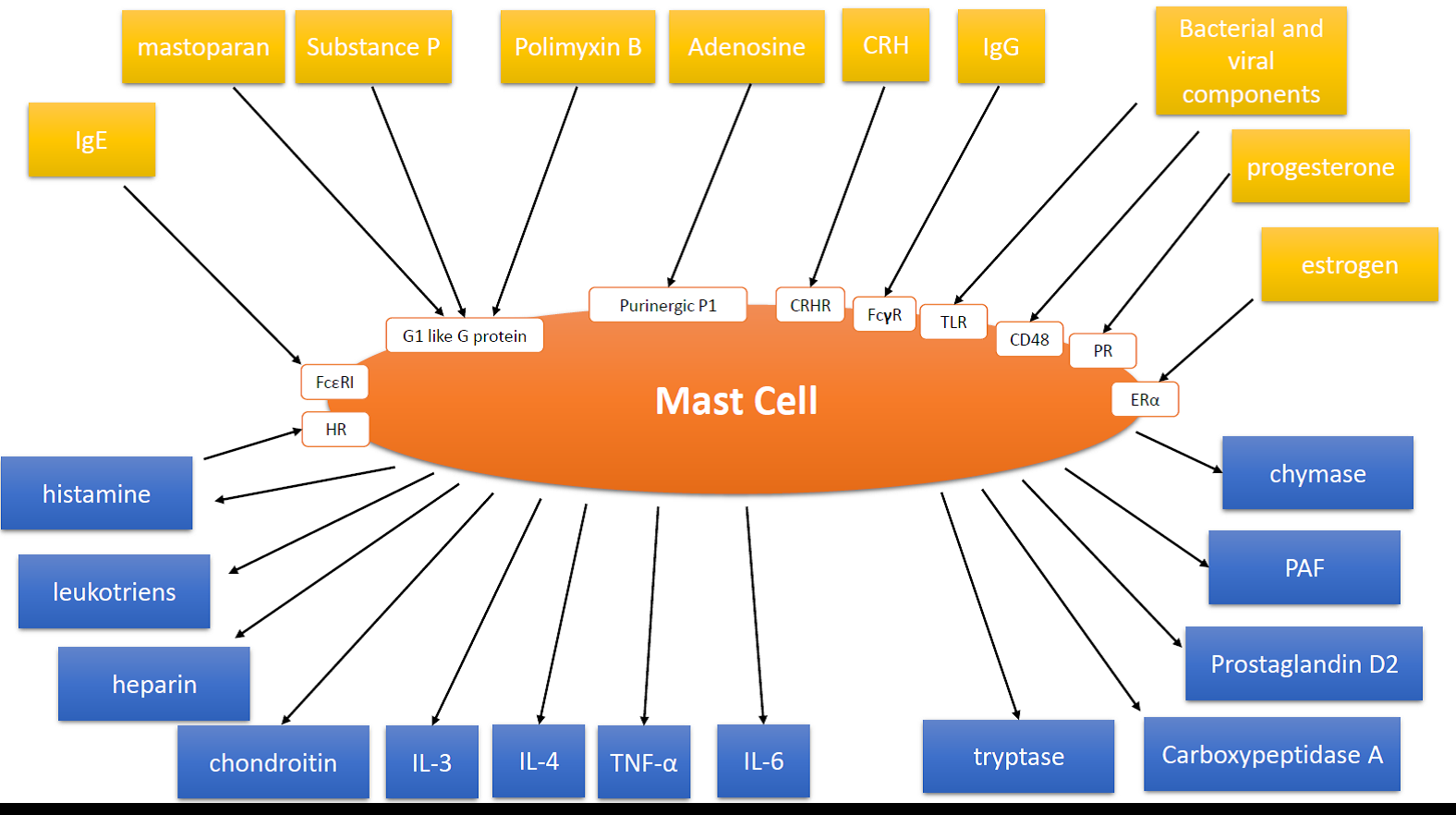 Mastocytosis can be divided in WHO classification into 7 variants: cutaneous mastocytosis (CM), indolent systemic mastocytosis (ISM), smoldering SM (SSM), SM with an associated hematological neoplasm (SM‐AHN), aggressive SM (ASM), MC leukemia (MCL), and MC sarcoma (MCS). The diagnosis of systemic mastocytosis (SM) is based on WHO criteria, including the basal serum tryptase level, histopathological and immunophenotypic (CD2/CD25) features of MCs and somatic KIT mutations in codon 816 [1].

The majority of children are suffering from CM and have a favorable prognosis with spontaneous regression in puberty period. In contrast, in adults, mastocytosis usually presents as SM, and sometimes progresses to an aggressive disease. The background of spontaneous regression of the disease in pubertal period observed in some children remains unclear [2][3][4][5][6][7][8].

In most patients with SM, somatic mutations in the KIT gene are found, the most prevalent in SM being D816V (rs121913507, D[GAC] > V [GTC]). The protein product of KIT (KIT=CD117) gene is a transmembrane receptor for stem cell factor (SCF), a major regulator of MC differentiation and survival. The KIT D816V mutation results in SCF‐independent differentiationof MCs. KIT D816V mutation is detected in more than 80% of all adults with SM. In contrast in children with CM, this mutation is less frequent (35%) and other mutations, located in gene regions encoding the external cellular domain of KIT ((Del419, F522C, ITD502–503, K509I, M541L, L852L), are more commonly found childhood patients (18%). Furthermore, it was found that 48% of children had the wild type WT sequence at codon 816 [7][9][10].

Cutaneous mastocytosis  (CM) is usually diagnosed by its clinical appearance and positive Darier sign. However, a skin biopsy may be helpful for confirmation of clinical diagnosis. [5][31][32].

There different  form of CM:

To set the diagnosis of systemic mastocytosis, ether one major + one minor criterium or 3 minor criteria has to be fulfilled [1][2][3][4].

Systemic mastocytosis occurs more commonly in adults than children (it is extremely rare in children).

Studies of genetic background performed so far in CM and SM focused on gene polymorphisms of cytokines and their receptors (IL-13, IL-6, IL6R, IL-31, IL4R, VEGFA), TLRs and variants of the KIT gene have shown that some cytokine or cytokine receptor gene polymorphisms may be associated with the presence of SM and/or CM [11][12][13][14][15][16]. Other studies performed in ISM found associations of SM disease with SNPs in RAB27A, ETS1, ITGB1, MLL3, and ITGAV genes [17].

In a majority of patients with mastocytosis, mediator-induced symptoms are recorded. These symptoms may be mild, severe or even life-threatening, especially when a concomitant IgE-dependent allergy is also present

The treatment for mastocytosis depends on the particular symptoms of each person. Treatment for symptoms that affect the skin include antihistamines and oral psoralen plus UVA (PUVA) therapy. If the symptoms are not responsive to other treatment, a doctor may prescribe steroid creams, ointments, or solutions to be applied to the skin (topical corticosteroids treatment), imatinib, mast cells stabilisers ( Cromolyn sodium), kinase inhibitors (Midostaurin),  epinephrine, and/or IgE-targeting antibodies are required to bring anaphylaxis (MCAS events) under control.
Proton pump inhibitors can be used to treat gastrointestinal symptoms and bone pain. Many specialists recommended that people with mastocytosis have injectable epinephrine that they can use in case of anaphylactic shock. Other recommendations include trying to avoid known triggers of symptoms of mastocytosis [23][24][25][30].

*Clinical symptoms recorded in patients with mastocytosis and MCAS. In patients with MCAS more than one symptom are typically recorded and in most patients, hypotension and signs of anaphylaxis are found. **Some of the clinically most relevant mast cell-derived mediators are listed. In patients with MCAS, histamine and arachidonic acid derivatives may play a central role. The impact of the other mast cell-derived mediators, like PAF, remains at present unknown. ***In about 1% of all patients with MCA, severe hypotension is associated with fever. Abbreviations: MCA, mast cell activation; MCAS, MCA syndrome; LT, leukotriene; PG, prostaglandin; VEGF, vascular endothelial growth factor (=vascular permeability factor), PAF, platelet activating factor.

Mastocytosis is described as a rare disease, but to our knowledge, the exact incidence and prevalence are not known. A diseaseis considered rare if it affects fewer than 200,000 people in the United States at any given time. An estimate of prevalence from a recent population-based study is approximately 1 case per 10,000 people [6].