A Review of Geometry, Construction and Modelling for Carbon Nanotori

After the discovery of circular formations of single walled carbon nanotubes called fullerene crop circles, their structure has become one of the most researched amongst carbon nanostructures due to their particular interesting physical properties. Several experiments and simulations have been conducted to understand these intriguing objects, including their formation and their hidden characteristics. It is scientifically conceivable that these crop circles, nowadays referred to as carbon nanotori, can be formed by experimentally bending carbon nanotubes into ring shaped structures or by connecting several sections of carbon nanotubes. Toroidal carbon nanotubes are likely to have many applications, especially in electricity and magnetism. In this review, geometry, construction, modelling and possible applications are discussed and the existing known analytical expressions, as obtained from the Lennard-Jones potential and the continuum approximation, for their interaction energies with other nanostructures are summarised.

Following their discovery [1], carbon nanostructures have become the subject of much interest from the scientific community in numerous diverse areas of application. They have many unique physical properties which are superior to other existing materials, such as their high electrical and thermal conductivities, high flexibility, and great tensile strength [2]. They have become one of the major materials driving technological developments with potential applications in many different areas, such as electrical devices from graphenes [3], genes carriers from fullerenes [4], gigahertz oscillators from carbon nanotubes [5] and gas absorbers from carbon nanocones [6].

One specific form of carbon nanostructures is carbon nanotori, which are doughnut-like structures. The seamless toroidal nanotubes having diameters ranging from 300 to 500 nm and rope diameters over 5–15 nm were first found while examining single-walled carbon nanotubes by scanning force and transmission electron microscopy [7]. Later, they were formed from a variety of different experimental methods including laser growth [7], organic reactions [8], chemical vapor deposition [9] and depositing hydrocarbon films in tokamak T-10 [10]. In addition, they can be theoretically constructed from a model that connects together several smaller carbon nanotube segments, perhaps involving different bend angles in order to complete the closed ring of the carbon nanotori [11,12,13,14]. Nanotori structures provide many novel properties, particularly in electronic and magnetic applications [15,16], and their properties are strongly dependent on their geometric parameters, temperature and the chiral vector of the carbon nanotubes used in their construction [16]. Because of their geometric structure, they can be used to trap or encapsulate other nanostructures either within the interior of the nanotori itself or within the central cavity. Since carbon nanotori and other nanostructures do not create bonds between molecules, their main interaction energy originates from the van der Waals interaction energy. By utilising classical applied mechanics, such interactions can be modelled with the Lennard-Jones potential [17]. Moreover, their interaction energy can often be analytically expressed in terms of special functions using the continuum approximation, which assumes that all atoms are uniformly distributed over the molecules so that summations from each atomic pair can be approximated by double surface integrations over the two molecules. Following this approach, the interaction energy of the carbon nanotori and other nanostructures, such as atoms, ions and fullerenes can be obtained as a function of the geometric parameters of the nanotori and the interacting nanostructures, and the distance between the two structures.

In the following two sections, construction techniques, physical characteristics and applications of carbon nanotori are reviewed. In Section 4, the concepts of continuum approximation and Lennard-Jones potential are introduced and in Section 5, the final energy formulae for a number of different systems related to the carbon nanotori are summarised. In Section 6, a brief overall summary is given.

2. Geometry and Construction of Carbon Nanotori 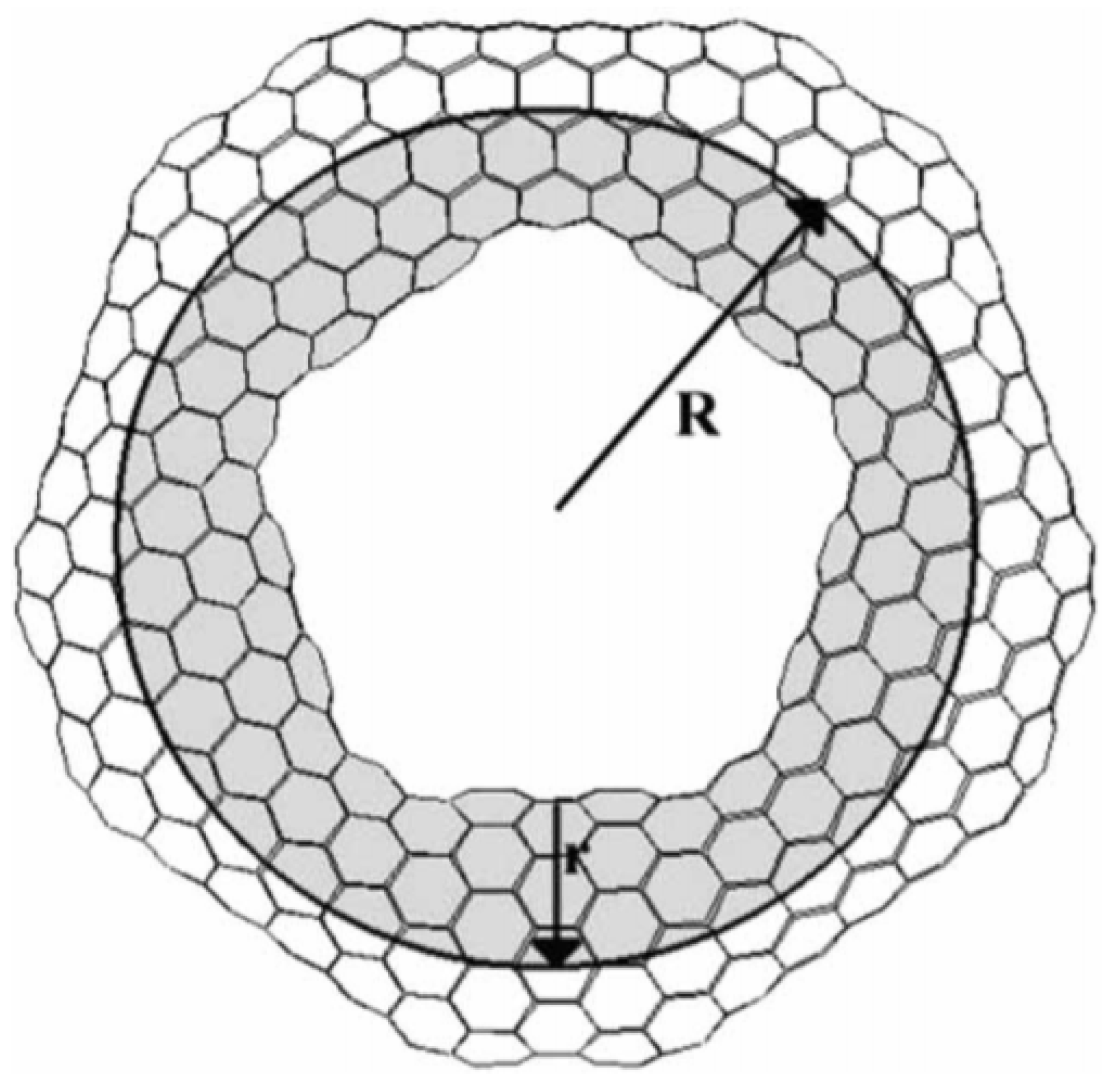 The larger carbon nanotori were discovered in laser vaporisation [7] and thermal decomposition [19] experiments of single-walled carbon nanotubes as shown in Figure 2. Typically, the major radii of observed carbon nanotori range between 150 and 250 nm, while the minor radii are approximately 2–4 nm. These ring structures might be envisaged as curved carbon nanotubes formed by experimental methods, that are bent in such as manner that their open ends are seamlessly connected together. Such a process is kinetically controlled by the ultrasonic irradiation of nanotubes, and the ring structures obtained are stabilised through van der Waals interactions [20,21]. The key condition for the stability of these configurations is that their strain energy must not exceed the binding energy [22], so that the small carbon nanotori with major radius less than 100 nm do not arise from this technique according to the elasticity of the carbon nanotubes [23].

Carbon nanotori can also be produced by other modelling techniques, such as constructing from fullerenes using the Goldberg’s prescription [29,30], sewing the walls of single-walled [31,32,33], double-walled [34] or triple-walled [35] carbon nanotubes at both ends and fabricating from only pentagon and heptagon networks [36].