Cutaneous squamous cell carcinoma (cSCC) is a common type of neoplasia, representing a terrible burden on patients’ life and clinical management. Although it seldom metastasizes, and most cases can be effectively treated with surgical intervention, once metastatic, cSCC displays considerable aggressiveness leading to the death of affected individuals. No consensus has been reached as to which features better characterize the aggressive behavior of cSCC, an achievement hindered by the high mutational burden caused by chronic ultraviolet light exposure. Even though some subtypes have been recognized as high risk variants, depending on certain tumor features, cSCC that are normally thought of as low risk could pose increased danger to the patients. In light of this, specific genetic and epigenetic markers for cutaneous SCC, which could serve as reliable diagnostic markers and possible targets for novel treatment development, are currently searched for.

Cutaneous SCC (cSCC) develops as a consequence of the unrestricted proliferation of epidermal keratinocytes, preferentially in the interfollicular epidermis. Its appearance is strongly associated with the development of precursor lesions, namely actinic keratoses, signs of chronic sun damage, which result from the proliferation of atypical epidermal keratinocytes. Most precancerous lesions will not progress to cSCC tumorigenesis, but simply persist or may even regress. Even so, they pose an increased risk of neoplasia and should be treated accordingly [1].

Cutaneous SCC, the second most common type of skin cancer, is considered highly curable, because its metastatic rate is quite low (1–5% of cases) and surgical removal of the affected tissue is usually very effective in treating this form of cancer. This depends of course on the gravity of said cSCC, as once metastatic it usually displays a rapacious behavior [2]. No consensus has been reached as to which features better characterize the aggressiveness of cSCC. Some subtypes (adenosquamous, desmoplastic) have been recognized as high risk variants, but, depending on certain tumor features (size, location, depth, etc.), cSCC that are normally thought of as low risk could pose increased danger to the patients. As a result of this uncertainty, molecular markers are being searched for as reliable biomarkers for cSCC and possible targets for novel treatment development [3].

An overwhelming number of epidemiological and experimental investigations have deemed cumulative exposure to ultraviolet (UV) radiation as the main environmental risk factor for the pathogenesis of cSCC [4][5]. Apart from UV radiation, inherited genetic conditions (xeroderma pigmentosum, albinism, epidermolysis bullosa), human papillomavirus (HPV) infections, severe arsenic exposure, chronic immunosuppressed state (organ transplantation) or precancerous lesions (such as actinic keratosis) are recognized as predisposing factors in the development of cSCC [6][7][8]. Of the three subtypes of UV radiation (A, B, C, distinguished by wavelength), only UV-A and UV-B are considered clinically relevant for the pathogenesis of skin cancer, because UV-C is absorbed entirely by the atmosphere. The daily dosage of UV-B is much lower than UV-A, however, UV-B is far more dangerous, because it is strongly absorbed by the cellular nucleus, and proteins in the epidermis, thus exerting its effect on the genetic material of epidermal keratinocytes, from which cSCC originates (Figure 1). UV-B is also responsible for the majority of sunburns. Upon stimulation by UV exposure, melanocytes from the basal layer of epidermis act to absorb UV by undergoing melanogenesis, in which they produce the photoprotective pigment melanin that is also distributed to keratinocytes. As a result of this, the incidence of skin cancer is much lower in individuals with darker skin phenotypes, which possess higher levels of photoprotective pigment [9]. However, the protection is prone to failure in case of repeated exposure to intense UV radiation, thus, cutaneous damage will appear, at first in the form of a sunburn. UV-B rays directly induce DNA lesions (misbonding of two pyrimidines, either thymine or cytosine, within the same DNA strand), because the wavelength of this specific radiation corresponds to the absorption spectrum of the genetic material. As such, UV-B photons are directly absorbed and lead to formation of cyclobutane pyrimidine dimers and pyrimidine 6-4 pyrimidone photoproducts, which left unrepaired become mutagenic [7][10]. In contrast to UV-B, the exact role of UV-A in cutaneous carcinogenesis is not clearly understood. For a long time, it was considered that UV-A has a minor role in skin cancer development, because the photons are not directly absorbed by DNA. However, researchers have discovered that UV-A causes indirect damage to DNA by the generation of reactive oxygen species, crosslinks between DNA and proteins and even the direct formation of single-strand DNA breaks or cyclobutane pyrimidine dimers [11]. Epidemiologic studies also seem to support these harmful effects, and it has been reported that a single indoor tanning session, during which UV-A radiation emission is substantially higher than that from natural sun [12], can increase the risk of developing cSCC by 67% [13]. In light of these findings, alternative pathways that lead to skin carcinogenesis are currently being searched for, to understand the mechanisms behind UV-A induced mutations [7].

Due to the fact that UV radiation, regardless of its natural or artificial origin, is considered to be the main environmental risk factor in the etiology of cSCC, and also because, in early stages, cSCC can be cured with good prognosis, this type of cancer represents an ideal candidate for combating by means of primary and secondary (early detection) prevention [3]. The first steps in the prevention of cutaneous cancer are constantly informing and reminding the public about the dangers that come with exposure to the UV light. This can be carried out through huge promotion of sun creams and campaigns such as the ‘Slip (on a shirt), Slop (on some sunscreen), Slap (on a hat)’ initiative and the following SunSmart campaign in Australia, or the periods of live program (POLP) in Germany [14]. All these programs aim to provide the public with skincare routines that are concentrated on sun protection and exposure to UV radiation. Regular use of sunscreen with an SPF 15 or higher reduces the risk of developing skin cancer by approximatively 40% [15][16]. The next step, secondary prevention of cSCC, is achieved by early observations of the precancerous lesions, in order to identify the first stages of cancer, which, luckily, can be treated with the proper medicine and self-care. This step is reached with the help of public screening campaigns and the monitoring of skin cancer risk groups. For cSCC, the risk groups include patients with skin type I (caucasians), patients who suffer from actinic keratosis (precancerous lesions) and patients who have been previously diagnosed with cSCC [4][17]. The aim of standardizing such groups is to establish a reliable set of prognostic biomarkers, as specific and as sensitive as possible. In addition to this, a set of molecular biomarkers is currently being searched for. 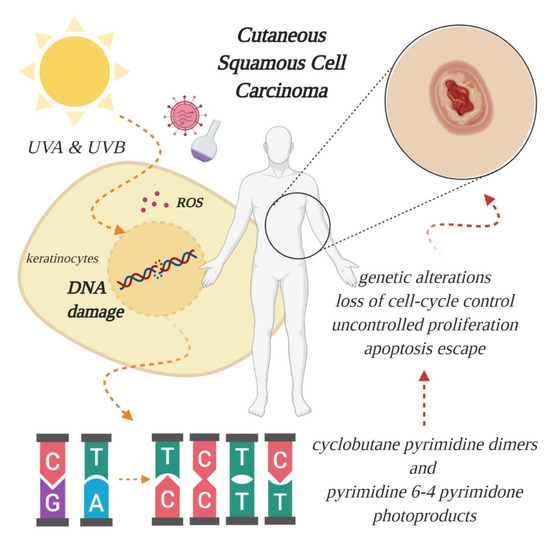 Data from the genomic analyses (next generation sequencing and whole exome sequencing) have identified some genes to be frequently mutated in cSCC, establishing them as driver genes. Apart from TP53, which is one of the first inactivated tumor suppressor genes, a handful of key mutations frequently found in SCC of the skin have been proposed, among them CDKN2A, NOTCH 1, NOTCH 2, FAT1 and RAS family members, involved in different cellular processes, such as cell-cycle control, squamous cell differentiation, survival and proliferation. Additional improvements in genomic analysis techniques have led to the identification of novel
genes that could drive cSCC development, shedding further light on the vast mutational landscape of this specific skin cancer. Alterations of genes involved in keratinocyte differentiation, RAS signaling, chromatin segregation and remodeling, as well as other potential cSCC-associated genes, have been found in independent studies, although a consensus on reliable novel driver genes has not been reached [18][19][20].

Apart from genetic alterations, researchers have also turned their attention to the role of non-coding RNA modifications in cSCC. MicroRNAs (miRNAs/miRs) are non-coding transcripts of about 19–25 nucleotides in length, which regulate gene expression at a post-transcriptional level, by either causing mRNA degradation or blocking translation. In cancer, miRNAs can function as tumor suppressors or oncogenic miRNAs (onco-miRs), depending on the pathway in which they are involved [21][22]. While miRNAs have been heavily studied, and are well understood for their function in gene regulation, long non-coding RNAs (lncRNAs) are less understood. LncRNAs are transcripts longer than 200 nucleotides, without open reading frames, that can interact with DNA, RNA or proteins to regulate gene expression via various pathways [23], and were found to play an active role in carcinogenesis [24]. Dysregulation of miRNAs and lncRNAs’ expression has been shown to impact cell proliferation, resistance to apoptosis, the induction of angiogenesis, the promotion of metastasis and the evasion of tumor suppressors during cSCC development [25][26]; but their functions and molecular mechanisms still remain underexplored.

The standard treatment for cSCC is represented by surgical resection of the affected tissue and the immediate area around the lesion, with various surgical modalities (standard excision, Mohs’ micrographic surgery, curettage and electrodessication or cryosurgery), followed by chemotherapy or radiotherapy for patients with high-risk tumors, such as those who experience local recurrence or metastases. However, this therapeutic method generates lesions of different sizes and depths, which can be difficult to heal, while follow-up treatment has a systemic effect, instead of targeting the specific affected area, thus, weakening the patients’ immune system without guaranteeing full efficiency. Furthermore, regenerative proliferation associated with chronic inflammation and oxidative stress during wound healing has been shown to contribute to skin tumor promotion [27]. As such, novel therapeutic approaches are being searched for, to overcome the current limitations and provide high-risk patients with efficient therapeutic alternatives, potentially increasing their chance of survival and decreasing the heavy financial and emotional burden.

cSCC tumors are heterogeneous and characterized by inherent evolution, propelled by genetic instability, which challenges diagnostics and complicates the development of targeted therapies. While monotherapies, such as epidermal growth factor receptor (EGFR) inhibitors, may prove temporarily successful for patients with locally advanced or regional cSCC, they remain inefficient for metastatic sites [28][29], possibly because they are not radical enough. For instance, a much higher incidence of activating RAS mutations was detected in patients treated with vemurafenib, which hindered the intended repression of mitogen-activated protein kinase (MAPK) signaling pathway (involved in cell proliferation and survival), and rendered the BRAF inhibitor inadequate for cSCC treatment [30]. Consequently, targeting a single molecular signature is unlikely to combat the aggressive behavior of cSCC and yield the desired outcome for the patients, prompting researchers to try and find reliable combinations instead. In this regard, the pivotal signaling routes for cSCC progression could serve as a starting point, by identifying and targeting multiple co-regulators at once. For example, the constitutive activation of RAS signaling pathways is favored by the aberrant expression of both genes and ncRNAs [18][19][20][25][26]. Modulating the expression of several molecular markers in various combinations could inhibit cell proliferation and survival, which may lead to the discovery of novel, efficient and reliable therapeutic approaches for cSCC. Pairing targeted therapy with conventional treatments may also represent a reliable strategy. At the moment, EGFR inhibitors in combination with radiation and chemotherapy have proved efficient against metastatic cSCC [1][31], while the functional restoration of a specific lncRNA in combination with 5-aminolevulinic acid and photodynamic therapy triggered tumor cell death [32].

Cutaneous SCC is one of the most common types of neoplasia in the world, with a growing incidence every year. Due to its high mutational burden caused by cumulative UV light exposure, the identification and validation of specific key driver genes in cSCC has been difficult, however commonly mutated genes have been found and established as reliable markers for this type of skin cancer. The search is still ongoing for novel markers that could stand as therapeutic targets. Despite the progress made, cSCC continues to be lethal if diagnosed in advanced stages. Thus, the elucidation of the molecular mechanisms involved in the pathogenesis and evolution of this type of cancer represents a principal research objective at the moment, as it could lead to the identification of novel therapeutic targets, and to the improvement of patients’ diagnosis and treatment.