Recovery of phosphorus from wastewater

Mined phosphate rock is the largest source of phosphorus (P) for use in agriculture and agro-industry, but it also is a finite resource irregularly distributed around the world. Alternatively, waste water is a renewable source of P, available at the local scale. In waste water treatment, biological nitrogen (N) removal is applied according to a wide range of variants targeting the abatement of the ammonium content. Ammonium oxidation to nitrate can also be considered to mitigate ammonia emission, while enabling N recovery. Different alternatives exist for coupling biological N treatment and phosphate precipitation when treating waste water in view of producing P-rich materials easily usable as fertilisers. Phosphate precipitation can be applied before (upstream configuration), together with (concomitant configuration), and after (downstream configuration) N treatment; i.e., chemically induced as a conditioning pre-treatment, biologically induced inside the reactor, and chemically induced as a refining post-treatment. Characteristics of the recovered products differ significantly depending on the case studied. Currently (year 2020), precipitated phosphate salts are not typified in the European fertiliser regulation, and this fact limits marketability. Nonetheless, this topic is in progress according to potential requirements to be complied by these materials. Integrated approaches for waste water treatment including P recovery must consider significant needs for subsequent agronomic valorisation of the recovered phosphate salts following the paradigms of the circular economy, sustainability, and environmental protection.

1. Phosphorus as an essential nutrient

Phosphorus (P) is an essential element for all living organisms as a constituent of nucleic acids, energy-transfer molecules in metabolism, cell membranes, and body building blocks. Phosphorus is also an irreplaceable nutrient, non-manufacturable nor destroyable. Its shortage limits crop growth and agri-food production [1]. Yet, when P is discharged in excess to aquatic and terrestrial ecosystems, it acts as a pollutant, causing eutrophication and nutrient imbalances. Phosphorus has no significant gaseous phase, so it cannot flow freely in the atmosphere. This is in contrast with the nature of the other essential elements supporting life—carbon (C), nitrogen (N), oxygen (O) and hydrogen (H).

Nowadays, mined phosphate rock is the largest source of P for use in both agriculture and industry. However, this is a finite resource irregularly distributed around the world. This means that P availability is linked to geopolitical considerations that may lead to uncertainties about supplies [2]. In this regard, the creation of (inter)national strategic P reserves has already been suggested to stabilise commodity prices [3] and the European Union (EU) has identified phosphate rock and P as two of the 27 critical raw materials of high importance to the EU economy and of high risk associated with their supply [4].

As an alternative to mined phosphate rock, organic waste and waste water are renewable sources of P, typically available at the local scale. The P present in these waste streams is chemically or organically bound or dissolved as orthophosphate. The recovery of P from secondary streams and its subsequent reuse, either directly or after intermediate processing, represent a major opportunity for exploiting new and more sustainable pathways for producing P fertilisers. Phosphorus has no substitute but can be reused continuously, and thus, it is a good example of a critical resource that can be utilised more efficiently in the circular economy framework to support sustainable growth with less pollution.

Among the procedures allowing for P recovery from waste streams, chemically induced crystallisation / precipitation / mineralisation of the already dissolved phosphate in the form of low soluble salts is one of the most common alternatives. Precipitation is achieved by appropriately supplying metal ions to the liquid phase, typically magnesium, to form magnesium phosphate minerals (MgP; e.g., struvite) [5]; calcium to form calcium phosphate minerals (CaP; e.g., hydroxyapatite) [6]; or iron to form iron phosphate minerals (FeP; e.g., vivianite) [7]. In waste water treatment plants, this kind of process can be implemented at different locations [8] to foster resource recovery by producing a specific P-rich stream while meeting water quality standards of the receiving water bodies. Additionally, these processes may also involve additional benefits linked to overall plant performance and energy balance such as: prevention of uncontrolled formation of scale deposits in pipelines and recirculation pumps; improvement in sludge dewaterability, allowing for producing a dryer solid product, which is advantageous from the point of view of subsequent transport and thermal processing; and reduction in P backflows.

Biological N removal (BNR) is typically applied to reduce the ammonium content in waste water through its transference to the atmosphere as dinitrogen gas. Origin of the waste water—either from municipal, industrial or agricultural sources—will determine its composition, and thus, treatment particularities. In this context, treatment based on the combination of autotrophic nitrification plus heterotrophic denitrification has commonly been considered. In recent years, the fully autotrophic treatment, based on the combination of partial nitritation and anaerobic ammonium oxidation (anammox) is attracting the interest of the water industry as a more energy-efficient strategy [9]. Some encouraging reasons are the lower energy demand for aeration in partial nitritation and there being no need for an organic C source in anammox (which favours its integration with the anaerobic digestion process to produce biogas as a renewable energy source). Alternatively, nitrification can be applied individually in view of converting ammonium to nitrate, thereby mitigating ammonia gas emission from storage facilities and enabling N recovery from high loaded waste water streams [10]. Phosphate precipitation can be applied before (upstream configuration), together with (concomitant configuration), and after (downstream configuration) biological N treatment; this is chemically induced as a conditioning pre-treatment, biologically induced inside the reactor, and chemically induced as a refining post-treatment [11]. Some potential targets to be approached are: lowering the consumption of energy and chemical reagents, lowering the treatment cost, minimising the risk of toxicity for the microorganisms involved in the biological treatment, and recovering new valuable and marketable high-quality products in the framework of the circular economy. Phosphorus and organic carbon contents are the primary factors to be taken into account when assessing the characteristics of the precipitated phosphate salts in view of being used as agricultural fertiliser, or as a by-product in the P-fertilisers industry. 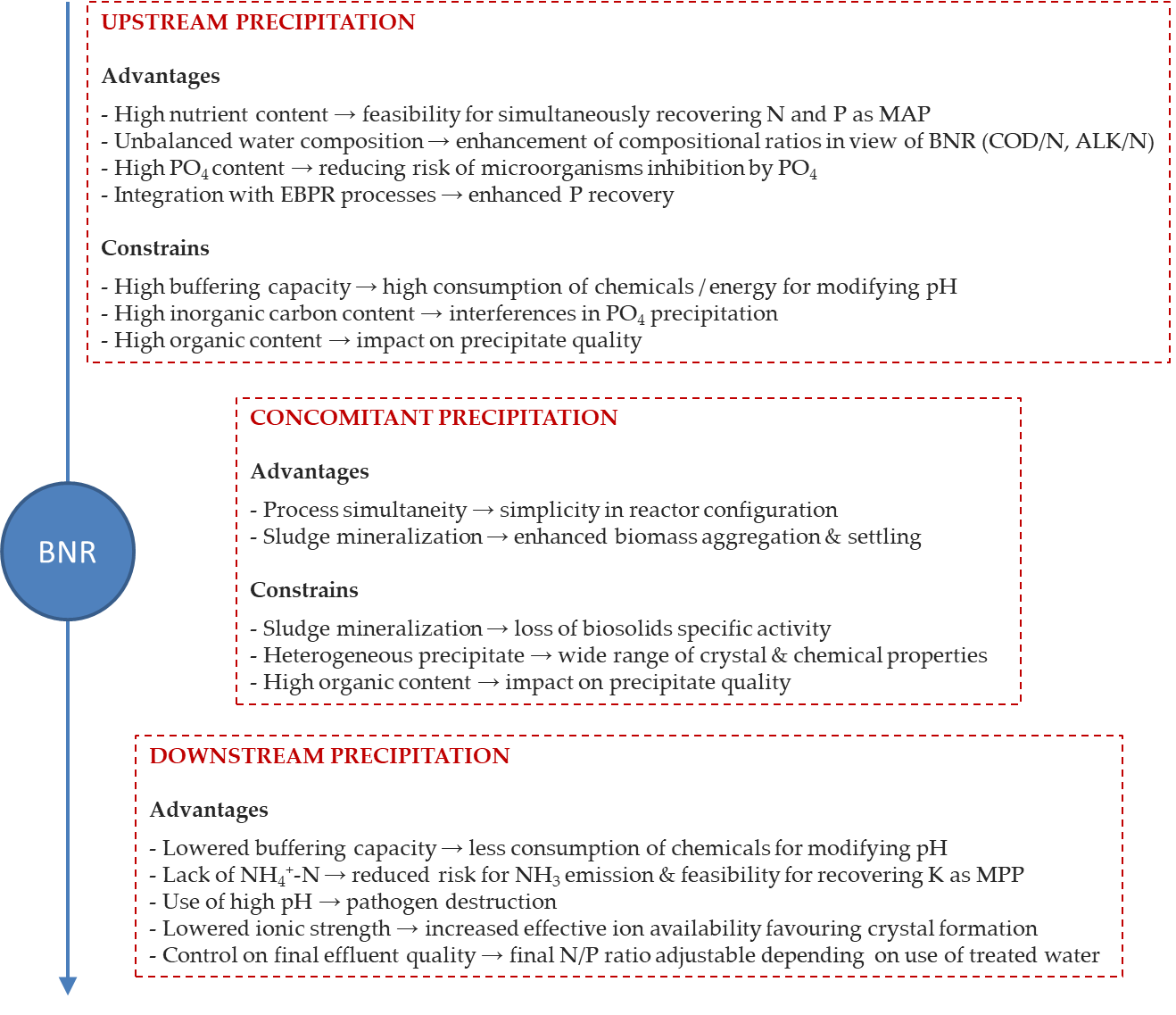 When reviewing the scientific literature on the basis of publications appeared in journals indexed in the database Science Citation Index Expanded (Web of Knowledge; Clarivate Analytics, USA), clearly, there is an upward trend in the number of publications dealing with the topic of P recovery from waste water. According to the growing interest in P recovery from waste streams, some critical literature reviews and comparative technology assessments were recently published. These papers analyse issues such as the principles of phosphate crystallisation, the by-product sources being processed, laboratory feasibility studies, available technologies at pilot- and full-scale, complementary pre-treatments, related environmental and economic aspects, remaining challenges to be addressed, and fertilising properties of the recovered products [12,13,14,15,16,17,18,19,20,21,22,23,24].