For the time being, the widely known and used desalination technologies are reverse osmosis (RO), nanofiltration (NF), electrodialysis (ED), multistage flash distillation, and multiple-effect distillation. RO contributes about 65% of total installed desalination capacity worldwide [1]. The handling/treatment of the concentrated brine byproduct, on the other hand, is a key challenge in the use of RO desalination. The recovery rate of industrial RO desalination systems is normally about 50%. Therefore, over half of the feed water is released as saline into the sea or adjacent regions, with serious environmental consequences [2]. Membrane clogging is another issue with RO desalination. This problem occurs as a result of all strong acids (e.g., HCl or H2SO4) and bases (e.g., NaOH) utilized to adjust pH values or reagents used for cleaning [3]. Electrodialysis bipolar membrane (EDBM) is a technology that integrates bipolar membranes with traditional electrodialysis [4]. EDBM is a promising method for treating and valorizing desalination brines by producing acids and bases, which are valuable compounds in almost any desalination plant. EDBM has also been effectively utilized to produce or purify acids, as well as to adjust pH during fermentation or chemical synthesis in biochemical and food processing [5][6][7]. Furthermore, there are some applications in the removal of heavy metals and exhaust emissions [8][9][10].

Briefly, the advantages of the ED system are: a small and simple pre-treatment is sufficient before the process; low operating pressure; no need for antiscalant (membrane protector); long membrane life; low operating and maintenance costs; effective on many ion forms; efficacious in waters with high ion content (10,000 mg/L TDS); obtaining output product in the order of 90% of the input-product water; 10% concentrate formation (advantage over RO); it is approximately 5 times longer-lasting than reverse osmosis (reverse osmosis, 1–2 years; ED, 8–10 years); two separate collections of concentrated products and ease of recovery; high selectivity for charged compounds. In addition to these huge benefits of EDBM, it has some cons, such as: electricity consumption; the need for expertise, qualified and trained personnel; ineffectiveness on microorganisms and most anthropogenic organic pollutants [11].

Sustainable production of pure chemicals is one of the main goals of EDBM today. Based on this idea, Virag et al. demonstrated the development and optimization of a continuous and simultaneous isolation process for three biophenols based on temperature-shift adsorption. They concentrated the product and waste streams, recycled the solvent in-line, and investigated their impact on the E factor, carbon footprint, and economic sustainability of the process. As a result, they stated that the application of the hybrid process consisting of printing technology and nanofiltration can be extended from complex mixtures to the isolation of other natural compounds [12].

A total of six cycles were made with the intermittent EDBM system from RO-sourced concentrate. The main target is to convert the ions in the concentrate into acid-base ions via cationic, anionic, and bipolar membranes. In the first cycle, the acid-base-forming ions in the concentrate transferred to acid-base units, and when the conductivity value in the concentrate reached 732 μS/cm, the concentrate was discharged, but the acid-base units continued to cycle with the same volume. At the end of each run, concentrate, acid and base, Time-pH change, time-conductivity change, time-pressure change, and time-conductivity-ampere change graphs were obtained. The data of the study results are given in Figure 1, Figure 2, Figure 3, Figure 4, Figure 5 and Figure 6 from the first to the sixth trial. In the experiments, the energy given to the system is 25 V, and the cycle flow rate is 180 L/s. 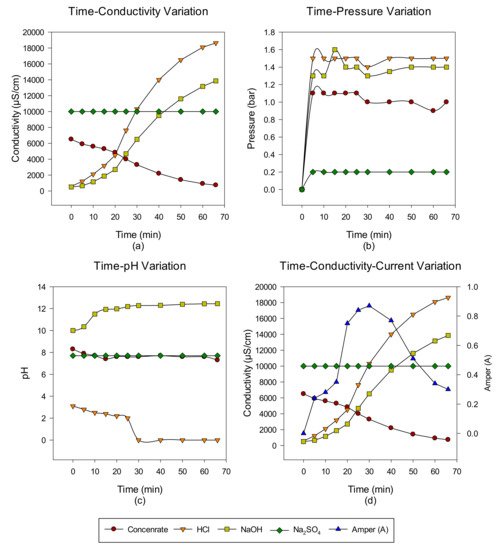 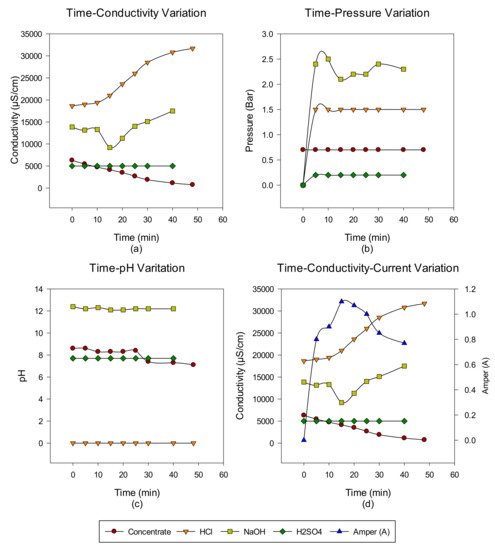 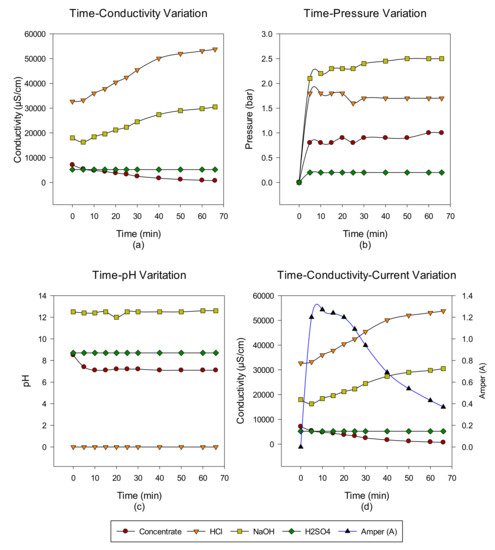 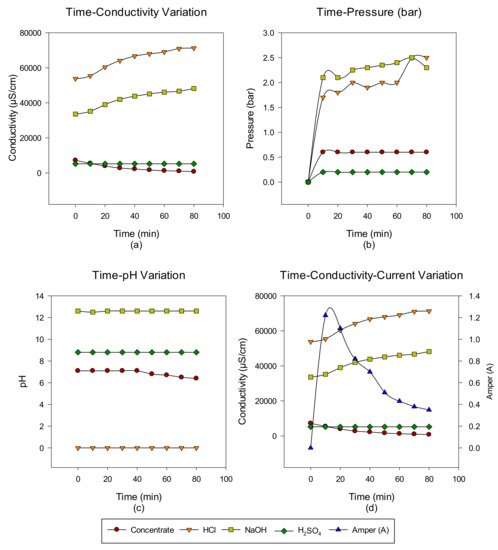 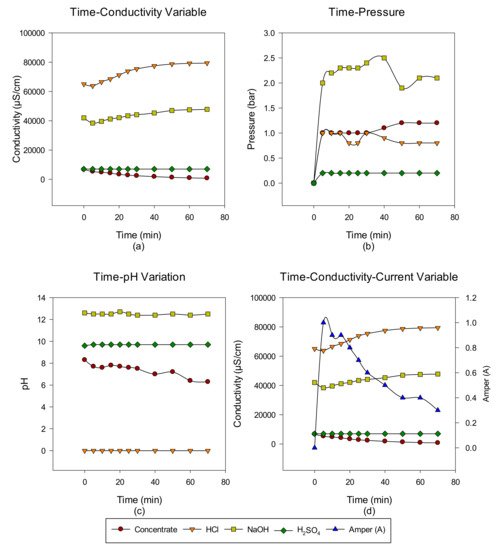 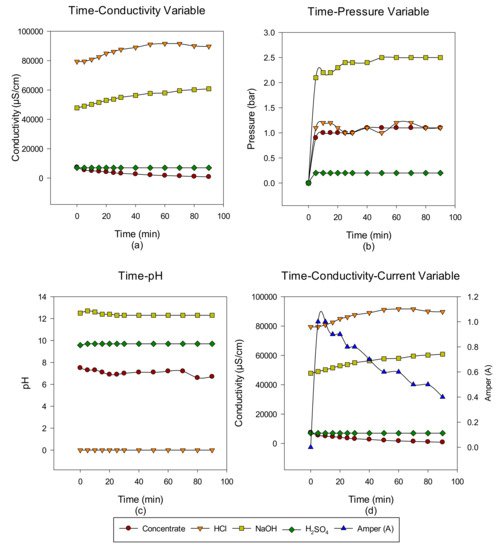 It was observed that the maximum acid-base conductivity (90,000 µS/cm in acid, 60,000 µS/cm in base) was reached with the EDBM system using only the salt in the concentrate. Relating concentrations correspond to approximately 1.44% acids and 2% bases. Quantities were obtained after a 4-h study and continuous circulation of acid-base. At this point, it has been determined that the percentages of acids and bases formed cannot be increased furthermore under the current conditions (with the existing pilot plant with a membrane surface area of 100 cm2, a maximum voltage of 25 volts, and a maximum current of 3 amps).
Even if the acid and base production concentration is low, many treatment plants (including the existing plant) use acids and bases. The acids and bases produced here have the potential to contribute to the system’s own needs. In other words, even if the concentration is low, there may be a potential for use, at least in the existing facility or in nearby businesses. Thus, the opinion that EDBM is one of the best sustainable alternatives in the management of reverse-osmosis concentrate, which is a critical problem for the environment, has been demonstrated by this study.
As a result, it has been determined by the studies that wastewater can be more economically recovered. Concentrate originating from reverse osmosis is a method that can be used for acid and base production, but measures such as salt addition should be taken in order to ensure its economic use. However, it is thought that it will be possible to produce acids and bases at desired concentrations with only reverse-osmosis concentrate, without adding salt, by modifying the study, together with rapidly developing membrane technologies.
The approach presented in this entry has shown that it is possible to dispose of the concentrate formed as a result of reverse osmosis with an environmentally friendly technology. Thus, it is thought that it will be a guide for future studies.