miR-615, a miRNA highly conserved across eutherian mammals. It is involved not only during embryogenesis in the regulation of growth and development, for instance during osteogenesis and angiogenesis, but also in the regulation of cell growth and the proliferation and migration of cells, acting as a tumor suppressor or tumor promoter. It, therefore, serves as a biomarker for several types of cancer and recently has also been found to be involved in reparative processes and neural repair.

miR-615 is a microRNA located within the intron of the Hoxc5 gene (12q13.13) [1], contains two different segments (miR-615-3p and miR-615-5p of 21 nucleotides each) which can perform interference activities and function as regulatory miRNAs. This sequence forms a hairpin or stem-loop where the two sides of the stem contain the corresponding sequences miR-615-3p and miR-615-5p [2]. 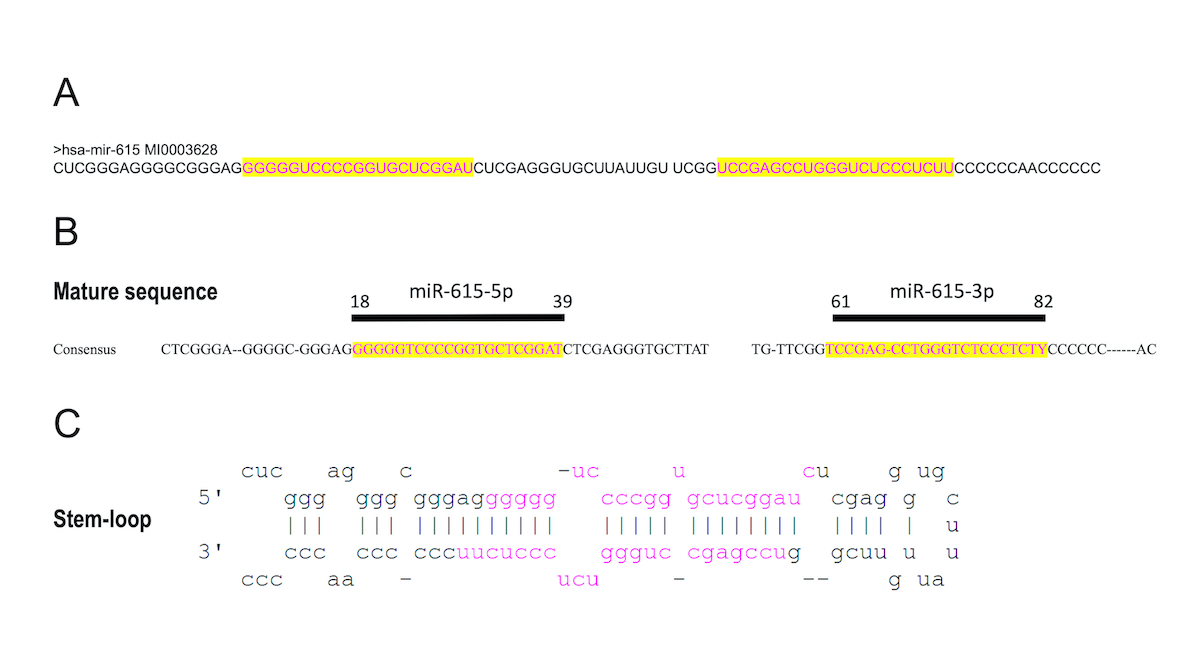 Homeobox genes encode transcription factors that regulate the expression of several genes during embryogenesis[3]. Among them, Hox genes are very well described as specifying the anteroposterior pattern as well as the development of many organs[4]. Within this gene cluster, introns represent a hypothetically rich source of microRNAs (miRNAs). miRNAs are single stranded noncoding 18–25 nucleotide RNAs that post-transcriptionally attenuate gene expression[5]. Among them is miR-615, which is located within the intron of the Hoxc5 gene (12q13.13). miR-615 has a restricted phylogenetic distribution and is absent in non-mammalian tetrapods but highly conserved across eutherian mammals [1], which allows it to contribute in eutherian evolution and development[6].

At present, more is known about the involvement of miRNA-615 in various pathologies than about its physiological function. miR-615 is highly expressed in the mouse embryo and has therefore been involved during embryogenesis in the regulation of growth and development, as suggested by target prediction and transcriptomic analyses. After analyzing miR-615 expression in several human cell lines and tissues, only very few cell lines lacked its expression [6]. The gonads, the kidney and the cerebellum are among the principal tissues in various species in which miR-615 expression occurs.

On the other hand, some studies on cancer cell lines have involved this miRNA in the regulation of cell growth, proliferation and migration [8], with it acting as a tumor suppressor [1] or as a tumor promoter [9][10][11].