Colorectal cancer (CRC) is the world’s third most prevalent malignancy and the fourth leading cause of cancer mortality, with almost 1.4 million new cases and approximately 700,000 deaths reported annually [1]. Considering its prevalence, by 2030, the CRC burden is projected to rise by 60%, to over 2.2 million new cases and 1.1 million deaths [2]. More than two thirds of all patients and about 60% of CRC-related deaths are found in countries with a high or extremely high human development index (HDI) [1][2].
Tocotrienols (T3s), members of the vitamin E family, are natural compounds found in various food sources and exist as four naturally occurring analogues known as alpha (α), beta (β), delta (δ), and gamma (γ). The general chemical structure of tocotrienols is shown in Figure 1. Each analogue has different functional groups that are denoted by R1, R2, and R3 [3]. In α-tocotrienol, R1, R2, and R3 represent methyl (Me) groups, but in β-tocotrienol, R1, R2, and R3 represent Me, hydrogen (H), and Me groups, respectively. In γ-tocotrienol, R1 represents H while R2 and R3 represent Me groups. However, in δ-tocotrienol, R1 and R2 represent the H group while R3 stands for the Me group [3]. The T3s are unsaturated and possess an isoprenoid side-chain, which allows them to efficiently penetrate tissues with saturated fatty layers. The anticancer potential of T3s is only beginning to receive recognition as several mechanistic studies have shown that T3s have unique anticancer properties, which are modulated through several cancer-associated mechanisms and pathways (Figure 1) [3][4], such as inhibition of telomerase activity through suppression of protein kinase C (PKC) activity in cancer cells [5]; and blocked expression of hypoxia-induced vascular endothelial growth factor (VEGF), interleukin-8 (IL-8), and cyclooxygenase 2 (COX-2), which play critical roles in cancers as these act as autocrine growth factors for carcinogenesis and tumor neovascularization [6][7][8]. On the contrary, T3s are reported to enhance the expression of p21 and p27, both known to cause cell cycle arrest [9]. In addition, T3s can induce apoptosis in cancer cells through several mechanisms, which includes inhibition of the nuclear factor-κB (NF-κB) pathway and its regulated gene products [10] as well as regulation of both intrinsic and extrinsic apoptotic pathways by modulating the caspase cascades, expression of B cell lymphoma 2 (BCL2), BCL2-associated X protein (BAX), and tumor necrosis factor-related apoptosis-inducing ligand (TRAIL) by upregulating the expression of death receptors (DRs) [11][12]. 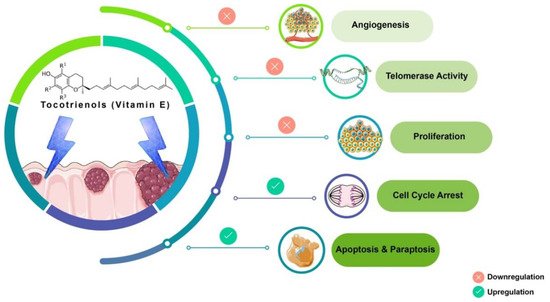 Figure 1. Anticancer actions of tocotrienols. Tocotrienols have been reported to exert anticancer effects by several mechanisms, such as induction of cell death via apoptosis and paraptosis in cancer cells, cell cycle arrest, inhibition of proliferation, suppression of the expression of the human telomerase reverse transcriptase (hTERT) in cancer cells as well as inhibition of angiogenesis. [α-tocotrienol: R1 = Me, R2 = Me, R3 = Me; β-tocotrienol: R1 = Me, R2 = H, R3 = Me; γ-tocotrienol: R1 = H, R2 = Me, R3 = Me; δ-tocotrienol: R1 = H, R2 = H, R3 = Me.
Tocotrienol is a form of vitamin E that is gaining recognition for its immense benefits against various types of cancers and other diseases. The anticancer effects of T3s shown in Figure 1 only represent a small portion of the overall T3-based research. The current state of information on this lesser-known type of vitamin E calls for more investigations to garner more scientific evidence that could further strengthen T3s’ many functions and attributes in various experimental models.

Inherited CRC is now acknowledged as a significant factor in the development of this disease. Genome sequencing-based diagnosis estimates that one-third of CRC patients appear to have familial colorectal cancer (FCC) as a part of their pathogenesis [13]. The initiation of CRC arises from the epithelial tissue due to the accumulation of genetic modulations in specific oncogenes and tumor suppressor genes (TSGs). In the evolution of sporadic CRC, two primary mechanisms of genomic instability have been identified. The first is chromosomal instability (CIN) caused by a cascade of genomic alterations involving activating oncogenes like KRAS and the inactivation of TSG like p53, DCC/SMAD4, and APC. The second, known as microsatellite instability (MSI), is caused by hypermethylation of the promoters of the DNA mismatch repair genes MLH1 and/or MSH2, as well as secondary mutation of genes with coding microsatellites, such as transforming growth factor receptor II (TGF-RII) and BAX [14][15][16]. In comparison, germline mutations in the defined genes may lead to inherited CRC. Those mutations can be in the tumor suppressor gene APC on chromosome 5q as in familial adenomatous polyposis (FAP) or mutated DNA mismatch repair genes in hereditary non-polyposis colorectal cancer (HNPCC) [17][18]. In this systematic scoping review, differentially expressed candidate proteins in response to γT3 or δT3 treatment were retrieved to identify the molecular mechanisms through which these T3s isoforms modulate anticancer effects.
The 16 CBs (BIRC3, BIRC5, CASP3, CASP8, CASP9, CCND1, CDKN1A, CDKN1B, CTNNB1, JUN, MMP9, MYC, PARP1, RELA, VEGFA, and WNT1) short-listed in this study formed three prominent clusters that were part of the apoptotic, transcriptional misregulation, or cancer progression pathways (Figure 2). All three pathways are interlinked and are crucial with respect to anticancer mechanisms. Hence, it is highly likely that the 16 CBs play a pivotal role in mediating anticancer mechanisms induced in human CRC cell lines exposed to γT3 or δT3. A number of the CBs have been reported to play important roles clinically in the carcinogenesis of patients with CRC (Table 1).
Table 1. Summary of clinically relevant genes and proteins modulated by tocotrienols in human colon cancer cell lines.

Upregulated; CB: candidate biomarkers; CRC: colorectal carcinoma; LNM: lymph node metastasis; MSI: microsatellite instability; T3s: tocotrienols. Italics refer to the gene name of the protein.
This was evident when these CBs were analyzed using another bioinformatics software, i.e., Cytoscape, which shows the connections or interactions between these biomarkers (Figure 2). In this analysis, 10 of the CBs (CASP3, CASP8, CASP9, CCND1, CDKN1A, CTNNB1, JUN, MYC, RELA, and VEGFA) were found to play critical roles in the protein–protein interactions (PPIs) as there were correlated interactions between these CBs. We observed between 12 and15 engagements marked with either of these CBs, being the protein that exerts an effect (source) or affected by the CBs’ action (target) (Figure 2) [31]. 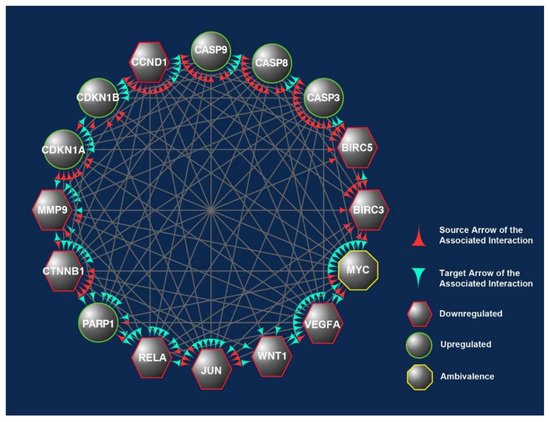 Figure 2. The overlapped targets of the 16 candidate biomarkers (CBs) identified in this study were populated according to their engagements using Cytoscape, an online bioinformatics tool. The protein–protein interactions (PPIs) between these CBs formed a prominent network. The CBs in the hexagons and circles are significantly downregulated or upregulated in human CRC exposed to γT3 or δT3. In contrast, the CB in the octagons is a biomarker that did not show significant changes. The green and red arrowheads reflect the interactions between these CBs. The red arrowheads indicate source CBs protein that can exert stimulatory (circles) or inhibitory (hexagons) or no effects (octagons) on target CBs (green arrowheads).
Caspase-3 (CASP3) is the only CB reported in five independent studies as overexpressed following exposure to T3s. So, therapeutic targeting of caspase-3 may boost cancer cell susceptibility to chemotherapy and irradiation while simultaneously inhibiting invasion and metastasis. Using the CRISPR technology, Zhou et al. [32] established a caspase-3 knockout (KO) human CRC cell line where the caspase gene was knocked out in the HCT116 human CRC cell line (CASP3KO). The authors reported that the CASP3KO-HCT116 cells were less clonogenic, less invasive, and more susceptible to mitomycin-C treatment than the wild-type control cells [32]. In addition, the CASP3KO-HCT116 cells proliferated at a similar rate as the control cells in vivo and were more sensitive to radiation. When administered subcutaneously or intravenously, these cells were less prone to pulmonary metastases than the wild-type HCT116 cells. Deletion of the CASP3 gene also generated lesser EMT phenotypes on a molecular level [32]. In a clinical study, irradiated CRC cells undergoing apoptosis and necrosis were reported to produce significantly higher levels of cleaved caspase-3 (CC3) [19]. The immunohistochemistry staining revealed that the colorectal tumor tissues also showed significantly higher expression of CC3 compared to the peri-tumoral tissues. The authors concluded that high CC3 levels were related to poor prognosis [19]. When the roles of caspase-3 and CC3 were analyzed using the colorectal cancer pathway provided by the KEGG database [33], there was substantial evidence to show that suppression of caspase-3 or increased expression of CC3 suppressed apoptosis, and this could be one of the reasons why this correlates with poor prognosis (Figure 3F). 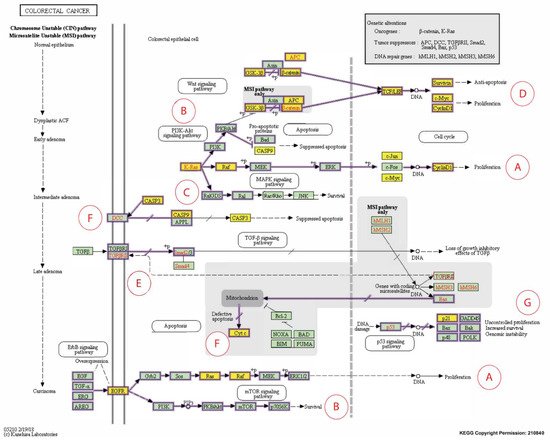 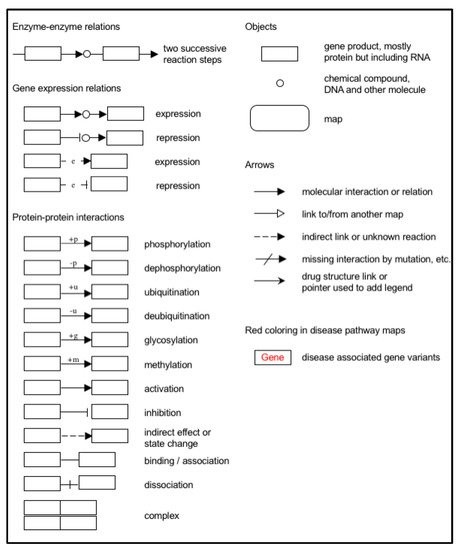