The paper presents the test experiment to investigate one of UNESCO’s world heritage objects, an archaeological site in the Naryn-Kala citadel (Derbent, Republic of Dagestan, RF) hidden under the ground surface. The function of the site could be revealed by the muon radiography studies. Several nuclear emulsion detectors were exposed for two months inside the site at a depth about 10 m from the modern surface. The use of nuclear emulsions as probing radiation detectors combined with the potential of modern image analysis methods provides for a uniquely high resolution capacity of recording instrumentation and 3D reconstruction of the internal structure of the investigated object. Here we present short descrption of muon radiography method, the test experiment, data analysis details and the first results.

Muon radiography is a method of nondestructive inspection based on `raying' an object with natural muon radiation of cosmic origin and registration of the radiation transmitted through the object. Absence of strong interactions, large rest mass and velocity close to the speed of light provide the high penetrating power of muons, that along with a large flux of these particles at the earth's surface make them an effective tool for sensing large natural and industrial objects. The method is intended for probing sizable solids and constructions by analysis of absorption and scattering of cosmic muon fluxes on their way through the substance of the investigated object [[1][2]].

One of the most known latest muon radiography experiments is the study of Khufu pyramid in 2016–2017 within the framework of the ScanPyramids project [[3]]. The result of the studies performed with emulsion track detectors was the discovery of a new unknown chamber, which is the first great breakthrough in the pyramid investigation since the XIXth century, without any damage to the construction.

Currently, in experiments by the method of muon radiography, both electronic and emulsion track detectors are used (Figure 1). Emulsion detectors [[4][5]] have a number of advantages, with the main one being a high angular resolution. In this connection, none of the currently known detectors of elementary particles provide a spatial resolution in the way that the nuclear emulsion does: with a grain size of 0.3 – 1 micron, the grain deviation from the restored trajectory of the particle does not exceed the average value of 0.8 microns, and under certain conditions can reach 0.2 microns. 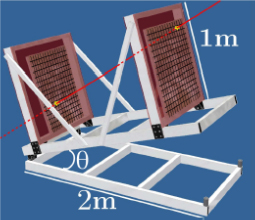 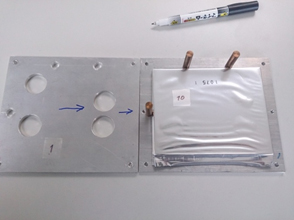 When using natural probing radiation, that is the flux of atmospheric muons, the detector is placed on a side or below the studied object. The number of muons passing through the object depends on material of the object under study and the length of the muon path within it. Muons with a range in the substance greater than their path lengths in the tested object reach the detector. The registered particle tracks, which are chains of developed grains of silver halides ionized by a passing charged particle, allow restoring the spatial trajectory of this particle with accuracy of several milliradians (which means a spatial resolution about 10 m at the distance of 1 km). Each registered muon is characterized by the values of azimuth and zenith angles of its trajectory relative to the axis normal to the detector plane. The angular distributions of muon tracks registered by the detector aimed at the object indicate absorption and scattering features of these probing particles and, therefore, the presence in this area of zones with different material properties. The use of several detectors enables obtaining a 3D tomogram of the internal structure of the object under study.

In spring 2018 authors carried out experiment for investigation one of UNESCO’s (United Nations Educational, Scientific and Cultural Organization) world heritage objects, an archaeological site in the Naryn-Kala citadel (Derbent, Republic of Dagestan, Russian Federation). The object of study was an underground cross-shaped dome construction from local shell-limestone oriented to the cardinal directions (Figure 2). In some historical and reference literature this construction is mentioned as an underground reservoir for water, as it was in XVII–XVIII centuries (see, e.g., reference [[6]]). At the same time, it was suggested that this construction was originally an early Christian church established during V–VI A.D, [[7][8]] or a Zoroastrian temple of fire [[9]]. The function of the site could be revealed by the muon radiography studies. Several nuclear emulsion detectors were exposed for two months inside the site at a depth about 10 m from the modern surface. 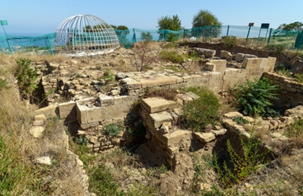 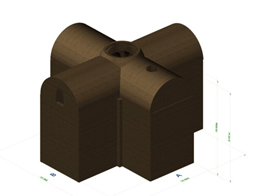 Figure 2. (a) The wire frame of the dome of the investigated building in the Naryn-Kala citadel. (b) Computer reconstruction of underground building.

The material characteristics and thickness of the construction walls are not known, and a preliminary simulation of muon passing through the building and their registration by emulsion detectors was carried out with several different values of wall thickness and density. In the calculations, loam of density 1.78 g/cm3 was taken as soil material; sandstone of two density options (2.00 g/cm3 and 2.65 g/cm3) was taken as wall material. Simulation of the muon flux passage for the test experiment was carried out with consideration of the emulsion detector design based on Geant4 software package [[10]].

where φ and θ are azimuth and zenith angles.

The simulation was carried out for two values of wall material density (2.00 g/cm3 and 2.65 g/cm3) and two values of wall thickness (0.5 m and 1.5 m). The muon decays and the angular dependence of their flux were taken into account, and calculations were made for particles with incident angles . The distributions in Figure 3 show that the change of wall thickness in the analyzed range has the largest impact on the number of passed particles, since the threefold increase in the wall thickness (from 0.5 m up to 1.5 m) changes the degree of absorption significantly more than the change in the density of material by 25%, from 2.00 g/cm3 up to 2.65 g/cm3. 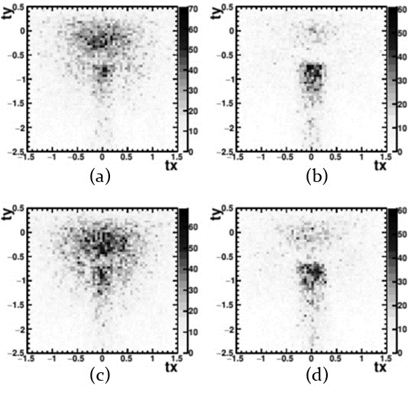 The test irradiation of emulsion detectors in the Naryn-Kala citadel lasted for two months. After exposition the detectors were moved to the surface and disassembled; the nuclear emulsions were developed and processed. Scanning of the emulsion layers and online processing of the obtained images was carried out on the automated scanning complex PAVICOM [[11]]. Further offline data processing was performed with the FEDRA (Framework for Emulsion Data Reconstruction and Analysis) package [[12]] providing for reconstruction of tracks, the relative position of emulsion plates in space and the track reconstruction in the entire volume of the scanned data.

As an example of the result of processing the detector data from the test experiment, Figure 4 presents experimental angular distribution of the muon flux in one of the exposed detectors. The distribution features a peak with displacement to the region ty ~ −0.4 which can be explained by the influence of the detector efficiency function. There is a certain feature of the emulsion layers processing, which is that the effectiveness of the tracks selection depends on the incidence angle of the particle. The maximum detection efficiency corresponds to the perpendicular to the detector plane. Muons from the vertical direction come to the detector at an angle of 45°, at which the registration efficiency is lower. Therefore, the peak of the angular distribution of muons in the detector is shifted. Some heterogeneity of the distribution at ty>0 indicates the presence of unevenness density at the ground level and underground. From the comparison of the obtained experimental distribution with the calculated one, it can be determined that this result is the closest to the simulated variant (b) in Figure 3, with the relevant wall parameters L = 1.5 m and ρ = 2.65 g/cm3. Since our model calculations were based on a hypothetical and simplified model of the object, some discrepancy between the simulation results and experimental data suggests that the real structure of the building is more complicated. We will conduct further research on the characteristics of this structure.

Figure 4. Distribution of the recorded muon flux in the (tx, ty) coordinates.

Anonymous
02 May 16:47:37
0
Congratulations on your valuable work
View more