Healthcare-associated infections (HAIs) are nosocomial-acquired infections (hospital-acquired infections) that are not present in the patient before their hospitalization [1][2]. HAIs can occur in various wards during treatment; they are most often associated with hospitalization in intensive care units (ICUs). In ICUs, patients have a 5 to 10 times higher risk of acquiring an HAI due to both intrinsic (immunodeficiency) and extrinsic factors (the administration of medical devices). In addition, an ICU is often an epicenter of microorganisms with multi-drug resistance (MDR) [3].HAIs typically occur from 48 h to 30 days post-treatment [4][5].

HAIs typically occur from 48 h to 30 days post-treatment [4][5]. In Europe, the European Centre for Disease Prevention and Control (ECDC) created in 2005 “The Healthcare-Associated Infections Surveillance Network”, and in the USA, the World Health Organization (WHO)’s section on prevention of hospital-acquired infections published their practical guide (second edition) in 2012. The WHO have stated that HAIs are a global phenomenon responsible for a high amount of morbidity and mortality all over the world [6]; they are a major problem not only in developing countries but also in the highly developed countries in Europe [4][7][8]. The ECDC reported that around 3.2 million patients acquired HAIs in European Union (EU) countries, and among them, 37,000 mortalities have been registered every year [9]. These infections also cause economic losses in the hospital sector, which have been increasing every year. A survey performed by Duszynska et al. (2020) revealed that one in five patients are diagnosed with a device-associated HAI, which leads to an additional financial burden of over 10,000 euros per patient [10]. Hopmans et al. (2020) conducted a biannual point-prevalence surveillance on HAIs from 2007 to 2016 and identified a decrease in the incidence of HAIs in hospitals in the Netherlands, specifically in surgical site infections (SSIs) and urinary tract infections (UTIs). This survey showed a reduction in the mean length of hospital stay by 3 days, but the usage of antibiotics increased from 31% to 36%. In this way, they demonstrated the importance of surveys to know the impact of ongoing treatment procedures to help and modify those procedures to provide a high standard of healthcare [11].

Several studies have identified that the kind of microorganisms causing an HAI depends on the type of medical implant inserted into the patient [12][13]. Additionally, it is necessary to determine precisely whether the patient got the infection before admission to the hospital or became infected during hospitalization. HAIs only include infections that do not appear in patients until 48 h after hospitalization. Evidence that the patient is infected are symptoms such as fever, chills, lethargy, cough, difficulty breathing, abdominal pain, and stool problems. Sepsis and inflammation may also be included among the common symptoms [14][15]. CVCs are considered to be a major source of bloodstream infections (BSIs) in hospitals, especially in patients with permanently impaired immunity. Their insertion is an invasive method and is used in both adult and pediatric patients [16]. Additionally, long-term intestinal problems in children also require the insertion of a CVC to provide parenteral nutrition, but this is frequently accompanied by infections resulting in an increased rate of morbidity and mortality [17]. Another type of common nosocomial infection caused by catheters in hospitals is CAUTI. Removal of the urinary catheter in the shortest time possible is a basic step to prevent infections. However, adhering to this rule in hospitals is very difficult. Long-term catheterization should only be recommended in very justified cases. From this perspective, identifying the risk factors for CAUTI is critical [18][19]. Letica-Kriegel et al. (2019), similarly to other authors, observed that when the duration of catheterization increased, the risk of infection also increased. Furthermore, they confirmed that approximately 12% of patients with an indwelling catheter developed CAUTI within 30 days. Some risk factors are predominantly associated with CAUTI [20][21]. The above-mentioned study defined two main hazards, i.e., sex (female) and those associated with mobility issues [20]. Medina-Polo et al. (2021) determined in their study that a catheter in the upper urinary tract and immunosuppression are the other critical factors contributing to CAUTI caused by MDR bacteria [22]. VAPs as part of intensive care are also particularly dangerous. Li et al. (2018) documented that bacterial contamination was largely observed on devices that were used repeatedly. Therefore, emphasis should be placed on the constant sterilization of intubation equipment used [23]. Patient monitoring can help physicians to detect changes in lung function in a timely manner to reduce the risk of VAP and mortality [24]. The predominant microorganisms isolated from the above-mentioned medical devices are Gram-positive bacteria of S. aureus and S. epidermidis, then enterococci and streptococci. The Gram-negative bacteria include E. coli, Enterobacter spp., Acinetobacter baumanii, P. aeruginosa, K. pneumoniae, and Proteus mirabilis, as well as representatives of the yeast from the genus Candida [25][12][13].The detail list of microorganisms associated with medical devices are described in Table 1. Microorganisms can survive not only in planktonic form, but also they frequently colonize medical devices and form mono- or inter-species communities. Biofilms have subsequently become more resistant to conventional drugs, often resulting in chronic infections in patients [12][26][27][28]. Svensson et al. (2021) noted that a strong biofilm production was significantly associated with recurrent infection [28]. According to a meta-analysis of PubMed and Web of Sciences databases from January 2005 to May 2020 published by Pinto et al. (2021), strong biofilm producers tested in vitro and associated with BSI were strongly represented among the resistant strains. Methicillin-resistant S. aureus (MRSA) was mainly mentioned. Moreover, biofilm producers were also highly linked to BSI persistence. It is of interest that this association was the highest for Candida spp. As for UTIs, multi-resistant E. coli was observed to be the predominant strong biofilm producer. The above-mentioned study clearly proved that biofilms must be assumed to be a BSI and UTI resistance factor [27]. The medical implants are summarized in Figure 1. 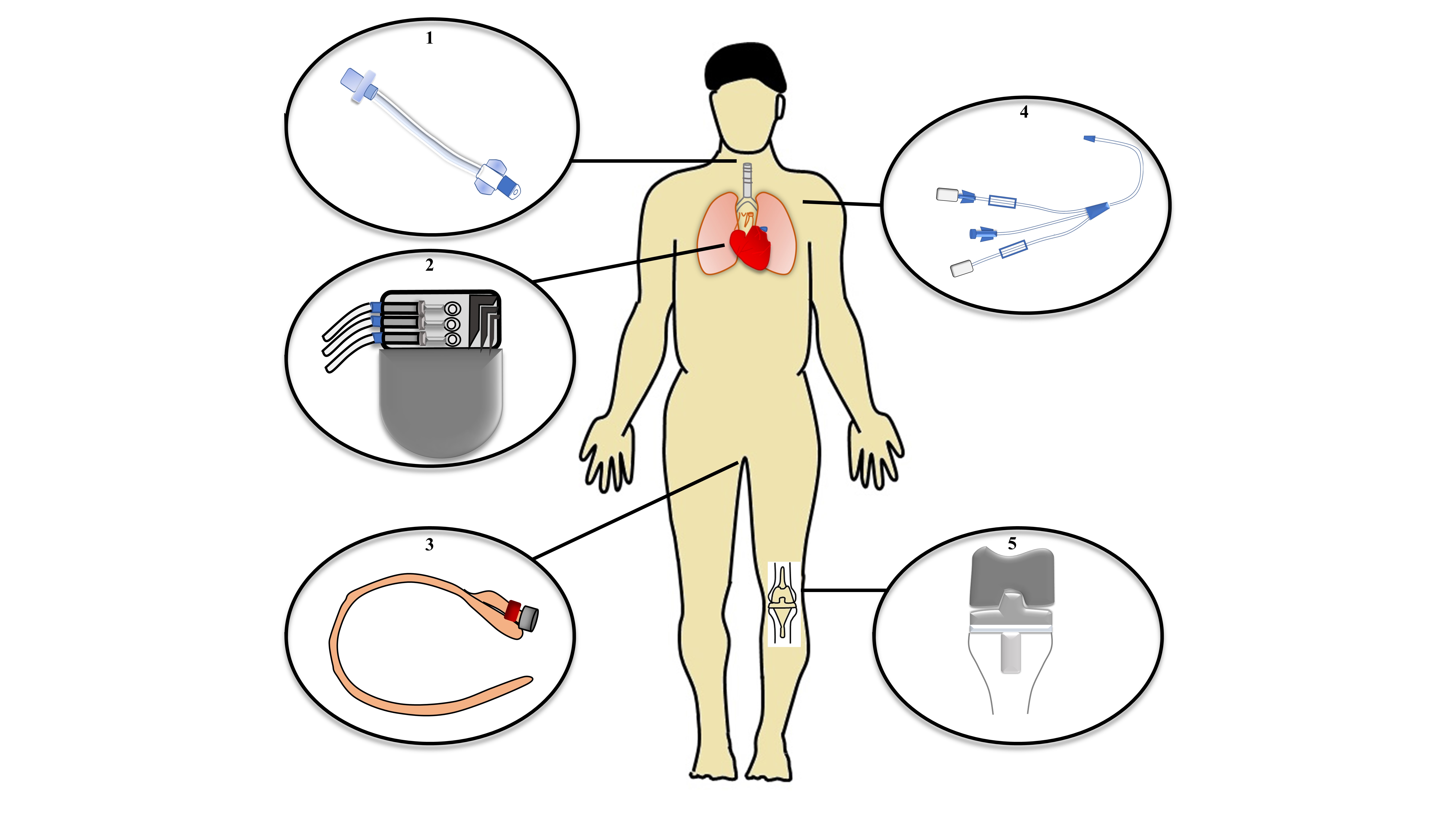 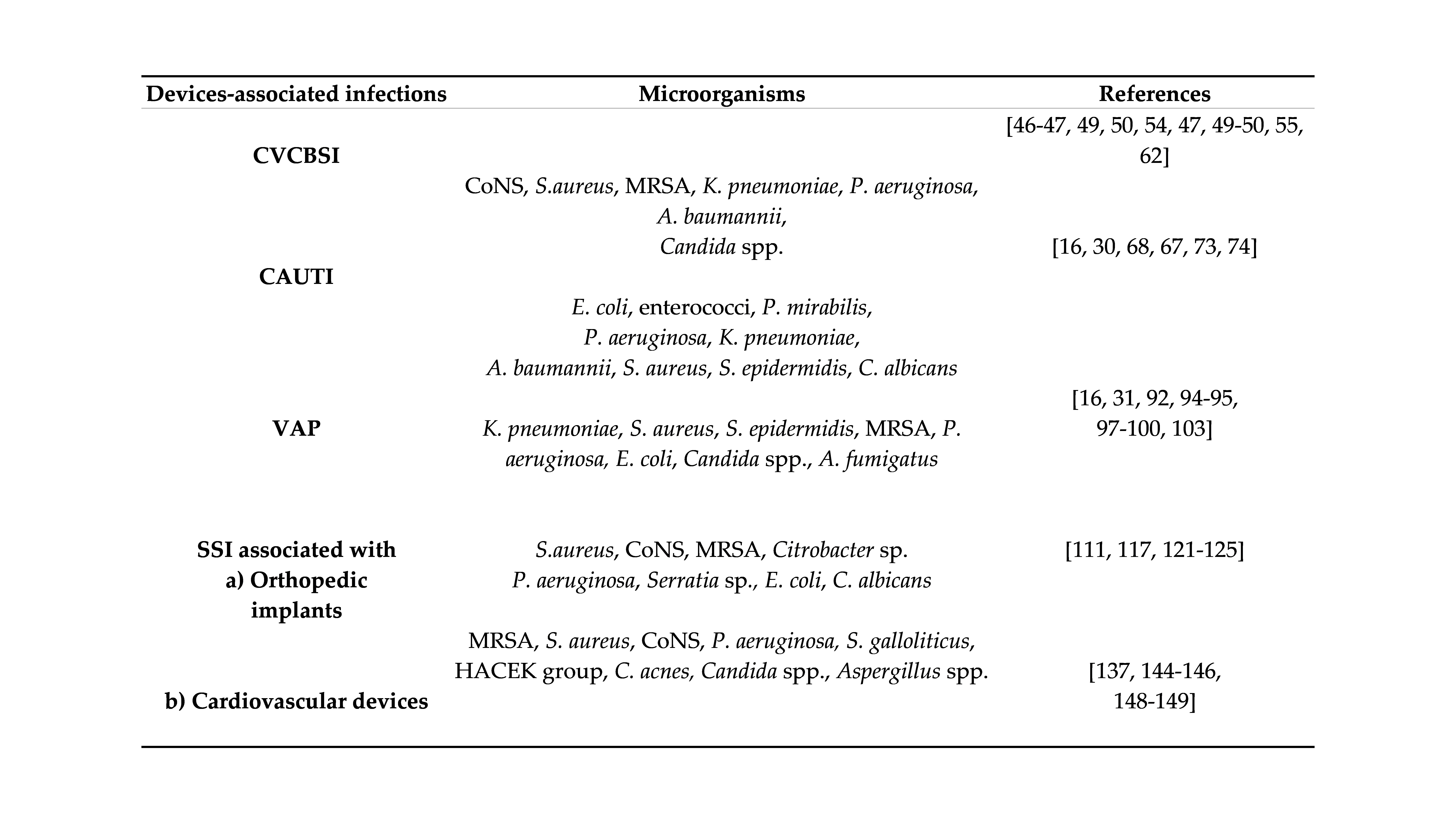 This review concisely summarizes relevant and up-to-date information on HAIs themselves and HAI-associated microorganisms while also providing a description of several useful approaches for the treatment and eradication of HAIs. It is focused on device-associated infections such as CLABSIs including CVCBSIs, CAUTIs, VAPs, and SSIs associated with orthopedic implants and CVDs. Updated information is summarized along with some documents elaborated by the ECDC and CDC. The most relevant microorganisms are mentioned in terms of their frequency of infection associated with medical devices, and they are categorized based on their colonization.Standard care bundles, conventional therapy, and novel approaches against device-associated infections are briefly mentioned as well. An update of information on HAIs could not only be beneficial for medical professionals but also for researchers to have an idea of the available clinical data and research results, and it could be helpful for improving strategies tackling HAIs.