Melanogenesis is a complex process of the synthesis and storage of melanin initiated by tyrosinase, which is synthesized by melanocytes, after it enters the melanosomes. Melanogenesis plays an important role in the formation of different coat colors in mammals. There are two distinct types of melanin pigments: eumelanin and pheomelanin, the proportions of which determine the coat color of the animal.

Melanogenesis is a complex process of the synthesis and storage of melanin initiated by tyrosinase, which is synthesized by melanocytes, after it enters the melanosomes [1]. Melanogenesis plays an important role in the formation of different coat colors in mammals. There are two distinct types of melanin pigments: eumelanin and pheomelanin, the proportions of which determine the coat color of the animal [2][3][4]. The difference in the eumelanin content leads to the formation of different hair types in humans, such as black, brown, light brown, and blond [5]. Previous studies have found that there is lower eumelanin content in those with lighter skin, which is highly sensitive to UV exposure, compared to those with darker skin [6]. Melanogenesis is regulated by several signaling systems, transcription factors, and melanin-related genes [7][8]. MC1R regulates melanogenesis andt was significantly decreased in the skin of a leucistic and blind cypriniform fish (O. daqikongensis, Nemacheilidae) [9]. α-MSH plays an important role in melanogenesis by regulating the proportions of pheomelanin and eumelanin via MC1R [10]. The TYR gene is essential for melanin biosynthesis in melanocytes; it was differentially expressed in black and white feather bulbs, indicating that it plays an important role in the melanin formation of feather bulb color in the plumage [11]. Several studies have suggested that the expression of TYR was related to the content of eumelanin; the overexpression of TYR could increase eumelanin content in mammals [12]. Eumelanin content was related to TYR activity. Previous studies have demonstrated that TYR activity in black bone sheep was significantly higher than that in non-black bone sheep [13].
GNAI2 (G protein subunit alpha i2), belonging to the G protein family, is one of the key genes involved in melanogenesis. G proteins consist of three subunits, α, β, and γ, and are signal transducers, which connect receptors to effectors in order to regulate intracellular signaling [14]. G protein-coupled receptors (GPCRs) receive external signals that activate the G proteins to transmit the signal to further regulate the growth and development of the organisms [15]. At present, a large number of G proteins are identified, including Gs, Gt, Gi, and Go [16]. Previous research shows that GNAI2 is mostly involved in cell injury and inflammatory response [17], tumorigenesis [18], hepatic ischemia-reperfusion injury [19], etc. GNAI2 is mainly expressed in immune cells and plays an essential role in regulating cellular viability and migration [20]. In addition, previous studies have found that GNAI2 associated with melanogenesis was identified in the growth process of brindle cattle [21]. However, it remains unclear whether GNAI2 is involved in the formation of rabbits’ coat colors and regulates rabbit melanocyte proliferation and apoptosis.

2.1. GNAI2 Was Differentially Expressed in the Skin of Rabbits with Different Coat Colors

GNAI2 was successfully cloned, and comprised 1068 bp coding 355 amino acids (Figure 1A). To determine whether GNAI2 was involved in the formation of rabbit coat colors, the expression levels of GNAI2 were detected in the skin of rabbits of different coat colors. It was found that the mRNA expression of GNAI2 in the black skin was significantly higher than that in the other skins (p < 0.05), and the lowest expression was detected in the white skin (Figure 1B). Similarly, GNAI2 protein levels were different in the skins of rabbits of different coat colors. The highest GNAI2 expression was found in the black skin, and the white skin had the lowest (Figure 1C). 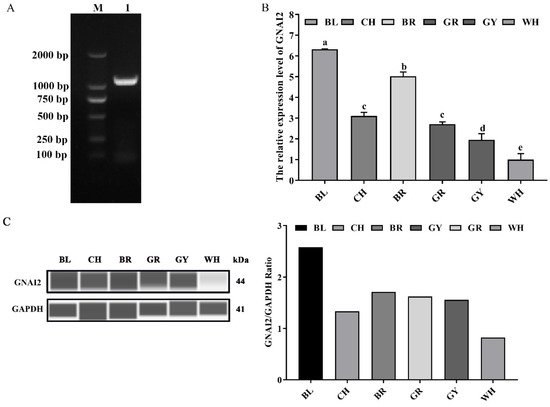 Figure 1. The expression levels of GNAI2 in the skin of rabbits of different coat colors: (A) the rabbit GNAI2 cDNA was successfully cloned. M, DL2000 DNA marker; lane 1, the coding sequence (CDS) of GNAI2; (B) the GNAI2 mRNA levels in the skin of rabbits of different coat colors were determined. Samples were in triplicates and the relative expression levels of the genes were determined using GAPDH as an internal control and the 2−ΔΔCt method. Duncan’s Multiple Range Test was employed to compare the differences across groups. Small letters indicate significant differences among groups (p < 0.05); (C) the GNAI2 protein expression in the rabbit skin was measured using the Wes assay. Differential expression of GNAI2 in Rex rabbits with different coat colors was calculated using the relative expression ratio of GNAI2/GAPDH. BL, black; CH, chinchilla; BR, brown; GR, gray; GY, gray-yellow; WH, white.

2.2. GNAI2 Protein Was Mainly Localized in the Cytoplasm of Melanocytes 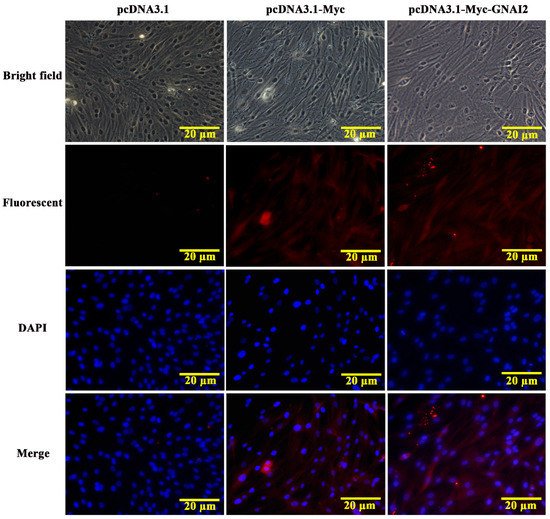 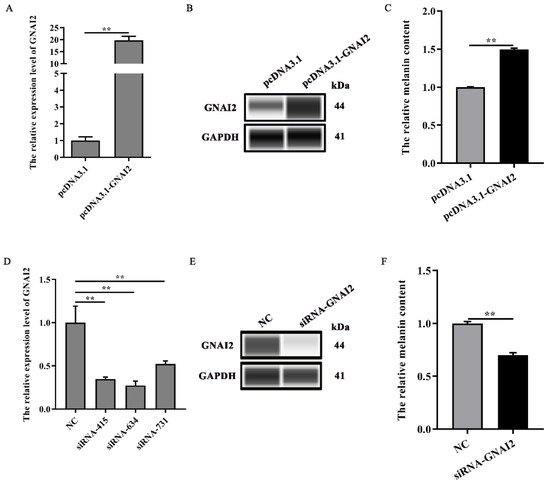 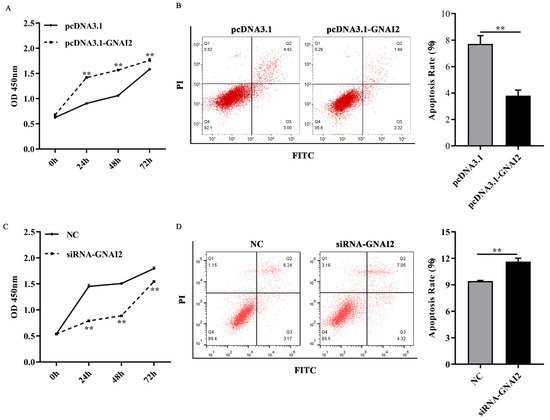 2.5. GNAI2 Overexpression and Knockdown Regulated the Expression of Melanin-Related Genes

To check whether GNAI2 has an important effect on the melanogenesis pathway, the expression of melanin-related key genes was measured after GNAI2 overexpression and knockdown in melanocytes. The results showed that the mRNA levels of the related genes TYR, DCT, GPNMB, and PMEL were significantly upregulated following GNAI2 overexpression (p < 0.01, Figure 5A). Furthermore, the knockdown of GNAI2 using siRNA-634, which showed the highest effect, significantly decreased the mRNA levels of the melanin-related genes (p < 0.01, Figure 5B). The results indicated that GNAI2 promoted the expression of melanin-related genes.

It was demonstrated that the differential expression of GNAI2 was involved in the different coat colors of Rex rabbits. The greatest expression of GNAI2 was observed in the black skin, and the least expression was detected in the white skin. In addition, GNAI2 overexpression significantly promoted melanin production. Therefore, the results suggested that GNAI2 plays an important role in the formation of different coat colors in rabbits by regulating melanogenesis. Previous research demonstrated that MITF-M mRNA levels were the lowest when the C57BL/6J black mice overexpressed miR-137, and the overexpression of MITF-M increased the melanin content [22]. Melanin content in the skin of Rex rabbits of different coat colors was distinct, and the highest content was observed in those having black skin and the lowest content in those having white skin [23]. Some studies also found that Slc7a11 mRNA and protein levels were different in the skin of rabbits of different coat colors, and the rabbits that had black skin had significantly higher levels than those that had other coat colors [24]. Similarly, the expression pattern of KIT, a key proto-oncogene, was consistent with the Slc7a11 expression [25], and the difference among coat colors of Liaoning Cashmere goats could be explained by mutations in KIT [26]. These findings may provide reasonable evidence to suggest the importance of different genes in regulating the coat color in mammals.
Cell proliferation and apoptosis are the basic phenomena that help to maintain the number of cells in the body during the development and regeneration of the organism and/or its tissues. Melanocyte proliferation and apoptosis could be regulated by some key genes of the melanogenesis pathway. Previous studies indicated that Wnt5a acted as a negative regulatory gene and inhibited mouse melanocyte proliferation, and, thereby, melanogenesis [27]. Skin melanocyte proliferation was regulated by Sox10 by activating the DNA replication licensing factor MCM5 [28]. MicroRNA-143-5p regulated alpaca melanocyte migration and proliferation and melanogenesis [29]. In addition, Opsin 3 (OPN3), belonging to the G protein-coupled receptor superfamily, played a vital role in cell survival. Upon downregulation, it induced apoptosis of the human epidermal melanocytes through calcium-dependent G protein-coupled signaling and mitochondrial pathways [30]. The results demonstrated that GNAI2 promoted melanocyte proliferation when it was upregulated in melanocytes. Furthermore, apoptosis in the melanocytes increased when GNAI2 was knocked down.
GNAI2 played an important role in melanogenesis. It regulated the expression of melanin-related genes and affected melanin synthesis. TYR and DCT are important regulators of melanogenesis. Our results showed that the expression levels of melanin-related genes TYR, DCT, GPNMB, and PMEL were significantly increased upon GNAI2 overexpression. On the contrary, the expression levels of these genes were downregulated after GNAI2 was knocked down. These results suggested that GNAI2 promoted melanin synthesis by maintaining the expression of melanin-related genes.