Bilberry spruce stands are the most widespread forest type in the European boreal zone. Spruce timber is widely used in paper-making and construction. A major part of spruce stands has been altered by varying-intensity clear-cutting and selection cutting. Clear-cutting is the main method of timber harvesting in the boreal zone of Russia. This method is the most profitable but causes substantial landscape fragmentation (Figure 1b) and reduction of the natural forest area, thereby jeopardizing the inhabitants of old-growth forest communities [1]. The most critical problems of the consequences of clear-cuttings are reducing the biological diversity of the territory and restoring forests. These problems have been widely discussed in scientific literature since the 1980s. There is now an understanding that vulnerable species can be conserved not only through strict protection of natural forests but also by modifying the logging practices. One of the approaches, termed Variable Retention Forestry (VRF), is to retain trees in cut-over sites, to have a larger cut-over area remaining under the edge of the forest influence, etc. [1][2][3][4][5][6]. 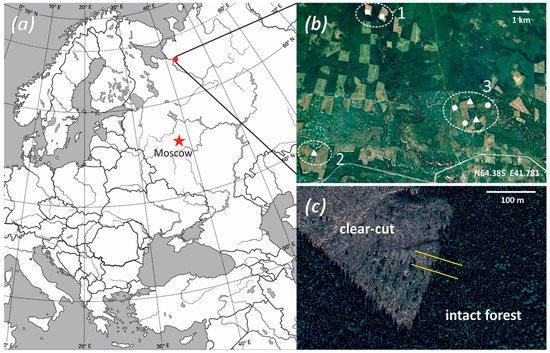 Figure 1. Locations of sampling sites and transect layout. (a)—location of the study area; (b)—locations of clear-cuts (numerals denote sampling site numbers, square marks a 2-year-old clear-cut, triangle—a 5-year-old clear-cut, and circle—a 10-year-old clear-cut, dash line outlines sampling sites; (c)—layout of transects (yellow lines) perpendicular to the forest/clear-cut edge.
Alteration of the tree canopy affects the structure of the understory [7][8][9][10], etc., including the amount and quality of the regeneration. Retention of the regeneration of the main tree species is a way to make VRF more attractive economically, as reforestation costs are reduced [2][3][4][11][12]. The retained forest elements and the forest edge influence the survival and growth of the existing regeneration and promote the emergence of the next (post-logging) generation of coniferous trees by providing them with a competitive advantage. Still, these relationships are complex and dependent on the stand composition and specific ecological conditions [5][13].
Some timber harvesting methods used in Russia meet the principles of VRF [14][15] Such are, first of all, the various selection cutting systems, which both conserve the biodiversity and promote natural regeneration of the tree stand. Improved conditions for spruce growth in shelterwood systems have been highlighted by J. Souček [16], F.N. Druzhinin [17], N.N. Terinov [18], and others. A common practice in clear-cutting in Russia is to leave solo trees or 0.2–0.4 ha forest patches in the cut-over site. Originally, this was done to retain seed sources in the clear-cut, but later on, they were also found to contribute to the conservation of rare species and the forest environment that promotes reforestation [14][19]. A common perception is that the impact of a tree or forest edge extends to a distance equal to the tree height [20][21]. The clear-cutting area within the forest impact zone is determined accordingly, and matching regulations and techniques are suggested [5][21]. Forest impact creates a milder microclimate [22][23][24][25], and the ground cover is affected less severely than in the unsheltered clear-cut [26][27][28]. In forestry practice in the taiga zone of Russia, it is accepted that the impact zone of the forest edge is 2/3 of the height of the tree [29]. Our studies of post-logging changes in the microclimate and ground cover structure showed the tree stand impact zone to be approximately half the stand height [30][31].

The CE zone at the north-facing forest edge contained a reliably greater amount of birch and spruce regeneration than in all other variants (Figure 2). Understory species (rowan and prickly rose) respond to the forest edge aspect differently, and they were significantly more abundant at the west-facing forest edge.

Figure 2. Amount of woody regeneration and understory in the clear-cut adjoining the forest edge in different cardinal directions:

western. Letters indicate differences between means (based on the analysis of variance).

3. Mosses as Indicators for Moisture and Trophic Conditions

Sphagnum species tend to occupy microdepressions and other stagnant sites. It is likely that soil moisture, of which Sphagnum mosses are an indicator, was the determinant for the distribution of woody seedlings and then the regeneration. Regenerating birch was found to be significantly more abundant in Sphagnum-dominated and Sphagnum-subdominated sites in the clear-cut and in Sphagnum-dominated sites under the forest canopy (Figure 3).

Figure 3. The amount of woody regeneration in the forest and the clear-cut depending on the share of Sphagnum mosses in the percentage cover:

absent. Letters indicate differences between the means for the forest and the clear-cut (based on the analysis of variance).
The effect of Sphagnum spp. presence and abundance on the distribution of spruce regeneration were much lower. Regenerating spruce was reliably more abundant only in Sphagnum-dominated sites.
Similar to Sphagnum spp., Polytrichum commune indicates high soil moisture in the subplot. In contrast to Sphagnum, Polytrichum commune tolerates tree stand removal and increased insolation quite well, so its percentage cover does not decrease in clear-cuts compared to the original forest community. Clear-cut subplots lacking Polytrichum commune had significantly fewer regenerating birch trees than the subplots with a relatively high abundance of the moss. Spruce regeneration in the clear-cut was also significantly more abundant in sites containing this moss species.
True mosses (Pleurozium schreberi and Hylocomium splendens) are typical boreal species forming a moss cover under a forest canopy. They respond negatively to stand removal, and their high abundance in the clear-cut suggests that the moisture conditions have remained similar to what used to be under the cut-over forest canopy. Subplots lacking true mosses had a significantly higher amount of spruce regeneration under the forest canopy, and their C zone also contained more regeneration of birch.

4. Competition between Spruce and Birch Regeneration

Comparison of the combined amounts of birch and spruce regeneration across EC zones shows the effect of the forest on the clear-cut extends to a distance of up to 8 m. This is the distance (in the CE zone) at which the amount of regenerating birch is transitional from low values in the adjacent forest to high values in the clear-cut. The total amount of spruce in this zone is significantly higher than in the forest and the clear-cut (Figure 4). Thus, CE width for regeneration is 8 m. Although there was no significant difference between the F and FE zones in the amount of regeneration (Figure 4), we assume, proceeding from our previous studies [30], that FE width is also equal to CE width—8 m.

Figure 4. Average amounts of regeneration and understory in all the surveyed transects, plants/ha: birch, spruce, rowan, and prickly rose in the bilberry spruce forest—clear-cut EC (mean and standard error) for transitional zone width of 8 m in each direction from the forest edge. Legend as in Figure 1. Letters indicate differences between means (based on ANOVA results).
Regeneration of birch in the forest was represented by solo plants in some sampling subplots (density varying from 200 to 1800 plants/ha, i.e., not more than 1 plant per 3 subplots). Its density in the FE zone increased in some transects to 3000 plant/ha, but the difference with subplots in the F zone was generally insignificant. Starting from the forest edge towards the clear-cut, the amount of birch regeneration multiplied: to 5000–8000 plants/ha in the CE zone, and to 8000–10,000 plants/ha in the C zone (Figure 4).
Spruce regeneration density grew from inside the forest (4100 plants/ha on average) towards its edge, reaching a maximum in the CE zone (5400 plants/ha). Regenerating spruce density was the lowest in the C zone—1800–2500 plants/ha, twice lower than in the F zone (Figure 4).
The density of rowan regeneration in open spaces (in C and CE zones) was about 1.5 times higher than under the forest canopy (F and FE zones) (Figure 4).
The amount of prickly rose regeneration was significantly higher in the clear-cut (C zone) than in other EC zones (Figure 4).
Aspen regeneration in most transects occurred as solo plants, and only one subplot contained the species in an amount sufficient for the analysis of spatial distribution. The density of aspen regeneration under the forest canopy (F and FE zones) was an order of magnitude lower than in the clear-cut (C zone) (100, 200, and 2000 plants/ha, respectively).