The carbazole is an electron-rich heterocyclic compound, whose structure can be easily modified by rather simple reactions in order to obtain 2,7(3,6)-diaryl(arylamino)-substituted carbazoles. The substituted derivatives are widely used for the formation of Organic light emitting diode (OLED) due to their good charge carrier injection and transfer characteristics, electroluminescence, thermally activated delayed fluorescence, improved thermal and morphological stability as well as their thin film forming characteristics. 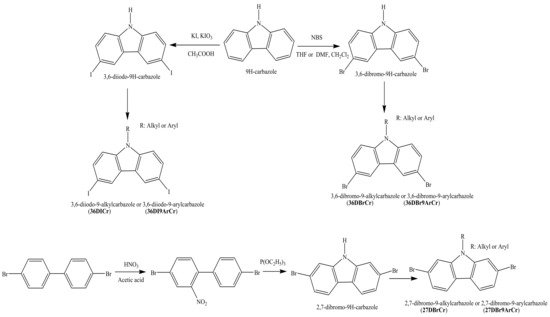 Scheme 2. Synthetic pathway of the 2,7(3,6)-diaryl(arylamino)-substituted objective 9-alkyl(aryl)carbazoles.
The Ullmann reaction is a coupling reaction between aryl halides and aromatic amines or aromatic heterocyclic compounds in the presence of copper-based catalysts. The mechanism of the Ullmann reaction was extensively studied for many years. Complications arise because the reactions are often heterogeneous, especially those catalyzed with metallic copper. [10][11]. Suzuki cross-coupling procedures, developed by Nobel laureate Akira Suzuki, are among the most widely investigated reactions in the formation of carbon–carbon bonds in aromatic compounds. These reactions were generally catalyzed by inorganic catalysts, such as soluble palladium (Pd) complexes having various ligands, and more recently, also in aqueous media [12][13]. The Buchwald–Hartwig amination procedure is a chemical reaction used in organic chemistry for the formation of carbon–nitrogen bonds via palladium-catalyzed coupling reactions of aromatic amines with aryl halides [14]. Other reactions as the Stille coupling [15][16], Diels Alder [17][18][19], and Friedel–Craft [20] have also been used to obtain the target carbazole compounds, but in rarer cases. In the general case, diarylamino carbazoles (27DNCr, 27DNArCr, 36DNCr, and 36DNArCr) are usually obtained by Ullmann or Buchwald–Hartwig reactions. On the other hand, diaryl carbazoles (27DCr, 27DArCr, 36DCr, and 36DArCr) are usually prepared by Suzuki or Stille reactions, as presented in Scheme 2.

Structures of the diaryl-substituted compounds (Cx), which were used to form the hole-transporting layers (HTLs) in OLED devices, are shown in Scheme 3. The target compounds C1–C14 [21][22][23][24][25] and C17–C26 [26][27][28][29][30][31] were obtained under the conditions of the Suzuki reaction. Compounds C15–C16 were generated by the Diels–Alder reaction between conjugated diene and substituted alkene, forming the substituted cyclohexene fragments [32]. Authors of the research studied properties of the derivatives and used these materials for the formation of HTLs in OLED devices. Thermal properties were examined for compounds C1–C13, C17–C19, C21–C22, and C24–C26. The reported material C22 demonstrated the highest thermal stability in this group, with a very high thermal decomposition temperature (Td) of 575 °C, as well as the highest glass transition temperature (Tg) of 260 °C. The values of ionization potentials (Ip) for compounds C9–C11, C17–C20, and C23 were 5.65 eV, 5.55 eV, 5.8 eV, 5.38 eV, 5.42 eV, 5.19 eV, and 5.50 eV, respectively, and confirmed suitable hole-injecting properties for thin layers of many of the materials. HOMO and LUMO levels of the materials C1–C8, C13–C17, C19–C22, and C24–C26 are different and depend on the nature of the substituents. The HOMO level of the diarylcarbazoles varied between −4.93 and −6.02 eV, and the LUMO level was in a broad range between −0.87 and −2.93 eV due to different electron-withdrawing or donating substituents at the carbazole core. 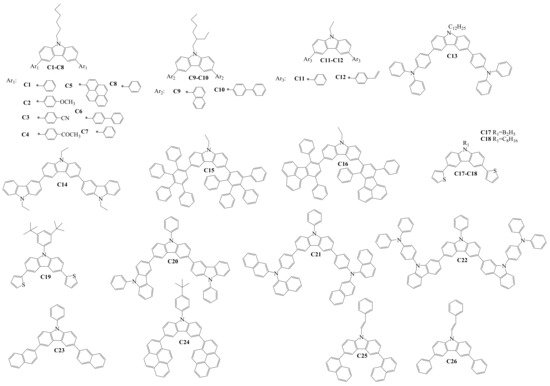 Scheme 3. Structures of 3,6-diarylcarbazoles used for hole-transporting films in OLEDs.
Positive charge drift mobility (µh) in the thin layers of the derivatives C12, C17–C19, C21–C22, and C25–C26 were reported. The compounds demonstrated rather high hole-drift mobility in their amorphous films ranging from 5 × 10−5 cm2·V−1·s−1 to 1.5 × 10−4 cm2·V−1·s−1 at high electrical fields. The charge-injecting/transporting properties of these materials confirmed that they are suitable hole-transporting layer materials in OLEDs.
Agarwal fabricated the single-layer spin-coated OLEDs, in which the derivatives C1-C8 were sandwiched between indium tin oxide (ITO) or ITO/PEDOT:PSS {poly(3,4-ethylene-dioxythiophene): poly(styrenesulfonate)} as the anode and a calcium (Ca) cathode, which was protected by a thick layer of Al. Multilayer OLEDs with the materials C1–C8 were also fabricated. The structure of the devices was ITO/F4TCNQ (2,3,5,6-tetrafluoro-7,7′,8,8′-tetracyano-p-quinodimethane)/TPD (N,N′-(bis(3-methylphenyl)-1,1′-biphenyl-4,4’-diamine))/CBP (N,N′-dicarbazolyl-4,4′-biphenyl)/C3 or C4/BCP (4,7-diphenyl-1,10-phenanthroline)/LiF/Al. Brightness as high as 900–1000 cd/m2 was achieved in the multilayer OLED devices using the HTLs of C3 or C4. Green electro-phosphorescent devices ITO/PEDOT:PSS/C9 or C11/CBP/Ir(ppy)3 (tris(2-phenylpyrydine(iridium(III))/TPBi (2,2′,2″-(1,3,5-benzinetriyl)-tris(1-phenyl-1-H-benzimidazole))/LiF/Al were also presented. The device with C11 demonstrated the best results, with a turn-on voltage of 5 V, a maximum brightness of 9800 cd/m2, and a maximum current efficiency of 22.5 cd/A. C12 was tested as an electron-confining HTL for phosphorescent OLEDs with a red, green, or blue emitting layer. The power efficiency of the studied red device was increased from 8.5 to 13.5 lm/W, an increment of 59%, and the maximum luminance was enhanced from 13,000 to 19,000 cd/m2, an increment of 46%, as compared with an analogous device using commercial HTL material. For the blue device using C12, the power efficiency was increased from 6.9 to 8.9 lm/W, an increment of 29%, and the maximum brightness was enhanced from 9000 to 11,000 cd m−2, an increment of 22%. C13 as an HTL was investigated by Kochapradist et al. Tris(8-hydroxyquinolinato)aluminum (Alq3) emitter-based green OLEDs, with the structure of ITO/PEDOT:PSS/C13/Alq3/LiF:Al, were fabricated. The material C13 showed excellent hole-transporting properties for the green device—a luminance (current) efficiency exceeding 5 cd/A was achieved. Lee and co-workers studied the hole-transporting properties of C14 and formed the device with ITO /CuPc (copper(II)phthalocyanine)/C14/Alq3/LiF/Al. For an objective comparison of electroluminescent properties, a reference device was fabricated and NPB was used as the HTL material. The device with the compound C14 showed a high power efficiency of 1.67 lm/W and a current efficiency of 6.12 cd/A, which were higher as compared with the NPB-based device. OLEDs with the structures ITO/2-TNATA (4,4′,4′′-tris{N-(2-naphthyl)-N-phenylamino}-triphenylamine)/C15 or C16/Alq3/LiF/Al were fabricated by Park and co-workers. The devices showed pure performance, with their luminescence efficiency exceeding only 3 cd/A and a power efficiency exceeding 1 lm/W.
In order to identify the charge-transporting properties of C17, multilayer OLED devices were fabricated by Kim et al. The green device ITO/CuPc/C17/Alq3/LiF /Al showed a current efficiency of 5.16 cd/A and a power efficiency of 2.35 lm/W. Braveenth and co-authors studied the properties of the compounds C18–C19 as hole-transporting materials. Device configuration was ITO/DNTPD (4,4′-bis[N-[4-{N,N-bis(3-meth ]-N-phenylamino]biphenyl)/C18 or C19 /Bebq2 (bis(10-hydroxybenzo[h]quinolinato)beryllium): Ir(mphmq)2(tmd) (bis[2,4-dimethyl-6-(4-methyl-2-quinolinyl)phenyl](2,2,6,6-tetramethyl-3,5-heptanedionate)/Bebq2/LiF/Al. A C18-based phosphorescent device exhibited higher maximum current efficiency (24.6 cd/A) and higher maximum external quantum efficiency (23.2%) as compared with a C18-based OLED. In the double-layer device, ITO/C20/Alq3/LiF/Al, in which C20 was used as the hole-transporting material, a yellowish-green color arising from the Alq3 was observed. It was only reported that the luminance at the applied voltage of 10 V was about 9600 cd/m2. Devices with the structures of ITO/C21/TPBi/LiF/Al and ITO/NPB/C21/TPBi /LiF/Al were fabricated to evaluate the properties of C21 as a hole-transporting light-emitting layer. A quantum efficiency of 2.21% was obtained for the C21-based device having an additional NPB layer.
Kumar and co-workers investigated the hole-transporting properties of C25 and C26 for fluorescent OLEDs ITO/PEDOT:PSS/NPB/C25 or C26/Alq3/LiF/Al, as well as for phosphorescent devices ITO/PEDOT:PSS/NPB/C25 or C26 /Ir(ppy)3/CBP/TPBi/LiF/Al. At 1000 cd/m2, the fluorescent green device with C26 showed a current efficiency of 4.0 cd/A, which was about 135% higher than that of the typical HTM NPB-based device. Green phosphorescent devices with C25 showed a high current efficiency of 58.4 cd/A (power efficiency 54.8 lm/W and EQE 16.1%), while 45.1 cd/A (power efficiency 40.8 lm/W and EQE 12.5%) was measured in the C26-containing device.
Diarylamino-substituted carbazoles, which were used as HTLs in OLEDs, are shown in Scheme 4. The target compounds C27–C42 were all obtained by Ullmann amination reactions [33][34][35][36][37][38][39]. C30–C42 demonstrated sufficient and high thermal stability, with the thermal degradation temperatures (Td) ranging from 263 °C to 490 °C. The derivatives C30–C42 are also suitable for glass formation, having a Tg in the range of 42–217 °C. The Ip of the compounds C30–C31 and C37–C42 were reported and demonstrated the values of 5.80 eV, 5.81 eV, 5.50 eV, 5.24 eV, 5.43 eV, 5.67 eV, 5.28 eV, and 5.34 eV, respectively. HOMO and LUMO energy levels were reported for the materials C27–C30. The values of HOMO/LUMO for the derivatives C27–C30 were −4.92/−1.91 eV, −4.92/−2.24 eV, −4.92/−2.33 eV, and −4.83/−1.87 eV, respectively.

Scheme 4. Structures of diarylamino-substituted carbazoles used for HTL formation.
The charge-transporting properties of the derivatives C27–C28 and C31–C42 were studied with the time-of-flight technique. The µh values ranged from 1.2 × 10−8 to 2 × 10−3 cm2·V−1·s−1 at high electric fields. The µh in the films of C32 and C40 dispersed in bisphenol Z polycarbonate (PC-Z) reached 10−3 cm2·V−1·s−1 at high electrical fields. The charge injection/transport characteristics of some from the derivatives C27–C28 and C31–C42 showed that they are suitable as hole-transporting layers for OLED devices.
Shen and co-authors investigated two types of devices. The structure of device I was ITO/C27–C30/TPBi/Mg:Ag, and that of device II was ITO/C27–C30/(Alq3)/Mg:Ag. In type I, the derivatives functioned as both hole-transporting and emitting materials. In the type II devices, light was emitted from either the disubstituted carbazole layers or from Alq3. Device II with C30 reached a maximum external quantum efficiency of 1.3%.