Embedding reinforcing textiles into inorganic matrices is an innovative technique which offers the possibility to manufacture thin, slender, and lightweight but robust structural elements. Textile-reinforced concrete (TRC) is a promising composite material with enormous potential in structural applications because it offers the possibility to construct slender, lightweight, and robust elements.

Embedding reinforcing textiles into inorganic matrices is an innovative technique which offers the possibility to manufacture thin, slender, and lightweight but robust structural elements. This cementitious composite material is known by several names in the literature and in practice. Textile-reinforced concrete (TRC), textile-reinforced mortar (TRM), or fabric-reinforced cementitious matrix (FRCM) are the most common. Since its first applications in the early 2000s, TRC has found its way into practice in a wide range of applications, either as a standalone material or as a component in composite members/structures, as it can exhibit high load-bearing capacity and ductility [1]. Several examples of TRM/TRC applications have been presented in various manuscripts, such as [2]. Some of the most interesting examples are related to the construction of pedestrian bridges, shell structures with various shapes and curvatures, load-bearing and non-bearing wall elements (either single panels or sandwich-type elements), roof elements, pipes, and several sorts of strengthening schemes of existing elements (structural strengthening of concrete columns and beams, load-bearing masonry elements, and infill walls). Hence, its mechanical performance has been widely investigated in the past decades and this research is still ongoing [2].
Despite the years of continuous investigations of the mechanical performance of TRC, there is some difficulty in compiling the obtained knowledge as there is no standard testing method yet [3]. The situation is even worse when it comes to thermal loading of TRC. Apart from variations in the specimen geometry, the clamping method, the loading rate, etc., the performed tests found in the literature also vary in the heating rate, the method and the position of the temperature measurements, and the exposure time. However, most importantly, they vary in the combination of the heating and mechanical loading conditions. The performance of the matrix and the bond may differ dramatically, depending on whether the mechanically loaded specimen is in a hot or a cooled down state. Additionally, the load level at which the heating is applied also affects the specimens’ response severely. The effects of these variations of the testing conditions are shown later on in the Discussion section of this paper. Therefore, the experimentations are categorized into three cases:
The physical response of cement composites during exposure to high temperatures is not expected to differ significantly from the response of the unreinforced matrix. Due to the low fiber volume fraction that is commonly used in TRC, the thermal properties (thermal conductivity, specific heat capacity, etc.) are not strongly influenced by the fibers [4]. Additionally, TRC is characterized by its non-combustibility and no smoke/gas emissions [5]. However, the presence of the fibers (especially when they are polymer coated) might cause a stochastic spalling behavior, i.e., either triggering or preventing spalling [4].
Several studies have been conducted on structural elements with TRC parts. For example, fire tests on sandwich panels with TRC faces have been conducted [6][7][8]. The fire performance of TRC strengthened elements (of concrete or masonry) has been widely tested too [9][10][11][12][13][14][15][16][17][18][19]. However, in all these studies, the performance of the element does not depend solely on the thermal response and the thermomechanical performance of TRC, but also on the substrate and their interaction (i.e., bond strength). The effect of increased temperatures on the bond strength between the substrate (concrete or masonry) and the TRC strengthening layer has been studied by [20][21][22][23][24][25][26][27]. The performance of TRM/TRC systems under elevated temperatures and fire conditions has been discussed in the review study of [28], which emphasized the behavior of strengthening schemes.

2. Performance of the Textile-to-Matrix Bond

The performance of TRC under thermal loads does not only depend on the performance of the constituent materials, that is the reinforcing fibers and the matrix, but also on their interaction, thus, on the matrix-to-fibers bond. Since the coating of the textiles is a common practice for several reasons (improvement of the textile-to-matrix bond, activation of the inner filaments, protection of the reinforcement from chemically aggressive matrices [2]), the bond strength depends on the coating nature. Therefore, the bond strength deterioration due to high temperatures depends a lot on the presence and the thermal behavior of the coatings.
The study of De Andrade Silva et al. [29] investigated the residual bond behavior of coated versus uncoated carbon fiber-reinforced concrete specimens exposed to temperatures up to 600 °C, by double-sided pull-out tests. Liu et al. [30] tested the effect of temperature on epoxy-impregnated, single and double yarn specimens, of glass and basalt fibers, embedded into a cementitious matrix. The exposure temperatures were up to 600 °C and the specimens were tested after cooling down (residual capacity). The effect of temperature on the maximum load recorded at the pull-out tests is shown in Figure 1. 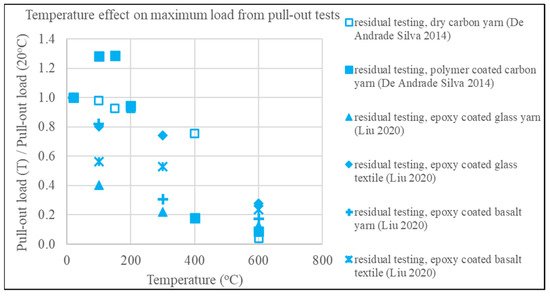 Figure 1. Influence of exposure temperature on the maximum pull-out load on TRC specimens.
The uncoated (dry) textiles were barely affected at temperatures up to 200 °C, regardless of the testing conditions. After exposure to 400 °C, the residual bond properties degraded due to chemical degradation of the matrix, dehydration, and changes in the interphase morphology. Hence, the pull-out load experienced a fast reduction.
Regarding the coated textiles, for temperatures below 200 °C, De Andrade Silva et al. [29] reported improved performance of the polymer-coated textile-reinforced specimens tested after cooling down (due to the melting and re-stiffening of the coating). On the contrary, all cases tested by Liu et al. [30] experienced significant reductions (ranging between 20% and 60%) after exposure to 100 °C. The differences between the results might lie in many parameters, such as the different thermomechanical behavior of each polymer coating, the different testing mechanism and different geometry, the matrix compositions, etc. Hence, the results are not adequate to draw reliable results.
After exposure to 300 °C and 400 °C, the residual bond strength deteriorated severely in all cases, since the polymer coatings were completely decomposed, leading to a loss of bond strength. After exposure to 600 °C, the degradation of the fibers was also severe and the pull-out load was very low, regardless of the surface treatment. In many cases, failure was reported due to fiber rupture and not due to pull-out. However, the results are still limited, and they present large variations; therefore, more research is necessary.
The studies of Rambo et al. [31][32] have also investigated the textile-to-matrix interface, by scanning electron microscopy analysis. However, these studies have focused on the performance of the composite rather than on the bond specifically. The observations generally comply with the results reported by De Andrade Silva et al. [29] and Liu et al. [30], but no pull-out tests have been conducted to compare the results numerically. Therefore, the results of these studies [31][32] are presented in the following paragraphs where the performance of the composite is discussed.