Subjects: Others
View times: 3
Submitted by:

Nanotechnology has become an emerging technology in the medical field and is widely applicable for various clinical applications. The potential use of nanoparticles as antimicrobial agents is greatly explored and taken into consideration as alternative methods to overcome the challenges faced by healthcare workers and patients in preventing infections caused by pathogenic microorganisms.

Nanoparticles (NPs) are ultrafine unit particles with one or more dimensions at the nano-size ranging from 1 to 100 nm [1]. There are several factors that influence the physical stability and interactions of NPs with bioactive compounds in vivo. Examples of these factors are the surface morphology, shape, size, and diameter of the particle. The antimicrobial activity of the nanoparticles corresponds to the high surface-area-to-volume ratio. This is because small particles have the largest surface area which increases the interaction with bacteria and improves their antimicrobial activities [2]. In addition, the large surface area to volume also allows the molecules to bind, fuse and integrate the therapeutic agents to the particles [3]. According to Larner and colleagues (2017), NPs often have unexpected visible properties because they are small enough to confine their electrons and produce quantum effects compared to their bulk materials. Thus, NPs confer special optical effects, increase reactivity, and have good stability, but the theory behind these scientific occurrences are still unclear and require further studies for justification [4]. Nanoparticles exhibit unique features and excellent physicochemical characteristics that make them compatible with different biomedical approaches [1][5] including drug delivery systems, radiotherapy, molecular imaging, and treatments for cancer, neurodegenerative disease, lung disease, acquired immune deficiency syndrome (AIDS), and eye disease [6]. Moreover, other industries also highly exploit the use of NPs such as personal care products, electronics devices, buildings, and building materials [7].
NPs are classified based on their constituents and dimensional structure. The constituent is the chemical composition of the material, while the dimensional structure refers to 0D, 1D, 2D and 3D. For example, 0D NPs are holospheres, nanolenses and core–shell quantum dots. 1D NPs consist of nanowires, nanotubes, nanorods and many more. 2D NPs are more to multilayers, films, or plates, while 3D is the crystal form of NPs. The classifications are equally important for researchers as guidelines for safe handling, while the performance of the NPs are based on applications [8]. There is a diverse range of NPs that are currently being studied, namely, carbon-based NPs (carbon nanotubes, fullerene and graphene) [8], metallic-based NPs (silver, gold, copper, iron, arsenic, zinc, nickel, chromium, molybdenum, tantalum, cobalt and antimony) [9][10][11], natural polymeric NPs (chitosan, hyaluronic acid and albumin), synthetic polymeric nanoparticles (poly(glycolic acid), acrylic acid and poly(lactic acid) and dendrimers) [12], lipid-based NPs (solid lipid nanoparticles, nanostructured lipid carriers, lipid–drug conjugates and nanoemulsions) [13] and nanocomposites (metal matrix nanocomposites, polymer matrix nanocomposites and ceramic matrix nanocomposites) [14]. Figure 1 depicts NPs based on classifications and properties. Bottom-up and top-down are the two main techniques applied in the synthesis of NPs, whereby these techniques can be biological, physical, and chemical. The biological techniques use microorganisms such as B. subtilis, sulphate-reducing bacteria S. marcescens, E. coli and B. licheniformis. Both physical and chemical techniques use different substances, such as ammonia, citrate and sodium borohydride, to synthesise NPs [15]. The bottom-up techniques mainly involve a reduction in chemicals, metal vaporisation, electrodes in a chemical solution, light source, high temperature, precipitation, emulsion, sol-gel and many more. The top-down techniques are based on processing a higher scale of nanoparticles to the simplest forms by using a size reduction technique (ball milling), fraction of the metallic atoms on the surface (metal dispersion techniques), and rapid combustion by electrical coil [16]. 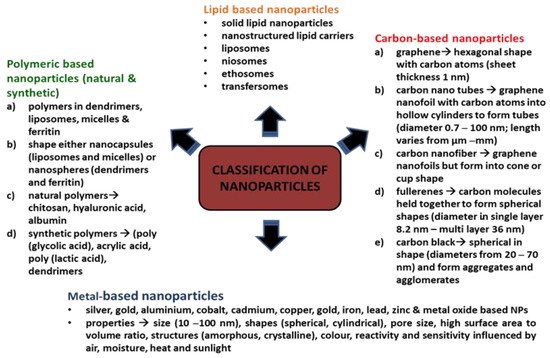 Figure 1. Classifications of nanoparticles.
NPs have gained attention, particularly in antibiotic therapy, as additional substitutes to treat infections caused by various kinds of microorganisms. NPs have emerged as a new promising treatment to combat bacteria or other microorganisms that have developed resistance to antimicrobial drugs, as NPs have excellent bactericidal or microbicidal effects against microbes, such as bacteria, by associating directly with the bacterial cell wall without perforating the cell [17]. In addition, elevated levels of antimicrobial drugs can be initiated and infused at the infected area through NPs as drug delivery vehicles. These NPs have more absorption capacity (i.e., high bioavailability) with longer half-lives and are less likely to cause cell toxicity [11]. Therefore, incorporating NPs with antimicrobial agents or any active moiety of choice can resolve the microbes’ tolerance to drug treatments, maintain optimal antimicrobial concentration, minimise cytotoxicity effects and act as a novel strategy to eradicate microorganisms that cause diseases [11][17].

It has become a significant challenge for health professionals to treat patients infected by bacteria. This is because prolonged antibiotic or antimicrobial therapies cause bacterial species to become resistant to these treatments since bacteria multiply at a fast rate. The inefficacy of the host immune defence allows for the entry of microbes to colonise and grow [18]. According to Cepas and co-workers (2019), microbes containing adaptable strains or dormant strains, known as “persistent strains”, exhibit antibiotic tolerance and become active once the therapy is withdrawn. These include viruses, bacteria, fungi and parasites. They also added that most of these high-resistance microbe species originated from hospital sites and led to high mortality and morbidity due to the inability of the antibiotic treatments to eliminate these microbes from the infected area. Infections caused by S. aureus have affected people in the US at a cost of 4 billion annually for treatment and management [19]. Emerging infectious diseases (EIDs) are a significant burden on global economics and public health. The incidence of EID events is mostly caused by bacterial species encompassing a large number of drug-resistant microbes [20]. Based on the National Institute of Health, the main causative factor that contributes to pathogenic infections in humans is the formation of biofilm, which is accountable for more than 80% of infections [21]. Commonly, biofilms can be found in chronic wounds, renal infections, cystic fibrosis, severe gum infections, inflammation in the endocardium, inflammation of the meninges, medical-device-associated infections, etc. [21][22].
Other than hospital sites, bacterial biofilm is also present on surfaces in nature, pipeline networks and industrial workplaces in which these biofilms play a dual role, either beneficial or detrimental depending on the conditions of the hosts [23][24]. Biofilms are beneficial as biofertilizers to supply nutrients to crop plants, microbial fuel cells to generate electricity, and to clean up contaminated soil and underground water (bioremediation). Therefore, controlling the formation of biofilms is vital to maintaining biofilms for biotechnological processes and to destroying biofilms for preventing microbes from causing diseases and contaminations [25]. Conventionally, there will be more than one type of microbial species embedded within a biofilm such as in the mouth with 500 different bacterial species in a biofilm [24]. Pathogens, particularly bacteria, form biofilms that function as a barrier to growth, multiply, protect against the host immunity system, resist changes in pH and osmotic concentration or resist drug treatments such as multidrug resistance [26][27]. Biofilm is a clump containing a fraction of bacteria encapsulated with an extracellular polymeric matrix or extracellular polymeric substances (EPS) that attach to the surface area [28]. The EPS is in an aqueous environment containing protein substances and plays a role in maintaining the structural integrity of the biofilm, supplying nutrients, supporting adhesion to surfaces and assisting the intercellular signalling molecules, such as cyclic dimeric guanosine monophosphate (c-di-GMP), that are found in bacterial species within the biofilm. In brief, EPS supports colonisation or re-colonisation of bacteria by adhering to surfaces [29].
Theoretically, there are five stages involved in the formation of a bacterial biofilm [30]. In the first stage, the planktonic bacteria reversibly attach to a suitable surface. In the second stage, the cells begin to connect irreversibly through appendages such as fimbriae, pili, flagella, and lipopolysaccharide (LPS). The third stage involves the cells growing and synthesising EPS containing protein matrix. In the fourth stage, the bacterial cells proliferate and mature to form microcolonies and biofilms. At the final stage, some cells detach or are freed from the biofilm and disperse the contents as planktonic cells to form new biofilms in different locations [30][31]. Figure 2 shows the formation of bacterial biofilms. During biofilm maturation, bacterial cells communicate to other cells within the biofilm or with other microbes through a process known as quorum sensing (QS). This helps the bacteria to keep track of their cell numbers and regulate the expression of quorum-specific genes that facilitate bacterial activity including biofilm formation, virulence, cell mobility, extracting nutrients from other cells and deactivation of the immune system [32]. Ideally, Staphylococcus species is a group of Gram-positive bacteria with a firm biofilm that causes prolonged infections leading to non-wound healing in chronic wounds [33]. S. aureus has the highest resistance followed by S. epidermidis towards antibiotics which are primarily used to prevent hospital-acquired infections caused by these species, specifically with implanted devices. Both species form well-established biofilms, causing more infections compared to other Gram-positive or Gram-negative bacteria. In addition to these bacteria, a few examples of bacterial species that can be found in hospital settings are P. acnes, E. faecalis, S. viridans, E. coli, K. pneumoniae, P. mirabilis and P. aeruginosa [21][34]. In current practice, patients are given more than one type of antibiotic to reduce infections and resolve problems related to drug resistance. The potency of the drugs depends on the patients’ health conditions and requires clinical examinations, antimicrobial sensitivity pattern and aetiological agents to determine the strain causing the infections [20][35]. 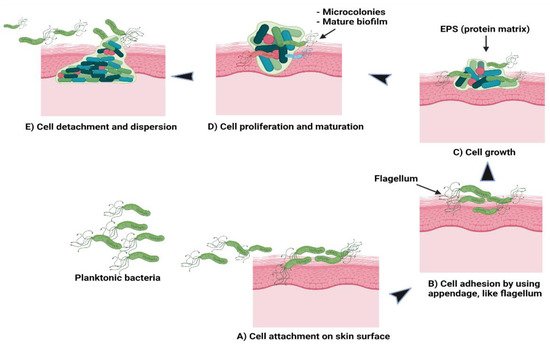 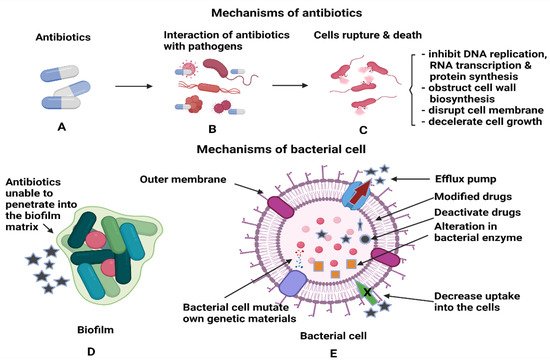