Alveologenesis is the final stage of lung maturation, when an alveolar region is divided into smaller units called alveoli via the process known as secondary septation. Each of the formed septa serves as a new gas exchange surface, and all together, they dramatically increase the respiratory surface area. Alveologenesis is divided into 2 phases: classical and continued. During the classical alveologenesis, the secondary septa are formed and the number of alveoli increases. During the continued alveologenesis, the maturation and thinning of the septa occur and the size of alveoli increases. The disruption of alveologenesis leads to the simplification of the alveoli, as seen in preterm infants diagnosed with bronchopulmonary dysplasia (BPD), a widespread pulmonary disease that is often connected with lifelong respiratory failure.

The postnatal development of alveoli is the most important and less investigated phase of lung development. The pathology of alveolar formation is often detected during the occurrence of pulmonary diseases in adults and children. However, the mechanisms of alveologenesis remain mostly understudied.
Alveologenesis is the final stage of lung maturation, when an alveolar region is divided into smaller units called alveoli via the process known as secondary septation. Each of the formed septa serves as a new gas exchange surface, and all together, they dramatically increase the respiratory surface area. The disruption of alveologenesis leads to the simplification of the alveoli, as seen in preterm infants diagnosed with bronchopulmonary dysplasia (BPD), a widespread pulmonary disease that is often connected with lifelong respiratory failure. There are approaches that can be used to study lung development, including alveologenesis. Among them is the cultivation of cells and lung slices in vitro. Pieretti et al. showed that P4 lungs inflated with agarose and grown for four days, embedded in a collagen matrix, appear to septate similarly to lungs that grow in vivo [1]. Live images of alveologenesis in precision-cut lung slices can reveal dynamic cell behavior [2]. Lung organoids and lung-on-a-chip techniques can also serve as models for the investigation of lung development, functions, and respiratory diseases [3][4]. Much information about signaling pathways has been obtained using mouse models with cell-specific gene ablations, some of which will be described here. In vivo models of alveoli regeneration such as lung regeneration after an injury caused by exposure to smoke or chemicals or the realveolarization after partial pneumonectomy (PNX) also play an important role in understanding pulmonary alveologenesis. The development of alveoli is regulated by a complex network of signaling pathways, which involve different pulmonary cell types. Lung mesenchyme cells, such as alveolar myofibroblasts [5], and also endothelial cells [6] are considered to be drivers of alveolar development. Epithelial–mesenchymal interactions are known to regulate lung morphogenesis, while the mesenchyme possesses induction activity [7][8] and consists of multiple cell subpopulations, which differ in spatial arrangement and functions. Among them are airway and vascular smooth muscle cells; pericytes; interstitial myo-, matrix-, and lipofibroblats; the recently revealed myofibrogenic progenitor cells, which preferentially generate abnormal myofibroblasts after injury; alveolar niche cells necessary for the maintenance of epithelial proliferation and differentiation [9]; and mesenchymal stem cells, the rare and poorly described population of progenitors with proliferative potential that are activated after injury and are able to differentiate in several mesenchymal cell types. Identifying origin distinctions of fibroblast-like cells is a very difficult task. The activation of ligands and receptors of the main pathways used for clone tracing in the mesenchyme strongly depends on context. Despite the availability of single-cell RNA sequencing (scRNAseq) data allowing for the identification of the profile of mesenchymal lung cell subpopulations, isolating these cells by their characteristic markers remains difficult, given that their functionality and heterogeneity changes during development. One single signaling pathway can be activated in multiple fibroblast subpopulations. Cells repeatedly activate the same signaling pathways during lung development and regeneration after injury; however, at the same time, they can function as rather distinct clones. Thus, the moment of activation of the lineage marker (signaling pathway molecules) plays an important role in progenitor identification and the determination of its lineage trajectory [10]. Cell subpopulations are rather thought to be transient states, common for this or that subtype of interstitial fibroblasts than definite cell types. In adults, pulmonary diseases such as chronic obstructive pulmonary disease (COPD) and lung fibrosis are connected with the impairment of alveolar regeneration. Despite the apparent variety of studies and literature on lung development, specifically postnatal development, and the use of modern techniques such as scRNAseq, the data on alveologenesis are rather scattered and do not provide a holistic idea of the complex of cellular, mechanical, and molecular interactions that ensure the formation and regeneration of alveoli.

The formation of the alveoli (alveologenesis) is the final stage of lung development and is subdivided into two phases (Figure 1). The first phase begins on the 3rd–4th day of postnatal development (P3–P4), and is characterized by the formation of the secondary septa, which represent the invaginations of the saccular walls rich in ECM and separate and expand the alveolar surface area [53]. Around P3, as the breathing mode is established, a subpopulation of the secondary crest myofibroblasts (SCMFs, also known as alveolar myofibroblasts) with increased traction force appears in the lung mesenchyme [5]. SCMFs participate in secondary septa formation and actively accept different signals from AT1 cells. Contractile activity of myofibroblasts is supposed to physically form alveoli [54]. SCMF precursors are the subpopulation of platelet-derived growth factor receptor α (PDGFRα) positive cells that later in embryonic development become α-smooth muscle actin (αSMA) positive and are found on the tips of the alveolar septa in close proximity to deposits of elastin (Figure 2A). 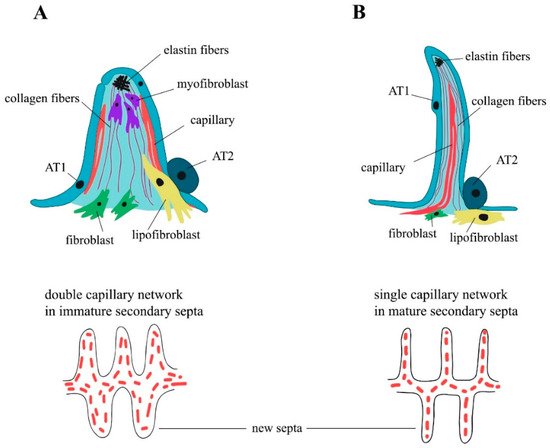 Figure 2. Alveolar secondary septa. Classical alveologenesis. Immature, thick secondary septa. Double capillary network (A). Continued alveologenesis. Mature, thin secondary septa. Single capillary network (B). Redrawn from [52][55].
PDGF-A and its sole receptor PDGFRα constitute an axis of cross-communication between pulmonary endodermal and mesodermal cells [25]. Endodermal cells express the ligand [25], and PDGFRα is ubiquitously expressed throughout the lung mesoderm [56][57]. Earlier, PDGF-A signaling over PDGFRα was shown to be necessary for lung growth and alveoli formation, but not for branching morphogenesis [58]. According to a widespread model of septa formation, PDGF-A secreted by the epithelium is extruded into the lumen of alveoli by the exerting force of myofibroblasts and developing capillary. Then, the septa are thinned through the processes of apoptosis and capillary maturation [59][60]. Impaired Notch signaling in mice, especially Notch2, results in the abnormal enlargement of the alveoli. During neonatal life, Notch2 is activated in AT2 cells to induce PDGF-A expression, triggering the paracrine activation of PDGFRα signaling in the SCMF precursors required for alveologenesis [61]. The first phase of alveologenesis, from around P5 to P14, when SCMFs are present, is called classical alveologenesis (Figure 2A). During the second phase of alveologenesis (continued alveologenesis), from around P14 to P36, formed immature septa start thinning, the double capillary septal network is modified to a single one, thus forming mature, thin septa in an adult lung (Figure 2B) [60]. After the active phase of alveologenesis is completed, more than 20% of interstitial fibroblasts are subjected to apoptosis, a process that is crucial for the normal development of the lung [62][63]. Nevertheless, taking into account the cell heterogeneity of the mesenchymal compartment, the question of which subpopulation of fibroblasts is eliminated thus becomes controversial [62][63][64]. There is an opinion that the thinning of the alveolar walls during the second phase of alveologenesis is caused by the depletion of lung myofibroblasts after around P15 through apoptosis and phagocytosis [65]. The flow cytometry evaluation of lipid-filled interstitial fibroblasts stained with a lipophilic marker showed that this exact subpopulation is eliminated via apoptosis after alveolarization [66]. Results of several studies have suggested the temporal expression of αSMA by some subpopulations of alveolar mesenchymal cells that play the role of SCMFs and are not eliminated afterwards [67][68]. Multiple data have demonstrated that myofibroblasts are crucial for secondary septa formation, but the mechanisms of αSMA+ SCMFs depletion after the first phase, and the question of which cells and mechanisms participate in the second phase of alveologenesis after the elimination of αSMA+ SCMFs by P15, are the subject of future investigations.
Alveolar density reaches its peak on P39 and stays unchanged after 9 months. The generation of alveoli is fast between P5 and P14, but slows down afterwards [69]. As mentioned before, immature secondary septa have a double capillary network and are quite ineffective in the required gas exchange (Figure 2A). During the maturation of the blood microvessels, the septa start thinning and two capillary layers merge and thus form a more effective single capillary network (Figure 2B) (for the review, see [52]). The single capillary network exchanges oxygen and carbon dioxide with two adjacent alveoli, which adds to the efficacy of the gas exchange. On P4–P21, new secondary septa are formed from immature secondary septa emerging at first from the walls of saccules, and further in development from the walls of immature secondary septa with the double capillary network. On days P14–P36, new septa are lifted off mature septa containing single capillary networks (Figure 2). At the same time, the local duplication of the capillary network due to angiogenesis is found at the base of the newly formed septa in the second phase of alveologenesis. The alveolarization and maturation of microvessels are the processes that run in parallel [70]. Lung development continues into young adulthood: for mice, data are known up to P39 [69], for rats, up to P60 [71]. Alveoli are, in fact, able to form at any time and anywhere inside the lung parenchyma [52]. Thus, in the alveolar septum, the air–blood barrier has thick parts that contain the nuclei of AT1 cells and fibroblasts and the fiber network of ECM, which provides the regenerative capacity and mechanical stability of the septum; it also has thin parts where the alveolar epithelium and the capillary endothelium share one common basal lamina that minimize the thickness of the diffusion barrier. In the human lung, about half of the entire air–blood barrier is thin [72][73].