For decades, lung cancer has represented the deadliest type of malignancy within oncological diseases. The clinical outcomes of its treatment are hampered by the development of drug resistance, which can be based on pharmacodynamic and pharmacokinetic principles [1]. ATP-binding cassette (ABC) drug efflux transporters together with cytochrome P450 (CYP) biotransformation enzymes play crucial pharmacokinetic roles through orchestrating absorption, distribution and elimination of numerous drugs. Due to this feature, some members of these superfamilies provoke clinically relevant drug interactions (DIs) [2][3]. At the same time, ABCB1, ABCG2, ABCC1 and CYP3A4 were recognized as important pharmacokinetic mechanisms of oncological multidrug resistance (MDR). These proteins are overexpressed in several tumor types, where they decrease the efficacy of anticancer drugs by efflux or metabolism, respectively [4][5].
Tepotinib (trade name Tepmetko) is a novel c-MET tyrosine kinase inhibitor that was recently approved in Japan for the treatment of patients with advanced non-small cell lung cancer (NSCLC) harboring a MET exon 14 skipping mutation [6]. In February 2021, US Food and Drug Administration (FDA) approved the drug for the treatment of adult patients with metastatic NSCLC [7].

In accumulation studies, tepotinib potently inhibited the ABCB1 transporter yielding low micromolar IC50s for both model substrates (Figure 1A). ABCG2 was also significantly inhibited at the majority of concentration points, although with lower potency (Figure 1B). Finally, a negligible extent of interaction was observed for the ABCC1 transporter (Figure 1C). The experimental results were confirmed by molecular modeling. In the case of ABCB1, tepotinib showed the highest affinity for the M- and H-sites (Figure 1A bottom left). Furthermore, the docking suggested tepotinib interactions with residues involved in the binding of ATP (Figure 1A bottom right). However, only crystal structure may prove the affinity of tepotinib for nucleotide binding domains, because an unfavorable interaction with Lys-1076 has been predicted. For ABCG2, our results show that tepotinib may stabilize the inward-facing conformation of this transporter and prevent binding of ATP (Figure 1B bottom). 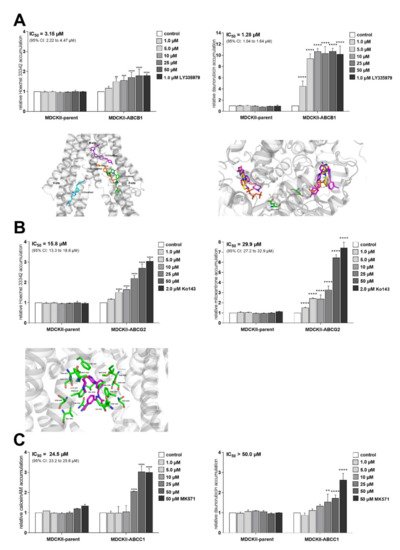 In the follow-up studies, we evaluated MDR-reversal properties of tepotinib in in vitro cellular models with ABCB1 or ABCG2 overexpression. Tepotinib concentrations (5 or 10 µM for ABCB1 or ABCG2, respectively), which were negligibly cytotoxic in model cell lines and showed significant transporter inhibition, were tested in drug combinations.
Tepotinib significantly sensitized transporter-overexpressing MDCKII, A431 and HL60 cells to daunorubicin and mitoxantrone, while no such effects were observed in respective parent cell lines. Combination index analysis showed a substantial difference between combination outcomes; synergism and antagonistic/additive effects were predominantly recorded in transporter-expressing and parental cell lines, respectively (Figure 2). These data clearly confirm that tepotinib-mediated inhibition of ABCB1 and ABCG2 plays an essential role in MDR reversal effect. In addition, results of caspases’ activities assessments demonstrated that efficient activation of apoptosis is the molecular mechanism hidden beyond the synergistic effect of drug combinations in transporter-expressing cells (Figure 3). 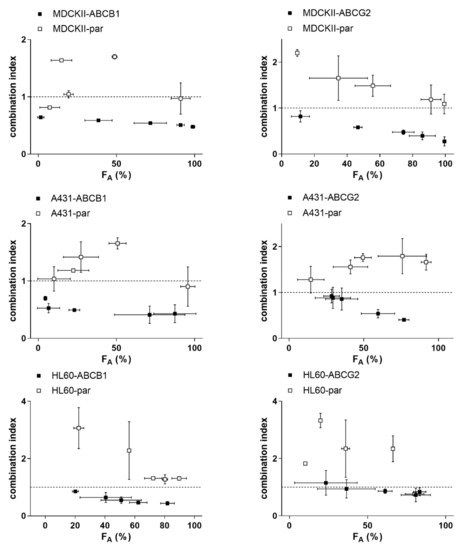 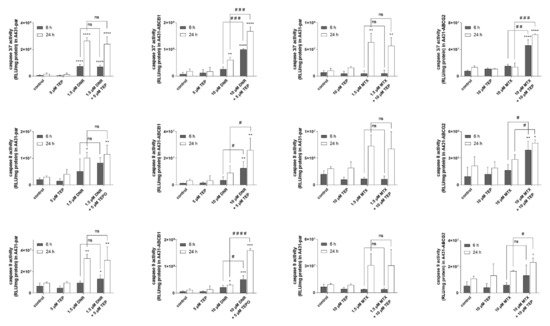 The possible clinical impact of our in vitro drug combination results was evaluated in patient-derived NSCLC explants. We have selected six primary cultures with variable expressions of ABCB1 and ABCG2 (Figure 4A). Model inhibitors and tepotinib significantly increased the accumulation of model anticancer drugs in some of the primary samples, predominantly those with higher transporters’ expression levels (Figure 4B). Importantly, we also found a possible association between the outcomes of accumulation experiments and drug combination assays. Drug combinations in samples, which exhibited high levels of transporter expression and significant changes in the accumulation of probe anticancer drugs, predominantly generated synergistic outcomes. In contrast, major effects in samples with opposite properties were additivity or antagonism (Figure 4C). Mutual dependencies of outcomes of expression/accumulation/combination experiments were not absolute, likely due to primary nature of tumor samples (possible presence of SNPs in transporters’ sequence, varying expression of other transporters affecting accumulation of probe cytotoxic drugs, alterations in pharmacodynamic target etc.). However, these data confirm the potential of tepotinib to become a valuable MDR modulator for NSCLC patients with tumors positive for high ABCB1/ABCG2 expression. 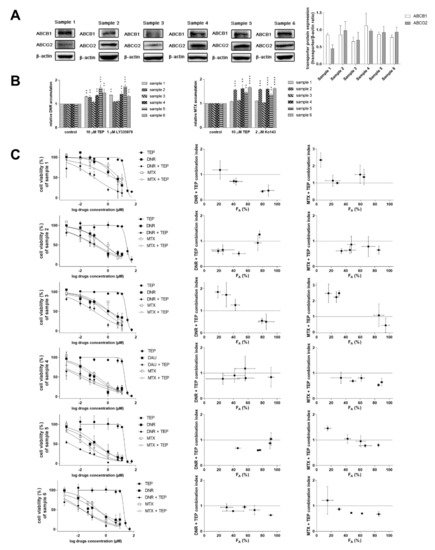 Figure 4. Tepotinib synergizes with MDR victim cytostatics in patient-derived NSCLC explants. (A) Expression levels of ABCB1 and ABCG2 (left, representative images; right, quantitative densitometric analysis). (B) Effect of tepotinib and model inhibitors on the accumulation of mitoxantrone and daunorubicin. (C) Antiproliferative effects of tepotinib, mitoxantrone, daunorubicin and their combination (10 µM tepotinib was applied as MDR modulator in combinations). Treatments with vehicle-containing media and 40% DMSO in media were used as 100% and 0% viability controls for data normalization, respectively. Combination index analysis of obtained data is shown near to viability curves. Combination outcomes can be synergistic (CI < 0.9), additive (0.9 < CI < 1.1), or antagonistic (CI > 1.1). DNR, daunorubicin; FA, fraction of cells affected; MTX, mitoxantrone; TEP, tepotinib.