Grazing-fed cattle are free-ranged on pastures with grass as the main feed, while feedlot-fed cattle are raised in feedlots with grains as their main feed. The grass is low in energy but high in fiber, on the contrary, grains are high in energy and easy to digest. Thus, there are significant differences between the two feeding methods in digestibility, growth rate and meat quality. Compared to feedlot-fed beef, grazing-fed beef has lower fatty acid content and higher vitamin content [1]. Because nowadays people are concerned about energy and nutritional balance, consumers are increasingly favoring grazing-fed beef [2]. The proportion of grazing-fed cattle breeding has been gradually increasing as a result of this consumer preference.
Cattle gut microbes interact with their host and participate in the host’s physiological activities such as food digestion, energy metabolism and nutrient absorption, which are closely related to the healthy growth state and methane emissions of the host. Cattle gut microbes are affected by various factors, among which the composition and nutrition of the diet is a key factor in shaping its community structure, abundance and activity. Firmicutes, Bacteroidetes, Proteobacteria, TM7 and Actinobacteria were the main dominant phylum in cattle feces, and their abundance changed significantly with different diets [3]. Firmicutes was the first dominant phylum followed by Bacteroidetes, Proteobacteria, TM7 and Actinobacteria in moderate grain and high grain diets, while Firmicutes was the first dominant phylum followed by TM7, Actinobacteria, Proteobacteria and Bacteroidetes in silage/forage diets [4]. The fecal Firmicute:Bacteroidetes ratio was smaller when beef were fed more than 10% of dietary distiller grain compared with that of a corn diet [5]. There is a tendency to a greater relative abundance of Bacteroidetes but lesser Firmicutes in fecal matter after adding antibiotics or dried yeast to the beef diet [6]. Firmicutes, Bacteroidetes, and Verrucomicrobia were also the dominant phyla in yak, and the Firmicute:Bacteroidetes ratio was significantly decreasing from winter grassland to feedlot feeding [7]. In dairy cattle, diet was the most important parameter to explain fecal microbiota richness, and fecal microbiota of mixed (forage and concentrate) diet was more richness than that of dry forage diet [8]. 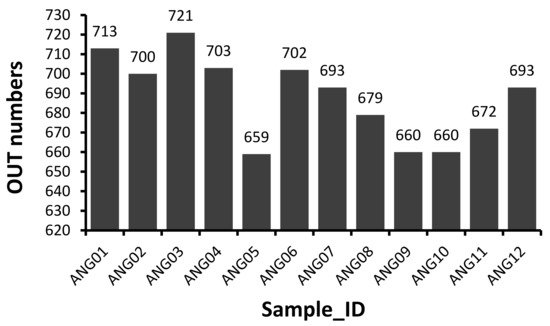 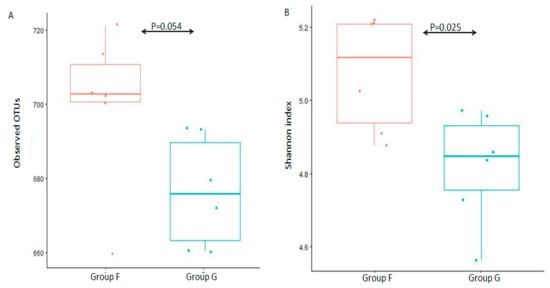 Figure 2. Box-plot representation of alpha diversity. Fecal microbiota were evaluated by the number of observed OTUs (A) and Shannon index (B) between group F and group G.
Principal coordinated analysis (PCoA) based on the binary Jaccard and Bray Curtis methods of beta diversity were further used to analyse compositional differences in fecal microbiota between group F and group G. The animals clustered together according to their particular group, suggesting a compositional shift with respect to community membership and structure between different groups. Both Jaccard and Bray-Curtis distance-based PCoA showed a significant difference between group F and group G (Figure 3, ANOSIM, p < 0.05), which indicated that each group hosts its own distinct bacterial community. 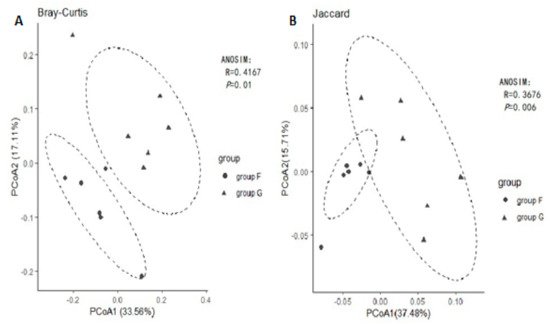 4. Analysis of Bacterial Taxonomy and Function 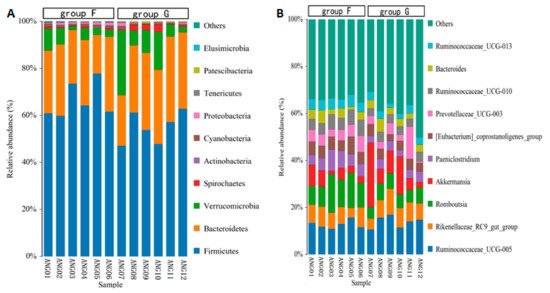 Figure 4. Relative abundance of fecal microbiota at the phylum level (A) and at the genus level (B).