Dickkopf-related protein 1 (DKK1) is distinctly identified as an inhibitor of canonical Wnt/β-catenin signaling.

Hair growth is a relatively complex process. The human hair cycle comprises three main phases: anagen, catagen, and telogen [1]. Anagen is an active growing phase of hair and lasts for the longest period (up to eight years). During the catagen phase (2–3 weeks), hair follicles (HF) undergo regression. This is followed by the telogen, which is the resting phase (~3 months) [2]. Ultimately, hair shedding takes place, that may be considered as the fourth phase—exogen [3][4].
Hair growth is controlled and influenced by various endogenous factors, including intracellular and intercellular signaling molecules. Some of the influencing factors have inhibitory and some stimulatory effects on the hair cycle. The initiation of the anagen phase is inhibited by the activation of bone morphogenetic proteins (BMP) as well as transforming growth factor β (TGF-β) signaling [2]. On the other hand, the onset of Wnt/β-catenin [5][6][7] or sonic hedgehog (SHH) signaling pathways stimulate hair growth and anagen entry [2][8]. In case of the wingless and integrated-1 (Wnt)-mediated hair regrowth, hypo-phosphorylated β-catenin is stabilized, which triggers the interaction between β-catenin and T-cell factor/lymphoid enhancer factor (TCF/LEF) in the nucleus. As a result, growth-promoting genes are trans-activated and hair regrowth occurs [2]. Based on the available data, out of all the pathways implicated in the hair cycle, we assume that the Wnt/β-catenin signaling represents the key factor in hair growth regulation [9], as dihydrotestosterone (DHT)—a hormone that is upregulated in androgenetic alopecia (AGA) and causes the hair loss—impairs this signaling pathway [10]. The main identified inhibitors of this signaling pathway are dickkopf-related protein 1 (DKK1), secreted frizzled-related protein 2 (SFRP2), and sclerostin (SOST). As Wnt/β-catenin signaling is involved in numerous biological processes, each of the mentioned inhibitors features certain functions. Hence, the dysregulation of the levels of any of these inhibiting proteins affects the particular physiological pathogenesis, including AGA. DKK1 is a natural inhibitor of Wnt, and strongly suppresses the Wnt/β-catenin signaling pathway via disrupting the Wnt-induced frizzled-low-density lipoprotein receptor-related proteins (LRP) 5/6 complex formation. This adversely impacts HF morphogenesis and, thus, influences the hair cycle [11]. Indeed, the study has demonstrated that DKK1 triggers anagen-to-catagen transition when injected in the skin of C57BL/6 mice. Moreover, injection of the anti-DKK1 neutralizing antibody resulted in the delay of catagen progression [12]. Interestingly, the human study showed that a significantly high concentration of tissue DKK1 was present in patients with AGA compared to the healthy controls [11]. DHT is known to negatively interfere with the normal hair cycle via driving the HF in the balding scalp to catagen entry and inhibiting the growth of keratinocytes that takes place through DKK1 implication [13].
According to the aforementioned evidence, it is prudent to postulate that inhibition of DKK1—a canonical Wnt/β-catenin signaling inhibitor—is one of the key factors to promote hair growth and develop a sustainable remedy for AGA. Indeed, there are certain microRNAs (miRNAs) that target DKK1 and are involved in hair growth-related pathways.

DKK genes encode secreted proteins that regulate the Wnt/β-catenin signaling pathway by antagonizing it [14]. Remarkably, DHT and DKK1 levels are positively correlated. In the body, 5 alpha-reductase (5αR) converts testosterone into DHT. It acts like an inhibitor for the growth of outer root sheath (ORS) cells that disrupts the normal hair growth process. Moreover, the anti-DKK1 neutralizing antibody substantially decreased the inhibition of ORS cells’ growth. As previously mentioned, DKK1 concentration is increased in the bald scalp of AGA patients compared with the haired scalp of AGA patients [10][15]. Besides, DHT-influenced DKK1 augmentation has been demonstrated to enhance the apoptosis of keratinocytes in vitro [10]. It can be presumed that DKK1 plays an important role in AGA development. Indeed, the study demonstrated that DKK1 is involved in AGA pathology. In the study, recombinant human DKK1 treatment triggered the hair cycle to enter the catagen phase earlier than normal in C57BL/6 mice, which resulted in the decrease of HF length. Contrarily, treatment with the neutralizing DKK1 antibody led to the increased HF length and delayed the shift of anagen to catagen. The recombinant DKK1 has inhibited the canonical Wnt/β-catenin signaling pathway that promotes hair growth in normal physiological condition. As a result of Wnt/β-catenin signaling suppression, the anagen phase is shortened and the apoptosis of follicular keratinocytes takes place [12].

DKK1 exhibits a dual role in the normal hair cycle. On the one hand, DKK1 induces attenuation of the hair growth process by inhibiting Wnt/β-catenin signaling via the LRP5/6 co-receptor and, on the other hand, it promotes apoptosis of keratinocytes, which are key cells involved in hair growth [10][15]. Hence, AGA, also known as male pattern baldness (MPB), is the consequence of the abovementioned dual mechanism of DKK1 in human HFs. Indeed, a case-control study that included 20 male AGA and 20 male alopecia areata (AA) patients has demonstrated that the immunohistochemical expression of DKK1 was remarkably increased in lesional scalp biopsies of both AGA and AA patients [15]. Additionally, DKK1 decreases the HF enlargement and width of the hairs [16]. Markedly, DKK1 levels are evidenced to be elevated along with age [17][18], whilst age is also related to the development of AGA [19] (Figure 2). Besides, AGA is manifested severely in the obese population [20][21]. Concomitantly, DKK1 is hypothesized as a potential biomarker in obesity [22][23]. Additionally, Kim et al. have demonstrated that treatment with minoxidil—a common drug for hair-loss—downregulated DKK1 and TGF-β in human keratinocyte cells [24]. 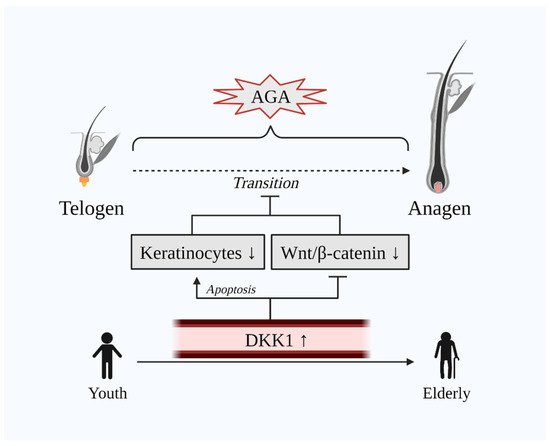 Figure 2. Dual unfavorable role of DKK1 on hair growth. The transition of telogen to anagen is delayed in AGA. DKK1 is upregulated in the scalp of AGA as well as in the serum of the elderly population where AGA is common. Elevated DKK1 levels induce the apoptosis of keratinocytes and inhibit Wnt/β-catenin signaling. Abbreviations: AGA, androgenetic alopecia; DKK1, dickkopf-related protein 1; Wnt, wingless and integrated-1. 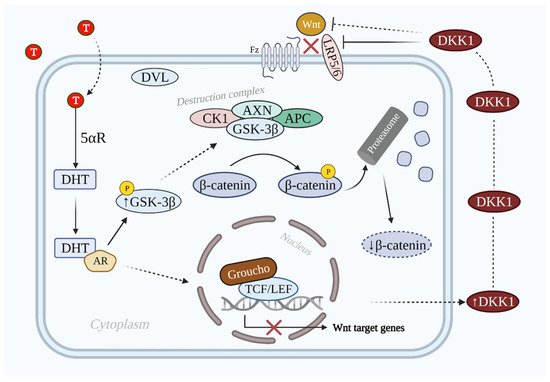 According to the abovementioned information, the study of DKK1 inhibition strategies is an important tool for maintaining the Wnt/β-catenin signaling within the normal range. Indeed, some studies investigated the effect of certain natural compounds on the canonical Wnt/β-catenin signaling pathway for promoting hair growth. Zhou et al. have observed the impact of morroniside—a natural compound found in cornelian cherry—on the Wnt/β-catenin signaling pathway in cultured human ORS cells. In their results, morroniside indeed increased the proliferation of cells as well as the concentration of β-catenin. Concomitantly, the outcome of morroniside treatment was retrieved by the influence of DKK1 [25]. Another natural compound, vitexin, is also found to significantly increase the human dermal papilla cells’ (HDPCs) proliferation in a concentration-dependent fashion. Additionally, Luo et al. have demonstrated that in vitexin-treated HDPCs, the β-catenin level was upregulated while the DKK1 level was substantially lowered [29]. Aside from that, Panax ginseng extract exhibited proliferation of ORS keratinocytes, inhibition of apoptosis, and revealed the opposite effect of DKK1 in human hair organ culture [30]. One more natural compound costunolide activates Wnt/β-catenin and SHH, while it inhibits TGF-β/SMAD and BMP signaling pathways in HFs, and hence, stimulates hair growth [31]. The functional components of Ginkgo biloba—ginkgolide B and bilobalide—are known as agents that can aid in hair growth. Interestingly, these two compounds are evidenced to be associated with Wnt/β-catenin signaling activation via inhibition of DKK1 expression levels in the cytoplasm and, thus, upregulation of nuclear β-catenin and its messenger RNA (mRNA) concentration [32]. The antidepressant tianeptine is also evidenced to stimulate hair shaft elongation, and hence hair growth, via inhibiting DKK1 and delaying the premature transition from anagen to catagen in MPB [33]. All these studies claim that the abovementioned natural compounds promote hair growth via inhibiting DKK1.

miRNA was first identified in 1993 by Victor Ambros and colleagues, who found a short RNA molecule Lin-4 of 22–61 nucleotides in C. elegans that could downregulate the level of Lin-14 protein mRNA [34]. Seven years after the discovery, the first human-encoded miRNA Let-7 was described [35]. Currently, more than 3000 miRNAs are known to be present in the human genome and involved in numerous biological processes in almost all body fluids [36][37]. In 2013, the first miRNA mimic MRX34 (mimic of endogenous miR-34 that suppresses oncogenesis) entered into the clinical trials [38]. Currently, several miRNA drugs are in phase 1 or 2 of development [39][40]. However, up until now, there is no miRNA mimic approved by the Food and Drug Administration (FDA) [40]. On the other hand, there are already 3 small (short)-interfering RNA (siRNA)-based FDA-approved drugs, Patisiran [41], Givosiran [42], and Lumasiran [43], while the rest are in phase 3, 2, or 1 of clinical trials [40]. Given that it took 14 years since the initiation of the very first clinical trial (2004) [44] for siRNA to go to commercialization [45][46], it should not be long until the first miRNA mimic gains FDA approval. However, difficulties mainly regarding the delivery of miRNAs need to be overcome and the mechanisms of certain miRNAs should be fully understood.
Importantly, miRNAs play a crucial role in hair growth regulation [47]. They are involved in HF development as well as in DP cell proliferation. However, despite the increasing number of studies that demonstrate a critical role of miRNAs in skin regeneration, the molecular mechanisms are still not fully understood [48]. Some miRNAs that are implicated in hair morphogenesis have a positive while some have a negative impact on hair growth, e.g., one study showed that miR-214 targets β-catenin and modulates Wnt/β-catenin signaling, and hence inhibits hair growth development [49]. On the other hand, other miRNAs, such as miR-218-5p, are related to inhibition of SFRP2 that represents the antagonist of the Wnt/β-catenin signaling pathway and, thus, promotes hair growth [50][51]. As stated above, the level of DKK1 in the scalp of AGA patients is significantly higher [15]. Besides, DKK1 is already evidenced to inhibit the Wnt/β-catenin signaling, which results in hair miniaturization and growth suppression [52]. There are miRNAs that target DKK1, e.g., miR-335-5p is downregulated while DKK1 protein levels are increased in TNF-α-treated osteoblasts [53]. DKK1 is silenced by miRNAs including miR-335-5p at an early stage of osteogenic differentiation, and on the contrary, miRNA levels are decreased at a later stage of differentiation while DKK1 levels are upregulated. This points out the complex role of miRNAs in biological processes [54]. Besides, Michel et al. have demonstrated that the expression of Wnt antagonist SFRP2 mRNA was increased while the expression of another inhibitor DKK1 mRNA was not altered in scalp biopsies of AGA patients [55]. This fact might be rationalized with the involvement of certain miRNAs that target DKK1 mRNA, and the translation to protein is circumvented. Accordingly, developing the miRNA-based approach to inhibit DKK1 is certainly reasonable. The miRNAs that inhibit DKK1 expression in different health conditions/biological processes are presented in Table 1.
Table 1. Recent studies referring to miRNAs that directly target DKK1 and the association with certain disorders/biological processes.
Notes: Dots between miRNA and DKK1 sequence indicate wobble pairing. N/A, not applicable. *, These binding sites are cited from TargetScan.org.