Toxoplasma gondii is a parasite that can cause serious disease in humans, especially in pregnant women.

Toxoplasma gondii is the most widespread zoonotic protozoan parasite that has a wide range of warm-blooded hosts at its disposal. Sexual replication of T. gondii occurs in the intestine of felines, which are the end host of the protozoan parasite. Humans and most animals are considered intermediate hosts because they harbor tissue cysts containing tachyzoa [1]. It is estimated that one-third of the human population is infected with T. gondii [1]. Prenatal infections can lead to severe problems and even death [2], whereas postnatal toxoplasmosis, although rare, can cause eye and behavioral problems [3][4][5][6][7][8]. Humans can become infected in several ways: 1. by ingesting oocysts shed by cats, 2. by consuming food or water contaminated with oocysts, or 3. by consuming undercooked meat containing the encysted parasite [9][10][11][12]. Up to 50% of human toxoplasmosis cases are foodborne. Consumption of undercooked meat products containing T. gondii tissue cysts is the main risk factor for infection [13][14][15]. Although meat from domestic pigs is of greater concern [15], consumption of wild boar (Sus scrofa) meat has gained popularity [16][17]. This is mainly due to the successful spread of the species in the environment [17][18] and an increase in recreational hunting [16][17]. Wild boar, as omnivores, can contract toxoplasmosis by consuming food or water contaminated with sporulated oocysts or by ingesting infected tissues from other intermediate hosts [19]. The global seroprevalence of T. gondii in wild boar is estimated at 23%, with the highest seroprevalence being 26% and 32% in Europe and North America, respectively [17]. This high prevalence of toxoplasmosis makes wild boar a suitable biological model for the dynamic assessment of T. gondii in the environment where the wild boar population is constantly present [17][20]. Currently, there is no surveillance program for T. gondii-infected meat intended for human consumption [17], although the European Food Safety Authority (EFSA) has identified T. gondii as a relevant biological hazard that needs to be addressed [21]. The significant increase in the Central European wild boar population in recent years means an even greater risk of human and animal exposure to T. gondii [22].

Wild boar serum samples (n = 353) were collected in 2016 and 2017 from apparently healthy, free-ranging animals throughout Slovenia as part of the national surveillance program for brucellosis and African swine fever. Game wardens and hunters were asked to submit samples from animals shot during the regular annual harvest. Hunters were also instructed on procedures before sample collection and were provided with field sample kits. Shortly after death, blood samples were collected from the jugular vein or the heart. The samples were transported to the veterinary faculty at the University of Ljubljana, where the serum was obtained and stored at −20 °C until testing for Toxoplasma antibodies. Only animals whose harvest location, sex, age, and weight were recorded by the hunters were used for this study. The animals’ weights were determined by using a scale. The age of the animals was determined by tooth eruption, replacement, and wear. 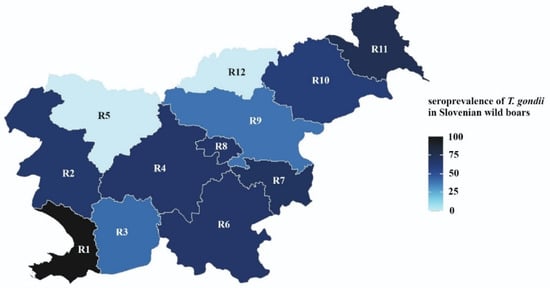