Abandonment of agricultural land is currently one of the main land use changes in developed countries. This change has an impact at the economic level and from the point of view of conservation. Therefore, recovering these areas after abandonment is, in many cases, necessary for ecological restoration, especially as they can be invaded by exotic or dominant species, preventing recovery of the original plant species community. The objective of this study is to examine changes in plant species richness and composition after the application of different treatments to eliminate Amelichloa clandestina, a species that dominates pastures abandoned 12 years ago in an area located in northern Mexico. The area is a semi-desert grassland dominated by buffalo grass Bouteloua dactyloides.

Urbanization and the abandonment of agricultural land are currently among the main changes in land use in developed countries [1] and can lead to loss of diversity and cultural values [2][3]. Moreover, a further increase in land abandonment is anticipated in the near future [4].
In general, the cessation of extensive farming in the developing world has led to a substantial increase in dry grasslands and dwarf shrublands in marginal lands [5]. Such changes in vegetation patterns may be an indication of the onset of desertification in arid areas. However, in some cases, positive aspects can arise from land abandonment such as changes in vegetation cover, affecting water availability and soil properties [6][7]. The abandonment of traditional agricultural lands in some areas often leads to fields that require restoration. Indeed, intensive agriculture in the past and rapid environmental change are hindering original plant community recovery. Thus, the restoration of these abandoned fields should be considered a requirement [8][9].
After abandonment, the dominance of some species (including exotic species) may alter patterns of vegetation recovery in disturbed sites [9], even where native species have enough propagules to recolonize through natural dispersal [10][11][12]. Thus, management through different tools is required to restore, to some degree, the ecological processes of the plant community (native species, regeneration, species richness, etc.) [13][14].
In this study, we evaluated an area that after 12 years of agriculture abandonment has been completely dominated by Mexican needlegrass (Amelichloa clandestina), unpalatable for vertebrate grazers and native to northern Mexico. This species has been expanding across abandoned fields in northern Mexico and Texas [15]. Changes after agriculture abandonment are evident in many aspects, and the most relevant are related to erosion, changes in nutrients, and alteration of ecological processes such as species richness and maintenance [16][17]. Therefore, the objective of this study is to examine changes in plant species richness and composition after the application of different treatments to eliminate a species that dominates pastures due to agriculture abandonment. Elimination was conducted through chemical methods, clipping, and burning to evaluate the restoration possibilities of these management tools. We hypothesized that burning would increase species richness due to the clearing of the biomass and nutrient incorporation through mineralization, while herbicide and clipping would have a more significant effect on the A. clandestina cover due to elimination after six months of treatment application.

The study was carried out in an area after 12 years of agriculture abandonment. This area was colonized by Amelichloa clandestina, a plant that completely dominated the site and significantly reduced species richness. Farmland abandonment constitutes a major land use change, with its importance acknowledged today due to the implications it has for biodiversity and cultural values [1][18]. We suggested the use of three different management techniques in the area in order to increase native plant community and species composition. Mechanical treatments, such as clipping, reduce biomass and give species present in the seed bank the chance to occupy the open area, but these seeds will need to grow faster than the target species Amelichloa clandestina. In the case of herbicide treatment, glyphosate is a very potent one [19], whose usefulness in weed control has been recognized for over 25 years [20]. However, having no specific effect on the target species (it affects all the species treated), it is necessary to analyze its impact on the plant community before generalizing its use. Finally, burning is a useful management tool for preventing large wildfires [21], though it can have significant effects on diversity [22] and species composition [23], depending on how and where it is applied.
With regard to the plots, all of them presented similar environmental conditions (altitude, aspect, slope, and rock cover). However, plot characteristics related to the treatments revealed significant differences, as in the case of grass cover, with lower values in the herbicide plots and the highest values in the control plots. By contrast, forbs presented the largest cover in the herbicide-treated plots and lower cover in the control and clipped plots. Herbicide affected the dominant grass, favoring the cover of forbs (Table 1).
Table 1. General abiotic and plant community information of the plots (* Spc: Species richness; #: number). Average values and standard deviation (Std) for the information of the different variables are also included.
(**) The letters indicated the treatment as CL: clipping; H: herbicide; B: burning; C: control.
In the case of species richness, the burned plots presented the highest values (greater than 10 species more, on average, than control plots). This is an expected value, as most sources suggest an overall trend of increasing species richness after fire [24][25][26]. In most cases, this increase in richness occurs during the first-to-second year after fire and is related to herbaceous pioneer species [27], which are linked to canopy opening and higher light availability at the soil surface after fire [28]. In addition, herbicide plots presented a significantly high value of species richness due to the impact of the herbicide on the dominant grass, Amelichloa clandestina, as the open space allowed the occupancy of forbs, which have a faster response to this management (Figure 1A). 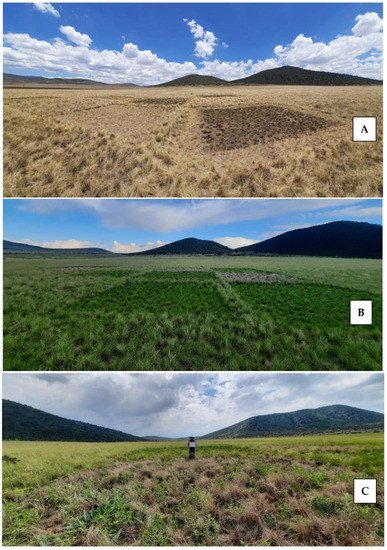 Figure 1. Grassland of Mexican needlegrass (Amelichloa clandestina): (A) application of burning and clipping treatments in foreground of the photo; (B) response of the grass after application of treatments and during the rainy season in the following summer; (C) plot where the herbicide glyphosate was applied, in which a greater richness of species can be observed.
Non-significant differences were found for evenness among treatments, and although on average, control plots presented lower values (related to the dominance of Amelichloa clandestina), high variability did not allow for significant differences (Figure 1B). In the case of cover, A. clandestina showed some differences between treatments, with significantly lower values in the herbicide plots (F3,20 = 129.63, p < 0.01.; Figure 1C).
In the case of species composition, the treatment that most differed from the control plots was burning, revealed by axis II of the DCA analysis. Some were more abundant in the control plots with respect to the treated plots, such as Solanum elaeagnifolium, Solidago velutina, Hesperostipa comata, Muhlenbergia rigida, or Townsendia mexicana, indicating they were favored after the abandonment of these fields, while in the case of the burned plots, Bouteloua curtipendula, Panicum hallii, Erioneuron avenaceum, or Muhlenbergia torreyi dominated, all of them grasses, alongside the forb Taraxacum officinale or Erodium cicutarium, both exotic forb species. Amelichloa clandestina was more abundant in the control and clipped plots, but its presence was reduced by the other treatments. The lowest cover of A. clandestina was present in the herbicide-treated plots.
The RPPP significantly differed between the groups, and the ANOSIM pair tests analyses revealed that species composition was different between control plots and burned and herbicide plots. The clipping did not produce any important difference with respect to the control plots, very likely due to the regrowth of perennial forbs, although mechanical removal has been effective in other experiments in different areas [29].
Indicator species of the burned plots that were identified in the analyses were all annuals (in some cases introduced ones, such as Erodium cicutarium or Parthenium hysterophorus). Other authors have found that competition from perennial grasses limits shrub production [30][31]. Eruca sativa, an introduced annual, characterized the herbicide plots and the native perennial forb, Townsendia mexicana, dominated the control plots.
Based on the results, two treatments appear to be more suitable approaches: burning, as a treatment to favor the increase in species richness, and herbicide to keep the dominance of Amelichloa clandestina under control. Regardless, we can discard the clipping methods, as the impact is very limited. Burning and herbicide treatments have the highest impact on species richness and composition in these highly disturbed rangelands.