Terpenoids in and beyond Cannabis Plant

Cannabinoids is a vast term that defines several compounds that have been characterized in three categories: (i) endogenous, (ii) synthetic, and (iii) phytocannabinoids, and are able to modulate the CBR and ECS. Particularly, phytocannabinoids are natural terpenoids or phenolic compounds derived from Cannabis sativa. Cannabimimetic ligands, beyond the Cannabis plant, can act as CBR agonists or antagonists, or ECS enzyme inhibitors, besides being able of playing a role in immune-mediated inflammatory and infectious diseases, neuroinflammatory, neurological, and neurodegenerative diseases, as well as in cancer, and autoimmunity by itself.

1. The Era of Cannabis sativa, Cannabinoids, and the Endocannabinoid System: A Long Journey Traveled 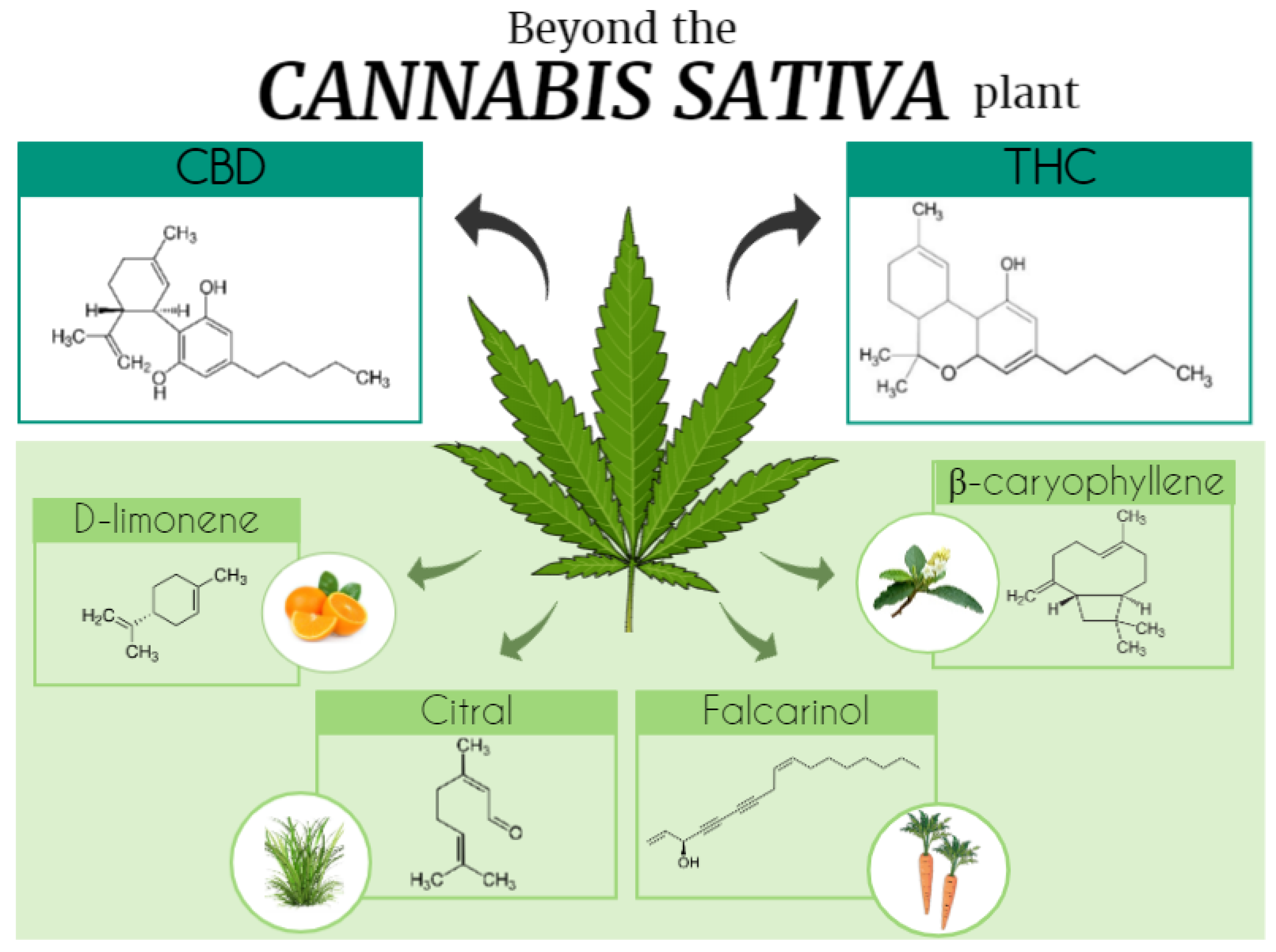 Figure 1. Beyond the Cannabis sativa plant. The Era of cannabinoids started with the description and isolation of the main Cannabis sativa psychoactive component, Δ9-tetrahydrocannabinol (THC). However, many other natural compounds were also identified, totalizing 565 substances among cannabinoids and non-cannabinoids constituents. This figure illustrates some of the Cannabis sativa compounds (d-limonene, β-caryophyllene, citral, and falcarinol) and its molecular structures that can be also found in other plants, such as Cordia verbenacea, lemon, Cymbopogon citratus, and carrot. CBD, cannabidiol. Figure created using the Mind the Graph platform.

The phytocannabinoid class includes more than a 100 compounds that are present in the Cannabis sativa plant [66], which interact with components of the human ECS, briefly addressed in this section. Phytocannabinoids production is dependent on plant internal factors (synthesized hormone levels, plant kind, and parts of the plant) and on external factors (humidity, light, type of soil, and temperature). The most elucidated compounds among the main phytocannabinoids are CBN, CBD, ∆8- e ∆9-THC, cannabigerol, and cannabivarin. The ∆9-THC is the major psychotropic compound found in high concentrations in the Cannabis sativa plants. It is classified as a CB1R and CB2R partial agonist, showing preference for the CB1R. The agonist activity on CBR triggers adenylyl cyclase (AC) inhibition and, thereby, the ability of modulating different neurotransmitters release as dopamine, acetylcholine, glutamate, and gamma-aminobutyric acid (GABA) [66]. Of note, phytocannabinoids not only bind to CBR, but also show potential actions on different kinds of receptors, such as peroxisome proliferator-activated receptors (PPAR), glycine receptors, and the transient receptor potential (TRP) cation channels. The CBD, unlike the tetrahydrocannabinol (THC), is a non-psychotropic cannabinoid that has been widely investigated regarding its potential therapeutic use. It has been already established in the literature that CBD shows anti-inflammatory, anti-epileptic, analgesic, anxiolytic, and neuroprotective properties, as well as it can be used to mitigate Parkinson’s disease (PD) symptoms [67][68][69]—Table 2. CBD acts as a negative allosteric modulator of CB1R [65] and as an inverse agonist in CB2R, besides being a FAAH enzyme inhibitor.
To briefly highlight, many other phytocannabinoids (e.g., cannabigerol, cannabichromene, and cannabinol) showed significant therapeutic value. The cannabigerol (CBG) showed agonist and antagonist activity on TRP channels and it was also able to produce 5-HT1 and CB1R antagonism [70]. Additionally, CBG is an AEA reuptake inhibitor [71], and it showed colon anti-tumor activity by inhibiting transient receptor potential melastatin 8 (TRPM8) channels [72]. Relevantly, when associated with CBD, it demonstrated anti-inflammatory activity reducing tumor necrosis factor (TNF) expression and upregulating Interleukin–10 (IL-10) and Interleukin–37 (IL-37) levels [70]. Cannabichromene (CBC) showed agonist activity on CB2R [73]. Besides, it interacts with TRP channels, being suggested as a potential therapeutic resource for the treatment of pain and inflammation [71]. Lastly, CBN showed similar therapeutic properties to other phytocannabinoids, such as anticonvulsant, anti-inflammatory, and antibacterial [71]. In addition, CBN showed inhibitory activity on cyclooxygenase (COX), lipoxygenase (LOX), and P450 cytochrome enzymes [71], as well as on keratinocyte proliferation, supporting a possible potential therapeutic for psoriasis cases [74]. As it can be appreciated with the major phytocannabinoids, the wide ranges of possible interactions of these molecules with multiple targets in our body, demonstrates the magnitude and the complexity of phytocannabinoids acting in living organisms.
We just established that phytocannabinoids demonstrate different pharmacological effects, and it can get even more intriguing and complex when we focus on previous data describing that the combined use of some phytocannabinoids can possibly increase the positive effects proportionate by them. For instance, the use of CBD associated with ∆9-THC promoted downregulation of the neuroinflammatory process in animal models of multiple sclerosis (MS) [75], besides, reducing pain [76] and muscle spasticity in MS patients [75]. Importantly, CBD attenuated the psychotropic effects of THC when used in a combined form [75]. This last piece of data supports the hypothesis that CBD binds to an allosteric site on CB1R that is functionally distinct from the active site for 2-AG and THC [77]. In this same context, a recent study reported that a botanical drug preparation (BDP) was more potent than pure THC to produce antitumor responses in cell culture and animal models of breast cancer. While pure THC mainly activated CB2R and generated reactive oxygen species (ROS), the BDP modulated different targets and mechanisms of action [78]. This combined effect, observed with the association of phytocannabinoids and other compounds present in the Cannabis sativa plant, such as terpenoids, is known as the entourage effect [79] (Figure 2). 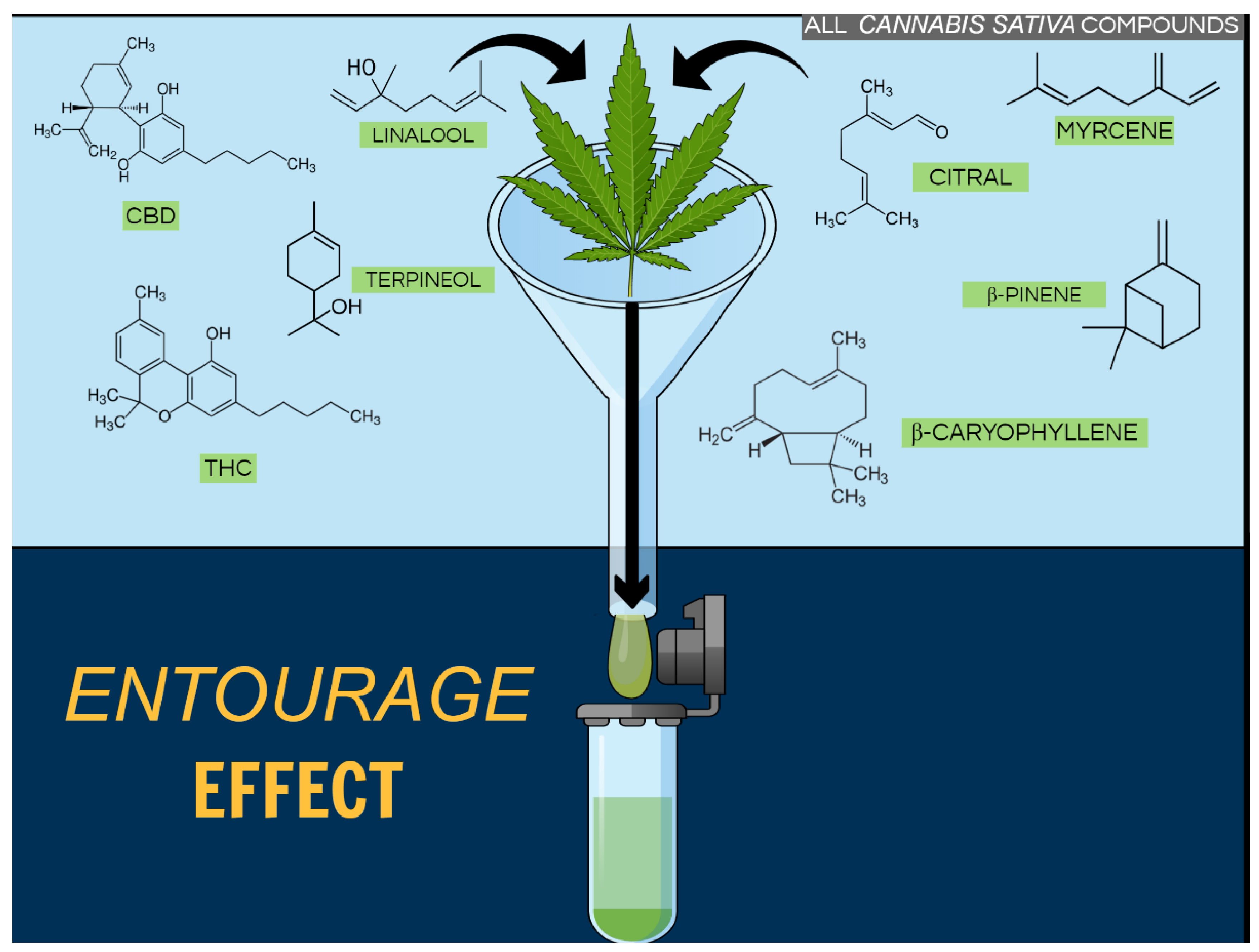 Figure 2. Entourage effect. Beyond the Δ9- tetrahydrocannabinol (Δ9-THC) and cannabidiol (CBD), there are many compounds present in Cannabis sativa, including terpenoids (such as linalool, terpineol, and citral), which could contribute to beneficial effects related to this plant. However, the underlying mechanism of these medicinal effects is largely unknown when molecules are associated. Figure created using the Mind the Graph platform.

Beyond the phytocannabinoids, the Cannabis plant is able to produce a diversity of compounds. Thirty-one-years ago, Mechoulam and Ben-Shabat described what they named the ‘’entourage effect’’, suggesting interactions between Cannabis “inactive” metabolites and closely related molecules could markedly increase the activity of the “primary” cannabinoids (Figure 2). From this, it was possible to hypothesize that could be a contribution of “minor cannabinoids” and Cannabis terpenoids to the plant overall pharmacological effect. Therefore, a recent study evaluated the effect of common terpenoids, by themselves and in combination with THC, in AtT20 cells expressing CB1R or CB2R. Surprisingly, none of the analyzed terpenoids modulated the THC phytocannabinoid agonist signaling. Thus, the authors suggested that if the phytocannabinoids–terpenoids entourage effect exists, it is not at the CB1R or CB2R receptor level [80]. Corroborating, when rats were submitted to an abdominal writhing model and treated only with terpenoids they demonstrated increased abdominal writhing, while the animals treated with THC showed robust analgesia, even better than the rats that received the Cannabis full extract. In this case, Cannabis antinociceptive property was linked to Δ9-THC, since terpenes alone do not alter the nociceptive behavior [81]. Using a different approach, Nandal and co-authors exposed cancerous cell lines to treatment with phytocannabinoids combined with low concentrations of co-related terpenoids. They observed increased cell mortality at ratios similar to the ones obtained with the natural plant extracts [82]. According to the authors, their results differed from Santiago et al. findings because they evaluated terpenoids without statistical correlation to THC, meaning that terpenoids concentrations in their preparations where higher than the natural-occurred in the plants [80][82]. Thus, the possible “entourage effect” and the positive contribution derived from the addition of terpenoids to cannabinoids could be interpreted as uncertain. However, the study of terpenoids represents an open window that goes beyond its actions (i) in the endocannabinoid system solely, or (ii) as mere phytocannabinoids passive co-authors, and even beyond the Cannabis plant.

3. Terpenoids in and beyond the Cannabis Plant

Cannabis contains a large number of monoterpene and sesquiterpene compounds, together called terpenoids or terpenes, which are aromatic compounds synthesized in trichomes [71]. In the plant, these compounds (i.e., more than 120 terpenes) synthesized alongside phytocannabinoids are important volatile constituents that are responsible for the plant’s characteristic smell and also serve for different organic functions, such as insect repellent, repellent to herbivore attack, and attractive to pollinators [71]. Booth and Bohlmann described the terpenes- and cannabinoid-rich resin as the most valuable cannabis products, with different psychoactive and medicinal properties [83]. Studies regarding terpenoid compounds (i.e., D-limonene, β-myrcene, α-pinene, α-terpineol, β-pinene, β-caryophyllene, and others) have been growing in the last decades due to their large number and extensive employability [71][84]. However, the presence of terpenoids has not been restricted to the Cannabis sativa plant. These compounds normally occur in several other plant species, such as Mirabilis jalapa, Lithophragm glabrum, Cordia verbenacea, Eucalyptus globus, Syzygium aromaticum, Senna didymobotrya, Cymbopogon citratus, and in some Citrus genus plants, as Citrus limon and others. To date, there are more than 10,000 articles versing about phytocannabinoids or cannabimimetics, and its actions described in the literature. There are many Cannabis terpenoid compounds that are not majorly found in the Cannabis plant but are highly expressed in other plants. Its actions are varied and complex, being many compounds studied deep down to the mechanisms of action, pharmacokinetics, toxicity, and pharmacodynamics, whereas others are still to be addressed regarding these aspects. The study about terpenoids beyond the Cannabis plant has been earning ground in the research field due to the fact that they can be utilized as tools for the improvement of therapeutic research for several diseases.