Agarwood is a highly economically important medicinal herb with widespread uses; however, the difference between the biological activities of artificial and wild agarwood is unclear.

Agarwood is a medicinal herb produced by Aquilaria of the Thymelaeaceae family. The 21 Aquilaria species are mainly distributed in approximately 20 countries from India to Malaysia to Papua New Guinea [1]. In China, they are mainly distributed in Guangxi, Guangdong, Yunnan and Hainan, among which Aquilaria sinensis and Aquilaria yunnanensis are endemic [2]. According to records, the utilization history of agarwood can be traced back to more than 2000 years ago [3], and its unique components are commonly used in the fields of incense, medicine, and religion [4]. Under natural conditions, it is impossible for a healthy Aquilaria tree to contain agarwood. Only external stress factors, causing a tree to activate a defense response, and the accumulation of secondary metabolic substances lead to the formation of agarwood [5]. Thus, the generation of agarwood is coincidental, and agarwood formation may take decades of processing [6]. Furthermore, over the years, wild agarwood resources have been over-harvested [7], resulting in a scarcity of natural agarwood. To meet the market demand for agarwood, Aquilaria trees have been planted artificially on a large scale in China and Southeast Asian countries. At present, there are more than five hundred million Aquilaria trees [1], and for accelerating the agarwood production in Aquilaria plantations, physical, chemical, and biological methods have been developed to induce agarwood formation [8][9]. Natural agarwood has various biological activities such as antioxidant, hypoglycemic, anti-bacterial, and anti-inflammatory [10][11], making a resource with high potential for application as a natural active ingredient. Thus far, 443 components have been identified in agarwood, of which 197 compounds have been isolated [12]. Many of them have been assayed for their biological activities, such as (6S,7S,8S)-6,7,8-trihydroxyl-2-(3-hydroxyl-4-methoxylphenylethyl)-5,6,7,8-tetrahydro-4H-chromen-4-one, 6-hydroxy-2-(2-phenylethyl)chromone, (5S,7S,9S,10S)-(+)-9-hydroxy-selina-3,11-dien-12-al acetylcholinesterase inhibitory activity [13][14][15], and 6,7-dimethoxy-2-[2-(4-methoxyphenyl)ethyl]chromone having anti-inflammatory and α-glucosidase inhibitory abilities [16][17]. The Chinese Pharmacopeia has several requirements for the quality of agarwood [18], however, currently, it does not include biological activity. Moreover, many components of agarwood have not been identified and isolated, and not all isolated components have been measured for their biological activity capacity. There have been few studies on the overall activity capacity of agarwood, and there is little literature describing the difference between the bioactivity levels of artificial and wild agarwood. Therefore, it is difficult to evaluate the bioactivity of artificial agarwood, which is an important aspect to study.

Fungal inoculation experiments were conducted on healthy, more than 4 years old and ≥5 cm in diameter A. sinensis and A. crassna trees in Beihai and Pingxiang cities, Guangxi, China, at their breast height (Table 1).
Table 1. Sample formation.
Whole plants were harvested after 6, 12, and 18 months; samples were collected and dried (Figure 1), and the obtained black resin was agarwood. The control group was black wild agarwood (YS) with a high oil content produced by A. sinensis, and it was purchased from the agarwood market in Hainan province, China.

The agarwood produced by both A. sinensis and A. crassna showed strong elimination of DPPH radicals. The clearance rate of DPPH free radicals tended to increase with increasing alcohol-soluble extract concentrations from 0.2 mg/mL to 2 mg/mL (Figure 2); thus, the scavenging rates showed some dose dependence. The IC50 values of the DPPH free radical by the artificial agarwood samples were 0.4127 mg/mL (C12), 0.5632 mg/mL (C18), 0.7487 mg/mL (A6), 0.5763 mg/mL (A12), 0.3902 mg/mL (A18), and of the wild agarwood, YS, was 0.3070 mg/mL. All batches (five) of the artificial agarwood had excellent DPPH free radical clearance rates. The IC50 value of DPPH radicals for A18 was the smallest among the sample groups, indicating that with 50% scavenging rate, its natural active ingredient was more specific and effective in clearing DPPH radicals than those of the others. 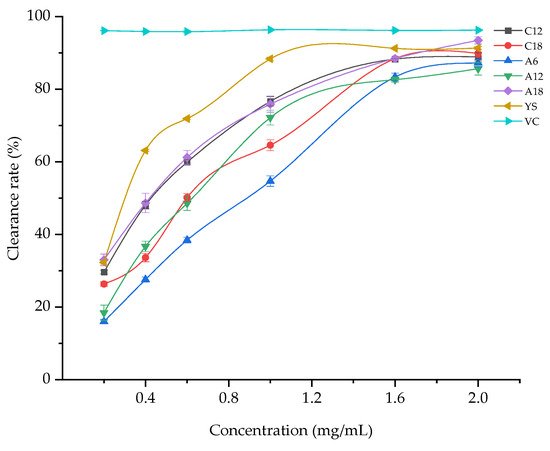 The clearance rate of ABTS+ free radicals increased with increasing mass concentration of the alcohol-soluble extract from 0.2 to 2 mg/mL (Figure 3). Moreover, the scavenging activity showed some dose dependence, with the scavenging rate initially increasing below sample concentration of 1.6 mg/mL and subsequently increasing gradually. The IC50 values of ATBS+ free radical by the artificial (five samples) and wild agarwood were 0.8401 mg/mL (C12), 0.9317 mg/mL (C18), 1.1710 mg/mL (A6), 0.8999 mg/mL (A12), 0.4472 mg/mL (A18), and 0.2368 mg/mL (YS), respectively. The IC50 value of ABTS+ free radicals for A18 was the smallest among the artificial agarwood samples, indicating that 50% scavenging rate contains a natural active ingredient that is more specific than those of the other samples. 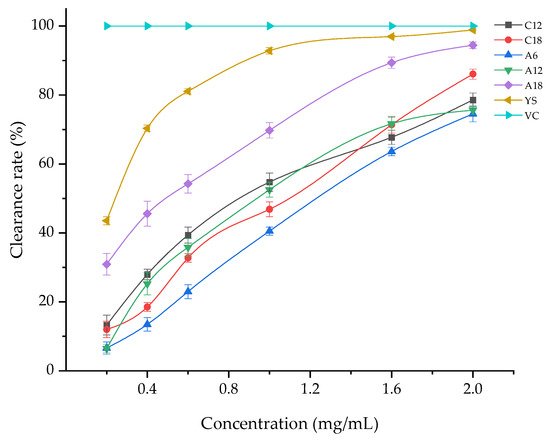