Bamboos belong to the monocotyledonous plant family Poaceae and subfamily Bambusoideae. They are globally distributed from 51° North to 47° South except in the polar regions. There are ~125 genera and 1670 species of bamboos identified so far. Compared to other grasses, flowering in bamboo is quite divergent, yet complex with respect to time to flower, number of individual culms in a population that have been induced at a time (sporadic vs. gregarious), nature of monocarpy, morphology of inflorescences (solitary spikelet vs. pseudospikelet), biology of pollen and nature of genetic compatibility. Wide diversity exists even across species and genotypes. However, due to the rarity of flowering and inaccessibility, few studies have been done to systematically analyse diverse aspects of the reproductive behaviour of bamboo.

Bamboos belong to the monocotyledonous plant family Poaceae and subfamily Bambusoideae. They are globally distributed from 51° North to 47° South except in the polar regions [1]. There are ~125 genera and 1670 species of bamboos identified so far [1][2]. Herbaceous bamboos are found in Brazil, Mexico, Paraguay and West Indies; paleotropical woody bamboos are distributed in Africa, India, Japan, Madagascar, Oceania, South China and Sri Lanka; neotropical woody bamboos are found in Argentina, Chile, Southern Mexico and West Indies; whereas north temperate woody bamboos are observed in Africa, India, Madagascar and Sri Lanka [2]. With respect to species diversity, Asia is at the top, followed by South America and Africa [3]. Among Asian countries, China contains ~6.01 million hectares of bamboo vegetation [4], followed by India having with ~160,037 sq km (India State of Forest Report 2019, https://fsi.nic.in/forest-report-2019?pgID=forest-report-2019 accessed between the period of October 2017 to February 2018). Worldwide ethnic populations are heavily dependent on bamboo bioresources, due to their various uses, such as food and beverage, fodder, medicine, fishing gear, handicrafts and artefacts [5][6][7][8].
The flowering behaviour of bamboo is distinctive. Four diverse flowering types have been identified in bamboos. They are (i) sporadic, (ii) massively synchronised (gregarious), (iii) sporadic followed by massively synchronised, and (iv) partial [9][10]. The sporadic flowering events occur in few culms of a population and have been observed in Bambusa bambos [11], Bambusa pallida [12], B. tulda [13], Dendrocalamus asper [14], and Dendrocalamus longispathus [15]. In contrast, gregarious flowering happens in a synchronised manner in almost every culm growing over a large geographical area and had been observed in many species, such as Bambusa nutans [16], B. tulda [12][17][18][19][20][21][22], Dendrocalamus racemosa [22], Melocanna baccifera [21], Thamnocalamus spathiflorus [23] and Thamnocalamus aristatus [24]. Quite often, sporadic events may be followed by mass flowering in subsequent years and are defined as sporadic-massively synchronised flowering. It has been observed in B. tulda [23], Chusquea culeou, Chusquea montana, M. baccifera, Phyllostachys heteroclada, Phyllostachys reticulata and Sasa cernua [10]. Partial flowering events take place in small, discrete populations, and it is neither extended like gregarious, nor restricted like the sporadic type concerning the number of culms flowered. It had been observed in Pleioblastus simonii [10]. The flowering time varies between 1–120 years across different species [10]. Another complexity of bamboo flowering is related to the nature of monocarpy, which differs between sporadic and gregarious flowering types. Mass death of the entire population takes place in cases of gregarious flowering, which is not common for sporadic and partial flowering.

2. Observations on Recurrent, Sporadic Flowering Cycle of B. tulda for Seven Years 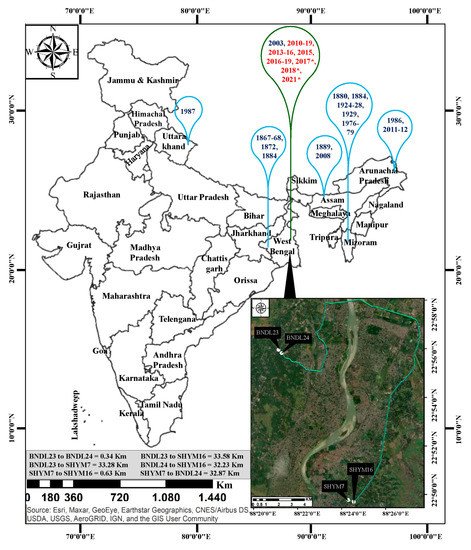 Figure 1. Gregarious and sporadic flowering incidents of B. tulda previously reported from different regions of India and the study sites used in these analyses. Data sources for Map: Esri, Maxer, GeoEye, Earthstar Geographics, CNES/Airbus DS, USDA, USGS, AeroGRID, IGN and the GIS user Community. Blue bubbles represent gregarious flowering, and green bubbles represents sporadic flowering events (Troup, 1921; Perry, 1931; Mohan Ram and Gopal, 1981; Rawat, 1987; Gupta, 1987; Naithani, 1993; Bhattacharya et al., 2006; Sarma et al., 2010; Naithani et al., 2013). Those with a flowering cycle that continued until June, 2021, have been marked with asterisks. Flowering year marked in red font identified in this study.
Table 1. Comparison between numbers of flowering vs. non-flowering clump and culm observed for seven years in four populations of B. tulda studied. Absence of flowering was indicated by (--).
All these populations were closely observed for seven years to study the flowering cycle. During the initiation of the flowering cycle in spring (February to March, Light 11 h: Dark 13 h), solitary spikelets started emerging in only a few culms of each population (Figure 2). However, by summer, i.e., from April to May (Light 13 h: Dark 11 h), the number of solitary spikelets increased and pseudospikelets started emerging. The maximum number of pseudospikelets emerged from the nodes of flowering branches during July (Figure 2). Subsequently, from August, both solitary and pseudospikelets decreased in numbers and withered by October (Figure 2). Flowering was always followed by the death of the flowered branches, but the flowering culm remained alive until 2-3 recurrent flowering cycles and subsequently underwent senescence. 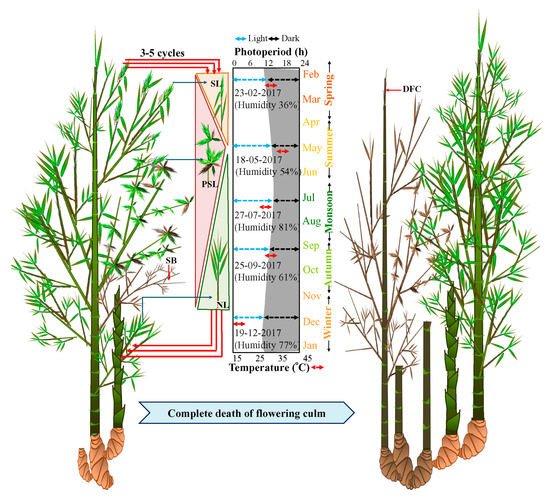 Solitary spikelets were observed either on top of the young growing branches or tillers arising from the rhizome of the flowering culm (Figure 3A–D). It was initially bright green in colour and became pale, straw-coloured on withering, 4.5–9.3 cm long, 0.5–1 cm wide. Each solitary spikelet was subtended by a flag leaf, which was smaller in size than other vegetative leaves (Figure 3A,C). They usually developed in a basipetal manner. Mature inflorescences were observed at the top, whereas young ones were located at the base and remained covered by the leaf sheath. The SEM analysis of inflorescence bud revealed a single apical inflorescence meristem (IM, Figure 3D). In contrast, pseudospikelets grew in clusters on the nodes of flowering branches and were devoid of flag leaves (Figure 3E–H). They were 4.3–9.5 cm in diameter and comprised of ~3–34 spikelet units. Here, each inflorescence unit develops on an axis (rachis), which may bear secondary axes (rachilla; Figure 3G). Rachilla bears several bracts. The basal bracts subtended multiple inflorescence buds, while the bracts in the upper region of the rachilla subtended single spikelet units (Figure 3G). The SEM analysis of inflorescence bud revealed multiple inflorescence meristems arranged in a capitate manner (Figure 3H). 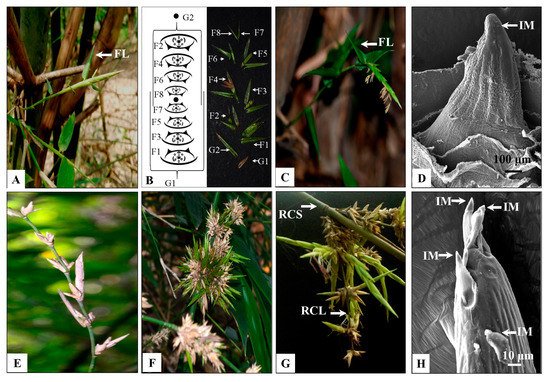 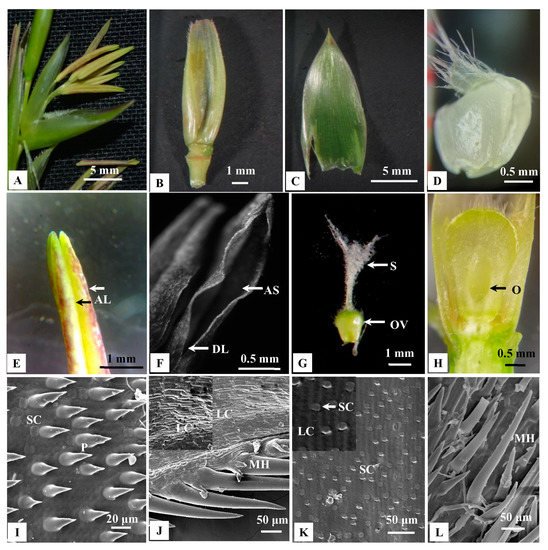 In a spikelet unit, florets matured in an acropetal manner. Florets were bisexual, 15–19 mm long and 4.5–7 mm broad at the base (Figure 4A–H). Lemmas were broadly acuminate, mucronate, concave, glabrous, many nerved, bright green, 14.5–21.5 mm long and 4.5–6.5 mm broad (Figure 4B). They were overlapping with paleas. Paleas were membranous, penicillate, 2-keeled, 5–7 nerved, 9–14 mm long, 3–5 mm broad at the base and ciliated at the top (Figure 4C). Lodicules were three in numbers, 1.5–2.5 mm long and fleshy. It was they were pale green, waxy, cuneate, oblong, hyaline at the base and whitish fimbriate at the apex (Figure 4D).
Since palea and lemma contain many species diagnostic characters, SEM analyses were performed. The abaxial surface of paleas contained dumbbell-shaped silica cells (SC, Figure 4I) and long cells (LC) with dense prickles in between (Figure 4J). In the middle part of the palea, prickles were higher in number than were SC. On the contrary, SC were dominant in margins (Figure 4K). However, the abaxial surface of the lemma was comparatively smoother. LC were observed, and prickles were lower in abundance (Figure 4K). Both lemma and palea contained trichome-like macro hairs on the margin (Figure 4L). Also, stomatal guard cells were observed in both lemma and palea.
Mature florets of B. tulda contained six stamens. Anthers were basifixed, purple or yellow at maturity (Figure 4E). Each anther had two lobes, and the tip of the anther lobes were emarginated (Figure 4E). At the apical part of an anther, a pore-like linear dehiscence suture was observed (Figure 4F). Anther filaments were thread-like and attained 10–17 mm length during anthesis. The ovary was pear-shaped, 2–2.6 mm long; style 2–3 mm long, hairy. Stigma was trifid, 2–3 mm long, having whitish stigmatic papillae (Figure 4G,H).
Studies on developing florets (F1–F9) within a spikelet revealed different rates of developmental progression between androecium and gynoecium (Figure 5A–H). Initially, androecium and gynoecium primordia grew simultaneously in the most immature floret (F1, Figure 5B). Subsequently, differentiation of androecium primordia was initiated in the floret F2 (Figure 5C), while the gynoecium differentiation started in the F3 (Figure 5D). Eventually, the mature anthers protruded ~3 h earlier than gynoecium (F6, Figure 5G). In contrast, gynoecium attained maturity after completion of anthesis and subsequent senescence of anthers (F9, Figure 5H). 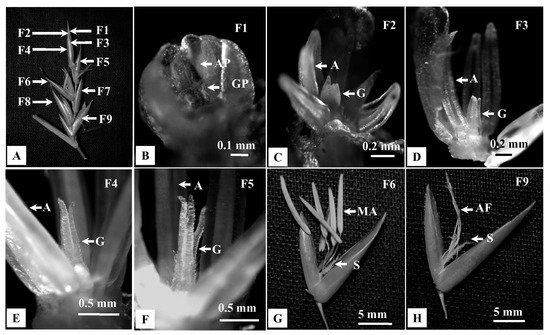 Microscopic observations revealed that pollen grains were globose, mono-ulcerate and their diameter ranged from 22.37–43.2 µm (Figure 6A). SEM analyses revealed that pollen grains were monoporate, with a distinct annulus and granular exine with regulated ridges (Figure 6A). Cytological studies revealed that the dividing microspores exhibited various meiotic stages that included metaphase I, late anaphase I, late telophase I, metaphase II, anaphase II and late telophase II (Figure S1). In many instances, microspores having multiple nuclei were observed. However, no meiotic abnormalities were recorded. To assess the viability of pollen grains, a 2,3,5 triphenyl tetrazolium chloride (TTC) assay was performed. Viable pollen grains appeared red, whereas non-viable ones remained unstained (Figure 6B). Among 2460 pollen grains obtained from B. tulda, 602 were viable, and the rate of viability varied from 23.94 ± 4.28% to 25.35 ± 1.87%. This finding was further supported by an in vitro pollen germination assay, although the absolute values were lower in in vitro germination than the TTC assay (Figure 6C–D). This could be due to a higher false positivity rate for the TTC assay. The maximum percentage (14.29 ± 0.8%) of pollen germination was observed in Brewbaker and Kwack’s medium supplemented with 15% sucrose [Table S1]. Among 396 pollen grains, 57 germinated and the germination percentage varied from 13.48 ± 4.05% to 15.16 ± 5.49% across B. tulda populations. 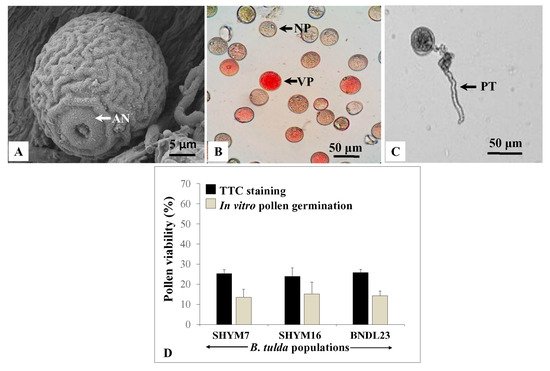