Vasopressor-Sparing and Patients with Shock

Vasopressor therapy is to restore organ perfusion so as to limit the risk of multiple organ failure and death.

Because fluid and vasopressors are the main treatments for shock, they are used on a day-to-day basis as symptomatic treatment for arterial hypotension. Vasoplegia is associated with vasodilation and vascular hypo-responsiveness, and involves multiple mechanisms [1]. Despite the emergence of new vasopressor agents, norepinephrine is still the recommended first-line agent [2]. One problem with the use of vasopressors is the risk of side effects and the ensuing need for intensive care management, which is costly.Studies have demonstrated that vasopressor use can be associated with specific side effects, and prolonged use may be associated with mortality [3][4].A study has demonstrated that implementing vasopressor sparing strategies is associated with lower morbidity and ICU (intensive care unit) length of stays [4]. Numerous reviews have investigated the different types of vasopressors and their hemodynamic effects [1][5][6][7][8], but, to date, no review has specifically focused on therapeutic and non-therapeutic strategies associated with the sparing effect for vasopressor use.Thus, we do not have meta-analyses or reviews evaluating the vasopressor-sparing strategies.

Adding a non-catecholaminergic vasopressor to norepinephrine makes is possible to lower its dosage, and the administration of a non-catecholaminergic drug is recommended for patients in refractory shock [2]. Vasopressin deficiency is part of the pathological mechanisms leading to vasoplegia in septic shock [9], and might explain the lower tolerance to vasopressin weaning compared with norepinephrine [10]. However, meta-analysis did not report any differences in mortality or length of stay [11][12]. Angiotensin-2 is likely to have similar effects, but has been less studied because it only recently received FDA (Food and Drug Administration) approval. Thus, in a context where vasopressin and norepinephrine are being administered, it seems that norepinephrine should be weaned first [10][12]. However, because of its inotropic effect, norepinephrine should be weaned depending on the myocardial contractility.
Glucocorticoids are known to restore vascular responsiveness [13], and can be used to treat corticosteroid insufficiency [14] and block the synthesis of pro-inflammatory cytokines [15]. Substitutive corticotherapy was the most described adjuvant treatment, and it was reported to consistently decrease time to shock reversal. However, the timing of this intervention was not consistent in every trial, and in the most recent surviving sepsis guidelines, glucocorticoids are only advised in refractory shock [2]. One trial specifically focused on late shock reversal demonstrated that low-dose glucocorticoids are beneficial in vasopressor weaning, mainly in patients with sepsis and a high dose of vasopressors (more than 0.20 µg/kg/min).
Cardio-selective beta-blockers were demonstrated to lower vasopressor doses in patients with sepsis and tachycardia [16]. This phenomenon was attributed to a decrease in arterial load associated with an improvement in ventriculo-arterial coupling [17]. During weaning, the rate control might improve the ventriculo-arterial coupling [18], suggesting that it could be an interesting therapeutic approach in selected patients.
During hemodynamic resuscitation, fluid therapy does not result in shorter vasopressor treatment, and could even increase vasopressor duration [19]. Thus, it is unlikely that uncontrolled administration of fluids during the optimization and weaning phases would reduce vasopressor duration. Because increasing vasopressors might increase cardiac preload [20][21], in the context of weaning, hypotension might be related to preload reduction. Because removing fluids is another cornerstone of de-resuscitation [22], we believe that preload status should be carefully evaluated in patients with hypotension attributed to vasopressor weaning.

In practice, norepinephrine weaning is implemented empirically: when the arterial pressure is consistently above the given objective, the dose of norepinephrine is decreased until discontinuation. Because vasopressors act on several pathological mechanisms involved in blood pressure (preload [20], inotropism [7], and vascular resistance [7]), arterial hypotension following a decrease in vasopressor dose can have multiple causes, and several studies demonstrated that arterial dynamic elastance (EAdyn = respiratory pulse pressure variation/respiratory stroke volume variation), which may reflect ventriculo-arterial coupling and vasomotor tone, can predict the pressure response to norepinephrine weaning [23]. An EAdyn-based algorithm decreased norepinephrine administration [4], and the automation of the weaning process by a controller responding to “fuzzy logic” made it possible to reduce the weaning time [24]. Because targeting the lower blood pressure target is associated with faster vasopressor discontinuation, it is clear that setting the right pressure target is an important decision. During acute circulatory failure, a minimal threshold for blood pressure is often set in order to ensure organ perfusion. In a recent study, setting a low blood pressure target (60 to 65 mmHg) in patients older than 65 years old with vasodilatory hypotension resulted in lower exposure to vasopressors, without a significant difference in morbidity or mortality [25]. This trial further suggested that lower blood pressure might be targeted in a selected resuscitated population, and that a lower objective might result in lower vasopressor exposure without adverse events. Nevertheless, blood pressure targets should be individualized to ensure organ perfusion [26].

Because vasopressors are associated with adverse effects [27], vasopressor-sparing strategies have emerged [28]. Vasopressor sparing strategies aim to reduce vasopressor exposure and their side effects [4]. Vasopressor administration is part of the continuum from initial resuscitation to shock reversal. As for fluid therapy, the management of vasopressors can be divided into several phases: an initial resuscitation phase with the objective of obtaining the target blood pressure to restore tissue perfusion as quickly as possible, a stabilization phase, and a weaning phase (Figure 2). When the patient is stabilized, active management, including pharmacological therapies and hemodynamic strategies, may be introduced to decrease the time to vasopressor discontinuation. Hemodynamic stability can be defined as a blood pressure variation of less than 10% without changing the vasopressor dose, and with an improvement in tissue perfusion (capillary refill time, hyperlactatemia, diuresis, and venous oxygen saturation) [4]. When blood pressure is controlled, the cardiac and vascular properties are gradually restored and the withdrawal of vasopressor drugs can be initiated (Figure 2). As the pathological process may not be symmetrical during acute circulatory failure and recovery, and as catecholamine administration leads to the down-regulation of adrenergic receptors [29], it is unlikely that vasopressor withdrawal is a parallel process to the initial resuscitation phase. 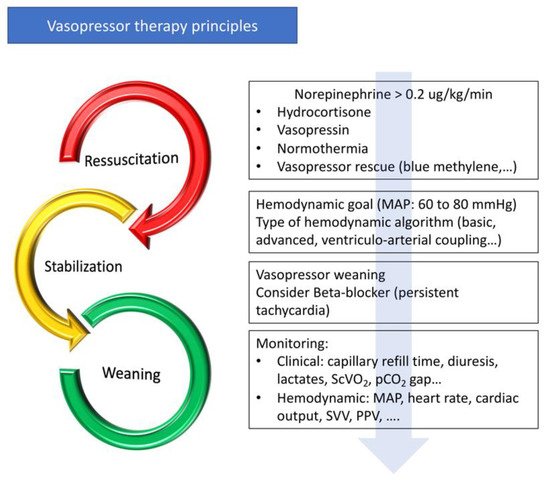 Figure 2. Principles of vasopressor treatment. MAP—mean arterial pressure; ScVO2—central venous oxygen saturation; pCO2 Gap—difference between partial pressure of CO2 in venous blood and arterial blood; SVV—stroke volume variation; PPV—pulse pressure variation.
Optimization and weaning should be part of a protocolized process (Figure 2). Firstly, a blood pressure target aiming to optimize organ perfusion should be defined by taking into account that a lower blood pressure objective may be possible. Secondly, physicians should consider the early use of intravenous hydrocortisone, non-catecholaminergic vasopressors (vasopressin and blue methylene), and maintaining normothermia. In selected patients with persistent tachycardia, beta-blocker therapy should be considered. Thirdly, when hemodynamic stability is obtained, active weaning should be initiated following a hemodynamic algorithm (see below). Because of their action on preload, inotropism, and arterial load, vasopressor withdrawal should be adapted to the patient’s haemodynamic profile, similarly to therapeutic escalation in the acute phase.
Several approaches can be followed depending on the type of monitoring (Figure 3). Basic management based on continuous measurement of blood pressure is probably the most commonly used approach. In the case of poor tolerance, the different causes listed above should be considered and eliminated in the order of the following frequency: preload, arterial load, and inotropism. A hemodynamic approach based on the analysis of ventriculo-arterial coupling and/or EAdyn may be suitable [23][30][31][32][33]. Studies have demonstrated that EAdyn and the analysis of ventriculo-arterial coupling are able to predict the effects of norepinephrine on stroke volume and blood pressure [4][34]. Arterial elastance (EA) is an index of arterial load [35] that integrates the main components of arterial load (i.e., total peripheral resistance, total net arterial compliance, characteristic impedance, and systolic and diastolic time intervals). EA can be estimated by using the equation EA = mean arterial pressure/stroke volume (mmHg/mL) [36]. Left ventricular end-systolic elastance (EV) is an indicator of cardiac function [37], and might be extrapolated by using the non-invasive single beat method described by Chen et al. [38]. Ventriculo-arterial coupling is the ratio of EA to EV, and it is an indicator of the balance between cardiac effort and arterial load. When the left ventricle and the vascular system are coupled, this ratio is around 1 [39]. Such approaches are made possible by the use of echocardiography or a continuous hemodynamic monitoring system [30][31][32][33]. In the future, physicians could consider using automation and artificial intelligence to guide the weaning process [24][40]. A recent study published in the JAMA showed that the use of this index with a therapeutic management decision algorithm reduces hypotension time [40]. 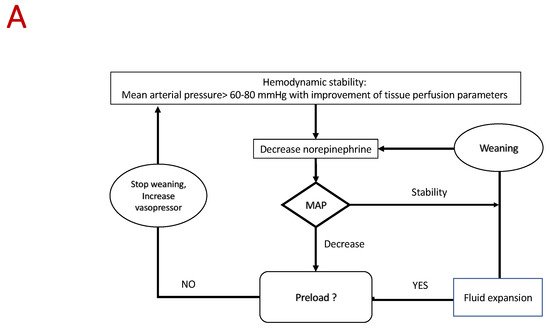 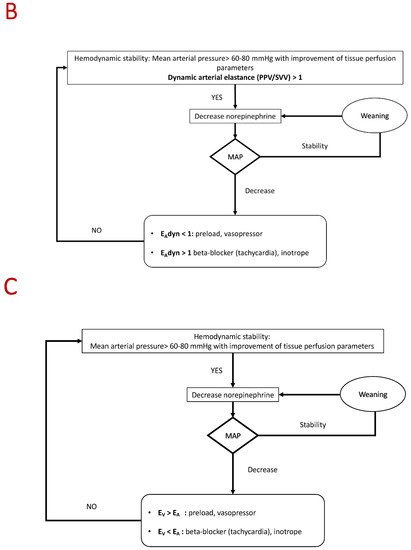 Figure 3. Algorithm proposed for vasopressor weaning. (A) Basic algorithm. (B) Advanced algorithm based on dynamic arterial elastance analysis. (C) Advanced algorithm based on ventriculo-arterial coupling analysis. EAdyn—dynamic arterial elastance; PPV—pulse pressure variation; SVV—stroke volume variation; Ev—ventricular elastance; EA—arterial elastance.
Several limitations can be discussed. We can question the clinical benefit of a vasopressor sparing strategy. There is no direct evidence that reducing pressor “stress” decreases mortality. However, studies have demonstrated that decreasing the duration of vasopressor use is associated with a decrease of ICU length of stays and morbidity [4]. Moreover, a pooled analysis of two studies suggested that increased exposure to vasopressor increased the risk of death [3]. Because vasopressor adverse effect are largely documented, sparing vasopressor and/or catecholamine is a topic of growing interest [28][41]. Most included studies were performed in sepsis (75%) or postoperative vasoplegic shock, thus limiting the extrapolation of our scoping review to these types of shock. According to the PRISMA-scr guidelines, the critical appraisal of the included sources of evidence was not mandatory. Because of the study design, the clinical benefit of the reviewed interventions was determined by the authors, and the criteria may be subjective.

There are a few published RCTs focused specifically on sparing strategies. In patients with shock, several pharmacological strategies, such as hydrocortisone, can be safely used to optimize vasopressor treatment. In addition, it appears that optimized patient management using hemodynamic guidelines could be associated with more vasopressor-free days and shorter ICU stays.