In this video, author will be talking about Predicting Premature Video Skipping and Viewer interest from EEG recording and explain our experimental setup and results.

First, he will go over the experimental design. Authors recruited 4 healthy participants and selected 45 videos for them to view during their experiment, based on their interest. After signing an informed consent form, the subjects were seated 70cm away from a ViewPixx monitor and were asked to rest their left hand on the spacebar and their right hand on the numpad. Authors applied 32 active EEG electrode in a 10-20 system to their scalp which recorded EEG through a synamps rt 64-channel amplifier. During our experiment, the participants were instructed to watch the 45 videos and press the spacebar when they wanted to skip this video, upon deciding to skip, the video ended. After each video, or when the video was skipped, they were asked wether they found the video interesting or if they had seen it before. Our experiment was designed using matlab and the Psychtoolbox 3 toolbox.

The data recorded during the experiment, authors subsequently preprocessed through rereferencing and filtered into the beta, mu and theta bands. After downsampling, authors calculated the multiscale sample entropy of each second and the power of every half second of averaged scalp EEG. Authors performed the same calculation for the EEG measured at the F3 and F4 locations on the scalp. Subsequently, authors calculated the peak occurance, range, engagement, arousal and valence indices for both the power and entropy results which author used as features to train a support vector machine, a kNN classifier and a random forest classifier. 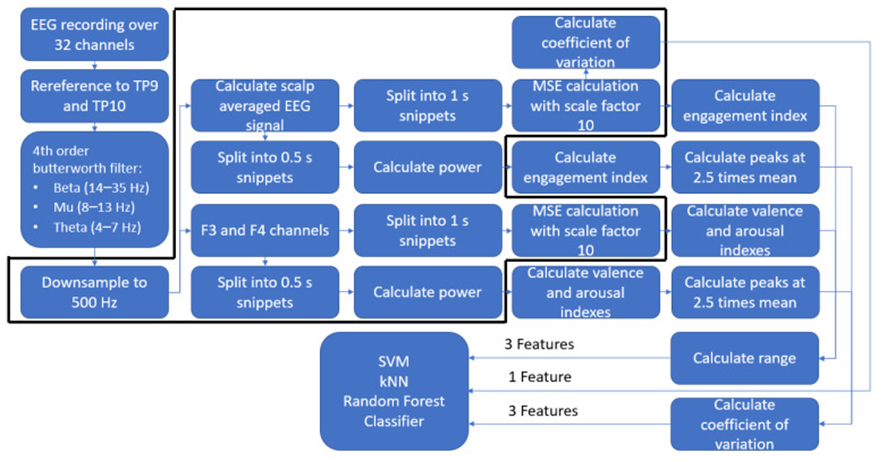 Authors used a leave-one-subject-out cross validation strategy to calculate the performance of our classifiers. When predicting skipping behavior, the support vector machine managed an average accuracy of 75.8%, the kNN reached an accuracy of 82.2% and the random forest classifier reached 80% accuracy. For the prediction of interest, the classifiers reached 73.3, 78.3 and 75.5% accuracy, respectively.

Authors then calculated which features may prove most informative for these classification tasks. Our general conclusion was that the entropy features contained, on their own, enough information to reach an acceptable result for the classifiers for both interest and skipping predictions. Only the power features dipped below 50%.

The next steps in this research is to try more features and recruit more subjects to get a better idea how to exactly process interest and predict skipping behavior. They are also interested in expanding this by possibly using emotional videos to see the alteration in the signals. Authors eventual goal is to create a BCI which can predict in real-time when a person is tired of their current activity.