Cell division of unicellular microalgae is a fascinating process of proliferation, at which whole organelles are regenerated and distributed to two new lives. We performed dynamic live cell imaging of Euglena gracilis using optical microscopy to elucidate the mechanisms involved in the regulation of the eyespot and flagellum during cell division and distribution of the organelles into the two daughter cells. Single cells of the wild type (WT) and colorless SM-ZK cells were confined in a microfluidic device, and the appearance of the eyespot (stigma) and emergent flagellum was tracked in sequential video-recorded images obtained by automatic cell tracking and focusing. We examined 12 SM-ZK and 10 WT cells and deduced that the eyespot diminished in size and disappeared at an early stage of cell division and remained undetected for 26–97 min (62 min on average, 22 min in deviation). Subsequently, two small eyespots appeared and were distributed into the two daughter cells. Additionally, the emergent flagellum gradually shortened to zero-length, and two flagella emerged from the anterior ends of the daughter cells. Our observation revealed that the eyespot and flagellum of E. gracilis are degraded once in the cell division, and the carotenoids in the eyespot are also decomposed. Subsequently, the two eyespots/flagella are regenerated for distribution into daughter cells. As a logical conclusion, the two daughter cells generated from a single cell division possess the equivalent organelles and each E. gracilis cell has eternal or non-finite life span. The two newly regenerated eyespot and flagellum grow at different rates and mature at different timings in the two daughter cells, resulting in diverse cell characteristics in E. gracilis.

Cell division is a complex and fascinating process, and prompts researchers to investigate the detailed mechanisms of the process, especially the sequential changes occurring in chromosomes during division. The chromosomes in the nucleus replicate, separate into sister chromatids via the spindle and centrosomes, which results in two new nuclei. The sequential process of nucleus replication has been intensively investigated using optical/electron microscopy and has been elucidated in several eukaryote species. Other self-replicating multiple organelles such as lysosomes, ribosomes, plastids, and mitochondria have also been reported to be equally distributed into two daughter cells during cell division.
Numerous unicellular microbes with nuclei, including yeasts and microalgae, multiply solely via cell division. Some of these microbes possess single organelles, other than the nucleus. For example, the motile microalgae Euglena gracilis has an emergent flagellum [1][2] and eyespot (or stigma) [1][3] in each cell, which constitutes single organelle. A simple but essential question arises as to how a single organelle is distributed into two daughter cells during cell division. Two simple possibilities can be conceived: one is that the single organelle is divided into two, and the other is that the original organelle is retained in one daughter cell and a new one is produced for the other daughter cell. It is essential to determine whether one of the two daughter cells receives the organelle from the parental cell as it would affect the life span of the cell. The life span of the cells may be considered “eternal” if both the daughter cells receive newly generated organelles and may be considered “finite” if one of the daughter cells contained the parental organelle and exhibits a shorter life span. The limitation of replicative life span has been reported for individual yeast cells [4], where the mother cell produces daughter cells through bud formation. In this case, only one daughter cell is generated at a time, and the process is relatively easy to track [5]. In contrast, tracking the cell division of E. gracilis is challenging. Live imaging at a high magnification is required to track organelles within the cell during cell division because the cells swim as fast as 200 μm/s or more, frequently change their shape, and exhibit euglenoid movements [1][6]. Confinement and fixation of a live cell in between two cover glasses is cumbersome as the cells escape from the observation area with euglenoid movements or are damaged severely by sandwiching pressure from the two glasses.
Non live cell imaging at a high magnification is relatively easier than dynamic live cell imaging and has been extensively carried out using electron microscopy. Walne and Arnott reported the comparative ultrastructure and possible function of eyespots in E. granulata and Chlamydomonas eugametos [7]. The authors stated that the eyespot granules develop by fusion of smaller granules. Their observations, however, provided only preliminary hints as to how the eyespot develops, to say nothing of the problem of how it replicates during cell division. Osafune and Schiff analyzed the stigma and flagellar swelling in relation to light and carotenoids using transmission electron microscopy [8]. The embedded E. gracilis cells were embedded in resin, sectioned, and stained before visualization. They observed that light is required to organize colored carotenoids into the spheres of stigma. Morel-Laurens et al. reported the effects of cell division on the stigma of Chlamydomonas reinhardtii and concluded that every daughter cell inherits a portion of the stigma of the maternal cell [9]. However, the mechanisms of stigma division/generation during cell division have not been clarified. Moreover, the mode of cell division differs considerably between C. reinhardtii [10] and E. gracilis [1].
In the present study, we performed dynamic live cell imaging of E. gracilis cell division using optical microscopy. Long-term tracking of a single moving cell was achieved by employing automatic XY-stage control, auto focusing of the microscope, and microfluidic devices for cell confinement. Cell division was recorded on video, and the appearance of the eyespot and the emergent flagellum (extended part out of the anterior of the cell body) was tracked in sequential images extracted from the video. We observed that the eyespot shrank and disappeared at the early stages of cell division. The emergent flagellum was retracted and disappeared before the start of nucleus segmentation. The eyespot remained undetected for approximately 30 min or more, and subsequently two small eyespots appeared and were distributed into two daughter cells. The flagellum was gradually protruded from the anterior portion of each daughter cell after the start of cell cleavage. Our observation revealed that the eyespot of E. gracilis is degraded/discarded once during cell division, or at least the carotenoids in the eyespot are extracted/decomposed. The two eyespots are newly reproduced for distribution to the daughter cells.
We also investigated the motility of parental and daughter cells and observed a relatively large difference (an average 18 min in 26 observed cells) in swimming initiation times among the daughter cells after cell division. The results imply that the two daughter cells develop their organelles at different rates, although they each possess each newly formed equivalent eyespot and flagellum. 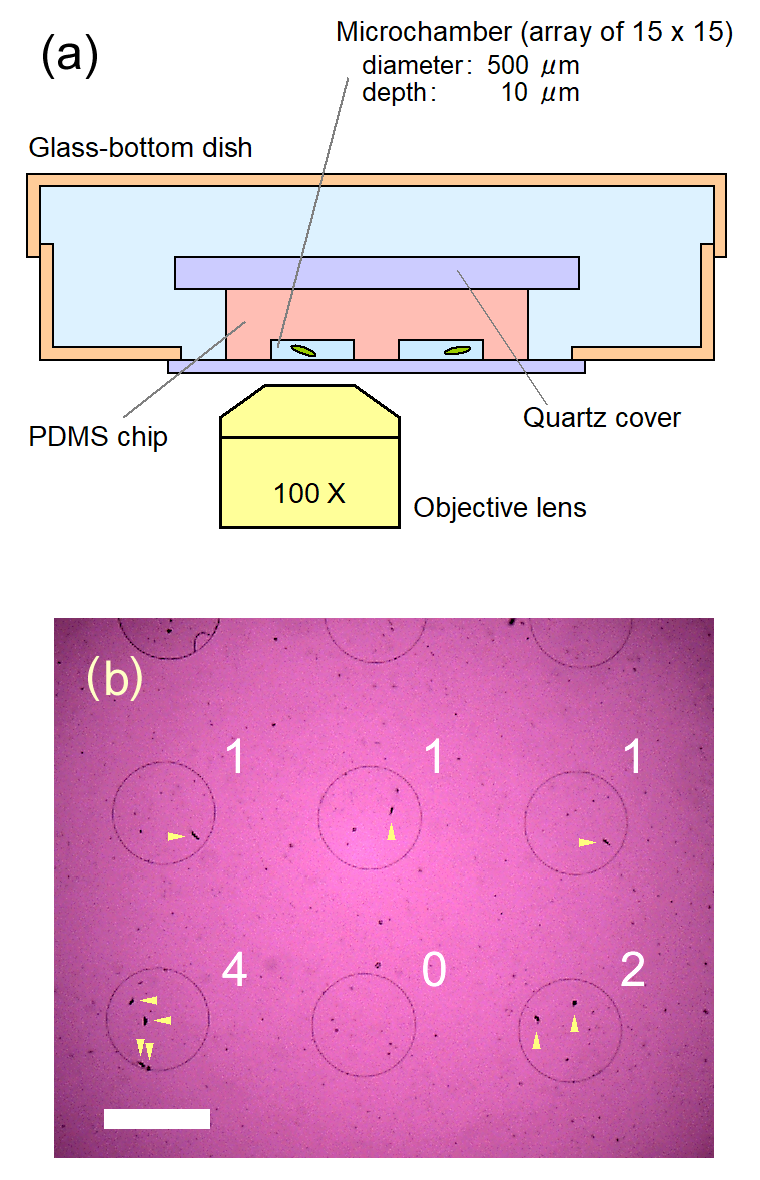 Figure 1. (a) Schematic drawing (cross-section, not in scale) of the microfluidic device used in this study. Some of microchambers held a single cell inside, by pressing down the soft porous PDMS chip onto the cell culture solution placed on the glass of the dish. The glass-bottom dish was then filled with pure water to prevent the microchambers from drying. The cells in the closed microchambers can survive three days or more. (b) A representative image of cells in confinement in our microfluidic device, observed with an objective lens of 4X. Numbers in the figure show the number of cells confined in each microchamber, and arrows indicate the cells. Scale bar, 500 μm. 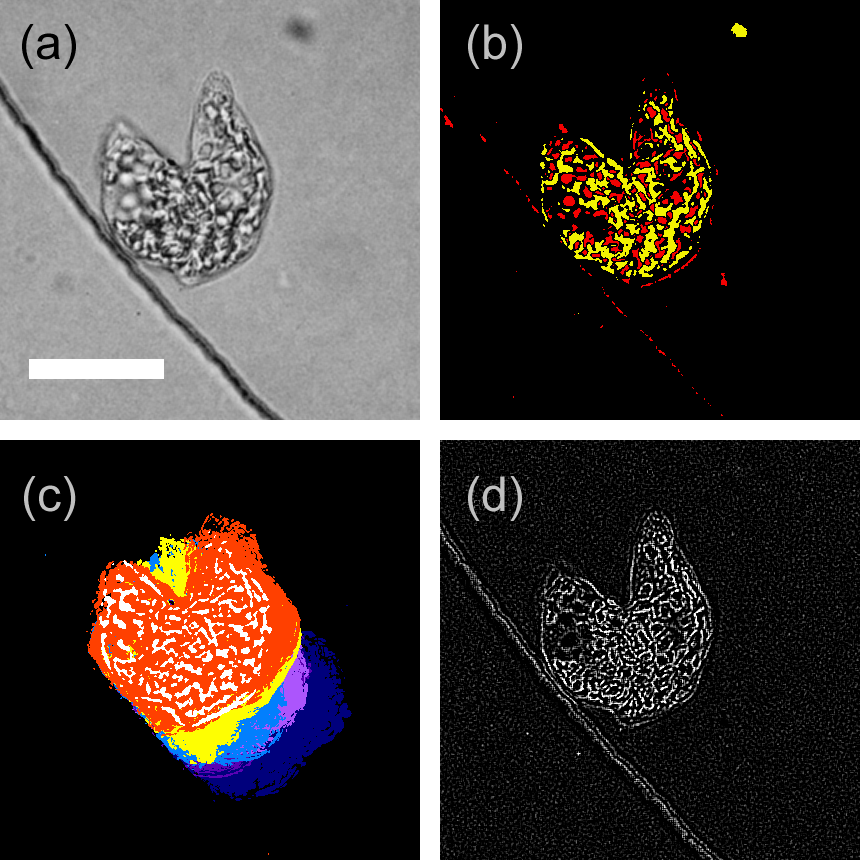 Figure 2. Examples of image processing for cell tracking, wherein a cell in the later stage of cell division at the edge line of circular microchamber was processed. (a) Captured image; obtained by 3 × 3 mean filtering with gray scaling. (b) Contrast image; obtained by thresholding brightness deviated from whole area average, i.e., the brighter part is colored in red, whereas the darker part is colored in yellow. (c) Trace image; obtained by time differential (frame-by-frame differential for each pixel) of the captured image, with further processing of binarization and integration for 20 frames (5.3 s). Five trace images were superimposed with different colors for effective visualization. (d) Focusing image; obtained by the spatial derivative for 3 × 3 pixels on the captured image. Scale bar, 20 μm. 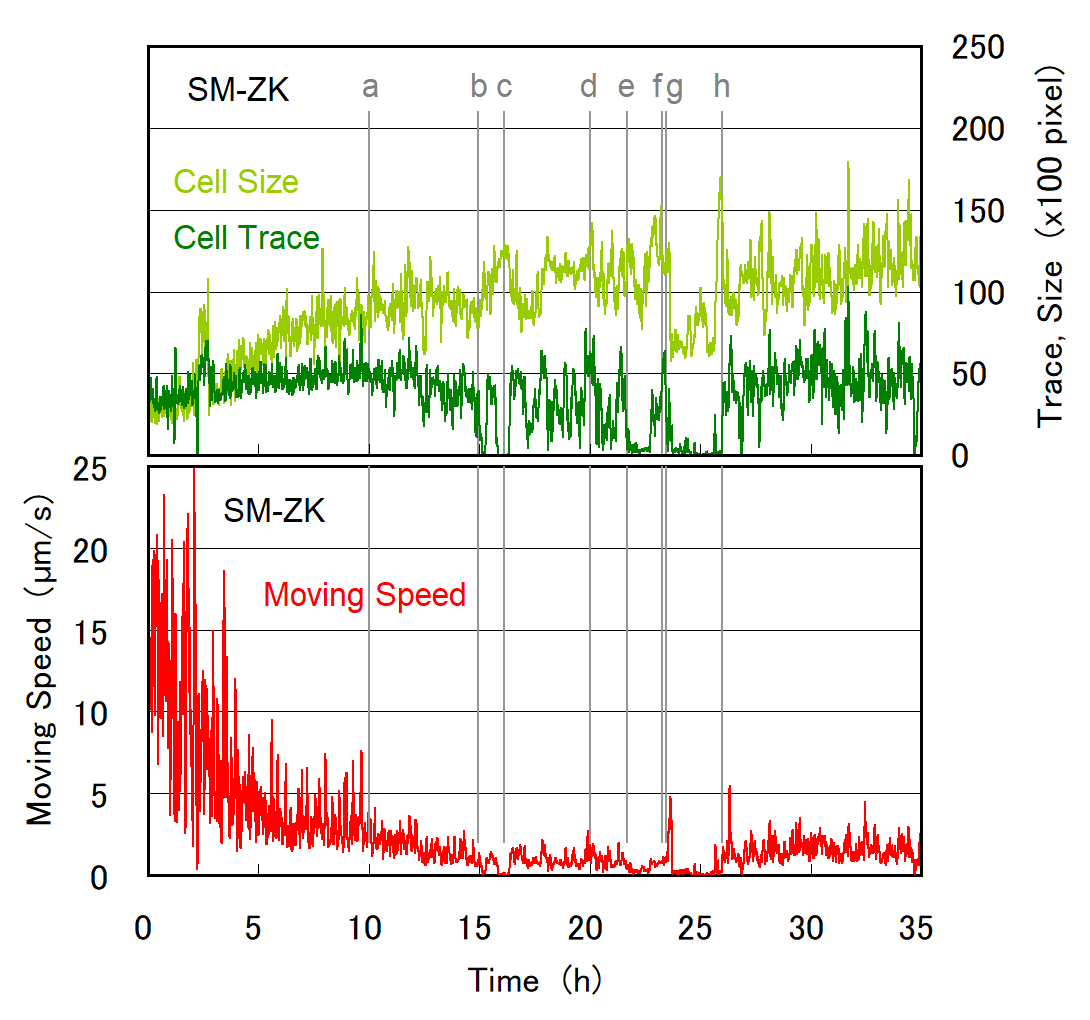 Figure 3. Temporal evolution of moving speed (velocity), cell size, and trace value obtained during the time course of cell division for an SM-ZK cell. Moving speed was calculated from XY-stage movement and the center of the gravity of the contrast image (e.g., Figure 2b). Cell size was obtained by counting red/yellow pixels in each contrast image (e.g., Figure 2b). The cell size represents the quasi-2D (10 μm thick) volume of the cell, assuming that cell height is at a uniform height of 10 μm. Trace value was obtained by estimating the non-zero pixels (white and red) in the trace image (e.g., Figure 2c). The trace value represents the momentum of cell movement and activity inside the cell. When the cell stops moving, the moving speed drops to zero, whereas the trace value may not become zero if the organelles move inside the cell. All of three values in Figure 3 were time-averaged for 2 min. The contrast and trace images for (a) to (h), and video-recorded images are given in Figure 4 and Figure 5, respectively. 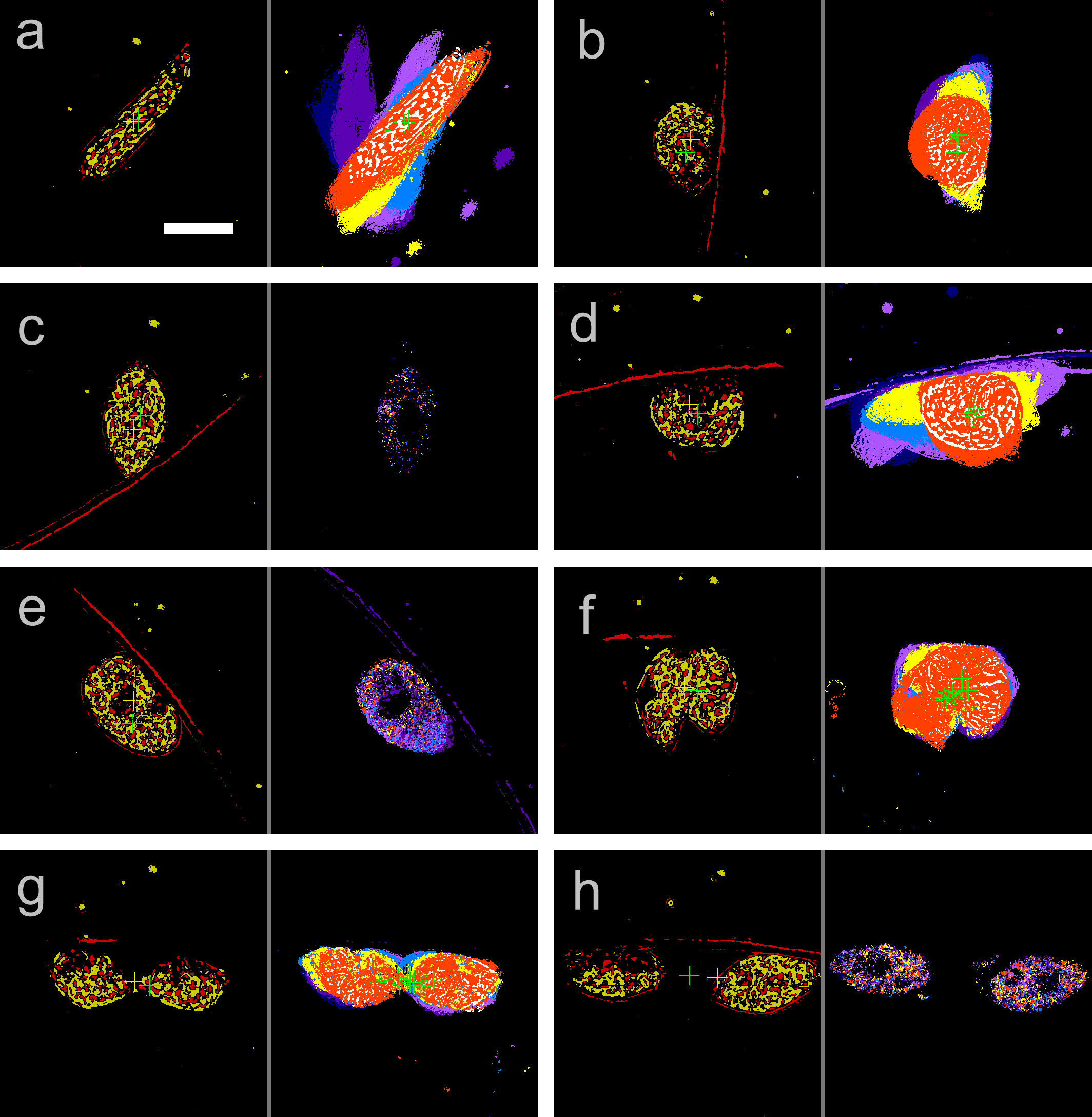 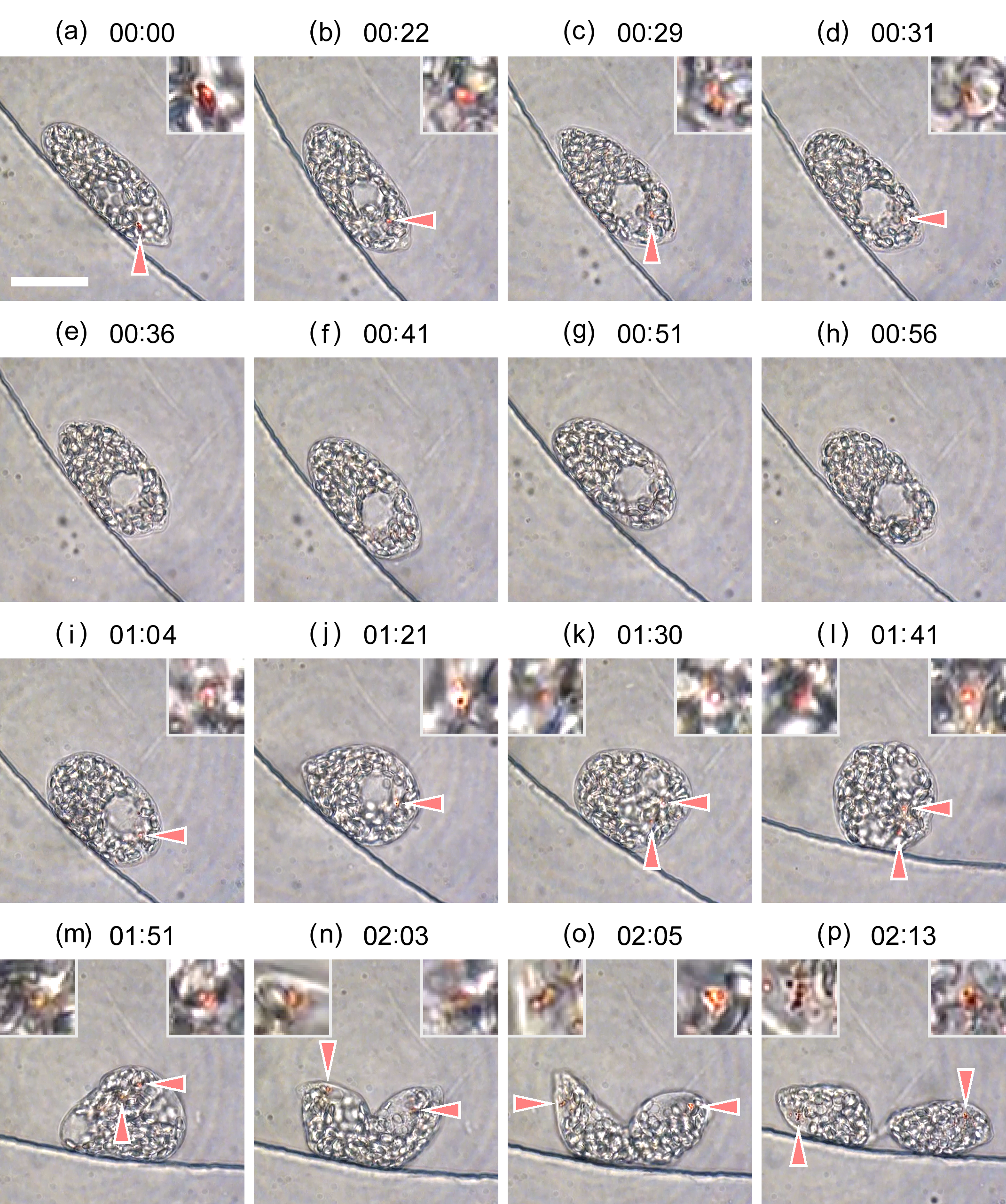 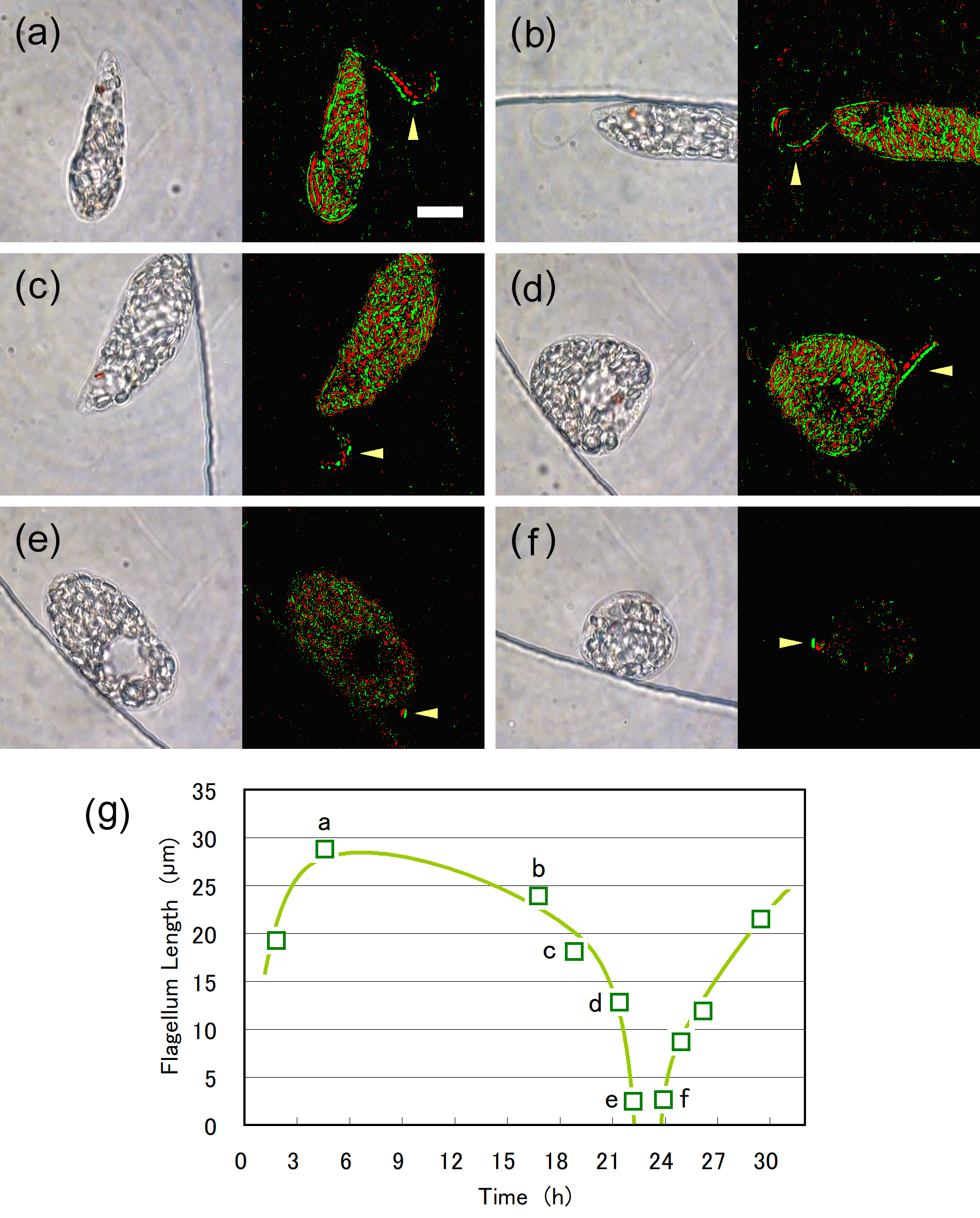 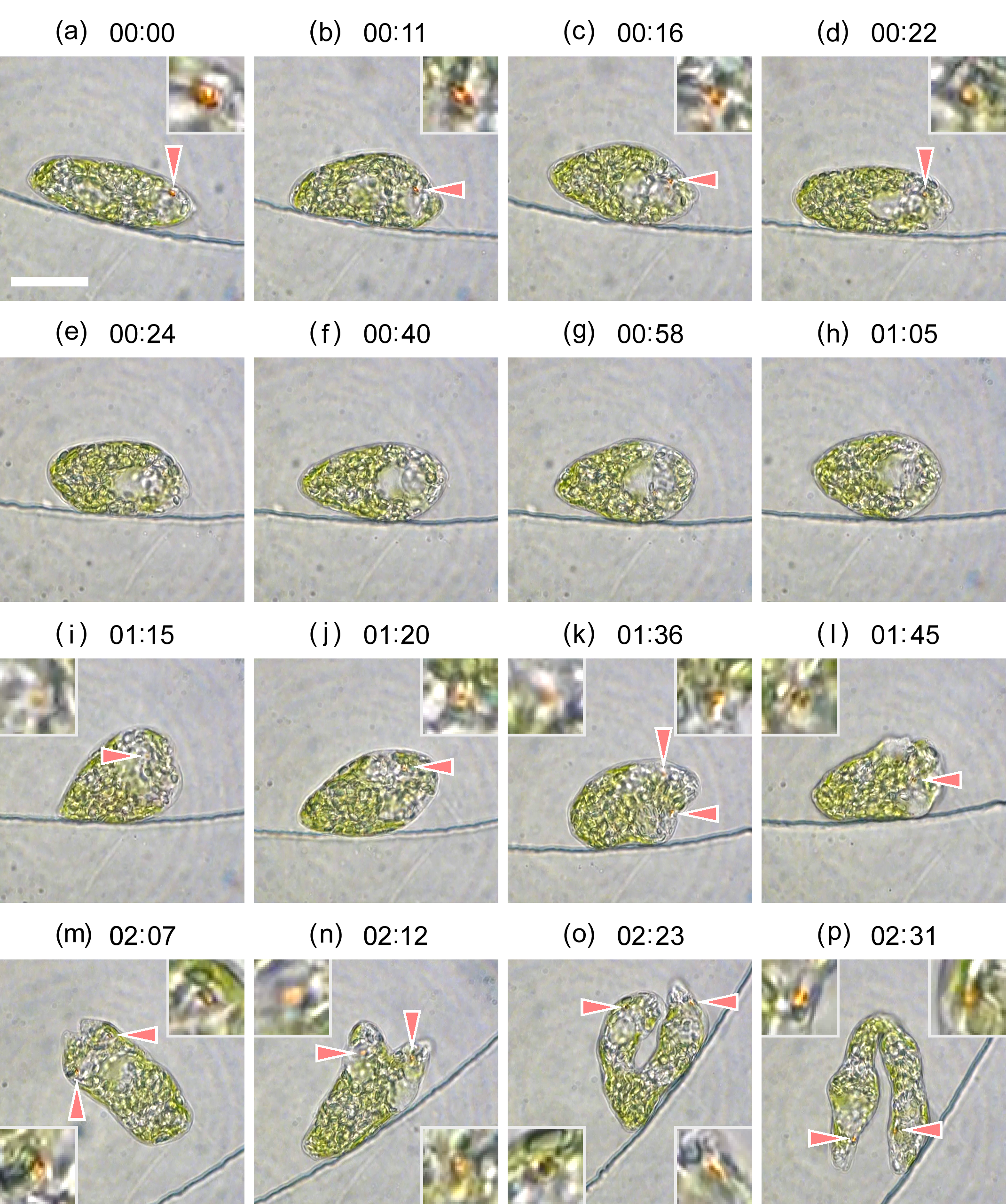 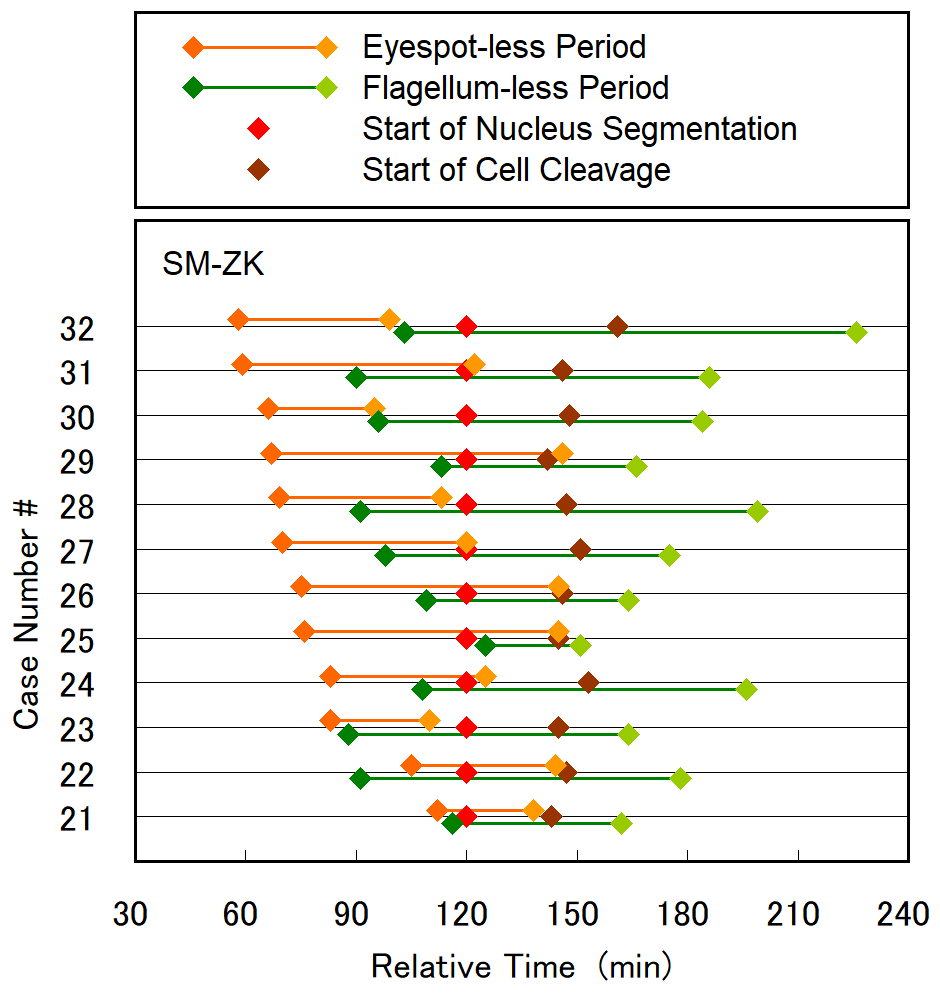 Figure 8. The period of disappearance of the eyespot and flagellum plotted for 12 SM-ZK cells, together with the initiation time of nucleus segmentation and cell cleavage. In the plot, the initiation time of nucleus segmentation was used as the standard timing (120 min). Case number was sorted by the time of eyespot disappearance (earlier to later). The case #30 corresponds to Figure 3, Figure 5 and Figure 6, and Movie S3. See Figure S5 for WT cells. 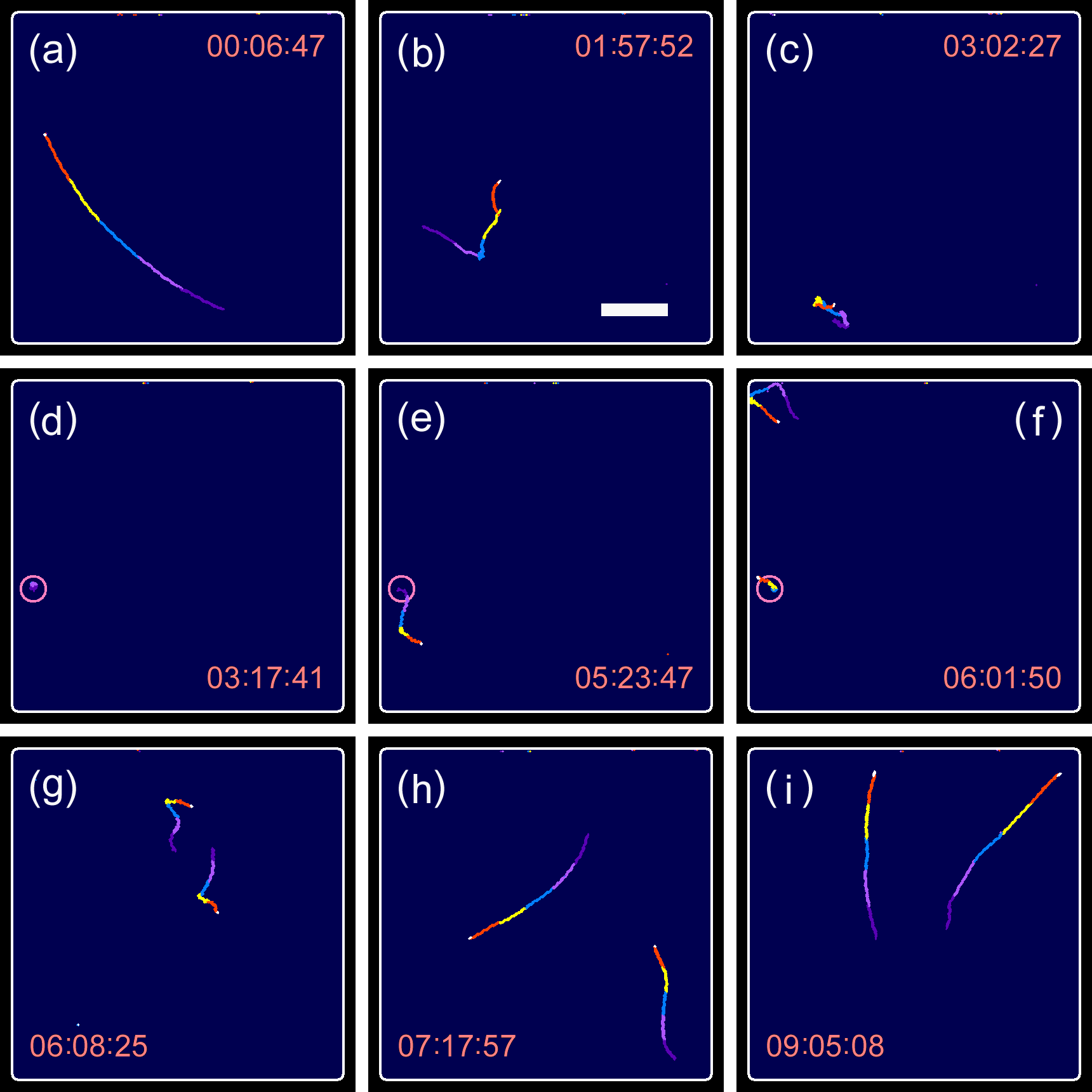 Figure 9. Swimming traces observed in a long-term millimeter-scale observation, including the period of cell division. (a–d) Movements of the parental cell, (e–i) movements of the daughter cells. In the images shown in (a–i), the traces obtained for the last 12.3 s (5 frames × 2.47 s/frame) were superimposed with different colors for visualization. Circles in (d–f) show the location where the cell division occurred. Refer to supplementary movie S6 for visualizing the entire process. Time index in the panels is indicated by hh:mm:ss. Scale bar, 500 μm. 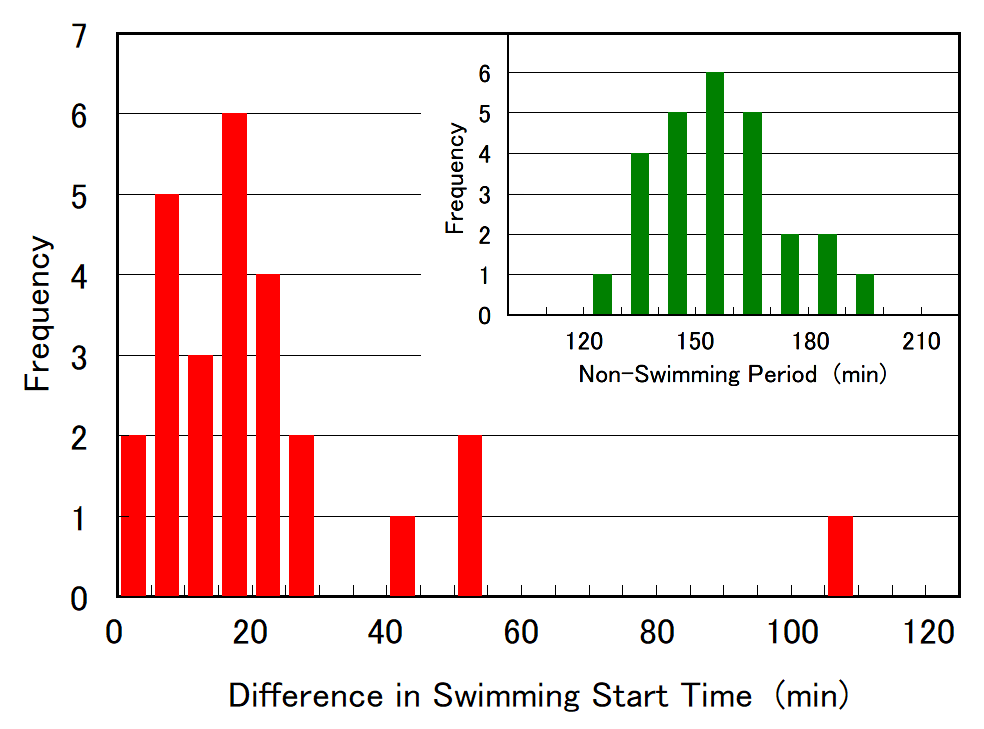 Our dynamic live cell imaging for 12 SM-ZK cells and 10 WT cells revealed the following. (1) The eyespot of E. gracilis was degraded once during cell division, or the carotenoids in the eyespot were decomposed. This process occurs predominantly 0.5–1.0 h prior to nucleus segmentation. (2) Two eyespots are gradually formed after ca. 0.5–1.5 h of its absence, and 0–0.5 h before the initiation of cell cleavage. (3) The emergent flagellum is retracted to zero-length 0–0.5 h before nucleus segmentation. (4) Two flagella gradually emerge 0.5–1.0 h after the initiation of cell cleavage (1.0–2.0 h of absence). (5) The newly regenerated eyespot and flagellum may grow and mature at different rates in the two daughter cells. Based on our microscopic observations, it is reasonable to assume that the two daughter cells are identical in terms of organelle age. These results also do not refute the hypothesis that the life span of E. gracilis may be “logically eternal,” although further studies are required to confirm it. The dynamic live cell imaging technique demonstrated in this study is an efficient approach to investigate organelle regeneration in unicellular microbes, especially on genetically modified strains of E. gracilis and other microalgae. 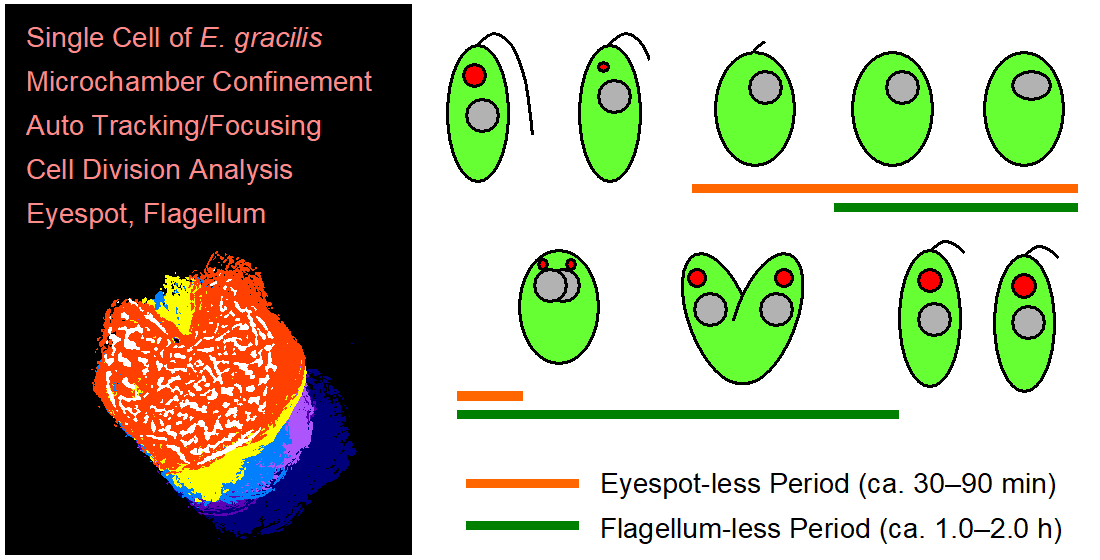