CA mortar (sometimes abbreviated to CAM) is one of the major construction materials for slab ballastless track in high-speed railways; it is an intermediate layer flung within the space between the track slab and the trackbed (as depicted in) of CRTS I and CRTS II. Cement and asphalt mortar is an organic–inorganic composite material primarily composed of asphalt emulsion, cement, sand, water, and other chemical admixtures. This composite material possesses fascinating properties that are different from both concrete and asphalt material alone because it couples the strength of cement as well as the flexibility of asphalt material.

With the design of high-speed rail, there has been an increasing demand for a high-quality railway system that includes railway tracks, communication, and a signal system, etc. Non-ballasted slab track is one of the foremost vital innovations created for high-speed railways. It is adopted all over the world due to the advantages it offers to the system over the ordinary ballasted track that includes reduced structural height, fewer maintenance requirements, durability, high lateral track resistance, which gives room for future speed increments, and no churning up of the ballast [1][2][3][4][5]. In mainland China, the China Railway Track System (CRTS), categorized into CRTS I, CRTS II, and CRTS III, are the main types of ballastless track systems adopted in recent decades.

CA mortar (sometimes abbreviated to CAM) is one of the major construction materials for slab ballastless track in high-speed railways; it is an intermediate layer flung within the space between the track slab and the trackbed (as depicted inFigure 1) of CRTS I and CRTS II Cement and asphalt mortar is an organic–inorganic composite material primarily composed of asphalt emulsion, cement, sand, water, and other chemical admixtures [1][3][6]. This composite material possesses fascinating properties that are different from both concrete and asphalt material alone because it couples the strength of cement as well as the flexibility of asphalt material [7]. CA mortar is produced by mixing its components using different mix proportions; its properties are mainly controlled by the proportion of asphalt to cement (A/C ratio), which is the ratio of the content of asphalt to the content of cement by mass or by volume; sometimes expressed as the ratio of asphalt emulsion to cement (AE/C). 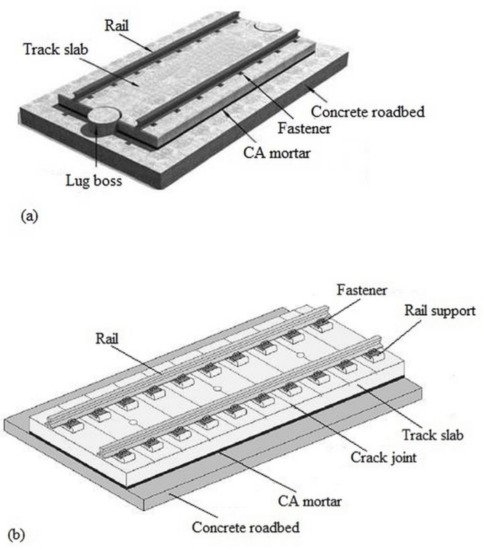 CAM I is mainly characterized by having high asphalt content, less cement, and a higher A/C ratio ranging between 0.6 to 1.2; contrarily, CAM II has a high cement content with less asphalt content and an A/C of about 0.2 to 0.6 [1]. Moreover, with the properties of asphalt being more influenced by temperature as compared to cement, the dynamic mechanical response of CA mortar under varied service temperatures may differ [10]. For instance, more asphalt (higher A/C) is required in CAM I when the railway structure requires more damping performance; whereas more cement (lower A/C) is included in CAM II if the railway structure needs more strength compared to the damping performance [11].

The interaction between the constituent materials of CA mortar influences its properties; the interactions between components of CA mortar include the impact of cement on the breakdown of emulsified asphalt and the effect of emulsified asphalt on the hydration process of cement [12][13]. Therefore, CA mortar does not combine only the advantages of cement and emulsified asphalt materials but also improves the shortcomings of the two materials. Properties of CA mortar such as the damping performance and strength characteristics are greatly affected by the amount of asphalt emulsion and cement. The damping performance and strength characteristics of CA mortar are determined by various parameters by engineers during design, which includes the type of railway track structure, load, environmental conditions, etc.

Currently, the incorporation of industrial by-products, naturally occurring minerals, and other supplementary cementitious materials (SCM) as a partial replacement of cement in the production of CA mortar has also been getting attention from researchers across the globe. [14] proposed a technique that assesses the plausibility of stabilizing the ballast using CA mortar, as an eminent solution to minimize losing the track quality as a result of particle abasement and ballast settlement. Based on the technique they proposed, pouring fresh CA mortar on the ballast layer will cause the CA mortar mixture to flow through the ballast system, thereby coating the ballast particles and creating strong inter-particle bonding [15]. Although the properties of asphalt material are delicate to climatic conditions such as moisture and temperature, in this technique, the incorporation of cement will mitigate this problem.

CA mortar is prepared using an appropriate mix proportion of constituent materials and depending on the type of CA mortar and where it will be used or applied, the proportion of materials varies. These proportions include the percentage by mass or volume of each of the constituent materials, as well as the various ratios such as A/C, ratios of sand to cement (S/C), water to cement According to the chosen mix proportions, the materials are then mixed using the designated method and apparatus. Consequently, in the construction of a non-ballasted plate track, CA mortar is grouted within the space between the bottom concrete trackbed and the top track slab with its gravitational force; thus, it needs to possess good properties to alter to such a technique [3][16][17], and to enhance the stability and comfort degree of the ballastless slab track structure [18].

When cement and asphalt emulsion form a mixture, cement hydration and the demulsification of emulsified asphalt begin to take place; the asphalt droplets usually form asphalt film after demulsification and cement grains are hydrated out–in, which consumes the water and increases the solid contents [3]. The structural development of CA mortar is associated with the change of state of the mixture of cement and asphalt emulsion from flow paste to a solid or hardened mortar. This mixture changes from flow or liquid state to plastic state and then to the solid-state; this process can be divided into four major phases or states: the dispersion state, the phase of interaction between emulsified asphalt with cement, the asphalt film structural formation phase, and structural development of solid mortar [3].

When asphalt emulsion and cement are mixed, they interact with each other in such a way that the consumption of water due to the hydration of cement accelerates the breakdown of emulsified asphalt; likewise, the adsorption of asphalt droplets on the surface of cement grains slows down the cement hydration process [1][20][21]. Ca(OH)₂ from the hydration of cement neutralizes the acid in emulsified asphalt, as such, hydration product begins to form when the Ca(OH)₂ concentration is saturated. At the same time, an asphalt emulsion is absorbed onto the cement grains and cement hydration products [3]. The interaction among cement and emulsified asphalt are usually represented experimentally by two aspects: the acceleration of asphalt emulsion breakdown due to the process of hydration of cement, and the retarding effect on cement hydration caused by the adsorption of asphalt droplets on the surface of cement grains [1], as illustrated in Figure 3.

Once in contact with water, Portland cement begins to hydrate, set, and then hardens due to the number of chemical reactions among different chemical substances and water [24]. Emulsified asphalt, on the other hand, is formed by the process of dispersing small beads of asphalt or bitumen in water. Emulsified asphalt can be solidified or demulsified by flocculation and coalescence of asphalt droplets [1][25], as illustrated in Figure 4.

Figure 4. Stages in the breakdown or demulsification of asphalt emulsion [26].

The results of their study indicated that emulsified asphalt slows down early cement hydration, and the asphalt membrane negatively influenced further hydration of cement. They reported that for CAM-II, which possesses a lower A/C and a high elastic modulus, hardened cement paste is the essential structural skeleton that influences strength development. While for CAM-I, which has a higher A/C and low elastic modulus, the framework formed by the asphalt film membrane and the framework formed by hardened cement paste are responsible for the strength development [28]. Their study clearly shows that the A/C ratio plays a vital role in determining the properties of CA mortar, but no detailed explanation was found in their study as to the effect or contribution of using different types or classes of emulsified asphalt on the strength development of fresh and hardened CA mortar.

When cement and emulsified asphalt are mixed, cement consumes water, and cement hydrates such as calcium silicate hydrate (C-S-H), calcium hydroxide (CH), and ettringite are produced. Furthermore, at the end of the cement hydration, the porous C-S-H gel takes up a large volume of hardened cement paste and forms a compound microstructure [1]. With regards to asphalt binder, being an organic material, asphalt binder has a complex microstructure which is decided by its chemical components; asphalt binder is generally regarded as having a colloidal system, and therefore, at a macroscale level it can be regarded as one continuous phase [1][29][30]. 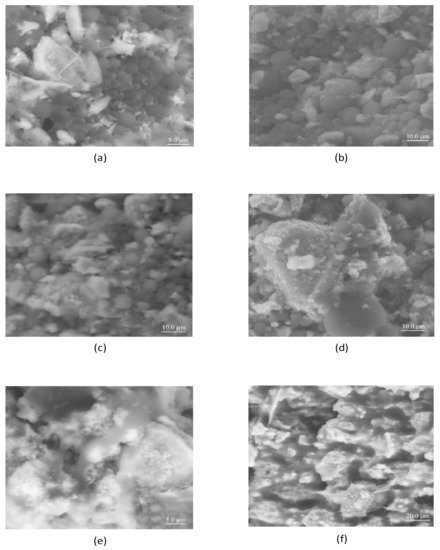 The interaction between cement and emulsified asphalt ensures that after the process of cement hydration, cement hydrates provide strength to the CA mortar while emulsified asphalt provides toughness to the CA mortar after demulsification. , it was reported that the increase in the A/C improves the ability of CA mortar to resist deformation and also enhances its plasticity; increasing the A/C brings about an increase in the amount of asphalt, which significantly increases the amount of asphalt film that wraps the surface of cement hydrates; this consequently improves the damping ability of CA mortar. Therefore, the incorporation of rubber powder into the CA mortar can enhance its damping ability for good energy absorption and vibration dissipation. Similar conclusions have been made in the related literature [32], where it was documented that the incorporation of rubber powder or fiber can ameliorate the damping ability of cement mortar; nevertheless, the incorporation of fiber was found to be more efficient than RP in enhancing the damping ratio of cement mortar [32].

The hydration of cement affects the chemical stability of emulsified asphalt in different ways; the loss of water to cement hydration causes the spaces between the asphalt particles within the emulsion to collapse, and this increases the chances of the coalescence of asphalt micelles. [33] studied the effect of pH value, Ca2⁺ concentration, and water loss due to hydration of cement on the chemical stability of asphalt emulsion. [21], the adsorption manners among emulsified asphalt and cement in CA mortar were studied, and it was reported that cement hydration speed up the demulsification of asphalt emulsion, which in return accelerated the adsorption of asphalt droplets onto the surface of cement grains, thus, increasing the particle size in the cement–asphalt emulsion (CAE) system. They used the filtration method to study the adsorption property of asphalt particles to the surface of cement grains, while the influence of adsorption behavior of asphalt droplets in the emulsion on the particle size of the CAE system was evaluated using a laser particle size analyzer.

When introduced or incorporated into cement mortar, emulsified asphalt generally has a negative influence on its strength and modulus of elasticity but improves its deforming ability [7][28][36][37]. Studies show that CA mortar with a higher A/C is associated with low strength and higher damping ability, while CA mortar with a lower A/C is associated with a higher strength but low damping ability. This is related to the increase in cement content and cement hydrates that is associated with a decrease in the A/C; cement possesses a higher elastic modulus than asphalt, so increasing cement content causes an increase in the elastic modulus of CA mortar; this is in line with some other results found in the related literature [37]. Therefore, increasing sand content leads to an increase in the elastic modulus of the CA mortar [38].