Nuts are indehiscent dry fruits with one seed and a thick, hard pericarp. The presence of nuts in diets has notably increased due to their composition, and the presence of antioxidants and their unsaturated fatty acid profile has led to a considerable increase in their consumption. The volatile profile of nuts is important from different points of view. It affects consumer’s selection, influences raw material selection for the production of composite foods, dictates variety selection in breeding programs, and, from a quality perspective, its changes can indicate food degradation or alteration.

Food odor and aroma have a great influence on consumers’ preference. These attributes are related to different volatile chemicals. Volatiles are a set of compounds with a relatively low molecular weight and high vapor pressure [1]. They include different classes of chemicals such as alcohols, hydrocarbons, esters, terpenes and aldehydes. The characterization of this complex and heterogeneous mix is important in food quality control and consequently, for the food industry [2].
Molecules with low molecular weight are perceived in the nose and mouth sensors faster than others with higher molecular weight and, for this reason, they condition the final flavor of the product. These predominant compounds are known as odorants, and they are very important as some of them are associated with pleasant odors, and others with off-odors. Study of the chemical composition of the volatile profile of foods allows us to understand the optimal conditions for food production and contributes to obtaining valuable information about their composition. Odor molecules arrive into the nose by air, and they are perceived by the olfactory mucosa via orthonasal smell. Meanwhile, aromas are perceived in the nose by the olfactory receptors, in the olfactory epithelium via the retronasal pathway, when the food is put into the mouth and the cells are broken by chewing, thus releasing volatile compounds. Odor and aroma perception is the result of the activation of odorant receptors generating complex signals that are sent to the central nervous system [3]. The amount and type of volatiles released from the food highly depends on the nature of the sample matrix and the state of the food [4]. More specifically, the entire volatile profile reflects the phenotypic or metabolic state of foods. In plants, volatile compounds have diverse and important functions such as to attract pollinators to flower organs, to protect damage plants from the attack of herbivores and to exchange some low molecular weight terpenes during light changes, droughts, or other stress situations for the plant [4].
Nuts are indehiscent dry fruits with one seed and a thick, hard pericarp. In the botanical sense, they are produced by some families of the order Fagales [5]. These families are the Juglandaceae (walnut and pecan nut), the Fagaceae (chestnut), and the Betulaceae (hazelnut). In the culinary sense, the term nut is applied to a wide variety of dried seeds and fruits and to any large, oily kernel found within a shell. These nuts belong to the Fabaceae (peanut), the Rosaceae (almond) and the Anacardiaceae (pistachio) families. From the food composition point of view, nuts are characterized by having a low water content, i.e., usually less than 50% weight, although some exceptions exist [6]. Due to the group’s diversity, nut volatile profiles are expected to be diverse.
Based on data recorded by the Food and Agriculture Organization of the United Nations (FAOSTAT), worldwide nut production has increased significantly in recent years, from 12.9 Mtons in 2010 up to 17.5 Mtons in 2019 (Figure 1) [7]. In 2019, California was the top worldwide producer of nuts, with an estimated annual production of 27.0% of the total. The United States was the second largest producer at around 17.4%, followed by Turkey (7.5%), Iran (4.9%), Côte d’Ivoire (4.6%), India (4.3%) and Spain (3.3%). 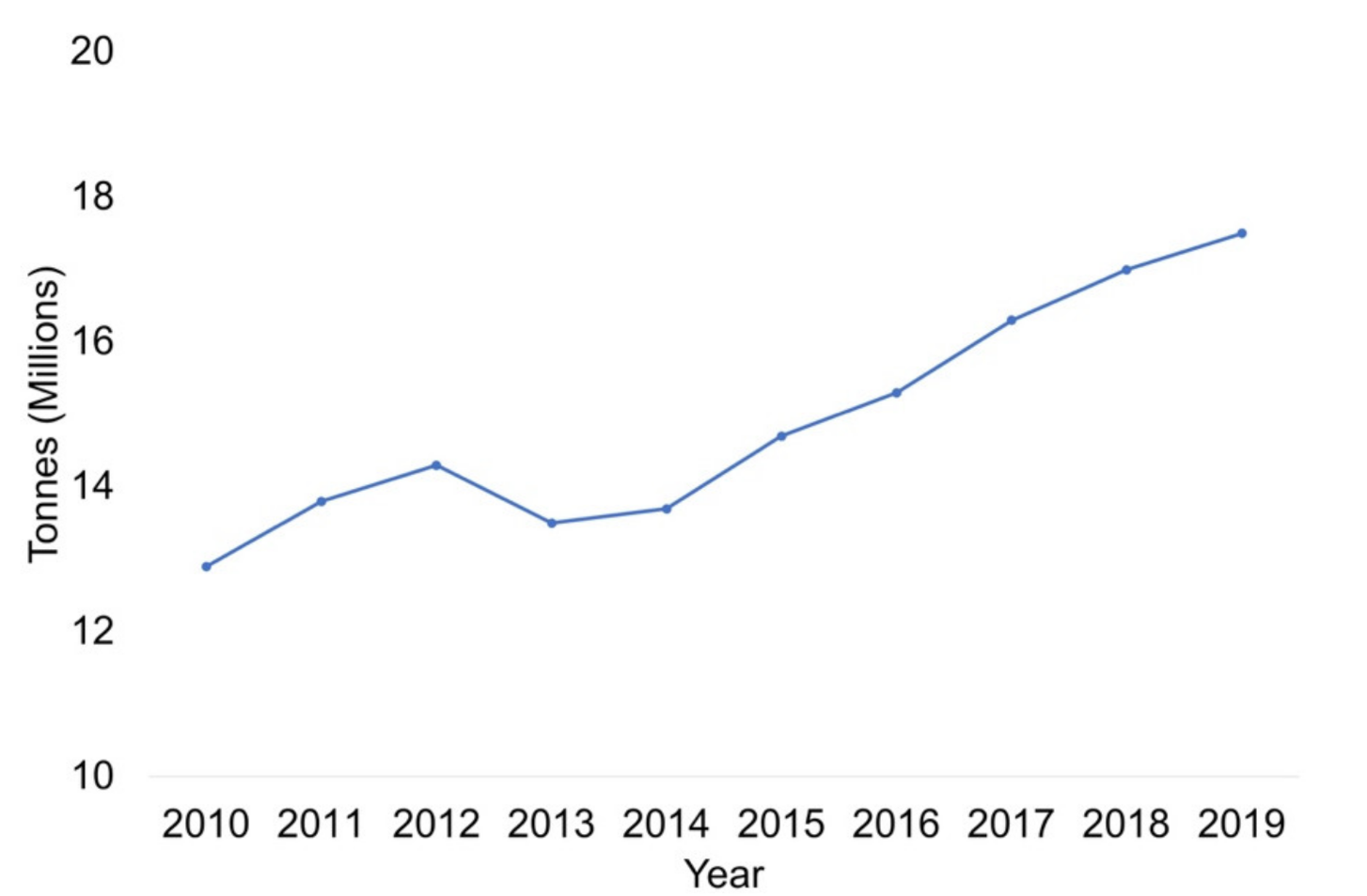 Figure 1. Worldwide nut production from 2010 to 2019.
The majority of worldwide nut production in 2019 was registered as walnuts, followed by almonds, cashew, chestnut, hazelnuts, and finally, pistachio and Brazil nuts (Figure 2) [7]. Nuts are seeds showing a high sensory appeal and numerous health benefits due to their composition. In this sense, they present a high content in terms of protein (13–26% total weight) and lipids (43–76% total weight), carbohydrates (9–30% total weight) and fiber (7–12% total weight) with less than 6.4% water [6]. Nuts can be eaten raw, roasted, or salted as snacks. Thus, they are widely added to some important food formulations such as ice creams, chocolates, confectioneries, cookies, cereal bars and cakes. Due to their high level of dry matter and the possibility of undergoing technological processing, the volatile profile of nuts can undergo significant modifications compared to the profile of raw products. 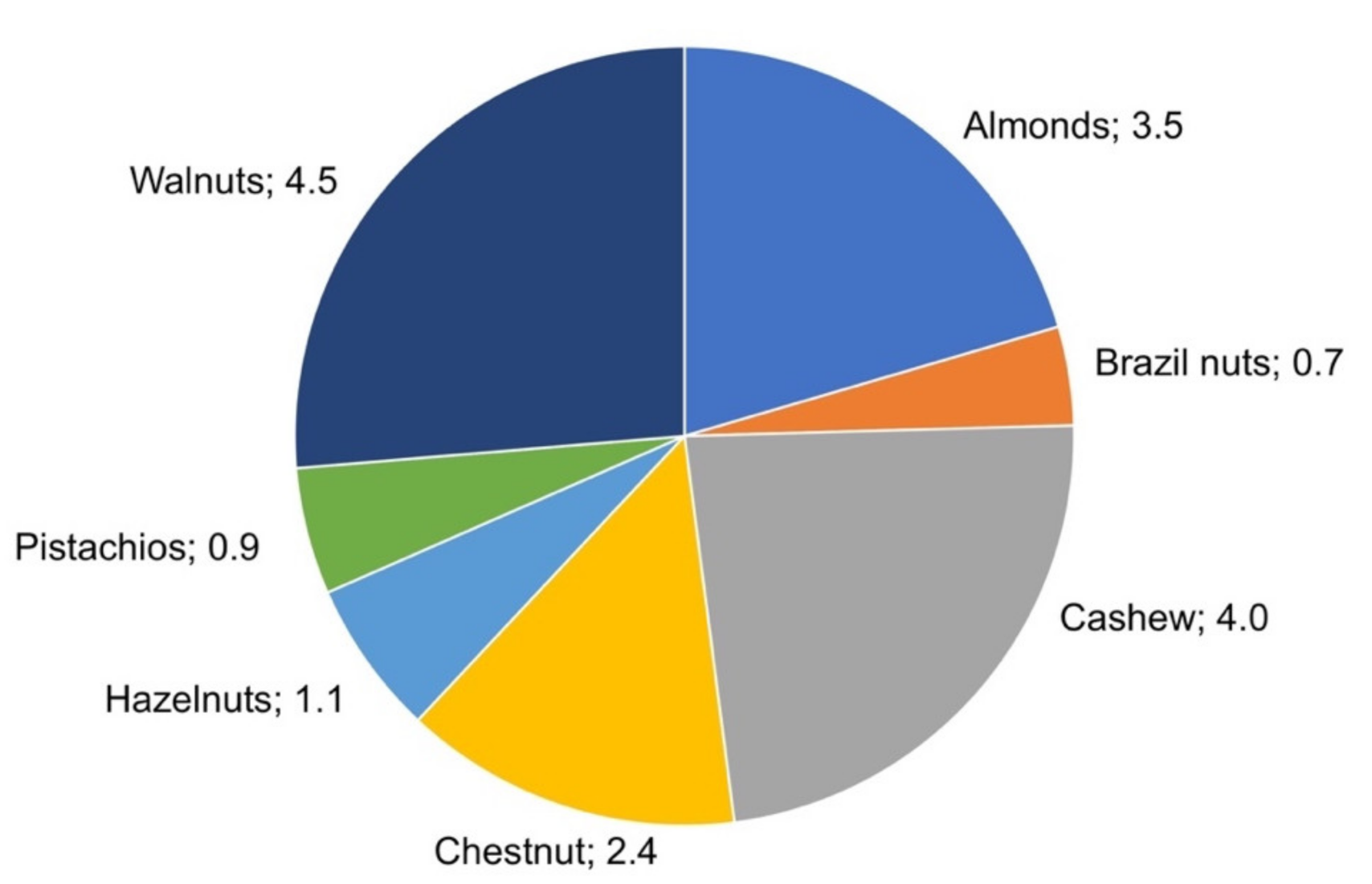 The final flavor of nuts is conditioned by the volatile compounds generated during fruit growth and maturation. Further changes in the volatile profile can occur during the storage after the harvesting of fruits and in the processing and cooking of nuts, thus affecting their sensorial quality [8]. The precursors of the VOCs are mainly fatty acids, carbohydrates and amino acids present in the plants and fruits (Figure 3). Among the VOCs in nuts, it is possible to find saturated and unsaturated molecules with straight, branched or cyclic structures including different functional groups such as alcohols, aldehydes, ketones, esters and ethers and also nitrogen and sulfur [9]. 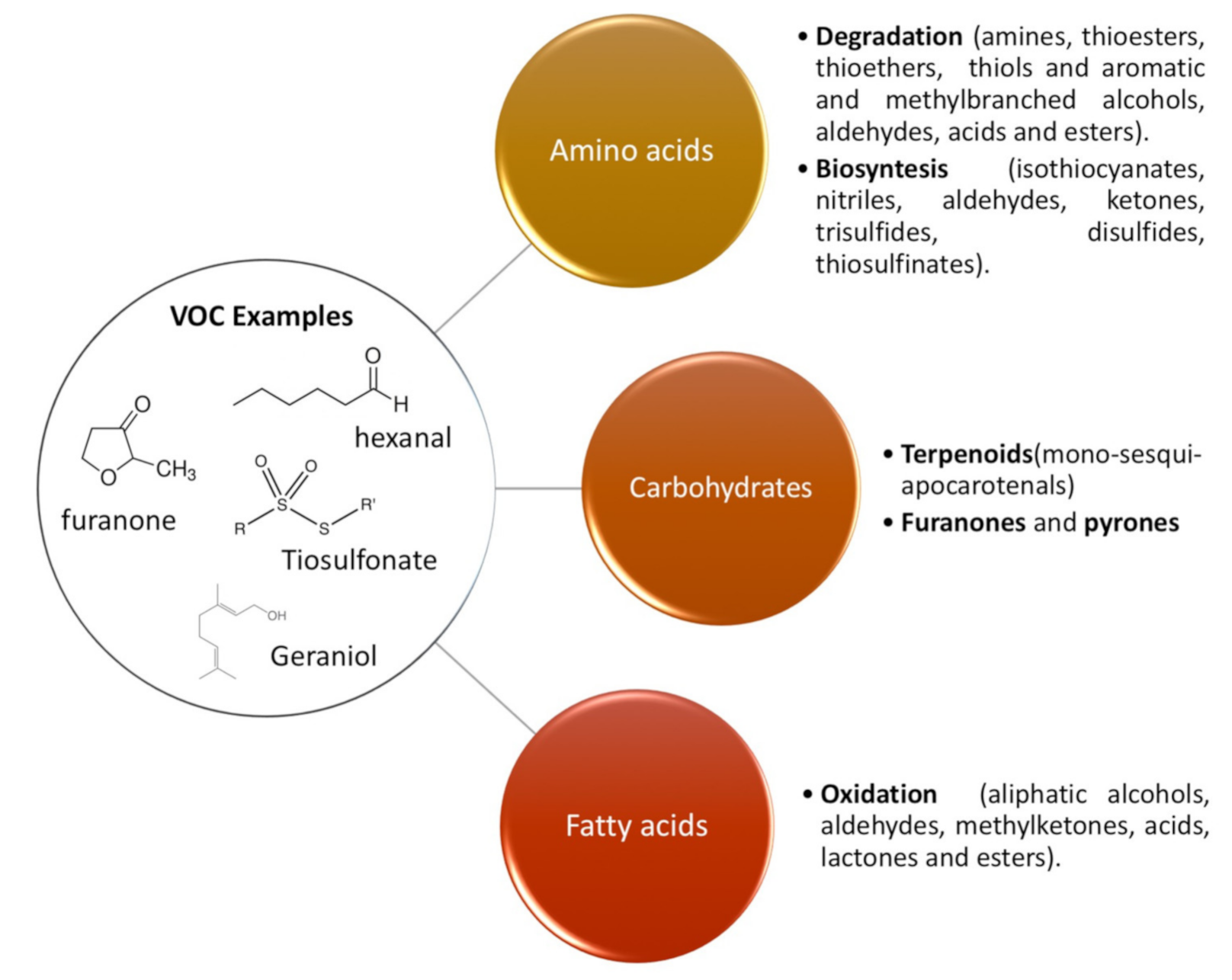 3. Analysis of VOCs Present in Nuts

The large number of volatile compounds, usually up to 200, that can be identified in nuts, make their identification and quantification difficult [10]. In this case, a separation technique such chromatography is usually employed. The volatile nature of the compounds determined makes gas chromatography (CG) coupled to mass spectrometry (MS) the preferred chromatographic type utilized for this analysis [11]. By using this technique, volatile compounds are commonly introduced in the chromatograph by using the split or splitless mode but if a higher sample capacity is needed due to a low volatile concentration in the sample, a programmed temperature vaporizer (PTV) is employed as an injection port [12]. In order to identify the main VOCs, the most extended stationary phases are nonpolar phases such as polydimethylsiloxane, columns with 5% phenyl groups or moderately polar phases such as polyethylene glycols. The length of the employed columns can vary between 25 and 30 m, but if complex mixtures of volatile compounds need to be separated, the length of the column must be increased up to 200 m [12]. Finally, the detector selected is usually a mass spectrometer that allows spectral information of the peaks to be obtained for identification of the target analytes. In routine analysis, the flame ionization detector (FID) can also be employed [12].
Prior to the identification and quantification of volatiles in nuts, the extraction of the target compounds must be optimized. A reference method for the extraction of VOCs in food matrices is liquid extraction (LE) with organic solvents. This methodology implies the employment of great amounts of organic solvents and, in many cases, low recoveries are obtained [13]. To solve this problem, liquid–liquid microextraction (LLME), dispersive liquid–liquid extraction (DLLE), stir bar sorptive extraction (SBSE) and solid-phase microextraction (SPME) are also employed. All of these analytical methodologies are commercially available, and extensively used.
SPME is nowadays the most commonly used extraction methodology for the analysis of volatile compounds in food samples, either in direct or in headspace (HS) mode, since it is a solvent-free extraction process that employs lower amounts of sample [11]. The analytical methodology consists of a fiber holder, in which a fiber coated with polymeric material is employed to retain the volatiles. After this, the analytes can be directly desorbed on the injection port of a chromatograph [14]. SPME methodology involves equilibration and extraction steps. Firstly, the sample inside a sealed vial is exposed to a selected temperature for a specific period of time in order to promote analyte volatilization into the HS in the equilibration step. Secondly, the coated fiber is immersed in the HS of the sample, maintaining a constant temperature, for a selected period of time to extract the target compounds. Experimental conditions (time and temperature values) of both steps, equilibration and extraction, commonly employed in VOCs analysis in nut samples are depicted in Table 1.
Table 1. Experimental SPME conditions (time and temperature values) of both steps, equilibration and extraction, commonly employed in VOCs analysis in nut samples.

4. Effect of Harvesting Conditions and Healthy State of Nuts on Volatile Profile

The main volatile compounds reported in raw nuts are reviewed in Table 2. As expected, several differences are detected that could be related to nut composition. Additionally, different factors could change the characteristic volatile profile of raw nuts. In this section, the effect of harvesting conditions is reviewed as well as the healthy state of nuts.
Table 2. Main VOCs of raw nuts.
The current limitation of water resources is threatening nut productivity, so new sustainable agronomic practices, such as regulated deficit irrigation (RDI), have been implemented. These irrigation strategies do not affect fruit quality [37][38]; however, water stress during the growing of nuts can modify its volatile profile [39]. For example, almonds produced under an RDI strategy presented higher total volatile content. In a study with pistachios, it was found lower water stress conditions produced nuts with higher terpene content such as α-pinene [40][41]. This compound is the most important volatile compound in pistachio samples, and it was observed that weather can influence the biosynthesis of VOCs [42] and also the harvesting time [43][23]. In another study, it was also evidenced that the flavor of pistachios was minimized by irrigation [40].
Moreover, the volatile organic profile of nuts could be modified by the state of health of the nut. The navel orangeworm (NOW) is among the major concerns in the almond industry, due to it being able to cause fungal infection. VOCs emission of almonds and their relationship with NOW have been investigated [44]. Although differences in the volatile profile have been found, the identification of particular compounds and their relationship to NOW have not been addressed. Mature almonds from the Monterey variety were evaluated for their volatile composition after mechanical damage and compared with the volatile composition of undamaged almonds. 3-pentanol and two isomers of a spiroketal chalcogran were found in the damaged almonds. Moreover, the concentration of some compounds such as a spiroketal conophthorin, numerous four-carbon esters and ketones as well as alcohol derivatives, in addition to two eight-carbon chain compounds, increased in the damaged almonds [44][45].
Changes in volatile organic compounds have been evaluated as an indicator of aflatoxin contamination [31][46][47]. Beck et al. studied the volatile emissions of whole and blanched almonds naturally contaminated with aflatoxins. Volatiles indicative of fatty acid decomposition were predominant in the samples that underwent some form of blanching. Moreover, they found an increase in the concentration of some aldehydes (e.g., hexanal, heptanal, octanal) and hexanoic acid [48]. A similar study was carried out with pistachios. A comparison of volatile compounds in healthy and naturally or artificially aflatoxin-contaminated pistachios was carried out by Georgiadou et al. They found some differences in specific compounds such as C-8 alcohols and aldehydes, sesquiterpenes, and monoterpenes, among others. These compounds allowed differentiation among contaminated and healthy pistachios by applying principal component analysis [30].

Processed nuts are consumed as a snack or added to confectionary and bakery products. For this purpose, heat treatments such as roasting and frying are necessary during nut processing to improve their sensory quality, digestibility, and microbiological safety. These heat treatments may significantly affect their properties and quality attributes, obtaining appreciable and desired changes in their texture, color, flavor and taste [49]. Interestingly, when nuts are thermally treated, new VOCs are formed from different reactions that are produced, others disappear, and others increase. Knowledge of the key odorants in thermal treatments of nuts can help to select the best preservation and thermal processing conditions. In this section, the most popular thermal processing methods of nuts and their influence on volatile profile are reviewed (Table 3).
Table 3. Most popular thermal processing methods of nuts and main VOCs reported in the literature.