Coronary artery disease (CAD) is a significant cause of illness and death amongst women. The pathophysiology, manifestations, and outcomes of Cardiovascular disease (CVD) and CAD differ between sexes. These sex differences remain under-recognized.

Cardiovascular disease (CVD), in particular coronary artery disease (CAD), is a leading cause of morbidity and mortality amongst women [1]. Physiological and pathological cardiovascular changes are influenced by atherogenic risk factors but also by hormonal changes, unique to the course of a woman’s life. Sex (biological) and gender (socio-cultural) differences influence the clinical pattern and contribute to contemporary gender differences in the diagnosis, management, and outcomes of CVD [2].

The first women-specific clinical recommendations for the prevention of cardiovascular disease (CVD) were published in 1999, even though at that time there was little gender-specific research data [3]. Updated contemporary recommendations on CVD prevention in women emphasize the importance and impact of unique risk factors, different clinical manifestations of CVD amongst women, and treatment gaps in women’s health [1]. Despite updated guidelines and the burden of CVD on women’s health, there continues to be a deficiency of awareness about CAD in women and of the unique sex-related differences in CAD [4]. This invariably leads to a lag in the diagnosis and appropriate management of CAD in women, particularly during emergent coronary scenarios [5][6][7]. Indeed, the Lancet women and cardiovascular disease Commission, which aims to reduce the global burden by 2030, highlighted that CVD in women remains “understudied, under-recognised, under-diagnosed, and under-treated” [8].

2. Pathophysiology of CAD in Women

There is a growing body of evidence to show that vasculopathy in women with CAD is somewhat different and more severe compared to that in men. Atherosclerosis is often less extensive, and acute events are more frequently due to plaque erosion rather than plaque rupture ( Figure 1 and Figure 2 ) [7][9]. Structurally, the coronary arteries themselves are of a smaller caliber size in women compared to men [10]. However, women and men have similar reference and lesion plaque burden, eccentricity, and calcium deposition in their atherosclerotic plaques [10]. 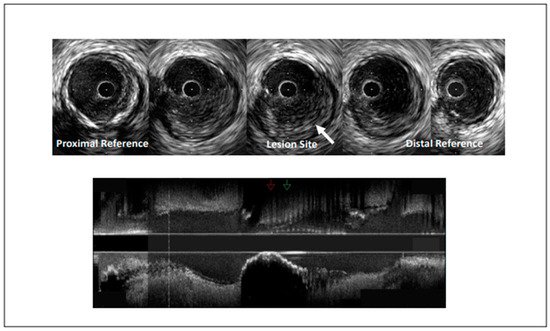 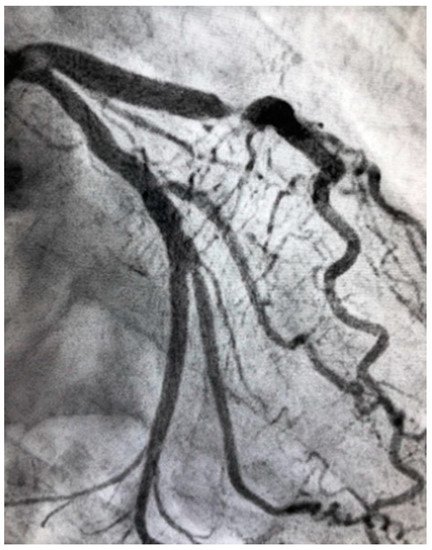 Figure 2. Severe atherosclerotic stenosis of the LAD in a female patient with ACS.

The functional aspects of the coronary vasculature are also different in women. Vascular reactivity of the endothelium and smooth muscle are responsive to sex hormones [11]. As women undergo intense hormonal influences during their lifetime, the coronary vasculature has heightened exposure to female hormones, which is believed to cause functional vascular changes. Vascular imaging studies have shown adverse changes during the menopausal transition that extend beyond the effects of aging [12]. The Women’s Ischemia Syndrome Evaluation (WISE) assessed coronary reactivity in 163 women who were referred for coronary angiography for investigation of suspected myocardial ischemia. The results showed impaired coronary vasomotor response to acetylcholine, indicating coronary endothelial dysfunction, which independently predicted adverse cardiovascular outcomes, and this was regardless of the severity of CAD [13]. There is increasing evidence to show that microvascular dysfunction is a leading adjunctive mechanism in the pathophysiology of CAD [13].

Traditional CAD risk factors account for the majority of risk for myocardial infarction both in men and women. There is, however, evidence to suggest that some of these risk factors have a more potent effect amongst women. Smoking is more detrimental to women than men, increasing the risk of myocardial infarction in women 6-fold (as opposed to men where the risk is mitigated 3-fold) [14]. There is also a compounded CAD risk between smoking and the use of hormonal treatment. This is thought to be due to prothrombotic effects. Rosenberg et al. found that heavy smoking (more than 25 cigarettes a day) increased a women’s risk of myocardial infarction by 12-fold, and this risk was compounded 32-fold in women using oral contraception [15]. Therefore, combined estrogen-progestin oral contraceptive pills should be avoided in women with a history of cardiovascular disease [16]. This compounded risk is of such concern that the use of combined oral contraceptive pills is contraindicated in women over the age of 35 who smoke and in women with severe dyslipidemia or obesity [17]. The prevalence and incidence of hypertension are higher in women over 60 years old. Women are less likely to receive medical treatment for hypertension and have poorer blood pressure control [5]. Furthermore, the incidence of hypertension is increased 2- to 3-fold in those taking oral contraception [18]. Diabetes mellitus has a more potent risk for CAD in women compared to men [5]. Diabetes mellitus also confers a higher adjusted hazard ratio (HR) of fatal CAD in diabetic women (HR = 14.74; 95% CI, 6.16–35.27) compared with diabetic men (HR = 3.77; 95% CI, 2.52–5.65). There is also a sex disparity in the intensity of cardiovascular risk reduction in women with diabetes—including poorer glycated hemoglobin levels and lower use of lipid-lowering pharmacotherapy [19]. Dyslipidemia is common in women. Adverse changes in the lipid profile are associated with menopausal transition [20]. SWAN (Study of Women’s Health Across the Nation) found that during menopause, women have substantial increases in total cholesterol, low-density lipoprotein, and apolipoprotein B [21] Furthermore, increases in high-density lipoprotein (HDL), which is associated with athero-protective properties in the premenopausal phase, have been found to be paradoxically associated with an increase in atherosclerosis progression in the postmenopausal phase [21]. This has been postulated to be due to changes in HDL function due to the hormonal alterative in this phase of life [22]. Age is a powerful predictor of CAD. While the prevalence of CAD increases with age in both men and women, the clinical presentation of CVD in women lags, on average, ~10 years behind their male counterparts [19]. Post-menopausal women more frequently have many traditional vascular disease risk conditions and these conditions cluster more frequently in them than men. These findings support the hypothesis that differences in endogenous sex hormones contribute to sex differences in CAD.

Other potentially modifiable risk factors including obesity and sedentary behaviors. These emerging risk factors are more prominent amongst women and portend a higher risk of CAD and adverse cardiovascular outcomes [5].

Women have a unique biology and unmatched phases in life characterized by hormonal changes. These include puberty, pregnancy, peripartum, and menopause. Thus, cardiovascular risk stratification in women is incomplete without thorough obstetrical and gynecological history-taking and a thorough understanding of women-specific health problems as detailed in Table 1.

There is increasing evidence that these abnormalities can cause long-lasting detrimental changes in the cardiovascular system, which can increase the risk of CAD later in life. The pathophysiology causing this increased risk is multifactorial. The WISE-CVD study found that a history of APOs was associated with lower coronary flow, indicative of coronary microvascular dysfunction [28]. The 2021 American Heart Association scientific statement on this topic asserts that there is a strong and substantial body of evidence showing that APOs are associated with clinical cardiovascular events later in life [29]. A history of APOs is a crucial part of cardiovascular assessment in women and provides an early “window of opportunity” to assess the risk of future cardiovascular disease and/or adverse events. It is still unknown whether APOs exacerbate an underlying predisposition for the development of cardiovascular disease, or whether they initiate a cascade of proceedings that causes future cardiovascular events.

Polycystic ovary syndrome (PCOS) is a common endocrine disorder affecting up to 10–15% of women of reproductive-age and is characterized by menstrual irregularities, polycystic ovaries, and hyperandrogenism [25]. It is a medical disorder associated with an increased cardiovascular risk. A recent Danish registry cohort study found that women with PCOS were at significantly greater CVD risk than those without PCOS (age-adjusted HR 1.20, 95% CI 1.08–1.34) [30].

The Women’s Health Initiative (WHI) was a primary prevention study started in 1992 involving over 160,000 post-menopausal women initiated to investigate MHT and CVD in women. MHT was initially marketed as having cardio-protective properties and as a treatment for the prevention of cardiovascular disease. However, when this was investigated, it was found that MHT of combined estrogen–progestin did not confer cardiac protection. The WHI study was stopped prematurely due to the concern that MHT may increase the risk of CAD among healthy postmenopausal women (hazard ratio for coronary heart disease of 1.24 (95% confidence interval, 1.00 to 1.54) [31]. Subsequently, there has been conflicting data. A European consensus document on this topic stated that MHT could have a potential cardiovascular benefit in women younger than 60 years old and when started within 10 years of menopause but can increase the cardiovascular risk in women with higher cardiovascular risk and after a prior cardiovascular event [17]. At present, MHT should not be used for primary or secondary prevention of cardiovascular disease per se [1].

4. Clinical Presentation of CAD in Women

Women with CCS are likely to have non-obstructive CAD, and this is more prevalent in women than in their male patients [12]. However, in both sexes, the majority of patients with an ACS have obstructive CAD, which is associated with increased mortality and MACE (in-hospital death, reinfarction, cardiogenic shock, or heart failure) compared to those with ACS with nonobstructive coronary arteries (MINOCA) [32]. While the incidence of acute myocardial infarction has been reported to be decreasing in the USA over time (2000–2014), this decline has slowed amongst women compared to men [33].

The paradox of ischemic heart disease in women has been ascribed to women having less anatomically obstructive CAD despite higher rates of myocardial ischemia and mortality compared with men [34]. This is especially pronounced in young women. The WISE study, in women with stable symptomatic CAD, demonstrated that 57% of women with symptoms and signs of ischemia had non-obstructive CAD on angiography [35]. Non-obstructive CAD is defined as <50% diameter stenosis of all major epicardial vessels and is at least twice as prevalent in women compared with men [5]. The pathophysiology suggested has been due to a more prominent process of plaque erosion and microvascular dysfunction amongst women [36]. Lack of awareness of gender differences in pathophysiology, may adversely impact CAD diagnosis in women.

The majority of women presenting with ACS will have evidence of obstructive CAD [37]. Women with ACS are more likely to present with non-ST elevation myocardial infarction (NSTEMI) than with ST elevation myocardial infarction (STEMI) [38]. The etiology of ACS in women is predominantly due to atherosclerotic disease. However, entities such as spontaneous coronary artery dissection and coronary emboli should be taken into consideration. Women with STEMI have been found to have a longer time to presentation, time to diagnosis, and admission-to-treatment time compared to men [32]. The increased risk of post-MI in hospital mortality in women is predominantly attributed to those with obstructive CAD, and specifically the young age group [32][39].