The accumulation of amyloid β-protein (Aβ) is one of the major pathological hallmarks of Alzheimer’s disease. Insulin-degrading enzyme (IDE), a zinc-metalloprotease, is a key enzyme involved in Aβ degradation, which, in addition to Aβ production, is critical for Aβ homeostasis. Here, we demonstrate that saturated medium-chain fatty acids (MCFAs) increase total Aβ degradation whereas longer saturated fatty acids result in an inhibition of its degradation, an effect which could not be detected in IDE knock-down cells. Further analysis of the underlying molecular mechanism revealed that MCFAs result in an increased exosomal IDE secretion, leading to an elevated extracellular and a decreased intracellular IDE level whereas gene expression of IDE was unaffected in dependence of the chain length. Additionally, MCFAs directly elevated the enzyme activity of recombinant IDE, while longer-chain length fatty acids resulted in an inhibited IDE activity. The effect of MCFAs on IDE activity could be confirmed in mice fed with a MCFA-enriched diet, revealing an increased IDE activity in serum. Our data underline that not only polyunsaturated fatty acids such as docosahexaenoic acid (DHA), but also short-chain fatty acids, highly enriched, for example in coconut oil, might be beneficial in preventing or treating Alzheimer’s disease.

In general, lipids seem to play an important role in the pathogenesis of AD. There are extensive alterations in the lipid and fatty acid (FA) composition of human brain tissue affected by the disease. This might influence Aβ production, since a strong effect of the lipid environment on proteolytic APP-processing is well established [1][2]. In contrast, the impact of lipid homeostasis on Aβ-degrading mechanisms is largely unknown. Therefore, in the present study, we analyzed the effect of FA acyl chain length on Aβ degradation. This is of particular interest as medium-chain FAs (MCFAs), similarly to PUFAs, have been reported to be advantageous in mild cognitive impairment (MCI) and early stages of AD. MCFAs are saturated FAs (SFAs) consisting of 6 to 12 carbon atoms, which can be nutritionally administered as medium-chain triglycerides (MCTs) or coconut oil. The effects of MCFAs in helping ameliorate the cognitive decline caused by AD are generally attributed to the elevation of circulating ketone bodies, compensating for the impaired cerebral glucose metabolism [3][4][5][6][7][8][9][10][11]. However, we recently found that the MCFA decanoic acid (10:0) promotes neuronal health independent of ketone levels by reducing oxidative stress levels [12]. The results of the present study revealed that MCFAs might additionally act by stimulating IDE-dependent Aβ degradation, while saturated very long-chain FAs (VLCFAs) have the opposite effect.

To analyze the effect of FA carbon chain length on total Aβ degradation, mouse Neuro2a cells (Neuro2a control) were treated with SFAs of increasing length with PC as a constant headgroup (PC10:0, PC12:0, PC14:0, PC16:0, PC18:0, PC20:0, PC22:0 and PC24:0). After preincubation with the different PC species (10 µM) for 18 h, cells were incubated with the phospholipids along with synthetic human Aβ40 peptides (0.5 µg/mL) for a further 6 h. Afterwards, the remaining, non-degraded human Aβ40 in the cell culture supernatant was quantified by western blot analysis. As shown in Supplementary Figure S2A, there was an 80.5 ± 1.0% reduction in synthetic human Aβ40 concentrations corresponding to 19.5 ± 1.0% remaining human Aβ40 after the 6 h incubation period. Considering the linear correlation (R2 = 0.9952, p < 0.001) between the quantified band intensities and synthetic human Aβ40 in the range of 0.5–0 µg/mL (Supplementary Figure S2B), one can assume that the obtained signals are within the linear range of detection.
The level of remaining human Aβ40 in the medium of cells treated with the single PC species were normalized to that in the supernatant of cells treated with the control lipid PC16:0 (set at 100%). PC16:0 contains palmitic acid (16:0), one of the most abundant SFAs within the human brain [13]. Importantly, the control lipid revealed no significant effect on total Aβ degradation compared to the solvent EtOH (p = 0.552) (Supplementary Figure S3A). As illustrated in Figure 1A and Supplementary Figure S3B, a strong effect of FA acyl chain length on total Aβ degradation was observed. In comparison to PC16:0, PC10:0 and PC14:0 significantly reduced the level of remaining non-degraded human Aβ40 in the cell culture supernatant (p = 0.030 and p = 0.005, respectively), indicating that PC10:0 and PC14:0 increase Aβ degradation. Remaining human Aβ40 tended to be decreased in the presence of PC12:0 as well (p = 0.092). In contrast, the level of remaining human Aβ40 was slightly increased by PC20:0 and significantly elevated by PC22:0 and PC24:0 (p = 3.3 × 10−8 and p = 1.9 × 10−4, respectively), again, compared to PC16:0 (Figure 1A). Based on these data, a significant correlation between the FA acyl chain length and the level of remaining human Aβ40 peptides was found (R2 = 0.76, p = 0.005) (Figure 1B), and the percentage reduction of the supplemented Aβ40 peptides as a function of treatment was additionally calculated (Supplementary Figure S3C). 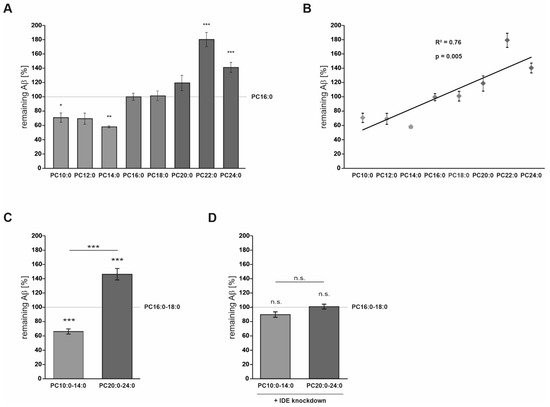 2.2. FA Acyl Chain Length Affects the Secretion of IDE and Its Catalytic Activity

MCFAs are endogenous activators of the peroxisome proliferator activated receptor γ (PPARγ). PPARγ binds to a functional peroxisome proliferator-response element (PPRE) in the IDE promoter region and has been reported to promote IDE gene transcription in primary neurons [16][17]. For these reasons, we analyzed whether IDE gene expression is affected by FA acyl chain length under the conditions chosen in the present study. RT-PCR analysis revealed that the treatment of Neuro2a control cells with both PC10:0–14:0 and PC20:0–24:0 had no impact on IDE gene expression compared to control (p = 0.763 and p = 0.717, respectively) (Figure 2A). This finding demonstrates that the FA acyl chain length-dependent effects on IDE-dependent Aβ degradation (Figure 1) are not based on alterations in IDE gene expression. 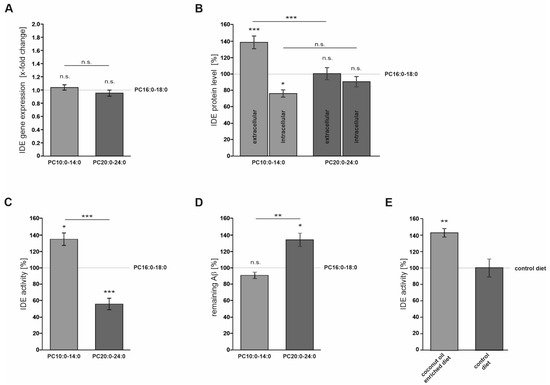 The relationship between Aβ generation and degradation determines the cerebral Aβ accumulation, which is one of the major histopathological hallmarks of AD [22][23]. While it is well established that Aβ production is strongly affected by lipids and FAs [1][2], less is known about the impact of the lipid environment on Aβ degradation. Therefore, in the present study, we analyzed the effect of FA acyl chain length on the enzymatic degradation of the peptide.
Neuro2a cells were exposed to saturated FAs with an acyl chain length ranging from 10 to 24 C-atoms before total Aβ degradation was measured. PC represents the most abundant phospholipid in mammalian cellular membranes [24], palmitic acid (16:0) and stearic acid (18:0) are the major SFAs in human brain tissue [13]. Correspondingly, FAs were applied as PCs containing identical FAs in the sn1- and sn2-position, and PC16:0 or PC16:0–18:0 (for the grouped evaluation) were chosen as controls. This experimental setup enabled us to analyze the impact of the FA acyl chain length regardless of possible effects of the choline headgroup or the glycerophosphoric acid. Liposomes containing the used phospholipids are efficiently taken up by cells. This results in the incorporation of the supplemented PCs into cellular membranes, probably affecting, e.g., membrane fluidity and structure, or their phospholipase A-dependent hydrolysis into lysolipids and free FAs [25].
In Neuro2a cells, PCs containing MCFAs and shorter-chained FAs (PC10:0–14:0) significantly stimulated the degradation of exogenous human Aβ40 peptides conducted by IDE, one of the major Aβ-degrading proteases [20][26][27]. The elevated Aβ degradation in the presence of PC10:0–14:0 was accompanied by changes in IDE sorting and a direct stimulating effect on IDE activity (Figure 3). PC10:0–14:0 was found to specifically increase the release of IDE into the extracellular space, a process which occurs at least partially in association with exosomes [19][28]. IDE exosomally released by Neuro2a has been reported to be proteolytically active as the inhibition of exosome release leads to increased endogenous Aβ levels in the cell culture supernatant [19]. Considering that both exosome release in general and exosome-associated IDE secretion are known to be strongly affected by various lipids [28][14][29][30][31][32], one can assume that saturated MCFAs and shorter-chained FAs stimulate the exosomal IDE secretion into the extracellular compartment. This might lead to the elevated degradation of synthetic human Aβ40 peptides added to the medium of cells treated with PC10:0–14:0, which could be further strengthened by the increased IDE activity in presence of these PC species. In this context, a recent publication of Song et al. should be mentioned which reports that IDE is not secreted from cultured cells, but rather released nonspecifically as a consequence of reduced membrane integrity. In this study, only ~1% of total cellular IDE was released from HEK-293 and BV-2 cells. In the conditioned medium of intact Neuro2a cells, the enzyme was almost undetectable, even after concentrating the samples 10-fold [33]. In contrast, we and others [19] found measurable amounts of IDE in the cell culture supernatant of this cell line. Possible reasons for these divergent results include differences in the used growth medium, the cell to medium ratios, the methods for the concentration and detection of IDE as well as clonal heterogeneity. Further, Song et al. found LDH and two other measured cytosolic markers (glyceraldehyde dehydrogenase (GAPDH) and pitrilysin) to be released at the same relative levels as IDE from HEK-293 and BV-2 cells treated with lovastatin, implying that IDE is released nonspecifically by lysed cells [33]. However, unlike lovastatin, PC10:0–14:0 seems to specifically stimulate the secretion of IDE since it did not affect the release of SEAP, a marker for the constitutive secretory pathway [34]. Additionally, two established indicators for cytolysis, the activity of LDH in the conditioned cell culture medium and the cellular uptake of PI [35][36], were unaltered by the different phospholipids. Altogether, these data make a disruption of plasma membrane integrity very unlikely as the cause for the increased IDE release from cells treated with PC10:0–14:0. This is in line with other studies reporting a release of IDE into the cell culture supernatant in the absence of detectable LDH [20][19]. The reason for these differences is unclear but could be based on differences in the cell lines used and the cytotoxic potential of the applied stimulants.

Figure 3. Schematic overview of the proposed effects of MCFAs and VLCFAs on IDE dependent Aβ degradation. The increased Aβ degradation in the presence of PC10:0–14:0 seemed to be based on changes in IDE sorting and a direct stimulating effect on IDE activity. In contrast, PC20:0–24:0 decreased the IDE-dependent Aβ degradation, probably by directly inhibiting the catalytic activity of the enzyme.
On the other hand, the saturated VLFAs contained in PC20:0–24:0 significantly reduced the IDE-dependent Aβ degradation, probably by directly inhibiting the catalytic activity of the enzyme (Figure 3). In line with these data, an in vitro-inhibition of IDE-dependent insulin degradation by long-chain free FAs (C16–C20) with IC50-values ranging from 10 to 50 µM has been reported in the study by Hamel et al., mentioned above [37]. A direct interaction between FAs and IDE is further supported by the suspected “cytosolic fatty-acid binding proteins signature” within the enzyme and our previous observation that different FAs distinctly bind to recombinant IDE [37][14]. Altogether, our cell culture data indicate that saturated MCFAs and shorter-chained FAs are more beneficial than saturated longer-chained FAs and VLCFAs with respect to IDE-dependent Aβ degradation.
An increased IDE activity was also observed in the serum of mice upon dietary supplementation of MCFAs in the form of coconut oil. We would like to point out that the effects obtained with transgenic mice fed with coconut oil are comparable to the effects observed in cell culture. By utilizing an IDE knock-down, we could confirm that the major effect of coconut oil is linked to the Aβ degrading enzyme IDE. Due to limitation of samples size in mice, this confirmation which would be ideally done by a specific inhibitor of IDE (e.g., 6bK) was not possible. Therefore, we cannot rule out that, in vivo, other proteases besides IDE are affected by coconut oil, which is a potential caveat in our study. In addition, we suggest further studies investigating whether mutations in the “cytosolic fatty acid binding protein signature” would reinforce the notion that MCFAs regulate IDE. In order to address this question, further research is warranted.