Morphology of the Spleen in Oreochromis niloticus

The spleen is a separate organ of the teleost, playing an essential role in immune reactions. The morphology of the spleen is different from the fish species. Little knowledge about the spleen structure and the blood splenic barrier (BSB) in Nile tilapia has been reported. The present study showed that the spleen of Nile tilapia could be portioned into three subregions, and the BSB lay in the middle layer, composed of the cuboidal-shaped endotheliocytes and the surrounding reticular fibers of the ellipsoid capillaries. Our results enriched the research of immune tissues and system in tilapia and provided reference for the study of spleen in other fish species.

The spleen lay in the peritoneal cavity, covered by the liver post-dissected from the left side of the body and was adjacent to the anterior gut wall and the stomach observed from the right side of Nile tilapia (Figure 1A). It was solid, reddish-brown, no accessory, and tongue-shaped with a big round head and a slight end. The absolute weights of spleens were 0.07–0.25 g, and spleen indexes were 0.03–0.14. The splenic portal passed through the head of the spleen and ran parallelly along the splenic longitudinal axis (Figure 1B). 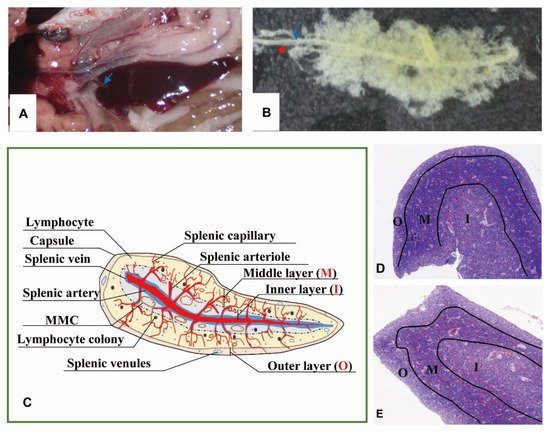 2. Micromorphology of the Spleen

No boundary existed between red pulps and white pulps under a magnification of 40×. However, three subregions could be distinguished according to the sandwich-colored appearance (light blue-navy blue-light blue). The three subregions were named according to their locations (Figure 1C–E): (1) Outer layer: light blue, closed to the capsule; (2) inner layer: light blue, in the center of the spleen with features of vessels; (3) middle layer: navy blue, sandwiched between the out layer and inner layer, characterized by blue clumps. The components were further observed with a magnification of 400×, and a schematic diagram was painted in Word 2003 (Figure 2). 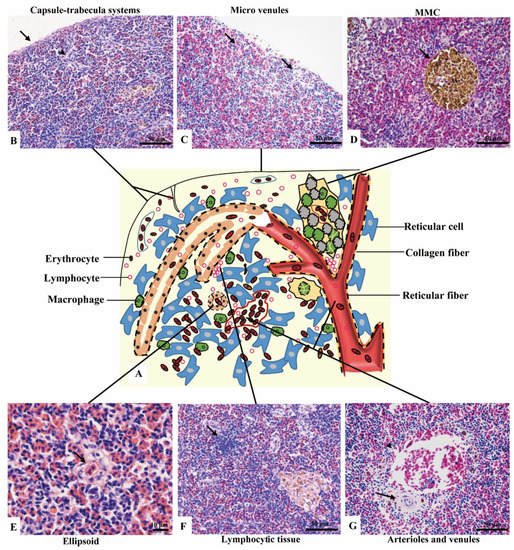 Figure 2. The components of the spleen (H&E staining). (A). A schematic representation of spleen; (B). The splenic capsule-trabecula systems, showing thin capsule (→) and poorly developed trabecular (▲); (C). The micro venules (→) underneath the capsule, consisted of a signal layer of flat endothelial cells with a capacity of 4–6 erythrocytes; (D). The MMC (→) brown-black color, sub-circular shape, and surrounded by a single layer of flat cells; (E). The ellipsoid (→) consisted of cuboidal-shaped endothelial cells; (F). A small cluster of lymphocytes (→) in the middle layer; (G). An arteriole (→) and a venule (▲) of the inner layer.
(1) Outer layer
Capsule and the underneath micro-venules were the main elements of the outer layer. The outmost capsule was about 2.6 ± 0.9 μm thick, composed of a single layer of flat mesothelial cells and a few connective tissues. The trabeculae were only and occasionally observed (Figure 2B). The content of erythrocytes was the least among three layers (Figure 2C), as well as the number of lymphocytes, which distributed scattered. MMCs were barely observed.
(2) Middle layer
Red pulps were abundant and the erythrocytes were the richest among the three sub regions. The specific blue clumps outstanding in this layer under 40× magnification were proved to be the small clusters of lymphocytes (Figure 2F). Scattered lymphocytes were also observed. The ellipsoid, another outstanding feature, was distinguished by the pink-colored central capillary (also known as Ellipsoid capillary, EC) (Figure 2E). Melanomacrophage centers (MMCs) appeared independently (Figure 2D).
(3) Inner layer
The vessels stood out in this layer, including the splenic artery and vein, arterioles, and venules (Figure 2G). The fused MMCs were another character, which was commonly found around the vessels. Besides, the lymphocytes were scattered throughout the subregion.

Collagen fibers accounted for 7.7–14.3% of the entire splenic area, most of which spread in the splenic cords, and a few of them surrounded the splenic artery and vein (Figure 3A–C). In contrast, reticular fibers accounted for 11.4–18.8% of the entire area, which spread throughout the spleen. About 5.7–9.9% reticular fibers surrounded inside and outside of the EC’s endotheliocytes (Table 1) (Figure 3D–F). 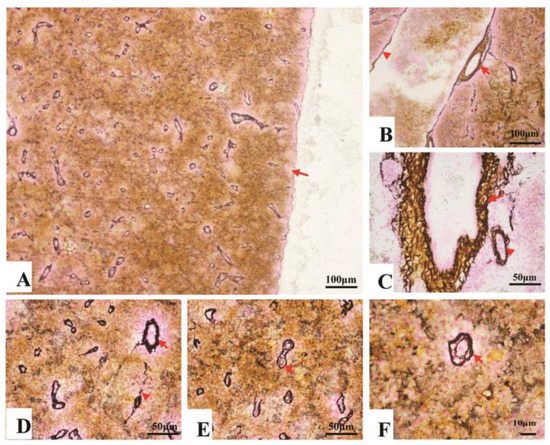 The splenic cords were mainly composed of reticular cells adjacent to form the splenic net. The erythrocytes passed through the net mesh post-deformation (Figure 4A,B). Close to the net mash monocytes/macrophages and lymphocytes were commonly observed (Figure 4C). A gap about 0.4–1 μm were found between adjacent cells of ellipsoids (Figure 4D). 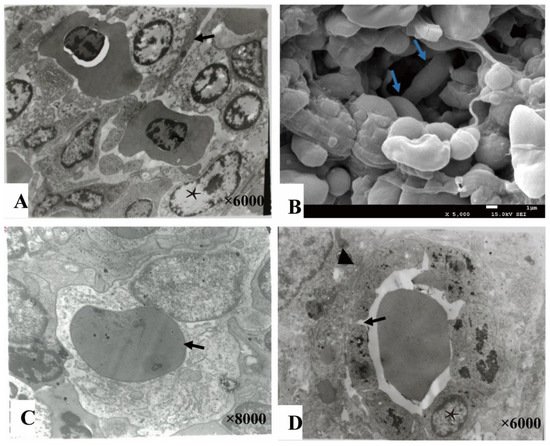 Figure 4. The splenic cord and ellipsoid. (A). The reticular cells (★) were adjacent with each other forming net mast allowing deformable erythrocytes (→) to pass through (TME); (B). The splenic net, formed by reticular cells allowing the erythrocytes (→) to pass through post deformation (SEM); (C). An erythrocyte (→) engulfed by a monocyte cell; (D). The ellipsoid consisted of cuboidal-shaped endothelial cells (★) by gap junction (→), and surrounded by fibers (▲).

The spleen is a critical organ in immunity of teleost [1]. A larger spleen is regarded as an indirect indicator of immunological status, and reducing the size of the spleen would accelerate the time to death post-challenged [2]. However, the underline mechanisms of the spleen in infection are still ill-defined. To lay basic information for further research, we focused on presenting the splenic structure and the BSB in Nile tilapia. We studied the histology of the spleen and explored the location and function of BSB. We portion the spleen into three subregions according to the sandwiched appearance under 40× magnification. We also found that the BSB existed in the middle layer, composed of the endotheliocytes of EC and the surrounding reticular fibers. Furthermore, the positive correlation between ACP and Trypan blue revealed the clearance function of BSB. Our results will lay the basic information for the mechanism researches, such as the relationship between spleen size and immune, splenic immune process, and pathogenesis.
Usually, the splenic structure was described according to the subregions of the mammals’ spleen, including red pulps, white pulps, marginal region, and capsule [3]. However, in the spleen of teleost red pulps and white pulps are mixed without marginal region, making it difficult to locate each component and compare their differences. According to the sandwiched appearance, we portioned the spleen into three subregions. To our best knowledge, this is the first report about portioning the spleen into three layers by the sandwiched appearance displaying under a magnification of 40×. We described the conventional elements of the spleen in each layer and pointed out the characteristic features of each layer to facilitate recognition. This portion method will guide precise sampling of the ultra-micro specimens after becoming familiar with the location of the components. Furthermore, it could contribute to recognizing the histopathological changes of the spleen post-infection.
The splenic ellipsoid was a unique structure, known as a barrier for filtering and phagocytosis in the chickens [4], soft-shelled turtle (Pelodiseus sinensis) [5], Japanese conger (Conger myriaster) [6] and darkbarbel catfish (Pelteobagrus vachelli) [7]. Consistently, we found that the BSB of Nile tilapia also lay in the ellipsoid, function as a barrier keeping the Trypan blue in the ellipsoid and preventing them from the red pulp. T. Furukawa et al. [6] proved that the ellipsoids filter particles depending on their size. In the present study, Trypan blue was trapped by the ellipsoids, suggesting that the ellipsoids could recognize the size of Trypan blue. Post-injection (i.v.), Trypan blue was only confined by the reticular fibers, while the endotheliocytes of EC engulfed the particles when injected through the abdominal cavity. Since no Trypan blue was observed in the capsule of spleen, we suggested that Trypan blue post-intrapeneal injection entered the spleen through blood circulation instead of permeating through the splenic capsule. Therefore, the filter sites of ellipsoids may also depend on the entrance of particles. Besides, carbon, post-injection into chicken and duck of one-day-old, was predominantly found in the extracellular space of the ellipsoids [8], similar to our results that Trypan blue was mainly in the red pulps post-injection (i.v.). Therefore, we suggested that reticular fibers in Nile tilapia’s ellipsoids may be as undeveloped as that in a one-day-old duck.
ACP is an indicator of lysosomes, and it was enhanced during the toxic exposure period or under stress conditions [9][10]. Normally, the splenic clearance of the blood is modest, but when stressed, the clearance capacities will expand [11]. Consistently, we found that a small amount of ACP was expressed in the endotheliocytes of ECs, and the expression of ACP upregulated along with the increase of Trypan blue. Therefore, we indicated that the clearance capacities of endotheliocytes expanded under the stress of Trypan blue.