The green peach aphid (Myzus persicae Sulzer), a major and harmful chili aphid usually managed using chemical pesticides, is responsible for massive annual agricultural losses. The efficacy of two protein elicitors, PeaT1 and PeBC1, to stimulate a defensive response against M. persicae in chili was studied in this study.

PeaT1 and PeBC1 used two separate strategies to generate resistance to M. persicae, the green peach aphid. First, aphid population fall was stable in PeaT1- and PeBC1-treated chili seedlings (Table 1 and Table 2), with percentage declines in population count in PeaT1 and PeBC1 treatments compared to the buffer and control treatments. M. persicae preferred to feed on the control chili seedlings in the host selection experiment. The frequency of M. persicae colonizing PeaT1- and PeBC1-treated plants was much lower a day after the aphid was inoculated and two days after spraying the seedlings than the control, which revealed aphid colonization in regions other than buffer and PeaT1- and PeBC1-treated areas. Some aphids chose to colonize control regions over those treated with PeaT1 and PeBC1 based on their feeding habits (Figure 1A,B). Second, aphids that were fed on seedlings treated with PeaT1 and PeBC1 had a longer developing period than those that were not, whereas M. persicae that were fed on seedlings treated with PeaT1 and PeBC1 had a lower everyday reproductive ability (second and third nymphal instars). The second and third generations grew at a slower pace (Figure 2A,B). 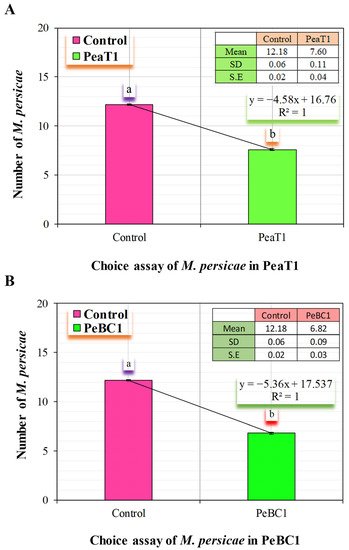 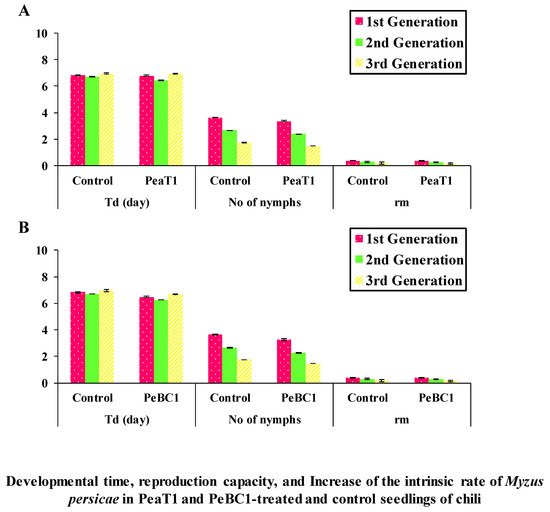