Modern definition of polyelectrolytes (PEs) according to various sources describes them as polymer chains with charged monomer units that can dissolve into a charged macroion and small counterions upon the PE dissolution in a polar solvent. The PEs properties can be ascribed to three major categories: origin, matrix, and charge. The PEs origin associates with the source of the raw polymer precursor, where the molecules such as proteins, cellulose, and deoxyribonucleic acid (DNA) represent the natural PEs. Opposed, with the development of chemical synthesis and especially polymeric chemistry a large field of synthetic polyelectrolytes have emerged to accommodate the needs of petrochemical, pharmaceutical, water recovery, and other industries. These synthetic routes may roughly be distinguished as ‘bottom-up’ by monomer polymerisation and ‘top-down’ by post-synthetic modification of neutral polymers.

The steep increase in anthropogenic greenhouse gas (GHG) emissions over the last century, i.e., carbon dioxide (CO2), methane (CH4), nitrous oxides (NOx), water vapour (H2O), etc. led to irreversible environmental changes observed today [1]. These changes were spurred by the intensified fossil fuels consumption to sustain fast industrial and economic growth. High fuel consumption rate accelerated the release and accumulation of carbon dioxide (CO2) in the atmosphere disrupting the natural cycle of carbon.
Carbon capture, sequestration, and use (CCSU) strategies promote the responsible usage of fossil fuel through minimisation and treatment of exhaust GHG. CCSU directly implies the necessity to capture CO2 on-site at the production facilities, i.e., power plants, and to store it in suitable locations or to valorise it as a valuable source [2]. The CO2 release into atmosphere ought to be restricted through use of pre-combustion, oxy-fuel combustion and post-combustion capture. The post-combustion CO2 capture offers simpler control strategy for emissions containing low CO2 content or flue gas (<15 mol %), as it enables a direct integration of a purification step in the existing plant facilities (retrofitting) [3].
Post-combustion CO2 capture balances on a justifiable comparison between the most advanced CO2 separation technologies, including physical adsorption, chemical absorption, membrane separation and cryogenic distillation (Figure 1) [4]. The three main parameters to assess are CO2 content in the feed stream, energy required per kilogram of CO2 captured, and the purity of the CO2 reach product stream (permeate). Although the first three technologies offer robust solutions already at low CO2 concentrations in the feed (1–15%) and achieving the threshold of 80% CO2 purity, their energy demands vary drastically (Figure 1) [5][6][7][8]. Cryogenic distillation becomes financially attractive only if the feed already contains more than 90% CO2 [9]. This makes its direct application for one-stage post-combustion CO2 capture impossible and renders the membrane-based CO2 separation an aspiring technology for innovative development and research.

Figure 1. Comparison of existing CO2 capture technologies based on the energy demand for achieving certain volumetric ratio of CO2 in product stream and respective CO2 content in feed stream presented alongside the most common advantages and disadvantages of each process. The numerical data is collected across several publications and presented as reported [4][5][6][7][8][9].
Membrane gas separation offers several advantages over conventional CO2 capture technologies (i.e., amine scrubbing, regenerative solvents and cryogenic distillation), such as moderate energy requirements, as well as operational and maintenance simplicity [10]. However, the implementation of membrane-based systems for CO2 recovery from post-combustion flue gases is hindered by low partial pressure of CO2 in the feed [11]. To compete with more mature technologies, membrane systems with advanced separation characteristics ought to be developed [7].
Membranes for flue gas CO2 capture processes should have suitable combination of CO2 permeability and carbon dioxide versus nitrogen (CO2/N2) selectivity, be thermally and chemically stable, and exhibit no plasticisation and/or physical ageing, while maintaining low cost and ease of module manufacturing [12]. Currently polyimide membranes occupy a major position on the post-combustion membrane-based separation market due to robustness [12][13]. Versatile chemical structures of these polymers provides increased CO2 solubility in the polymer matrix, and tailored chain packing density ensures faster diffusion rates through the selective layer [14][15]. Many alternative membrane concepts emerged based on polymers of intrinsic micro-porosity [16][17][18], thermally-rearranged polymers [19][20][21][22], organic/inorganic hybrid materials (mixed matrix membranes) [23][24][25][26], or facilitated transport materials [27][28][29][30]. Facilitated transport materials are often associated with the quaternary ammonium groups also present in polyelectrolytes [31][32]. However, the scope of using polyelectrolytes in membrane-based CO2 separation from flue gas is much broader.
Polyelectrolytes have started gaining broad attention of the membrane community since the first publications emerged in the end of the last century. Later the unprecedented success of the ionic liquids (IL) have shifted the interest towards the monomer polymerisation approach with polymerisable ionic liquids (PILs) coming to the front line of the research on CO2 capture from flue gas (Figure 2a) [33][34][35][36][37]. This interest arose following the reports of high CO2 sorption capacities of IL and desire to improve long-term stability performance of IL membranes through combining the polymer chain flexibility and robustness with the physico-chemical potential of IL. Several detailed reviews were published in the last few years extensively covering all aspects of PIL synthesis and processing [38][39][40][41][42]. Thus, this review will mainly focus on ‘top-down’ functionalisation of existing and commercially available polymer precursors yielding advanced polyelectrolyte materials for CO2 separation (Figure 2b).

Figure 2. Crucial difference between polymerised ionic liquids (PILs) (a) and post-synthetic or ‘top-down’ modification of polyelectrolytes (b) stems from chemical origin of polymer chain bearing the ionic charges. In PILs it forms by polymerisation of ionic monomers, and in ‘top-down’ polyelectrolytes it is already present in parent material. 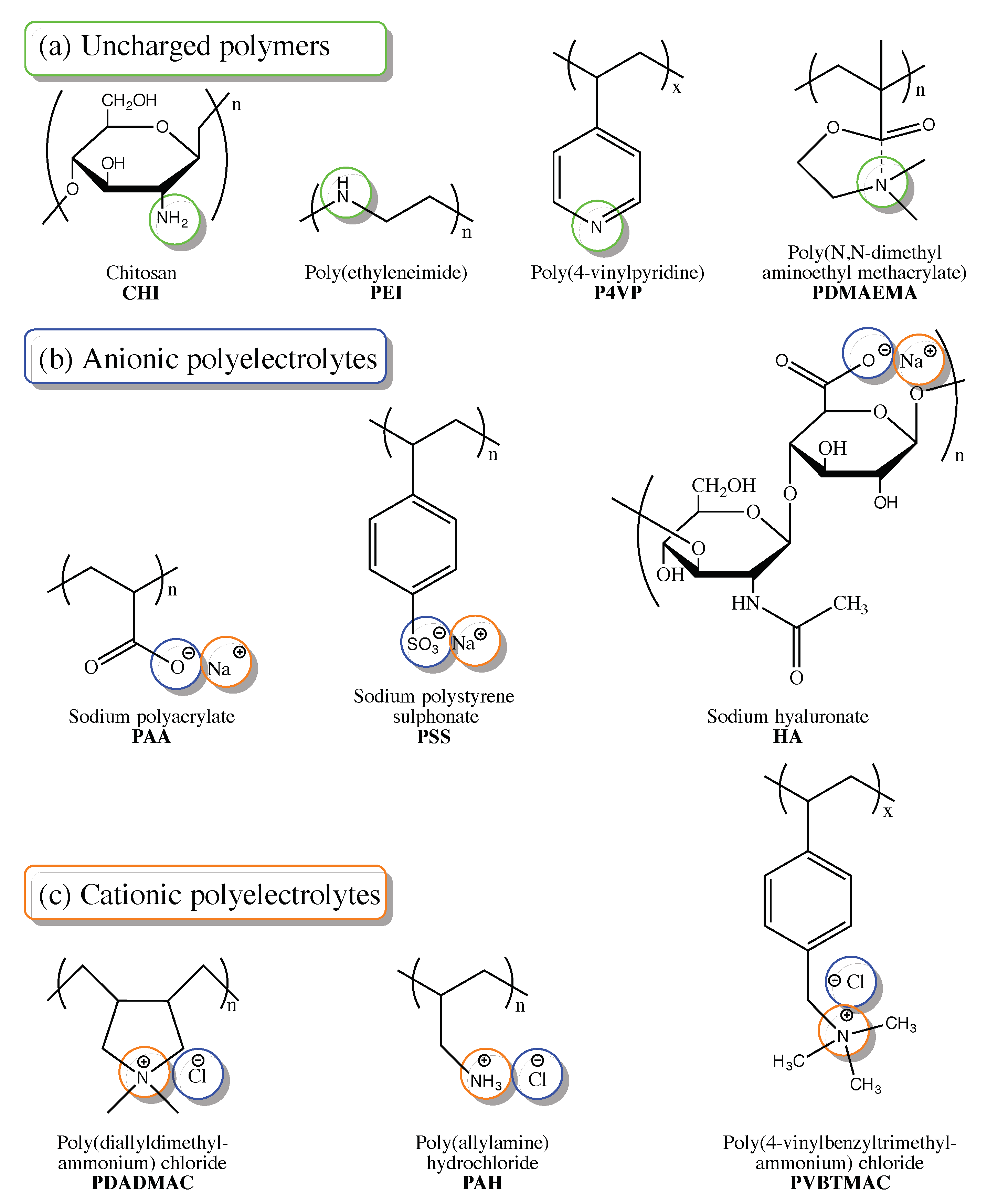 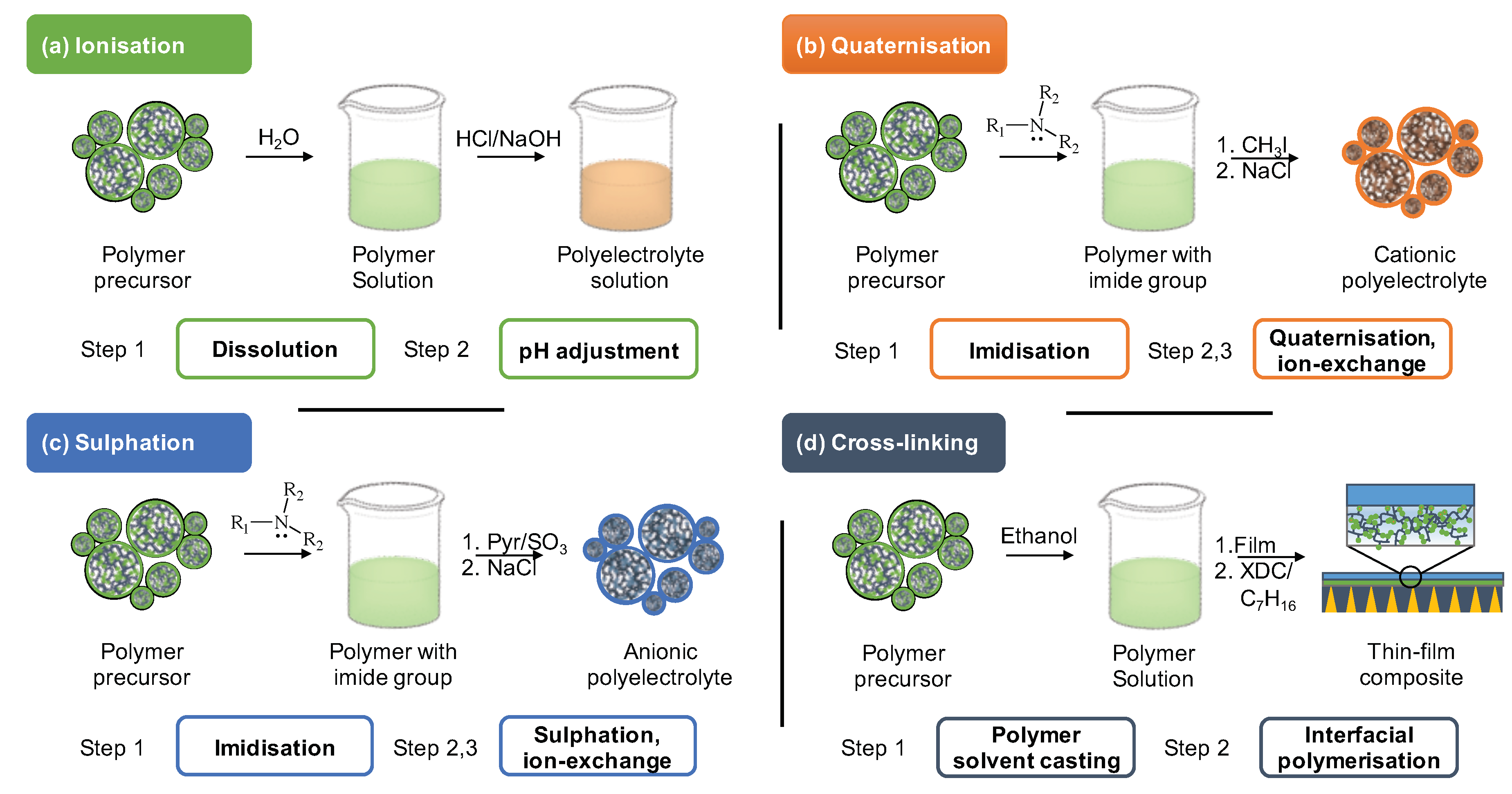 The industrial application of membranes for fluid streams separation (liquid and gas) became possible with the invention of phase inversion process for the preparation of polymeric asymmetric membranes by Loeb and Sourirajan [45]. This process ensured the formation of a thin selective dense layer on the surface of the membrane supported by the bulk porous structure. The thinner selective layer provides the faster mass transfer of the desirable component across the layer which is described by solution-diffusion mechanism [46]. In this case, the flux across the membrane exhibits a trade-off behaviour with the selectivity, comprehensively represented by a Robeson plot for gas separation of CO2/N2 [47]. Vast efforts were directed at the development of alternative membranes to combat the trade-off behaviour yielding materials with alternative transport mechanisms: molecular sieving effect, facilitated transport, and various combinations of thereof [48]. PEs materials proved to be a suitable material to enhance facilitated transport of CO2 molecules from flue gas. The stable PE-based membranes for CO2 capture were prepared as thin dense films using four main methods: solvent-casting layer deposition, Langmuir–Blodgett (LB) process, layer-by-layer (LbL) assembly, and chemical grafting on/to the support.

The fast growing numbers of newly synthesised polymer materials prompted Robeson to propose an empirical boundary for their gas separation performance evaluation in terms of permeability and selectivity for the given gas [47][49]. The boundary for various gas pairs including CO2/N2 is based on theoretical limit associated with the kinetic diameter of gas molecules. While the Robeson plot provides a comprehensive representation of material properties in comparison to theoretically possible, a similar plot proposed by Merkel et al. compares the membrane performance to industrially relevant standard and best market case in terms of permeance and selectivity for the given gas [50].
This review attempts to show the prospective of PE application in membranes for CO2 separation from flue gas on industrial level. Thus, the practical solution would be to combine Robeson and Merkel plot in one. For this purpose, all the PE-based membranes separation parameters reported in the literature for this application and discussed in the previous sections were converted to CO2 permeance (GPU) and CO2/N2 selectivity (dimensionless). If a hypothetical layer of the PE material is assumed to have a thickness of 1 micron then Robeson and Merkel plots can be merged and the permeability value will match the permeance value. Further in the text it is referred to as a joint R-M plot.
Figure 5 positions all materials covered in this review of the R-M plot. The majority of the materials discussed are situated in the top half of the plot. The exceptions are the first attempts to produce PE based membranes for CO2 capture by LbL assembly that show no selectivity for CO2 [51][52]. This supposedly was due to minor defects present in the deposited PE films. 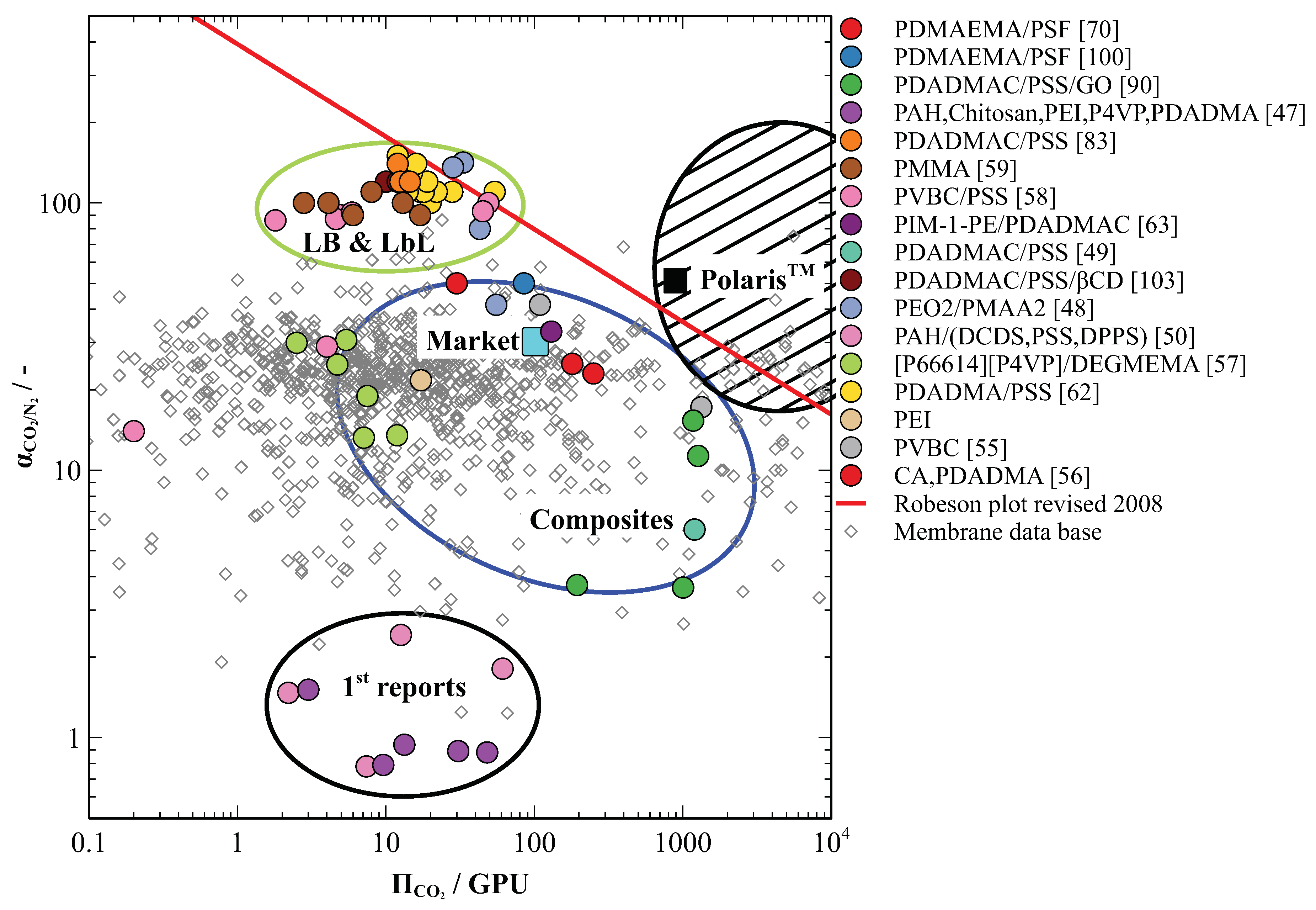 Figure 5. Comparison of PE-based membranes for CO2 separation from flue gas on the R-M plot where the value indicated with the cyan square represents the market standard for CO2 removal from natural gas and the value indicated with the black square represents the best performing membrane for CO2 capture available on the market. The striped area suggests the desirable separation performance of CO2 selective membranes for efficient capture from flue gas
PE-based membranes prepared by LB and LbL methods shows outstanding selectivities for CO2 and are positioned in the top left plot quarter in the vicinity of the Robeson boundary (Figure 5 in green oval). Several exemplars even overcome the Robeson boundary suggesting further possibilities for the performance improvement. However, these membranes demonstrate low CO2 permeance that cannot compete with the industrial market cellulose acetate (CA)-based standard for natural gas processing. This presents a drawback for industrial application as the selective layer matrix is highly cross-linked ionically and restricts fast transport of CO2 molecules across the membrane.
The thin-film composite membranes and a few LB composite membranes appear in the middle area of the plot. They show moderate performance in terms of selectivities comparable or inferior to market standard. However, some of these membranes have considerably improved CO2 permeances, which brings them closed towards the desirable area on the R-M plot. Such performance characteristics together with the ease of solvent-casting production technology, broadly available on the membrane market, make they a suitable candidate for further industrial upscaling of PE-based membranes for CO2 separation from flue gas.