The Mediterranean Diet (MD), UNESCO Intangible Cultural Heritage of Humanity, has become a scientific topic of high interest due to its health benefits. The aim of this review is to pick up selected studies that report nutrigenomic or nutrigenetic data and recapitulate some of the biochemical/genomic/genetic aspects involved in the positive health effects of the MD. These include (i) the antioxidative potential of its constituents with protective effects against several diseases; (ii) the epigenetic and epigenomic effects exerted by food components, such as Indacaxanthin, Sulforaphane, and 3-Hydroxytyrosol among others, and their involvement in the modulation of miRNA expression; (iii) the existence of predisposing or protective human genotypes due to allelic diversities and the impact of the MD on disease risk. A part of the review is dedicated to the nutrigenomic effects of the main cooking methods used in the MD and also to a comparative analysis of the nutrigenomic properties of the MD and other diet regimens and non-MD-related aliments. Taking all the data into account, the traditional MD emerges as a diet with a high antioxidant and nutrigenomic modulation power, which is an example of the “Environment-Livings-Environment” relationship and an excellent patchwork of interconnected biological actions working toward human health.

Numerous epidemiological studies have shown that populations following the Mediterranean diet (MD) have a higher life expectancy and a reduced incidence of various chronic diseases, such as cardiovascular and neurodegenerative diseases, with respect to Northern Europe and the USA. It also appears that this food style is able to reduce the risk of developing various types of cancer and is beneficial in the course of autoimmune diseases. Referring to epigenetic influences, the hypothesis that the MD could act as an environmental protection for the consumer just as pregnancy does for the fetus is stimulating and likely.

Many studies suggest that the MD is able to protect against oxidative stress; in particular, it was demonstrated that a high adherence to the MD is positively correlated with the total antioxidant capacity of healthy subjects and patients.

Although a large emphasis has been given to the low production of cooking-related oxidants due to a high consumption of raw foods typical of the MD, the positive effects of this dietary pattern on redox homeostasis are mainly related to the high content of antioxidant molecules.

It must also be emphasized that, due their ability to influence cellular redox state, dietary antioxidants not only protect from oxidative stress phenomena but, through structural changes in redox-sensitive sites, in the cell can also modulate the function of numerous biological targets at key sites of signal transduction pathways or DNA integrity [1].

On the other hand, in some cases, regardless of the active redox properties, a direct interaction of those small bioactive molecules with the target in the cell may be sufficient to influence the function of that target. Among the large number of targets that a phytochemical can have in a cell, the interactions with DNA may be sufficient to influence its function with a lot of consequent actions and effects (Figure 1). 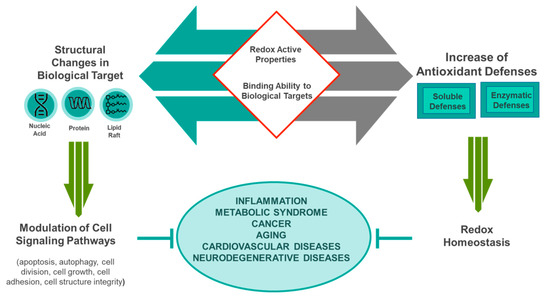 2. The Epigenomics of Mediterranean Nutrients

Several bioactive molecules have since long been described as actors of pleiotropic actions in many diets, including the MD. At the “cellular” level, among the targets of the action by dietary bioactive molecules, DNA and chromatin assume the role of metabolic sensors. In particular, recent data show that several dietary molecules can act as epigenetic modulators of (i) DNA methylation, (ii) histone acetylation/deacetylation, and (iii) small non-coding RNA action. Their ability to alter epigenetic patterns may depend on direct interaction with the enzymes responsible for adding or removing epigenetic marks or, indirectly, on the regulation of the expression of genes that encode proteins implicated in the epigenetic machinery. The fruit of the yellow cultivar Opuntia Ficus Indica, a typically two-seasonal MD fruit, deserves a separate discussion. It contains Indicaxanthin, a betalain that was described as a DNA methylation modulator at the genome and genic level. In Caco2 cells, in particular, this molecule is able to demethylate the genomic DNA and the promoter CpG islands of the P16INK4A gene, with the consequent reactivation of the expression of this oncosuppressor gene [2].

Many data suggest that bioactive food components and phytochemicals play a direct or indirect role in the modulation of miRNA expression, a new frontier in the understanding of tumorigenic mechanisms. In particular, in cancer it is possible to find some miRNAs that can act as onco-promoters and other ones that can act as onco-suppressors. Our lab is generating some initial but interesting data in this field using one of the protagonists of the MD: extra virgin olive oil (EVOO) with its peculiar polyphenolic content, 3-Hydroxytyrosol (HT). We are aiming to highlight those miRNAs that are differently regulated in a small cohort of 50 patients with breast cancer after they have introduced into their diet two kind of EVOO, enriched, respectively, by 250 and 25 parts per million HT. By using RNA sequencing and the Open array with Taqman chemistry, we are analyzing the expression of 20 circulating miRNAs in comparison with these specific food interventions. As a preliminary result, we found that the increase in the expression of the onco-suppressor miR 15 and miR 16 in oncological patients seems to have a positive dose-dependent relation to the HT amount, suggesting that this diet regimen may have beneficial health effects in patients; similarly, the onco-promoters miR21 and miR1274a showed a rationally coherent variation, presenting lower expression levels in the patients who had taken HT-enriched oil.

In general, for the definition of a precision nutrition it would be desirable that every individual were genotyped for all the related genes in order to establish an integrated individual gene profile useful to advise, by apposite softwares, the right diet even in relation to his/her age and particular physiological conditions, such as sport stress, pregnancy or others. In particular one wonders if the MD may be able to lower, over time, the consequences of some known risky genotypes.

Obesity is a worldwide social-economic problem and the MD is a potential collection of several food lifestyles against it. For these purposes, particularly interesting is the comparative analysis of three polymorphisms in FTO (rs1558902 and rs9939609) and TCF7L2 (rs7903146) genes, and their respective alleles, A and T. Extrapolating these results, we could hypothesize that individuals carrying the FTO AA genotype, if they live in the Mediterranean area and adopt the MD may show better results since the carriers of the FTO A allele are more prone to weight loss through a diet or lifestyle interventions. Another study seems to confirm this hypothesis. In fact, individuals with the so-called “minor” FTO alleles (rs9939973, rs8050136, rs1781749, and rs3751812), different from those previously-described, had lower risk of obesity adopting the MD as a food lifestyle. Moreover, the FTO polymorphism (rs9939609) is also studied in an interesting research addressing the very complex relation between i) maternal genotype, ii) mother diet during pregnancy and iii) newborn genotype for the onset of insulin resistance and cardio-vascular diseases. This study hypothesized that an high MD adherence during the pregnancy was able to counterbalance the potential negative effects on glucose homeostasis in neonates independently from both mother’s and their own genotypes. This suggests that adherence to a healthy diet, such as MD, can minimize the negative effects of a risky genotype although in a relatively short but important time such as pregnancy.

Inflammation of gut is a serious problem in contemporary world and the problematic consequences into the feeding are known. Inflammatory response genes, such as IL1B, IL6, IL8, IL10 and others, are involved in the triggering and maintenance of inflammation through both genetic and epigenetic mechanisms of action[3]. In particular, NLRP3 inflammasome activation and related IL1-β secretion is a very important endpoint in the inflammation-diet relationship. A potential differential effect of the inflammasome genetic variants in association to the MD has been reported as modulating the risk of Type 2 Diabetes (T2D). In particular, nondiabetic carriers with different NLRP3 genotypes (ref. rs4612666 and rs10733113) differentially changed insulin sensitivity index after 3 years of MD consumption.

A further gene that could be important to correlate with the MD is, in our opinion, CYP2E1. Previous published data of our lab demonstrated that certain CYP2E1 VNTR genotypes (e.g. the A1/A1) might have a protective role against drinking- and/or smoking-related cancers [4] and these data candidate the CYP2E1 gene to be one of the probable advantageous diet-independent genetic actors promoting the known low cancer rate in the Mediterranean areal. Moreover, since some polymorphic alleles of this gene have been described as implicated in the metabolism of acrylamide, a contaminant with genotoxic properties [5] surprisingly discovered in breadsticks and other Mediterranean typical foodstuff, an allelic discrimination of CYP2E1 is legitimate and desirable especially regarding the induced hepatotoxicity[6]. Lastly, in more recent times it has been given the statistical evidence that CYP2E1 genotypes, when put in relationship with red meat intake, may give high susceptibility to colorectal cancer risk in East Asians. It is worth remembering that both red meat and wine were, in ancient MD tradition, two non-predominant components but today, contrarily, their use is increasing and red meat in particular, is consumed not only as part of the principal meals but also in snacks or in bakery products.

The traditional MD is  one of the examples of the “Environment-Livings-Environment” relationship and, at the biomolecular level, is like a patchwork (Figure 2) in which biological and non-biological disciplines are interconnected in a network promoting human health. 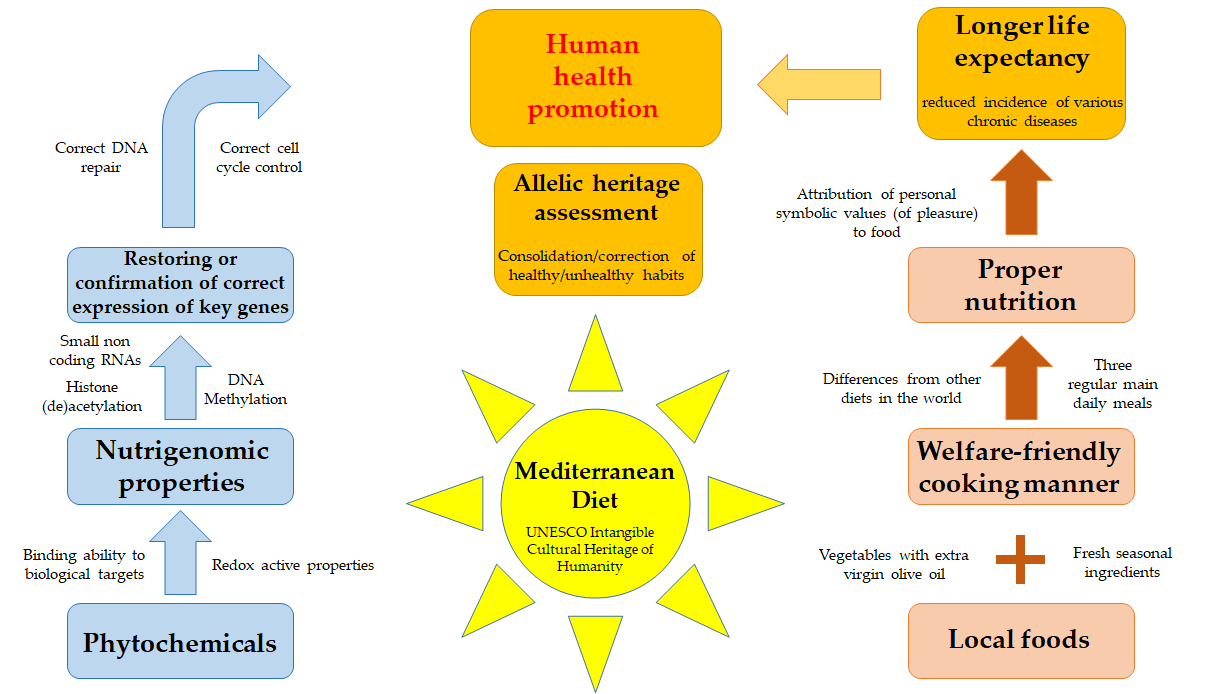 Figure 2. Patchwork expressing the “whole” concept of MD healthy properties. The left block of the diagram shows peculiar biological flowcharts; the right one displays selected non-biological points. The MD, interconnecting with both the blocks and taking advantage from allelic assessment, represents a network promoting human health.