Lactoferrins are an iron-binding glycoprotein that have important protective roles in the mammalian body through their numerous functions, which include antimicrobial, antitumor, anti-inflammatory, immunomodulatory, and antioxidant activities. Among these, their antimicrobial activity has been the most studied, although the mechanism behind antimicrobial activities remains to be elucidated.

Lactoferrins are iron-binding proteins that belong to the transferrin family. Since the first isolation of lactoferrins from both bovine [1] and human [2][3] milk in 1960, they have been the subject of intensive structural and functional studies, especially because of their numerous functions, properties, and applications in the food and pharmaceutical industries. Lactoferrins have also been identified in other mammalian species, as listed in Table 1 ; however, bovine and human lactoferrins have been the most studied to date.

Table 1. Mammalian species from where lactoferrins have been identified and isolated.

Numerous functions have been attributed to lactoferrins, which have ranged from antimicrobial (i.e., antibacterial, antivirus, antifungal, and antiparasitic) to antitumor, anti-inflammatory, immunomodulatory, and antioxidant activities.

Antibacterial activity was the first of these to be ascribed to lactoferrins, which have been well studied [14][15][16], since they represent a great potential as a natural defense agent. Lactoferrin and lactoferrin-derived peptides not only have a broad specter of antibacterial activities against Gram-positive and Gram-negative bacteria and can be potentially used as natural antibiotic in human and veterinary medicine [14] but also have a broad spectrum of activities against enveloped and naked viruses [17][18][19], fungi, yeast [20][21], and parasites [21]. Furthermore, lactoferrin has also been proposed to be potent as a treatment drug in the current COVID-19 pandemic caused by severe acute respiratory syndrome coronavirus 2 (SARS-CoV 2) [22][23][24][25][26]. The antimicrobial activity of lactoferrin is related to its ability to chelate iron and thus to deprive microorganisms of these important nutrient, although lactoferrin also expresses antimicrobial activity in the iron-independent pathway by direct interaction with microorganisms.

As lactoferrins were shown to be in body fluids that usually interact with the surrounding environment and considering their broad activity against different microbes, it is initially believed that lactoferrins have an important role in the initiation of the immune system.

Arnold et al. (1982) showed that the preincubation of S. mutans with human lactoferrin reduced glucose uptake and inhibited the synthesis of lactic acid, which indicated that lactoferrins can also affect glucose metabolism [30]. Furthermore, synergistic actions of lactoferrins with lysozymes (the major enzymatic components in the granules of polymorphonuclear lymphocytes) [31], bacteriophages [32], and antibiotics against different bacteria have been demonstrated [33]. By releasing LPS from the Gram-negative bacteria outer membrane, lactoferrins increase the permeability of the outer bacterial membrane and the susceptibility of Gram-negative bacteria to lysozymes, which have an important role in mammal defense mechanisms [31]. 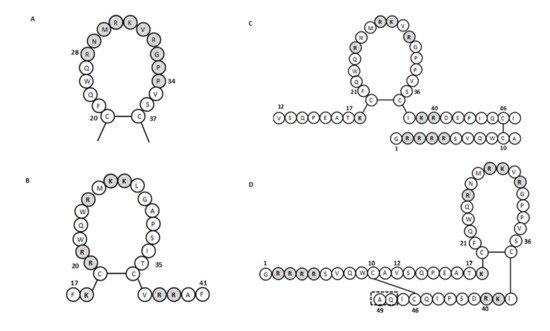 Antifungal activity for human lactoferrin was first reported by Kirkpatrick et al. (1971), where inhibition of growth was demonstrated against the yeast Candida albicans [39]. Human lactoferrin also inhibited the growth of Candida krusei , to a greater extent than seen for C. albicans . The inhibition of each of these was dose dependent [40][41], while iron saturation resulted in the loss of this antifungal activity of human lactoferrin [39][40][41]. Soon after the first isolation of bovine lactoferricin, its antifungal activity was extensively studied ( Supplementary Table S1 ), including for fungi that cause dermatophytosis. Using [14C]-labeled bovine lactoferricin, its direct binding was shown [42], along with its potent disruptive effects on C. albicans cell membranes [43]. Furthermore, for pathogenic fungi, bovine lactoferricin inhibited the uptake of [3H]-glucose in Trichophyton rubrum and caused substantial changes to the ultrastructure of Trichophyton mentagrophytes , which included dense aggregation of the cytoplasmic materials [44]. The anti- Candida activity of bovine and human lactoferricins can be affected by different pHs, temperatures, and ions (i.e., phosphate, bicarbonate, Ca 2+ , and Mg 2+ ) [41][42]. Indeed, bovine lactoferricin binding to C. albicans was reduced by the addition of the divalent cations Ca 2+ and Mg 2+ ,and was pH dependent, as also seen for its antimicrobial activity [42].

Some protozoan parasites such as Trichomonas, Giardia, and Entamoeba require a high extracellular iron concentration for their growth [60][61] and have therefore adapted to acquire extracellular iron from other sources such as host iron-binding proteins such as transferrin and lactoferin. It is well known that Trypanosoma brucei can sequestrate iron from transferrin by binding through a surface receptor [62]. Iron uptake from transferrin and lactoferrin has also been demonstrated for Trichomonas vaginalis [61] , Trichomonas foetus [63], and Leishmania chagasi [64]; however, in the last case, other possible mechanism of iron sequestrating have been proposed [65]. Binding sites for lactoferrin has also been demonstrated in T. brucei [66] and Toxoplasma gondii [67][68][69]; however, in T. gondii, binding sites were specific for lactoferrin since the absence of transferrin binding was observed [69]. It is possible that protozoa binding sites for lactoferrin could have roles in iron acquisition; however, this is yet unclear since iron saturation had no impact on binding pattern [66][67]. Furthermore, studies by Tanaka et al. and Dzitoko et al. showed that lactoferrins did not prevent parasite penetration into host cell or had direct cytotoxic impact on T. gondii viability [70][71][72]; however, the inhibition of protozoa multiplication by lactoferrin was demonstrated [72]. Furthermore, when the lactoferrin-derived peptide lactoferricin was applied, a reduced viability, cyst formation in mouse brains, infectivity of sporozoites, and decreased penetration activity by T. gondii was observed [70][73][74]. Reduced infectivity of sporozoites was also observed in a case of Eimeria stiedai [74].