Among transition metal nanoparticles, palladium nanoparticles (PdNPs) are recognized for their high catalytic activity in a wide range of organic transformations that are of academic and industrial importance. The increased interest in environmental issues has led to the development of various green approaches for the preparation of efficient, low-cost and environmentally sustainable Pd-nanocatalysts.

Currently, growing environmental concern requires the development of green and environmentally sustainable strategies for the preparation of metal nanoparticles [1][2].

As is known, Pd catalysts play a key role in the chemical industry production of complex molecules such as fine chemicals and pharmaceuticals, and in recent year, much attention has been afforded in designing efficient, low-cost and environmentally sustainable PdNPs nanocatalysts via green methods.

The use of solvent-free conditions or alternative green solvents to classical organic solvents such as water, solvent derived from lignocellulosic biomass valorization (carbonates, esters, amides, alcohols) or from industrial waste (PolarClean) in combination with continuous flow technologies and an activation with microwave or ultrasound radiation, contributes to the achievement of low-cost and environmentally sustainable processes [3][4][5][6][7][8][9][10][11][12][13].

The synthetic applications of such synthesized Pd nanocatalyst in fundamental organic processes, mainly C-C coupling (such as Suzuki–Miyaura, Sonogashira, Heck–Mizoroki) and reductions, in environmentally safer reaction conditions is in  Figure 1. Particular attention will be paid to the recovery and reuse of the Pd nanocatalysts and to Pd leaching in solution. 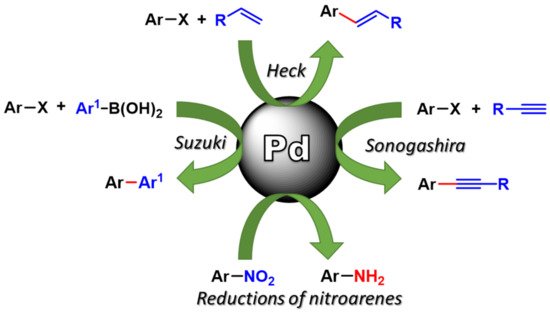 When considering the green synthesis of palladium nanoparticles by chemical reduction of the corresponding Pd(II) ion salt, there are three key factor to be considered: (i) the rection medium, (ii) the reducing agent and (iii) the stabilizer or dispersing agent.

Natural reducing agents from leaves, flowers, fruits, seeds, back and roots plant extract have been widely used for the green synthesis of Pd nanoparticles [32].

In 2018, Patil and co-workers reported the use of PdNPs@ Piper nigrum in the Hiyama reaction in ethylene glycol as a green solvent. The catalyst was recovered and reused for 11 cycles with only a slight decrease of catalytic performance (98→88% yield) [14].

In 2019, the aqueous extract of Artemisia abrotanum leaf was used by Yousefi and co-workers to produce PdNPs on the surface of reduced graphene oxide (rGO) [85]. Both the graphene oxide support and Pd(II) ions were reduced by an abrotanum leaf extract. The TEM image displayed that rGO are covered with a thin layer of biomolecules which increase the PdNPs dispersibility. The catalytic activity of PdNPs coated on modified rGO was tested in the Suzuki reaction in H2O/EtOH (1:1) at 50 °C, displaying excellent reaction performances for up to 9 cycles with negligible levels of Pd leaching.

Biopolymers such as polysaccharides (cellulose, chitosane, pectine, agarose, starch), lignin, gum, protein and DNA are promising materials as green supports for PdNPs because they are non-toxic, biodegradable, incur a low cost and are abundant in nature and also possess excellent mechanical properties and thermal stability, easing chemical modifications and having a high chelating capacity with metal ions [32,105,106].

In 2021, Mao and co-workers reported the use of nanocellulose, generated from waste cotton cloth, as a green support for the immobilization and stabilization of small sized PdNPs [15]. The Pd@NC NPs catalyst was generated in situ during the course of the Suzuki reaction in an aqueous medium in the absence of additional reagents. The catalyst showed excellent catalytic activity not only in the Suzuki reaction of aryl iodides and bromides but also with the least reactive aryl chlorides. After the reaction, the in situ generated catalyst was separated and reused for up to 11 cycles without the loss of catalytic activity. The high stability was also confirmed using a hot-filtration test and through an ICP-OES analysis; no leaching of Pd in the aqueous reaction medium was observed.

In 2020, Bai and Wang reported the preparation of bio-supported Pd nanoparticles where the powder of Clove leaves (RCL) was used as the support, reducing and stabilizing agents [16]. A high catalytic activity and a recyclability for up to 8 cycles has been observed in the Suzuki reaction in H2O/EtOH (1:1) at 60 °C with a 0.05 mol% Pd loading (TOF 5773.2 h−1). The pore structure and the oxygen-containing groups on the RCL greatly improve the stability and recyclability of the small-sized PdNPs and facilitates the mass transfer of the substrate, thus improving the catalytic activity.

Biopolymer functionalized Fe3O4 nanocomposite can assist in obtaining nanocatalysts with a high performance both in terms of catalytic activity and recyclability.

Between 2019 and 2020, Baran and co-workers synthesized various palladium nanocatalyst anchored on magnetically separable lignin-chitosan beads [146], chitosan/activated carbon microcapsules [147] and chitosan/agar microcapsules [148]. The catalytic activity has been evaluated on a microwave-assisted Suzuki coupling reaction under solvent free conditions. High performances have been observed for all palladium magnetic nanocatalysts, but the greatest results were obtained using PdNPs@CS-AC/Fe3O4 [147] where both chitosan and activated carbons with a high surface area and microporous structure provide the coordination sites for PdNPs. The Pd magnetic nanocatalyst retained its catalytic performance even after ten successive runs (99→95% yield) with only 0.5% Pd leaching. There was no change observed in surface morphology of microcapsules and the shape and size of PdNPs.

Recently, carbon quantum dots (CQD) have emerged as a green, non-toxic, abundant, and an inexpensive new class of carbon nanomaterials. The carboxylic and hydroxyl groups on the CQDs can act as a reducing and capping agent and confer high water solubility as well as biocompatibility, making it an excellent support for the immobilization of palladium nanoparticles [174].

Very recently, Pires and co-workers designed glycerol-based solvents such as glycerol ethers and glycerol-based deep eutectic solvents (DES) for the immobilization and stabilization of Pd nanoparticles in liquid phases (PdNPs/solvent) and as a reaction media for catalytic application [176,177].

Physical methods such as ultrasound, microwave and laser irradiation are considered to present promising green alternatives to produce PdNPs on the surface of solid supports [17].

A green synthesis of palladium NPs immobilized on zeolite-Y by ultrasound irradiation was reported by Tadjarodi in 2018 [18]. High catalytic activity was reported in the Suzuki coupling reaction in H2O/EtOH (1:1) with a very low Pd loading (0.02 mol%). Moreover, high yields were also obtained with less reactive aryl chlorides and a good yield (63%) was obtained with an inactive aryl fluoride. The catalyst was recycled for up to 10 runs without losing the catalytic activity.

In 2021, Tibbetts and co-workers reported the synthesis of uncapped PdNPs through a green procedure that involved a femtosecond laser photoreduction in water of precursor metal salts, such as K2PdCl4 and Pd(NO3)2 [19]. Laser reduction produced ultrasmall colloidal spherical Pd nanoparticles (3.1 ± 1.0 and 1.2 ± 0.3 nm using the chloride and nitrate precursors, respectively) and further, anisotropic large aggregates with nanopopcorn and nanoflower morphologies were observed. An exceptionally high level of catalytic activity was obtained in the Suzuki coupling reaction and a reduction of 4-nitrophenol but the colloidal PdNPs proved to be stable for at least a day, therefore, a deposition on solid supports is necessary for future applications.

In recent years, a growing interest in the development of green and environmentally sustainable procedures has affected all fields of chemistry. Considering the great potential of palladium nanoparticles across many applications, studies regarding their preparation in a sustainable way are constantly growing. The green production of Pd nanoparticles allows for the enhancement of their biological compatibility, the lowering of production costs and the reduction of physiological toxicity and environment pollution.

In this review, the solvent, the reducing agent, the capping and dispersing agent and the synthetic method were the main aspects considered for the synthesis of Pd nanoparticles in a green method.

The use of natural, abundant, easily available and low-cost bio-products as a reductant, stabilizer or support for the immobilization PdNPs certainly responds to the demand for an environmentally friendly and more sustainable synthetic process. Moreover, the use of alternative energy sources such as ultrasound and microwave irradiation are considered for a green perspective.

The catalytic activity, the recyclability and the robustness of the Pd-nanocatalyst obtained via a green route have been evaluated in sustainable C-C coupling reactions and the reduction of nitroarenes. Many Pd-nanocatalysts have presented excellent catalytic activity and recyclability with a very low Pd leaching in solution, promising applicable developments for sustainable and environmentally friendly industrial productions.