The FTO (FaT mass and Obesity-associated) protein is an alpha-ketoglutarate and iron dependent dioxygenase, a member of ALKBH family proteins. FTO removes the methyl groups from modified nucleotides on single stranded DNA or RNA with N6-methyladenozine in the mRNA removed most efficiently. It is engaged in wide range of key physiological processes such as adipogenesis, cell cycle progression, heart remodelling, neural development and osteogenesis. Impairments of FTO activity is lethal or leads to serious developmental disorders. It is also one of the factors responsible for development and maintenance of many type of cancers.

FTO acts in cooperation with other proteins e.g. CaMKII, MRS, SFPQ or XPO2. Similarly to other dioxygenases, it shows ability to form homodimer. Recently, it was shown that FTO interacts with the calmodulin (CaM) in Ca2+ dependent manner.

The FTO (FaT mass and Obesity-associated) protein is an alpha-ketoglutarate and iron-dependent dioxygenase [1]. This two-domain protein is responsible for the removal of methyl groups from certain types of RNA [2]. FTO has been shown to be able to demethylate N3-methyluridine from RNA oligomers [3], N6-methyladenosine (N6-meA) from mRNA and snRNA, N1-methyladenosine from tRNA [4], N6,2-O-dimethyladenosine from both snRNA [4] and, the most efficiently, from the mRNA cap [5]. Importantly, the substrate specificity of FTO may be dependent on its localization within the cell [4]. The cap demethylation takes place in the cytoplasm only, snRNA demethylation occurs exclusively in the nucleus while the removal of the methyl group from mRNA happens regardless of its location [4].
The cellular FTO localization depends on its interaction with other proteins. It has been shown that FTO molecules actively move between the nucleus and the cytoplasm. The phosphorylation state of FTO in the position T150, introduced by casein kinase II, determines FTO presence in a particular cell compartment [6]. Phosphorylation of T150 maintains cytoplasmic location of FTO, while non-phosphorylated molecules are directed to the nucleus. Exportin-2 (XPO2) is one of the proteins involved in FTO transport through recognition of the NLS sequence present at the start of the FTO N-domain [7].
In the last 10 years, a number of other interactions influencing FTO parameters and regulating its functions in the cell have been identified. Lin and colleagues [8] have shown that FTO can interact with three (α, β, and γ) out of the four isoforms of calcium/calmodulin-dependent protein kinase II (CaMKII) [9], the members of the serine/threonine kinase family. CaMKII kinases phosphorylate a wide range of different substrates influencing processes such as cell development, proliferation, cellular transport, neuronal function and regulation of liver glucose [10][11][12][13][14][15]. For example, the interaction between FTO and CaMKII isoforms decreased the level of cAMP response element-binding protein (CREB) phosphorylation in human neuroblastoma cells (SK-N-SH). Next, the phosphorylation status of CREB protein determined the expression of specific genes associated with regulatory elements CRE [16]. The observed phosphorylation increased the expression of Neuropeptide Y receptor type 1 (NPY1R) and brain-derived neurotrophic factor (BDNF) proteins, which are also related to appetite and energy homeostasis.
Another protein with confirmed FTO interaction is the splicing factor, proline- and glutamine-rich (SFPQ). This nuclear protein [17] has been classified as a transcriptional factor participating in several metabolic pathways, e.g., in RNA transport, apoptosis or RNA repair. Together with Non-POU domain-containing octamer-binding proteins (p54nrb) and Paraspeckle component 1 (PSPC1), it forms a multifunctional family of Drosophila behavior/human splicing (DBHS) proteins with a tendency to create homo- and heterodimers [17]. Song and colleagues [18] noted that there are many physiological pathways and pathological conditions with participation of FTO and SFPQ proteins. They found that SFPQ, the RNA-binding protein, interacts with the FTO C-domain [18] and, when RNA was inspected, both proteins were close to each other on the chain. Moreover, SFPQ protein recognizes the CUGUG sequence and promotes FTO-directed N6-meA demethylation close to the indicated sequence. It is likely that the regulation of N6-meA in physiological and pathological states depends on SFPQ-FTO interaction. Additionally, FTO interaction with methionyl-tRNA synthetase (MRS) links the protein with energy metabolism [19]. MRS is responsible for connection methionine with the corresponding t-RNA; thus, MRS-FTO interaction suggests FTO involvement in amino acid metabolism.
Phosphorylation of certain serines in FTO by Glycogen synthase kinase 3 (GSK-3) affects the lifetime of the protein by its further ubiquitination, resulting in proteolytic decomposition [20]. On the other hand, Tai and colleagues [21] have shown that threonine phosphorylation in FTO gives the opposite effect.
The above-mentioned reports suggest that FTO appears in a network of interactions with other cellular elements. Further, our analysis of protein lysates from head and neck cancer (HNSCC), with the use of size exclusion chromatography indicated that FTO was located in a wide spectrum of molecular fractions—from several tens to several hundred kDa. This confirmed the presence of a wide range of the possible FTO interactors and determined the goal of our present study. Initially, we checked whether potential FTO interactors involve proteins that are known to recognize specific amino acid sequences. The Calmodulin Target Database [22] enabled us to identify sequences from several species indicating that FTO C-domain potentially interacts with calmodulin (CaM), an important signaling protein. It consists of two globular lobes, N- and C-, each possessing two calcium-binding sites connected through a flexible linker [23]. We investigated the FTO–CaM relationship, because calmodulin is one of the major regulators of Ca2+-dependent signaling pathways in all eukaryotic cells. Its high conservation during evolution, broad spectrum of functions via interactions with several dozen of other proteins and the fact that its presence is crucial for many tested organisms [24] underscore the importance of the research into the interplay between CaM and its partners.

We have already shown that overexpression of the FTO protein occurs in head and neck cancer (HNSCC) and that FTO level was positively correlated with the tumor size, indicating the involvement of this protein in cancer metabolism [25]. This raises the question whether FTO interactions with various proteins, already reported for CaMKII [8], GSK-3 [20] or SFPQ [18], explain its engagement in the metabolic processes other than cancerogenesis, such as adipogenesis [4], osteogenesis [26] or neural development [27] in normal cells. To answer the question of whether regulation of FTOs occurs at the gene or protein level, it must be first determined if in vivo FTO exists as monomer, dimer or in protein complexes of higher molecular mass.
Here, size exclusion chromatography (SEC) was performed for the purified recombinant FTO obtained from the baculovirus expression system (BESFTO), as well as for samples from the HNSCC tissues and specific cell lines, both cancerous (HeLa and U87) and non-cancerous (HEK293). In the absence of other proteins, FTO (58 kDa) showed the ability to form dimers [28]. This form predominates in vitro outside the cell. There were no higher oligomeric forms of the protein, even at high concentrations of BESFTO, that were clearly visible in the Coommasie stained SDS-PAGE gel (Figure 1a). On the other hand, FTO derived from cellular lysates behaved differently. Western blot analysis of fractions eluted from the column showed that FTO appeared in almost all the fractions, suggesting that in cancer tissues and cancer cell lines the protein exists in highly diverse forms, ranging from monomers up to large complexes (Figure 1b–j). Interestingly, in human embryonic kidney cells (HEK293), under the tested conditions, FTO appeared rather as a mixture of dimers and predominating monomers. This behavior strongly suggests that FTO may interact with other proteins, which is clearly evidenced by changes in the elution profile. Moreover, the data obtained in the HEK293 cell line suggest that other proteins or small compounds may interfere with FTO homodimerization.

Figure 1. Analysis of cell lysates containing FTO with the use of gel filtration chromatography. Each panel shows FTO contents in particular fractions (4–11) after SEC of protein lysates. (a) recombinant BESFTO exists as the mixture of the monomeric and dimeric forms; (b–f) HNSCC samples where FTO is present also in high molecular weight fractions, corresponding to masses up to 650 kDa; (g,h) HeLa cell samples where FTO is present in different fractions depending on the samples; (i) U87 cell samples where FTO exist simultaneously in low and high molecular weight fractions; (j) HEK293 samples where FTO monomeric forms are dominant. The results were visualized by Coomassie staining (a) or Western blot analysis (b–j). Antibodies used in experiment were verified previously [25].

A model of the FTO–CaM complex based on the obtained results is presented on Figure 2a. The N-terminal pair of EF-hand motifs of CaM was found to interact efficiently with FTO, while the C-terminal was oriented unfavorably relative to FTO. In order to avoid the steric hindrances between the C-terminal CaM domain and FTO, various conformations of the CaM interdomain linker were tested, while keeping coordinates of the N-terminal pair of EF-hands fixed. The best model was obtained for the linker in a helical conformation, adopted from the holo form of CaM (1CLL), with the C-terminal domain of CaM remaining calcium free. This model is consistent with the experimental results indicating that the presence of calcium is crucial for interaction and that half of the calmodulin displays different properties than the other half. 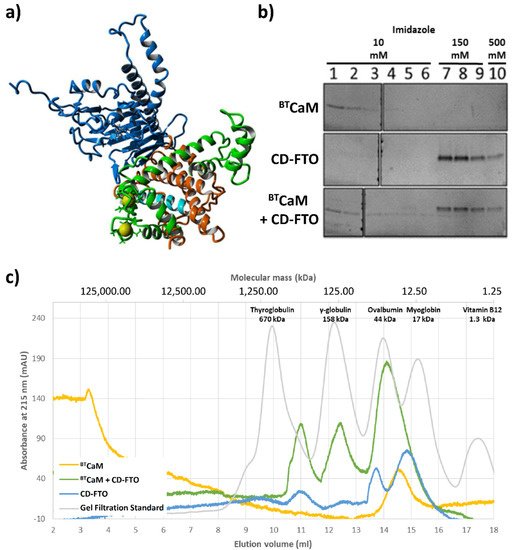 Figure 2. In silico and in vitro study of the interaction between CaM and C-domain of ECFTO (CD–FTO). (a) The model of the FTO–CaM–Ca2+ complex. Two calcium (yellow)-binding loops of the N-terminal part of CaM (green) are close to the CaM–biding region (cyan) located in the C-terminal domain (orange) of the FTO (blue). (b,c) Interaction between the ECFTO C–terminal domain with calmodulin. (b) Pull-down assay of BTCaM with the CD–FTO. CD–FTO was used as bait, with selected concentrations of imidazole: 10 mM, 150 mM, 0.5 M. Numbers indicate specific elution fraction in the presence of Fe2+, Ca2+, 2–OG. The presence of the CD–FTO protein in the incubation mixture delayed the elution of BTCaM. Elution experiments with BTCaM only or just CD–FTO were performed as controls. BTCaM alone did not interact with Ni+-resin. (c) Gel filtration chromatography of BTCaM (yellow), CD–FTO (blue) and their mixture (green) samples in the presence of 0.5 mM Mn2+, 0.5 mM Ca2+ and 1 mM 2–OG. The CD–FTO chromatogram shows the presence of two fractions corresponding to monomeric and dimeric state, as well as large unspecific aggregates. BTCaM is present only in one, low molecular mass form. The chromatography of the two protein mixtures reveals the presence of one significant peak corresponding to the expected mass of the CD–FTO–BTCaM complex.
After detailed investigation of CaM behavior in the presence of the FTO, we experimentally verified FTO C-domain interaction with calmodulin. First, the interaction between bovine testicle calmodulin (BTCaM) and FTO C-domain (hereafter called CD-FTO) expressed in the E. Coli system was tested by a pull-down assay where the presence of His-tagged CD-FTO delayed the removal of BTCaM from nickel beads (Figure 2b). Next, complex formation between these proteins was monitored by gel filtration (Figure 2c). The CD-FTO (22.2 kDa) elution profile showed three clearly visible peaks corresponding to large aggregates (at 11.0 mL), a homodimer (at 13.8 mL), and monomer (at 14.9 mL). BTCaM (17 kDa) was eluted as the singular peak at 14.5 mL. As indicated by its molecular mass, it should have eluted at 15.2 mL, similarly to the myoglobin, but because of its non-globular shape, BTCaM was eluted earlier. After gel filtration of the CD-FTO–BTCaM mixture, the elution profile showed three distinct peaks. The first likely corresponds to large aggregates (at 11.0 mL), it was also present in the CD-FTO elution profile. The second (at 12.4 mL) may result from the initial stages of protein aggregation. The CD-FTO–BTCaM mixture was eluted mainly as a peak at 14.1 mL, with the location corresponding to a putative heterodimer. The fact that this peak eluted between the two latter peaks of pure CD-FTO (13.8 mL for the homodimer and 14.9 mL for the monomer) is consistent with the lower molecular mass of BTCaM compared with CD-FTO (17 kDa vs. 22.2 kDa).

4. The importance of FTO-CaM interaction for metabolism