Small cell lung cancer (SCLC) remains a poorly understood disease with aggressive features, high relapse rates, and significant morbidity as well as mortality, yet persistently limited treatment options. On the other hand, immunotherapy has been a thriving concept that revolutionized treatment options in multiple malignancies, rendering previously untreatable diseases potentially curable. In extensive stage SCLC, immunotherapy significantly altered the course of disease and is now part of the treatment algorithm in the first-line setting. Nevertheless, the important questions that arise are how best to implement immunotherapy, who would benefit the most, and finally, how to enhance responses.

Lung cancer remains the leading cause of cancer death worldwide [1]. Major milestones have been achieved in non-small cell lung cancer immunotherapy and targeted treatment with significant improvement in responses, as well as survival; yet small cell lung cancer (SCLC) that accounts for 10–20% of all lung cancer cases staggers behind with therapeutic quiescence that strengthens its status as an aggressive malignancy with a five-year survival rate of around 7% [2]. High proliferative index, rapid doubling time, and strong propensity to metastasize all contribute to its dismal prognosis despite active treatment [3].

The veteran’s administration lung cancer study group categorizes SCLC into limited or extensive-stage disease according to whether the disease is limited to one hemithorax in a field amenable to radiation therapy (noting that TNM staging can also be used) [4]. Significant differences have been noted in the characteristics of limited versus extensive-stage disease and their response to different therapeutic approaches [5]. For the scope of this review, we will only be discussing extensive-stage SCLC (ES-SCLC).

Despite multiple therapeutic innovations in the field of ES-SCLC, platinum-etoposide (PE) chemotherapeutic protocol maintains its position as the mainstay first-line treatment of SCLC, as SCLC is quite chemotherapy-sensitive in the first-line setting [6]. However, quick emergence of resistance, transient benefit of therapy, and limited efficacy of subsequent lines [7] compel physicians and scientists to seek better treatment options.

It has always been hypothesized that SCLC is an immunologic disease. A strong correlation with cigarette smoking [8] implies a potentially high tumor mutational burden (TMB) as well as high neoantigen diversity [9]. Furthermore, the established occurrence of auto-immune paraneoplastic manifestations in SCLC, such as Lambert–Eaton myasthenic syndrome, sensory neuropathy, limbic encephalitis, and syndrome of inappropriate secretion of antidiuretic hormone, highlight the strong immunogenic feature of SCLC cells [10][11]. Unfortunately, SCLC initial studies have suggested only modest responses to single-agent immunotherapy, and classical predictive biomarkers of immunotherapy were not found to be of benefit for patients with ES-SCLC.

Nevertheless, two important phase III clinical trials, IMPower133 and CASPIAN, have now shown the significant role and benefit of the integration of immune check-point inhibitors in combination with front-line chemotherapy in the therapeutic algorithm of ES-SCLC, finally changing the treatment paradigm in this setting. More studies are needed to understand the difference in outcomes of patients with ES-SCLC receiving immunotherapy as well as find the proper biomarkers that can identify the patient subcategories that can derive the most benefit.

Whole genome sequencing and transcriptional profiling broadened our understanding of SCLC by recognizing specific patterns which may lead to more rationally designed therapies for SCLC (Figure 1) [12][13][14]. Loss of function mutations of retinoblastoma1 (Rb1) and TP53 are a ubiquitous finding in SCLC. Several other possibly targetable or non-targetable alterations such as MYC amplification, PTEN loss, PI3K activating mutation, and FGFR1 amplification are also common. DNA damage response (DDR) mediators altered in SCLC represent yet another aspect of understanding the landscape of SCLC biology. These include checkpoint kinase 1 (CHK1), ataxia telangiectasia and RAD3-related protein (ATR), ataxia telangiectasia mutated (ATM), aurora kinase (AURK) A or B, and WEE1. Epigenetic related alterations such as inhibition of enhancer of zeste homology 2 (EZH2) and variations in lysine-specific demethylase 1A (LSD1) were also noted to play a role in tumor immunogenicity as well as response to treatment, and they provide promising anti-tumor targets. Nevertheless, although biologically relevant, no actionable mutation has yet proven to be associated with therapeutic benefits in the clinic [14][15]. 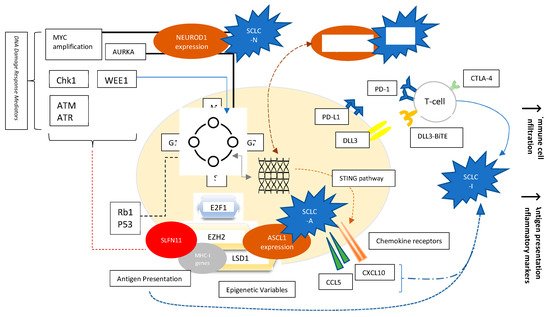 Figure 1. Factors affecting SCLC biology. Molecular Variables, Signaling Pathways, Transcription factors, Epigenetics, and Cell-surface Receptors. Evolving concepts in the understanding of SCLC include the following: The ubiquitous loss of TP53 and Rb1 involved mainly in the G1-S phase cellular cycle checkpoints; NEUROD1, ASCL1, and POUF2 expression as determinants of SCLC subtypes; Over-expression of AURKA involved in the G2-M checkpoint, and characterizing the MYC-driven NEUROD1 high SCLC-N subtype; Role of DNA damage response mediators such as Chk1, WEE1, ATM/ATR, as well as AURK; Role of epigenetics such as EZH2 and LSD1; Role of EZH2 influencing response to chemotherapy by alteration of SLFN11 and immune phenotype by effect on MHC-I presentation; Role of EZH2 in affecting ASCL1 expression responsible for SCLC-A phenotype through TGF-beta-SMAD pathway; Variable expression of chemokine receptors dependent on STING pathway; PD-L1 and DLL3 studied as targetable cell-surface receptors.

An important perspective-changing finding in SCLC has been the role of transcription factors in shaping tumor behavior and the characterization of variable biologic subtypes of SCLC. Key transcription factors such as ASCL1, NEUROD1, POU2F3, and YAP1 were found to be responsible for variable neuroendocrine differentiation patterns of SCLC, and investigators were able to recognize four major distinct subcategories using unbiased RNA-sequencing: SCLC-A, SCLC-P, SCLC-N, and finally SCLC-Y that was dropped in more recent classification studies as it was characterized by YAP1 expression, and YAP1 expression has been found to be rather nonspecific to one biologic sub-type. Recent studies have also pointed to the presence of an immune dependent subtype, referred as SCLC-I [16][17]. These subcategories were divided into those with (SCLC-A, SCLC-N) or without (SCLC-P, SCLC-I) neuro-endocrine differentiation. Distinct features and therapeutic vulnerabilities were noted in each sub-category [17][18]. (Table 1)

SCLC-A, characterized by high ASCL1 expression, was found to have high delta-like ligand-3 (DLL3) expression. Furthermore, the protein Schlafen 11 (SLFN11), recently found to be a promising predictor of sensitivity to DNA-damaging chemotherapy [19], is most differentially expressed in SCLC-A subtype. This renders SCLC-A subtype potentially more sensitive to DLL-3 inhibition as well more responsive to platinum therapy and PARP inhibition. It was also noted that SCLC-A has an increased susceptibility to BCL2 inhibition [17].

SCLC-P, accounting for 7% of SCLC cases [21], has high POU2F3 expression. It is associated with lack of DLL3 expression. However, it was found to be particularly vulnerable to PARP inhibition and antimetabolites [17].

SCLC-Y, initially found in 5–10% of SCLC tumors, more commonly in tumors of mixed histology previously characterized with high YAP1 expression, enriched RB wild-type status, and low or absent expression of ASCL1, and NEUROD1 [22], was considered to be of poor prognosis, with a tendency to chemoresistance. It was discussed to be more immunogenic and defined as a distinct T-cell inflamed phenotype [22]. Eventually, it was noted that YAP1 expression was not restricted to a specific phenotype and is usually expressed in rare cases across all SCLC subtypes [21], but rather another SCLC-I subtype with low expression of transcription factors and an inflamed gene signature could be identified [23].

In absence of definitive correlation of response to immunotherapy and conventional biomarkers, perhaps the identification of SCLC-I subtype will help us better predict the effectiveness of ICIs [24], as was discussed by Gay et al. during their retrospective review of IMpower 133 cases regarding SCLC subtypes [17], which will be discussed later in this review. Immunohistochemistry has been attempted for the easier and faster identification of subtypes [25]; however, it remains a gray zone with inadequate characterization.

Interesting enough, when investigating subtype variability, and significant tumor diversity as well as interpatient dynamic tumor heterogeneity that can be responsible for treatment resistance, as well as change into more pro-metastatic features, sample clustering and different signatures of cell line plasticity were noted [21]. Single-cell atlas of human small cell lung cancer assay studying transcriptional heterogeneity demonstrated the role of PLCG2 expression in substantial phenotypic changes in the SCLC immune micro-environment, with PLCG2-high tumors having a more profoundly immuno-suppressed microenvironment and being more prone to metastasis [20]. Further genetic scrutiny in mouse models regarding key features of phenotypic switch in SCLC variants led to the discovery of the role of TAZ or transcriptional coactivator with PDZ-binding motif as an important downstream mediator of SWI/SNF complex responsible for morphologic and phenotypic behavior of SCLC cell lines [26]. The discovery of these possibly targetable genetic/epigenetic alterations responsible for phenotypic switching and consequently therapeutic resistance signals possible means to bypass SCLC treatment resistance leading to potential enhancement of treatment responses via synergistic combinations.

3. Role of Immunotherapy in SCLC

SCLC is an aggressive disease with high potential for metastasis, and for more than three decades, treatment of ES-SCLC remained platinum-based chemotherapy, despite high rates of treatment resistance and disease recurrence. Multiple therapeutic approaches have been attempted with no success in the past, until the advent of immunotherapy. Considering the aggressivity of the disease and the expectation that chemotherapy induction is still required for these patients, no study included immunotherapy as a single-agent approach in the first-line setting. Two mature large phase III clinical trials are now published and have led to a long-awaited shift in the treatment paradigm improving disease responses as well as patient outcomes. IMpower 133 [27] and CASPIAN [28] have demonstrated substantial evidence of benefit from adding atezolizumab and durvalumab respectively to chemotherapy, leading to the approval of these check point inhibitors (CPIs) in the frontline setting of ES-SCLC. Nevertheless, the absolute benefit of programmed death ligand 1 (PD-L1) inhibitors in SCLC is more modest than for NSCLC highlighting the need for a better understanding of the SCLC phenotypes and immune signatures that may offer a more rational approach to patient selection.