Different types of ceramics and glass have been extensively investigated due to their application in brachytherapy, radiotherapy, nuclear medicine diagnosis, radioisotope power systems, radiation processing of food, geological and archaeological dating methods. The comparison of the physico-chemical properties shows that glassy materials could be a promising alternative for dosimetry purposes.

Thermoluminescent dosimetry is a science which deals with measuring doses of ionizing radiation with the use of TL detectors. Thermoluminescence (TL) dosimetric studies have significant impact on many fields useful in ordinary life such as: radiotherapy [1], nuclear medicine diagnosis [2], radioisotope power systems [3], radiation processing of food [4], geological and archaeological dating methods [5][6], radiation shielding materials [7][8]. Due to the increasing use of ionizing radiation in technology, it seems that we must search for better materials suitable for radiation shielding. The amorphous structure of the glass, which is characterized by exceptional chemical resistance, seems to be ideal for this type of application. Moreover, the thermoluminescent materials are used in measurements of terrestrial and cosmic radiation [9] or radionuclide sources [10]. The phenomenon of thermoluminescence depends on the light emission as a result of heating a sample that was previously exposed to ionizing radiation. The luminescence mechanism in this case can be considered as phosphorescence caused by increasing temperature. The light emission can be observed directly during the first heating process. Luminescence can also be observed again after radiation exposure of a specific wavelength. The phenomenon of thermoluminescence occurs mainly in dielectrics [11] but also in organic materials [12]. The thermoluminescence effect was firstly observed and described in 1663 by the English physicist Robert Boyle [13]. Thermoluminescence was acknowledged in a diamond which had been heated to the temperature of the human body. Then, in 1904 Maria Skłodowska-Curie observed temperature-stimulated luminescence in fluorite (CaF2) [14]. She noticed the relationship between the exposure of natural calcium fluoride to radium radiation and the intensity of its light emission. The practical application of the thermoluminescence phenomenon in dosimetry was not developed until the end of the first half of the twentieth century, when the Randall-Wilkins theory was formulated [15]. Since the discovery of the phenomenon of thermoluminescence, many monographs and review articles containing the physical basis of this phenomenon have been published. The books “Thermoluminescence and Thermoluminescent Dosimetry”, by Yigal S. Horowitz [16] and “Thermoluminescence of solids” by S.W.S. McKeever [17], are worth mentioning. In addition, many summary reviews have been written on this subject, such as: “Thermoluminescence dosimetry and its applications in medicine” by T. Kron [18], “Thermoluminescence and its Applications: A Review” by K.V.R. Murthy [19] or “Versatility of thermoluminescence materials and radiation dosimetry—A review” by A. Duragkar [20]. The purpose of the following review article is to summarize the knowledge of the thermoluminescent properties of glassy and glass-crystalline materials.
The vast majority of the analytical methods applied in the glow-curve analysis are based on one recombination and one trapping level. Unfortunately, there is no ideal TL material which can be thoroughly specified by this model. Given the degree of defect centers and arrangement complexity in glassy networks, it is an extremely difficult case to understand the physical principles of thermoluminescent phenomena for amorphous systems. Therefore, the calculated values of activation energy EA and frequency factors f are, in fact, effective values. The glow curve shape depends on several factors, such as: the TL material composition, kind of dopants, types of defect centers induced by irradiation, the type of ionizing radiation and its dose level. The shape of the TL glow-curve for glassy samples might be explained by the presence of multiple trapping points which increase the probability of re-trapping mechanism. It is widely understood that the shape factor of a standard first order peak is about equal to 0.42 [21]. Simultaneously, when the value of shape factor is greater than 0.52, we are dealing with second order kinetics mechanism, respectively. Moreover, it has been demonstrated that the various heating rates can affect on TL glow-curve shape along with different values of trapping parameters [22]. In general, with the increasing heating rate, the TL peak temperature shifts to higher temperatures region. The increase in the intensity of thermoluminescence signal with respect to a radiation dose is caused by increasing number of excited electrons. The standard shape and position of glow TL peaks can be changed in respect to location of trapping levels in the glassy network [23]. Primarily, when the shape of the glow curve is asymmetric, wider at the low temperature region than at the high temperature region, then the kinetic process of thermoluminescence is attributed to the first order [24]. It can be equivocally expressed as no re-trapping luminescence process during which all the charge carriers freed from the trap centers follow directly to the recombination points. The thermally stimulated luminescence (TL) can be used to determine the optic properties of the glasses under study with radiation doses [25].
The process of irradiation might induce the displacement of atoms or electron defects which include the changes in the valence state of network atoms, modifier, or impurity atoms. Moreover, the changes in the glow curve shape can be used to deduce the damage created by the high radiation to the thermoluminescent material [26]. The extent of disordering in glass network can be deduced from Urbach energy (Urbach tail) which described the localized states present in the bandgap [27]. During irradiation, atoms are ionized as the bound electrons interact with high energy particles. This interaction leads to the generation of electron-hole pairs which got trapped at structure defects or glass impurities having energy states within the forbidden band. As a result of this ionization process, the electron-hole pairs in the glass structure are generated after exposing to ionizing radiation. In the case of borate and phosphate glasses, radiation defects are related mainly to the absence or excess of oxygen atoms in the amorphous glass structure [28][29][30]. For silicate, telluride or heavy metal fluoride glasses, radiation defects may be also color centers or structural vacancies [31][32]. Therefore, when heat or light stimulate the structure of the glass, the recombination of charges results in luminescence.

The thermoluminescent detector was used in ionizing radiation dosimetry for the first time during nuclear testing as part of the Manhattan Project in the United States since 1942 [33]. Nowadays, we are observing a tremendous progress in the thermoluminescence dosimetry from that moment [34][35][36][37]. The most commonly used material in TL detectors is crystalline lithium fluoride. There are a several types of detectors based on this compound: MCP detector (LiF doped Mg, Cu and P), MTS detector (LiF doped Mg and Ti) or MTT detector (LiF doped Mg and Ti with ten times more titanium and almost three times less magnesium in comparison with the MTS detector) [38]. The most important advantages of these detectors are high sensitivity and a cross-section for interaction with ionizing radiation which are similar to that of human tissues. Natural lithium contains 92.5% of the 7Li isotope and 7.5% of the 6Li isotope. The TL detectors also use lithium depleted or enriched in the 6Li isotope, which corresponds to three subtypes: MCP-N (natural abundance of lithium isotopes), MCP-6 (6Li-enriched) and MCP-7 (7Li-enriched) [39]. MTS-N detectors are characterized by a linear thermoluminescence response to approx. 1 Gy, and the reduction in the signal at room temperature is estimated at several percent per year. Moreover, they are characterized by good tissue similarity, therefore they are used in environmental and individual dosimetry. The MCP-N detector is characterized by thirty times greater sensitivity than the MTS-N detector and three times lower own background. This allows the measurement of radiation doses at the level of 200 nGy, which is a result 100 times lower in comparison with the MTS-N detector. The response of the MCP-N detector is linear up to a few Gy and has good stability over time. The spontaneous decrease in the stored radiation signal over time amounts to approx. 5% per year in the room temperature. The MTT-N detector is more efficient than the MTS-N detector, but its sensitivity is approximately 2.5 times lower. Therefore, the minimum measured dose is 1 mGy.
Fluorides and calcium sulphates doped Tm or Dy and Al2O3 doped carbon are also successfully used as thermoluminescent materials [40][41]. However, in practice, they are less often used items than crystalline doped LiF due to the different cross-section for interaction with radiation in comparison with human tissues. The most important technical parameters that prove the quality of thermoluminescent materials include: a wide range of energy of the measured doses, the linearity of the response to the radiation dose, potentially small geometric dimensions, the lack of need for power supply and chemical resistance to environmental factors. An undesirable feature of the thermoluminescent material is the high annealing temperature during the dose reading procedure. Thermoluminescent detectors are usually in the form of sintered bulk ceramics or powders. The most commonly used TL detectors are based on the doped: LiF, Al2O3, CaF2 and CaSO4 [40][41][42]. The comparison of the thermoluminescence glow curves for the same radiation dose for the crystalline TL materials is presented in the Figure 1. 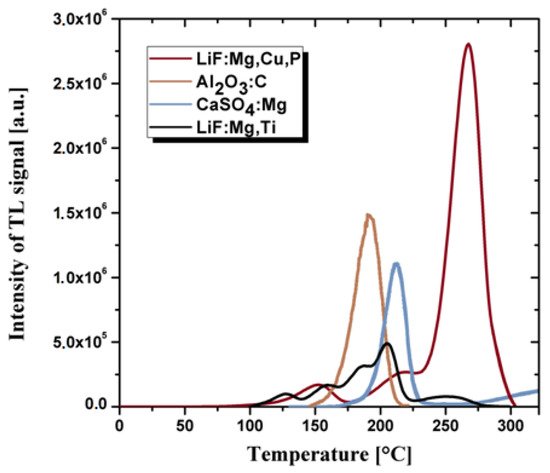 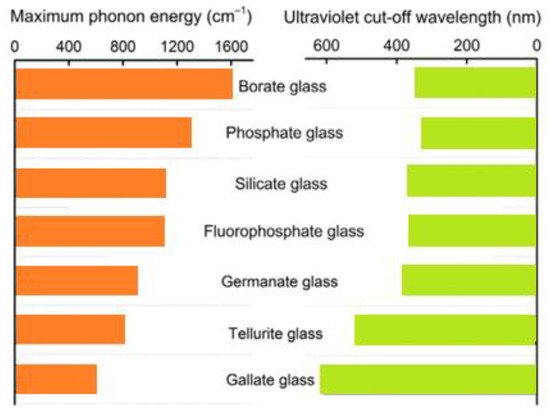