Poly(ionic liquide)s (PILs) can be used as solid polymer electrolytes because they have high thermal and electrochemical stabilities. This review is focused on the influence of macromolecular architecture on the ionic conductivity and electrochemical stability of PILs based electrolytes. Imidazolium based PILs are discussed as an example in the review. It is found that the electrolytes with a network structure exhibit better ionic conductivity and mechanical strength.

In recent years, the use of ionic liquid (IL) as the ion-conducting medium in lithium batteries has attracted further interest because of its salt solvating capacity, thermal and chemical stabilities. The commonly used cations and anions of ILs have been summarized in several reviews [1][2][3][4][5][6]. Polymeric ionic liquid, sometimes referred to as polymerized ionic liquid or poly(ionic liquid) (PIL), is a macromolecule with ionic liquid units that combines the advantages of ILs and mechanical strength of polymers. In previous years, many of the factors that affect the ion transport in PILs have been investigated. These include the nature of counter-ion [7][8], nature and length of spacer between the main chain and IL moieties [9], and polymer molecular weight [10]. This review is focused on the effects of PIL architecture on the ionic conductivity and electrochemical stability of PIL-based SPEs. Despite the variety of PILs, only imidazolium-based PILs, which are most frequently studied, are considered as an example.

Before the properties of PIL-based SPEs are discussed, the effects of architecture on the ion transport in pure PILs are briefly presented. For this type of polymer, IL units can be incorporated into the chain backbone or pendant; their position affects the properties of polymers. Kuray et al. recently investigated the morphology, conductivity, and rheology of imidazolium-based pendant and backbone PILs (P-PIL and B-PIL, respectively) [11]. Figure 1 shows the structure of PILs and their ionic conductivities as a function of temperature. The authors found that B-PILs have a considerably lower Tg than P-PILs with the same counter-anions and also exhibit a higher ionic conductivity on an absolute temperature scale. The conductivity of P-PILs is higher when scaled to Tg or below Tg. This is attributed to the movement of the counter-anions among the side chains in P-PILs (difference in the decoupling degree). Moreover, they found that the ion transport for B-PILs is linked to the segmental motions of polymer chains, whereas that for P-PILs is decoupled from the segmental dynamics at a temperature close to Tg. 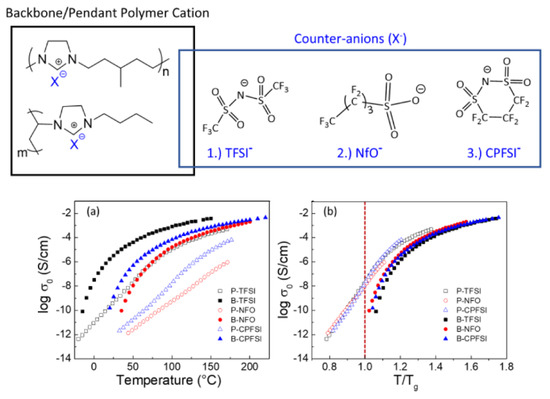 Delhorbe et al. systematically investigated the effect of the side alkyl chain length in the imidazolium-based P-PILs on the physicochemical properties and ionic conductivity based on 1-alkyl-3-vinylimidazolium bis(trifluoromethane)sulfonimide-derived homopolymers with various alkyl chain lengths (−C nH2n+1 (n = 2, 4, 6, 8, 10)) [12]. They revealed that the charge transport in PILs is determined by the segmental motion of the polymer backbone and charge carrier density as well as the self-assembly nanostructure of such PILs, specifically the backbone-to-backbone correlation distance. The low viscosity and Tg favor ion conduction, and the decrease in the backbone-to-backbone correlation distance enhances conductivity. On the other hand, in the presence of LiTFSI with a molar ratio of [Imidazolium+]:[Li+] = 3:1, they found that the ion transport in PILs also depends on the parameters described above. However, the authors have not identified the lithium cation transport in this system.

The membrane of most PILs is extremely brittle because of insufficient chain flexibility. As a result, the majority of PIL-based SPEs contain a liquid plasticizer, which also aids ion mobility. In a previous study of Hirano et al. [13], the SPE membranes are prepared with a PIL/IL/Li salt ternary system. Poly(1-ethyl-3-vinylimidazolium bis(trifluoromethanesulfonylimide)) (P(EtVIm-TFSI)) is used as the polymer host, and the mixture of 1,2-dimethyl-3-ethoxyethyl imidazolium bis(trifluoromethanesulfonyl) imide (IM(2o2)11TFSI) and LiTFSI is added as the liquid plasticizer. It is found that the ionic conductivity increases with the amount of IM(2o2)11TFSI. With a 65% ionic liquid content, the ionic conductivity reaches 1.89 × 10−5 S∙cm−1 at 25 °C and 1.84 × 10−4 S∙cm−1 at 60 °C; however, the mechanical resistance is compromised.

In comparison to linear PILs, the network structure has a higher charge density. Zhang et al. synthesized polymeric ionic networks (PINs) using hexakis(bromomethyl)benzene and 4,4-bipyridine by nucleophilic substitution reaction or a star-shaped imidazolium monomer by free radical polymerization [14]. In the PIN and LiTFSI mixture, it is possible that the crystalline structure of LiTFSI disappears because of the strong electrostatic interaction. Moreover, when the LiTFSI and PINs have the same anion, the LiTFSI ion pair configuration may be restructured. Using PINs as polymer hosts and LiTFSI in 1-ethyl-3-methylimidazolium bis(trifluoromethane)sulfonimide (EMIM-TFSI) (0.5 mol∙kg−1) as plasticizer, a six-arm imidazolium monomer-based network SPE exhibits the best ionic conductivity of up to 5.32 × 10−3 S∙cm−1 at 22 °C and good mechanical properties. Such a high ionic conductivity at room temperature is also observed in other PIL network-based SPEs [15][16]. These results indicate that the network affords higher charge density and better mechanical strength than a linear architecture that enhances the ionic conductivity of PIL-based SPEs.