Synthesis of Piperazines by C-H Functionalization

Piperazine ranks as the third most common nitrogen heterocycle in drug discovery, and it is the key component of several blockbuster drugs, such as Imatinib (also marketed as Gleevec) or Sildenafil, sold as Viagra.

Beyond doubt, nitrogen heterocycles constitute the most important structural motifs in medicinal chemistry and pharmaceuticals, making up more than 75% of FDA-approved drugs [1]. Among nitrogen heterocycles, piperazine ranks as the third most common nitrogen heterocycle in drug discovery, and it is prevalent in diverse pharmacological agents with anxiolytic, antiviral, cardioprotective, anticancer, and antidepressant properties. Moreover, it is the key component of several blockbuster drugs, such as Imatinib (also marketed as Gleevec), and Sildenafil, sold as Viagra (Figure 1) [1][2]. Structurally, piperazine is characterized by the 1,4-relationship of the two nitrogen atoms that comprise the six-membered ring. These two heteroatoms improve the pharmacological and pharmacokinetic profiles of drug candidates containing piperazines since the nitrogen atom sites serve as hydrogen bond donors/acceptors, thus tuning the interactions with receptors as well as increasing water solubility and bioavailability [3][4]. It is worthwhile to point out that the presence of the additional nitrogen permits for adjusting 3D geometry at the distal position of the six-membered ring, which is not easily available with morpholines or piperidines, the closest six-membered ring heterocyclic analogues of piperazines. In this context, the effect of the piperazine ring on bioactive compounds and drugs under the pharmacophore approach should also be mentioned. As such, it comes as no surprise that piperazine has been positioned as the privileged structure in the drug design of a plethora of biologically active compounds [3]. 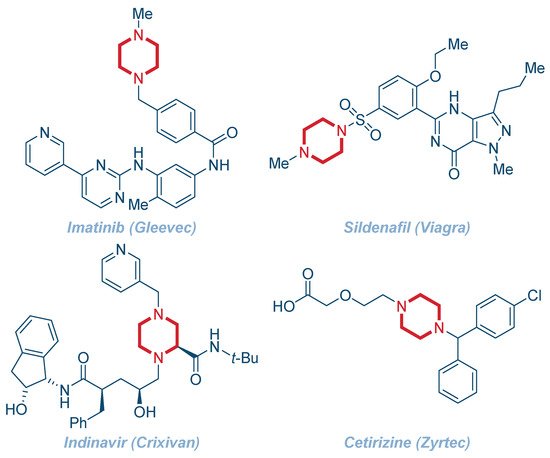 Figure 1. Blockbuster drugs that incorporate the piperazine ring.
Principally, piperazine derivatives are known for their broad therapeutic spectrum, including their antidepressant, anthelmintic, anticonvulsant, antihypertensive, antibacterial, antifungal, antipsychotic, anti-inflammatory, antimalarial, and anticancer properties or when used for the treatment of HIV [1][2][3][4][5]. In these cases, the biological properties of piperazines are ascribed to the presence of the additional nitrogen atom at the 4-position. However, approximately only 20% of piperazines currently utilized in medicinal chemistry research feature additional substituents on the carbon atoms of the piperazine ring [1][2][5]. Indeed, compared to the well-established substitution patterns at the N1-nitrogen, the lack of structural diversity at the carbon atoms hinders applications in medicinal chemistry and demonstrates the clear need for the development of new, efficient, and selective methods to access the carbon functionalization of the piperazine ring [6][7][8].
While traditional approaches used to introduce diverse substituents at the carbon atoms of piperazines are generally lengthy and limited by the availability of starting materials [4][5][6], recently, major advances have been made in the C–H functionalization of the carbon atoms of the piperazine ring. These approaches provide attractive new avenues for the synthesis of the defined substitution patterns of piperazines and expand the growing portfolio in the piperazine toolbox for broad applications in medicinal chemistry research. It is worthwhile to point out that the methods applied for the C–H functionalization of other heterocycles, such as pyrrolidines or piperidines, typically cannot be used for the functionalization of piperazines because of the existence of the second nitrogen atom in piperazines, which results in side reactions or inhibits the reactivity of the catalytic system [5].

Over the past few years, the interest in visible-light photoredox catalysis has risen dramatically as a mild and green alternative to classical methods [9][10][11]. The most common catalysts include transition metal complexes of iridium and ruthenium, and organic dyes. The fundamental principle relies on the conversion of visible light energy into chemical energy generating highly reactive intermediates in a controlled fashion, which can be exploited for the C–H functionalization of heterocycles [9][10][11].
In 2011, MacMillan and coworkers reported one of the earliest examples of photoredox catalysis for the synthesis of C–H functionalized piperazines (Scheme 1A) [12]. The photoredox-catalyzed C–H arylation of piperazines with 1,4-dicyanobenzene was discovered using high throughput technology, in which a pool of substrates was exposed to a series of photoredox catalysts. During optimization, commercially available Ir(ppy)3 gave the best results and was found to be a suitable photocatalyst. Mechanistic studies showed that this process proceeds via single-electron transfer. The authors proposed a mechanism involving the following steps (Scheme 1B): (1) upon excitation from the light source, IrIII(ppy)3 becomes a powerful reductant; (2) in the presence of 1,4-dicyanobenzene, IrIII(ppy)3 donates an electron forming the arene radical anion; (3) the resultant IrIV(ppy)3, a strong oxidant, undergoes a single electron transfer with piperazine generating an amino radical cation of the N-Ph (vs. N-Boc) nitrogen and regenerating IrIII(ppy)3; (4) the piperazine C–H bond adjacent to the nitrogen atom undergoes deprotonation upon treatment with NaOAc to afford α-amino radical; (5) a coupling between the arene radical anion and the α-amino radical generates the α-functionalized piperazine ring; and (6) rearomatization occurs by the elimination of the cyano group. This synthetic method provides a powerful entry to directly couple N-Boc piperazines with 1,4-dicyanobenzes to produce the corresponding α-aryl-substituted piperazines. 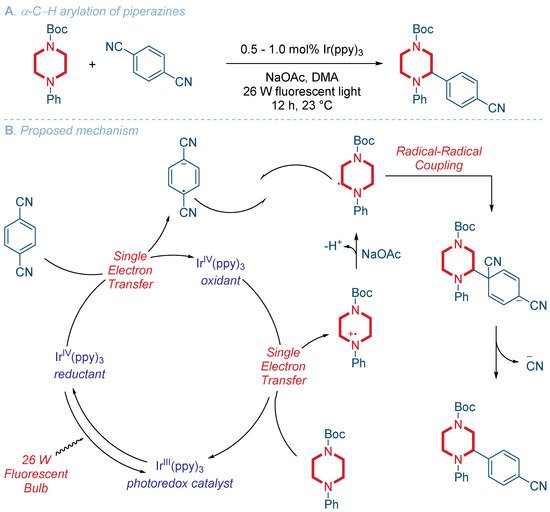 Scheme 1. Photoredox C–H arylation of piperazines.
To expand the utility of this methodology, MacMillan and coworkers set out to explore the application of this protocol to the direct C–H vinylation of piperazines (Scheme 2) [13]. Vinyl sulfones were identified as the alkene coupling partners of choice for this reaction because of their electron-deficient properties that facilitate the radical addition and promote β-elimination. Although the proposed vinylation reaction proved to work under the previously developed conditions, the efficiency of this protocol was further improved by changing the catalyst system to IrIII[dF(CF3)ppy]2(dtbbpy)PF6/CsOAc/DCE to provide the product with high E-selectivity. Using the identified reaction conditions, (E)-(2-(phenylsulfonyl)vinyl)benzene was combined with the N1-Ph/N2-Boc piperazine to afford the corresponding product with an E:Z ratio of 94:6. Mechanistically, the authors proposed that C–H vinylation proceeded through a similar radical coupling pathway as C–H arylation (Scheme 1B).

Scheme 2. Photoredox C–H vinylation of piperazines.
Based on their earlier work, MacMillan and coworkers reported the successful α-C–H heteroarylation of piperazines via a homolytic substitution pathway (Scheme 3A) [14]. In the previous protocols, functionalization was achieved using electron-deficient benzonitriles or vinyl sulfones as coupling partners. Mechanistically, this first reaction proceeded via a single electron transfer and radical-radical coupling, which generated an anion driving the reaction to completion. However, such transformation could be achieved by an alternative mechanism that would obviate the radical anion pathway. During the optimization of the α-heteroarylation reaction, IrIII(ppy)2(dtbbpy)PF6 was found suitable as a photocatalyst to oxidize the piperazine N-Ph atom via a single electron transfer. Mechanistically, the resulting amine radical cation is then deprotonated at the α-position of the nitrogen atom to give α-aminyl radical (Scheme 3B). The intermediate is then coupled to a heteroarene through homolytic aromatic substitution. This intermediate undergoes reduction with IrII(ppy)2(dtbbpy)PF6 via single electron transfer and the loss of chloride to afford the C–H heteroarylated product (Scheme 3B). This new mechanism permitted the utilization of a range of heteroarenes to achieve the direct α-C–H heteroarylation of piperazines. 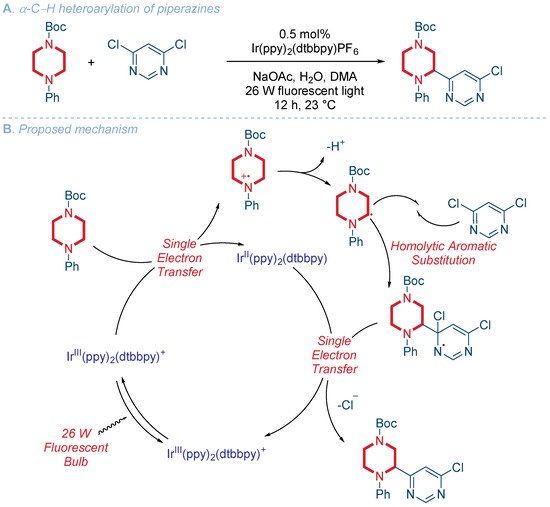 In an alternative mechanistic approach to the formal C–H functionalization of piperazines during their de novo synthesis, Bode and coworkers developed SnAP (stannyl amine protocol) chemistry as a convergent method for the synthesis of piperazines from aldehydes (Scheme 4A) [15][16][17][18][19][20]. This strategy relies on a facile radical generation from the stannane reagent to achieve the combined cyclization/C–C bond addition to imines [15][16]. The tin-substituted starting materials are readily synthesized from the corresponding diamines and tributyl(iodomethyl)stannane [15][16]. Mechanistically, the reaction is initiated by the copper-mediated oxidation of the C–Sn bond to form a heteroatom-stabilized α-aminyl radical, which then undergoes cyclization with the intermediate imine (Scheme 4B) [16][17]. This methodology delivers access to diverse piperazines with the functionalization at the carbon atom by a streamlined condensation of aldehydes and the SnAP reagent to generate the imines, which are cyclized with stochiometric amounts of copper at mild room temperature conditions. 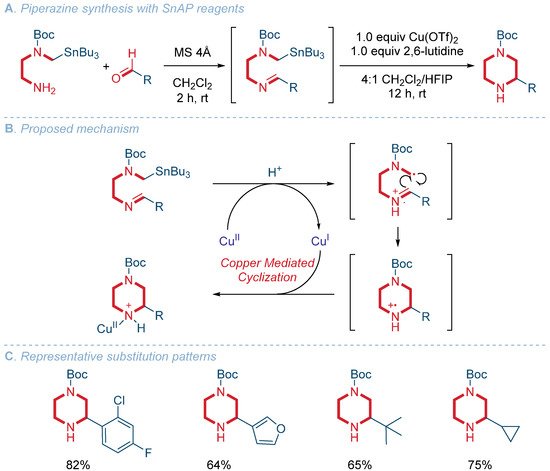 Scheme 4. Synthesis of C–H functionalized piperazines with SnAP reagents.
This SnAP chemistry developed by Bode and coworkers offers several major advantages in terms of ease of execution, functional group tolerance, and mild reaction conditions; however, the stochiometric use of copper decreases the efficiency of the reaction and limits its potential large-scale applications on the industrial level [15][16][17]. Thus, research led by Bode and coworkers identified the conditions at which the synthesis of piperazines proceeds under catalytic amounts of copper by changing the solvent from 4:1 CH2Cl2/HFIP to 4:1 HFIP/CH3CN (Scheme 5) [18]. Importantly, this improved procedure permitted the expansion of the substrate scope in the synthesis of piperazines to engage previously inaccessible heterocyclic aldehydes for the functionalization at the C2 position, thus leading to a facile synthesis of α-heteroarylated piperazines.