Epididymal Sperm of Canine and Feline

Epididymal spermatozoas  are often described as immature, immotile, and infertile sperm cells, yet the epididymis is the organ where spermatozoa mature, acquire motility, and become fully fertile. This coiled duct constitutes a reservoir for millions of spermatozoa before ejaculation.

Epididymal spermatozoa remain a kind of enigma. They are often described as immature, immotile, and infertile sperm cells, yet the epididymis is the organ where spermatozoa mature, acquire motility, and become fully fertile. This coiled duct constitutes a reservoir for millions of spermatozoa before ejaculation; therefore, the epididymis is a valuable source for spermatozoa in stud dogs or endangered canids and felids that die suddenly or need to be castrated. Semen donation and banking in pedigree dogs has become more and more important and can serve as a central tool to prevent inbreeding in certain dog breeds [1]. Moreover, in cats, a species notoriously difficult to collect semen from, epididymal sperm may serve as an extra and easily accessible source of gametes [2]. However, epididymal spermatozoa are different from ejaculated spermatozoa in certain morphological and functional characteristics. They differ in their maturation stages according to the part of the epididymis from which they have been collected. In other words, a sperm cell found in the caput of the epididymis possesses characteristics that are different from sperm cells found in the corpus or cauda of the same epididymis, such as the cytoplasmic droplet position. The droplet is located in the proximal region of the midpiece in a caput-spermatozoon and in the distal region of the midpiece in a corpus-spermatozoon [3]. As spermatozoa pass through the epididymis, they undergo a series of maturational changes, dependent on the different functions of each part of the epididymis. The functional dialogue between epididymal cells and spermatozoa, and subsequent modifications to the spermatozoa, mainly take place in the caput and corpus of the epididymis, whereas the main function of the cauda is to store spermatozoa [4]. A better understanding of the function of this organ and of the chronology of sperm maturation may elucidate the etiological background of many idiopathic subfertilities that are related to disorders in sperm maturation.

2. Morphological Changes in the Spermatozoa during Epididymal Transit

At the exit of the testis, spermatozoa are non-fertile, despite the fact that they are morphologically differentiated. In the initial segment of the epididymis, the sperm cell is immotile—unable to fertilize an oocyte and has a proximal cytoplasmic droplet—close to the neck [3]. As the spermatozoa move along the epididymis, changes in plasma membrane fluidity take place, as well as the acquisition of motility [5][6]. Morphologically, the most obvious change is the migration of the cytoplasmic droplet along the mid-piece to a distal position, resulting finally in detachment of the droplet; this occurs in the corpus, region 3, of the epididymis in dogs and at the transition between the caput and corpus in cats, region 4 [7]. In the cauda, the spermatozoa become motile and acquire a fertilization ability, while some of them still have a distal cytoplasmic droplet, near the annulus ( Figure 1 ). 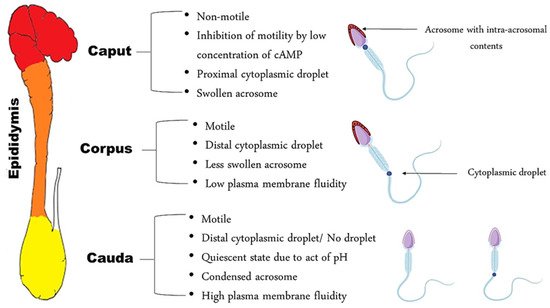 Figure 1. Schematic representation of spermatozoa characteristics in each epididymal segment.

There is a presupposition that sperm head morphology can reflect the status of sperm DNA since the latter occupies almost 90% of the spermatozoal head [8]. This was proved in bulls after using the Fourier harmonic analysis as an approach to correlate spermatozoa morphometry with sperm chromatin integrity [9]. Notably, in dogs, a significant relationship between sperm morphometry and chromatin integrity was present [8] in contrast to cats, where the sperm DNA fragmentation index was found to be independent from sperm head morphometry [10]. This may indicate that different factors other than chromatin compaction might affect the sperm head shape, especially since the sperm head is not solely composed of DNA. The acrosome, which plays a key role in fertilization, is located on the anterior part of the sperm nucleus. An important change necessary for capacitation is the condensation and contraction of the acrosomal cap during epididymal migration of the spermatozoon [3]. This reshaping is reflected by the enlarged acrosomal dimensions of spermatozoa present in the caput when compared to those in the cauda [11]; this has also been confirmed in dogs through the presence of a higher number of canine spermatozoa with swollen acrosomes in the caput and in the corpus, as compared to the cauda [3]. Concomitant to acrosomal reshaping, the acquisition of motility and reorganization of the composition of the plasma membrane occurs. Regarding motility, caput spermatozoa are nearly immotile in dogs [12] and cats [13]; they acquire motility gradually as they migrate caudally within the epididymis. Therefore, since AI and IVF require motile spermatozoa, sperm from both the corpus and cauda can be used. Caput spermatozoa can be extracted but are immotile and only useful for ICSI, especially in cats [13].

The unique features of the epididymal journey of the spermatozoa differ between species but have not yet been investigated in detail for several mammals. It is known that, in order to achieve fertilization competence, sperm cell modifications have to take place, such as cytoplasmic droplet migration , acrosomal cap condensation, changes in the composition of membranes, motility development, and the acquisition of fertility [5]. Several features of epididymal sperm maturation, which are either different ( Table 1 ) or common, ( Table 2 ) between dogs and cats are of utmost importance for developing precise protocols for semen evaluation features in epididymal sperm maturation, evaluation, and freezing, as well as for developing species-specific sperm fertility markers.

Despite the on-going dilemma regarding the definition of fertility, i.e., whether it is the ability to conceive or to produce offspring, a legitimate question remains: is epididymal semen fertile? In order to ascertain epididymal semen fertility, many studies have been conducted to examine the different parameters that are thought to affect fertility, such as morphology [21], motility [22], sperm chromatin integrity [10][23], and acrosome and plasma membrane integrity [3]. Among these parameters, sperm DNA integrity is of the utmost importance and can be used as a potential marker for fertility, more so than conventional semen parameters [23]. An intact spermatozoon exhibiting normal motility and morphology can carry damaged DNA that will affect embryonic development and subsequent pregnancy rates [20][24]. Sperm chromatin integrity is assessed by the DNA fragmentation index (DFI), which refers to the percentage of spermatozoa with damaged DNA or abnormal protamination [25]. A semen sample is considered of low quality when the DFI percentage is higher than its threshold. This subfertility marker is species specific. For instance, the DFI threshold percentage is 30% in humans [26], 6% in pigs, and 28% in stallions [25]. Little is known about this topic in dogs and cats, and the DFI threshold has not yet been determined. The DFI of sperm cells in ejaculated semen of fertile dogs was significantly lower when compared to subfertile dogs with mean values of 5.9% and 13.2%, respectively [27]. In cats, the DFI ranged from 2.4 to 5.7% in fresh epididymal semen [20] versus 21–31% in frozen–thawed epididymal semen [28] when using the same method of detection. This discrepancy can be linked to either the large individual variation in semen quality in felids [20] or to the fact that cryopreservation can induce DNA fragmentation [28]. Almost 80% of idiopathic cases of infertility are related to low DNA integrity. Extrinsic factors, such as management and processing factors (centrifugation, method of collection and cryopreservation, and different types of extenders), can also exert a negative influence on DNA integrity [25]. For instance, chilled canine ejaculated semen displays slightly higher levels of DFI when incubated for 10 days in an egg yolk-based extender compared to an egg yolk-free extender [23], whereas intrinsic factors are more related to spermatozoa with defective chromatin integrity, ROS generation, and abortive apoptosis [25]. When comparing applications of ART in domestic cats and dogs, it is obvious that the cat comes first in this area of research. Due to problems with canine oocyte maturation in vitro, canine IVF is still in its infancy, whereas feline IVF can be routinely applied [29].

To the best of our knowledge, no epididymal spermatozoa have been used yet for in vitro fertilization in dogs. Epididymal semen (from cauda) has been used with good results in canine AI.

In cats, many different methods of ART have been applied using epididymal feline semen (corpus and cauda) ( Table 3 ). Advances in feline AI and IVF are considered important since the domestic cat serves as a perfect model for more than 36 species of wild felids that are classified as endangered; this will enable scientists to use similar techniques in wild felids [34].