The low-frequency plasma-enhanced chemical vapor deposition in cyclohexane atmospheres is an easy-to-implement technology for carbon-based coatings deposition. LFPECVD (like RF PECVD), which has the capacity to be implemented in any scale, is widely used in industry.

Carbon-based films are innovative materials that have been merged as an alternative solution of silicon due to their electrical and mechanical properties [1][2]. Up to now, various production processes including wet and dry methods have been conducted for fabricating carbon-based films. Rathanasamy et al. grouped the most used fabrication techniques [3]. Carbon-based films are composed of structures ranging from hybridized sp 3 diamond to sp 2 bonded graphite. Among the different carbon-based films, Diamond-Like Carbon (DLC) coatings are widely used in various industries such as automotive [4], electronics [5], biomedical [6], and aerospace [7]. The name DLC refers to a large field of carbon-based materials with original properties, some of which even appear relatively far from that of diamonds. Two main characteristics allowing for the classification these different coatings are: the ratio of Csp 3/ Csp 2 carbon hybridizations and the hydrogen content in the layer. DLC deposited by Low-Frequency Plasma-Enhanced Chemical Vapor Deposition (LFPECVD) is classified in the category of films of hydrogenated amorphous carbon a-C:H.

The first study referring to DLC films dates back to 1953 [8]. The development of research and deposition of these films using different techniques increased in 1970s [9][10]. These coatings found their first application on magnetic recording media in the early 1980s [11]. The applications of DLC have been wide and varied since the 2000s. Among them, mechanical systems such as gears, ball bearings, protection of a large number of engine parts (diesel injection system, cam/pawls/tappet, pistons, .) [12][13], as well as cutting tools [14][15] have been reported.

In some mechanical parts of car engines, these coatings were first developed in racing, where they still occupy a central place, but they also often appear in standard vehicle parts [16]. In 2008, more than half of the injection systems and diesel pumps in the world had DLC-coated parts. They are also found on some extrusion molds or on solar cells as light-absorption films [17]. Besides, DLCs play a non-negligible role in the biomedical field, to increase the service life of orthopedic pins or screws, for example [18].

DLC is a metastable form of amorphous carbon with sp 2-bonded clusters interconnected by a random network of sp 3-bonded atomic sites [19]. It has a combination of properties: chemical inertness, low friction coefficient, high hardness, and good wear resistance. These properties are directly related to the hybridization state of carbon bonds and the hydrogen content.

The temperature of the gas of "cold" plasmas, such as low-pressure (alternative) self-sustaining discharges, is close to room temperature while the electrons have enough kinetic energy to allow the breaking of interatomic bonds as well as the ionization of atoms and/or molecules during electron-molecule collisions.

A classification of plasmas is made according to the value of the frequency f of the electrical excitation. On the one hand, there is the continuous discharge ( f is zero) and, on the other hand, the alternative discharges. If a plasma is subjected to a brief electrical disturbance, a momentary separation of charges appears, creating restoring forces which tend to bring it back to its equilibrium position. This phenomenon causes the oscillation of the charged species and in particular of the electrons which, being lighter, are the first to respond to the disturbance: in a plasma, the electrons and the ions oscillate respectively at characteristic frequencies called electronic (Fep) and ionic (Fip) plasma frequencies. Thus, the operation of the discharges in alternating mode depends on the value of the frequency f of the electrical excitation with respect to these two values of plasma frequencies Fep and Fip.

The low-frequency discharge (LF) corresponds to the case where f < Fip < Fep, Fip, and Fep are about 1 MHz and 1 GHz respectively. This defines a range of frequencies varying from a few hundred Hz to a few hundred kHz. In this type of discharge, ions and electrons instantly follow the variations of the electric field. The maintenance of the discharge is carried out by the emission of secondary electrons from the cathode.

The Radio-Frequency (RF) or high-frequencies (HF) discharge correspond to the case where Fip < f < Fep. This defines a range from about 1 MHz to around 100 MHz. The frequency commonly used in industry is 13.56 MHz, and it is set by international telecommunications regulations. At such frequencies, ions cannot follow the evolution of the applied electric field, unlike electrons which oscillate at the excitation frequency of the discharge. The ions are sensitive only to the time average value of the cladding field. However, it must be considered that Fip is inversely proportional to the mass of the ion. Thus, the "light" ions will be quite sensitive to the RF field while the "heavy" ions will be practically frozen. Such discharges require the use of an impedance adapter between the generator and the plasma. This adapter transmits maximum power to the discharge and protects the generator by reducing the impedance seen by it to 50 Ω, corresponding to the output impedance of an RF generator.

3. Examples of DLC Based Films Obtained by LFPECVD

Table 1 summarizes the main deposition parameters as well as the hardness, Young’s modulus, and residual stresses values of these four selected monolayers. The multilayer systems correspond to the association of a-C: H coating with one of the other three layers. These three configurations are interesting because they allow us to study different cases: an a-C:H/a-SiC:H a system for which the two elementary layers have similar hardness and Young’s modulus but different residual stress values, an a-C:H/a-SiC:H b system for which the two elementary layers have very different hardnesses, Young’s modulus and levels of residual stresses, an a-C: H/Si-DLC system for which the configuration is identical to that of the first stack, namely hardness and Young’s modulus similar for the two layers but with lower residual stress values for the Si-DLC layer. The difference arises, in this case, from the tribological properties of the Si-DLC layer (with R = 0.2), which are clearly superior to those of the two a-SiC:H layers.

Table 1. Deposition parameters and mechanical properties of the four elementary layers selected for the study of multilayer films.

Compressive residual stress was between −850 and −750 MPa for a-C: H/a-SiC:H a films, whereas it was between −600 and −500 MPa for a-C:H/a-SiC:H b coatings with different period thickness. For both a-C:H/a-SiC: H a and a-C:H/a-SiC:H b systems, whatever the thickness of the layers constituting the stacks, the values of the residual stresses of the multilayers ranged between those of two reference monolayers. It was the case for a period of 50 nm (Figure 1). 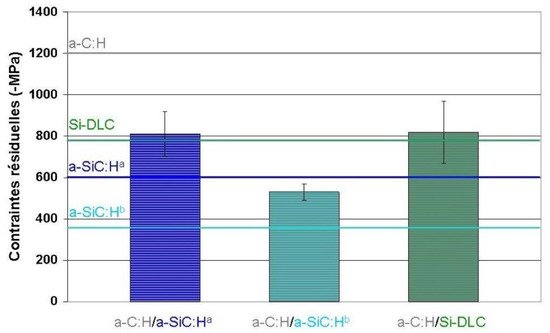 The hardness and Young’s modulus of a-C:H/a-SiC: H a and a-C:H/a-SiC: H b multilayer systems (Table 2) were measured as a function of the stacking period. The total thickness of these monolayer and multilayer films remained unchanged, about 2 µm.

Table 2. Hardness and Young’s modulus values of three multilayer stacks with a period of 50 nm as well as the values corresponding to the monolayer films.

In this section, only the tribological properties of a-C:H/a-SiC:H a multilayer system, with the highest hardness and Young’s modulus values, were reported as a function of the stacking period.