Neuroblastoma is one of the most common childhood solid tumors and develops from neural stem cells that normally comprise the embryonic structure termed the neural crest. Human neuroblastoma cell lines have special properties as they exhibit cell growth and are induced to become mature neurons by drugs such as retinoid.

Neuroblastoma is one of the most typical solid tumors among childhood cancers and exhibits a wide clinical range [1][2][3]. Patients can be broadly divided into three patterns (low-risk, medium-risk, and high-risk groups) from a biological and clinical point of view [1][2][3]. Although minimum treatment may be sufficient for low-risk patients, high risk patents have poor results in spite of aggressive treatment. Among several biological features, amplification of the MYCN gene is known to correlate with its prognosis and malignancy. In fact, approximately 20% of neuroblastomas have MYCN gene amplification. Recent studies showed that MYCN not only exhibits oncogenic activity, but also plays a role in the self-renewal of normal neural stem cells and progenitor cells [4][5][6][7].

Neuroblastoma is believed to be derived from the multipotent neural crest cells that make up the structure of the embryo [8]. The neural crest is composed of a cell population that produce cell lineage such as Schwann cell, melanocyte, smooth muscle, peripheral neurons, and glia [8]. Therefore, neuroblastoma cells are suspected to be similar in nature to cancer stem cells due to their pluripotent function.

As mentioned above, human neuroblastoma cell lines have special properties as they exhibit cell growth and are induced to become mature neurons by drugs such as retinoid [25]. In addition, neuroblastoma is a common childhood cancer that may develop at the fetal development stage when a large number of stem cells display ACD [26]. Therefore, we investigate ACD using human neuroblastoma cells as a model [27]. As a result, although the cell lines with MYCN amplification exhibited symmetric cell division (self-renewal division), the cell lines without MYCN amplification exhibited ACD ( Figure 1 ). In addition, comparison of ACD studies using these organisms and model systems demonstrated that ACD in neuroblastoma cells is evolutionarily conserved [27]. 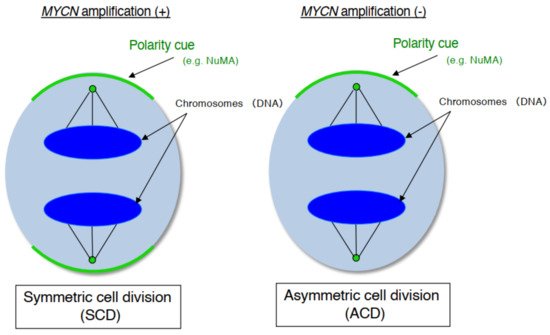 MYCN is a typical transcriptional factor that belongs to the MYC family (c-MYC, L-MYC) [28]. As mentioned above, recent studies have reported that MYCN not only exhibits oncogenic activity, but also plays a central role in the self-renewal of normal neural stem and progenitor cells [29].

In our experiments, the gene expression level of MYCN influenced the control of cell division fate. The overexpression of MYCN induced symmetric cell division (SCD) (self-renewal division), whereas decreased expression of MYCN caused ACD [27]. Moreover, when its leucine zipper domain was deleted, the MYCN mutant no longer induced self-renewal division. This suggested that the transcriptional activity of MYCN is necessary for inducing SCD in human neuroblastoma cells [27]. Although the specific transcriptional target(s) of MYCN currently remain unclear except for the high mobility group A1 (HMGA1) oncogene [30], several molecular pathways have been identified in MYCN-mediated cell division fate ( Figure 2 ) [26]. 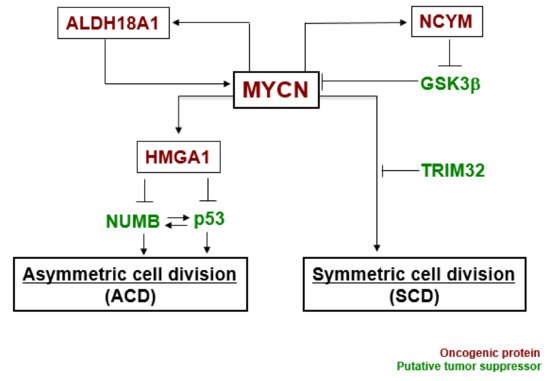 Based on the results of above previous studies, we searched for a molecule that degrades the MYCN protein and induces asymmetric division, focusing on TRIM32 (Tripartite motif-containing 32) by analogy. Previous studies reported that TRIM32 , an ortholog of Drosophila melanogaster , Brat , which controls ACD as a determinant of neuron, suppresses Drosophila MYC (dMYC) function in the neuroblasts of flies [38]. Moreover, mouse TRIM32 was reported to have ubiquitin ligase activity, and facilitated the degradation of the c-MYC oncoprotein during neurogenesis [39]. In neuroblastoma cells, TRIM32 associated with MYCN at the spindle pole during mitosis and facilitated the degradation of MYCN protein as an ubiquitin ligase [37]. In addition, when TRIM32 was overexpressed, ACD was detected in human neuroblastoma cells, as expected ( Figure 3 ) [37]. 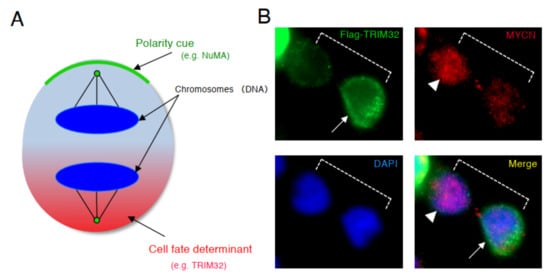