Electroencephalography (EEG) is a noninvasive, safe, and relatively convenient technique to record brain activities, which allows quantitative methods to detect changes and patterns of EEG signals related to DOC. The best feature of EEG data is neural oscillations. From the perspective of biophysics, EEGs are extracellular currents that reflect the total dendritic postsynaptic potentials in millions of parallel pyramidal cells.

Due to advances in critical care, an increasing number of patients survive acute brain injury, causing an increased incidence and prevalence of patients with disorders of consciousness (DOC). DOC encompasses coma, vegetative state (VS)/unresponsive wakefulness syndrome (UWS), and minimally conscious state (MCS). Patients with UWS have a sleep–wake cycle, but they completely lose their awareness of themselves and their surroundings [1], while patients with MCS have awareness and show purposeful behaviors but are unable to communicate effectively [2]. Recently, MCS has been further divided into two substates, MCS+ (high-level behavioral responses, such as command following) and MCS− (low-level behavioral responses, such as visual pursuit and pain localization) [3]. The gold standard Coma Recovery Scale-Revised (CRS-R) is the best behavioral assessment criterion for the diagnosis of UWS or MCS, but patients who are unable to follow the commands due to motor impairments may receive an incorrect diagnosis of UWS. Therefore, the misdiagnosis rate has been reported to be as high as 43% [4].

From a neurobiological viewpoint, consciousness and sleep are intimately linked [5]. Regular sleep patterns could reflect the preservation of brain functions [6] and play a key role in memory consolidation [7], hormonal regulation [8], and immune functions [9]. A better understanding of sleep-in patients with DOC could be of great help in distinguishing patients with different levels of consciousness. Subsequent findings further demonstrated that the integrity of identified sleep patterns carries important prognostic information for outcomes of consciousness recovery [10]. Consequently, the diagnostic and prognostic value of sleep in DOC has received increasing attention.

Neurophysiological changes in sleep have been well studied in healthy humans [11]. However, more detailed sleep assessment for DOC patients is still a controversial issue. Some research groups believe that manual sleep staging is feasible [12][13], while others [14] believe that it is impossible to perform sleep staging according to the established criteria of the American Academy of Sleep Medicine (AASM) or Rechtschaffen and Kales (R&K). Furthermore, the frequency, topography, power, and shape of EEG or PSG signals are changed in patients with severe brain injury. It is difficult to find polysomnographic patterns, such as sleep spindles, K-complex, and rapid eye movement.

2. An Overview of Sleep EEG in Patients with DOC

This entry was conducted according to PRISMA guidelines [15]. As shown in Figure 1 ,researchers searched the PubMed database using the concepts of sleep and DOC. Search words included ((disorders of consciousness) OR (DOC)) AND (sleep)), and the field search was (title/abstract). The number of journal papers found from 2002–2021 was 716. We emphasized the articles published in the last 20 years regarding the diagnosis and classification of DOC without language restrictions. Exclusion ( n = 649) were records not closely related to the classification, diagnosis, and prognosis of DOC, which mainly included the studies of the state of consciousness under sleep or anesthesia, the studies of sleep under different lifestyles, the studies of the clinical manifestations of patients with schizophrenia, Alzheimer’s disease, or other mental disorders using different drugs, and the studies involving other types of measurements, such as functional magnetic resonance imaging (fMRI), positron emission tomography (PET) or transcranial magnetic stimulation (TMS), or duplicates. The final result was that 36 articles were included. We focused on articles using sleep EEG or PSG methods, as well as studies on patients diagnosed with coma, VS/UWS, or MCS. We believe that it is a good time to summarize new technologies and address the gap between theory and application in this field.

PSG is the main tool to evaluate sleep in the laboratory and can be used for clinical and research purposes. PSG is used to collect EEG, EOG, EMG, electrocardiogram, pulse oximetry, airflow, and respiratory effort during sleep and utilize these to evaluate the underlying causes of sleep disturbances [17]. PSG can provide much information about the integrity of the global brain network; thus, sleep assessment can contribute to the diagnosis of DOC patients. During PSG monitoring, EEG and other sensors are used to divide sleep into several distinct stages. Sleep can be roughly divided into NREM sleep and REM sleep. The sleep stages cycles from NREM sleep stage 1 (N1) to REM sleep and then starts again from stage N1. A complete sleep cycle takes approximately 90 to 110 min, and each stage lasts 5 to 15 min. Figure 2 describes the distinct sleep stages of healthy subjects for more than 8 h. The sleep staging process can be very complicated. Many parameters of sleep staging need to be taken into consideration at the same time, and the contextual epoch scores also need to be considered. Compared with records from healthy subjects, scoring records from subjects with specific sleep disorders can be more challenging.

Sleep parameters such as sleep spindle, slow wave sleep, and rapid eye movement sleep can be used as independent markers of the severity of consciousness impairment. The purpose of sleep staging is to identify the stages of sleep that are crucial in the diagnosis and treatment of sleep disorders. The principle of sleep staging is to divide the night into continuous periods of 30 s, called epochs. Traditionally, doctors use these epochs to assess and analyze sleep patterns. However, the traditional manual sleep staging method is time-consuming and relies on the experience of doctors. Therefore, automatic sleep staging methods have become very important in recent years.

As shown in Figure 3 , subjects in MCS and Normal showed all stages of sleep in contrast to UWS patients. This indicates that the brain function of these patients has been fully protected [19]. MCS patients exhibit relatively preserved thalamocortical connectivity compared to UWS patients. Compared to MCS patients, the UWS patients did not show homoeostatic regulation, a detectable sleep cycle or slow wave activity. Since slow wave activity is considered to be related to plasticity [20], the better prognosis observed in the studies comparing patients with MCS to those with UWS can also be partially explained in their findings [21]. S. De Salvo et al. [22] proposed a system named Neurowave to monitor event-related potentials (ERPs) evoked by neurosensory stimulation in 11 VS and 5 MCS patients. The absence of an ERP component could be a distinctive marker between VS and MCS patients. The other differences in sleep elements between UWS and MCS patients are summarized in Table 1 . 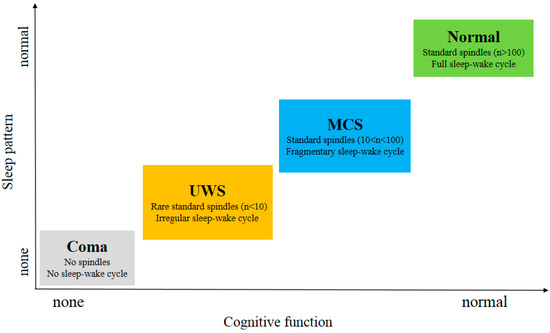