Interconnected sensing technology, such as IoT wearables and devices, present a promising solution for objective, reliable, and remote monitoring, assessment, and support through ambient assisted living.

In this light, the Internet of Things (IoT) is a promising solution to offer continuous, objective, and holistic monitoring, alleviating the burden of human caregiver effort and supporting clinical decision making. IoT is a generally new concept, providing the possibility of healthcare monitoring with the use of wearable devices. IoT can be defined as a network of physical objects with embedded technology for sensing, interacting with the environment, and offering autonomous communication. Wearable devices with sensors are a popular application of IoT that attracted much attention in the last decade, to the point of affordable fitness applications in the retail market. Such wristbands or smartwatches can monitor an individual’s activities through day and night, without much interruption and discomfort [6] The range of wearables is widening from watches to smart textiles, electronics in clothes, belt-worn PCs, and smart glasses. Analytics and artificial intelligence (AI) techniques are often coupled with wearables and IoT to extract intelligence, patterns, trends, user profiles, outliers for deeper assessment, and care [7].

As an emerging area of research, assistive technologies for elders present much room for a comprehensive, systematic review to identify current practices and future trends and opportunities. Current literature reviews have surveyed a limited number of papers and have yet to produce wider set of indexes, aspects, and features that such technologies offer for the care of dementia, as well as other elderly-associated ailments such as frailty and CVD [8].

A review of related review and case studies in the field is performed in [9]. Starting with the review/survey studies, Figure 1 presents graphically their health focus in categories. Alzheimer’s and dementia are the most reviewed, with eight studies each. Moreover, some of the studies reviewed combinations and not only a single health focus. Review studies referring to Alzheimer’s disease combine with Parkinson’s disease and dementia, while the latter combines with Alzheimer, cardiovascular diseases, and fall detection. Cardiovascular disease is the next most reviewed, with six studies (one of them combining with Fall Detection), and eldercare with five studies. Moreover, frailty and falls and Parkinson’s disease are represented in three studies each. 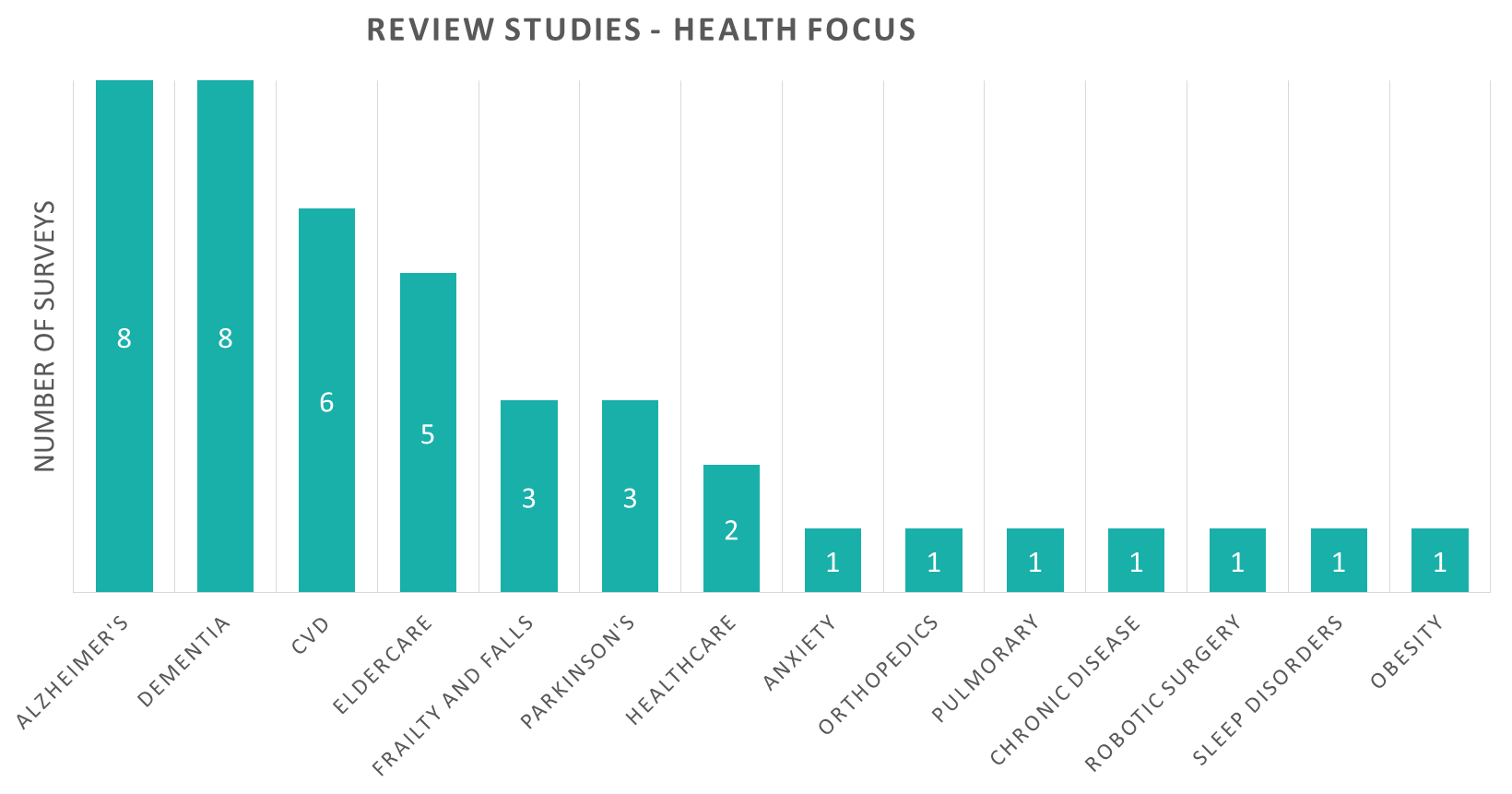 Figure 2. Review studies according to Internet of Things (IoT) technology devices are presented.

Overall, another classification extracted from all criteria examined in past review studies is shown on (Figure 3). Four larger categories can be discriminated: (1) criteria affecting the amount of impact in a patient’s health, which can be health focus, aims, system functionality for the patient, clinical validation, and evaluation outcomes; (2) acceptance and usability parameters, which include esthetics, ease of use, invasiveness, and size of the devices, as well the system’s user interface; (3) cost-effectiveness, which regards accuracy, energy consumption, efficacy, cost, and speed parameters (latency, bandwidth, and so on); and (4) infrastructure, related to security and transport protocols, data models and ontologies, computing capabilities, and network architecture. Categories of parameters affect one another, for example, more capable infrastructure relates to cost-effectiveness or more acceptance and usability owing to decreased delay. 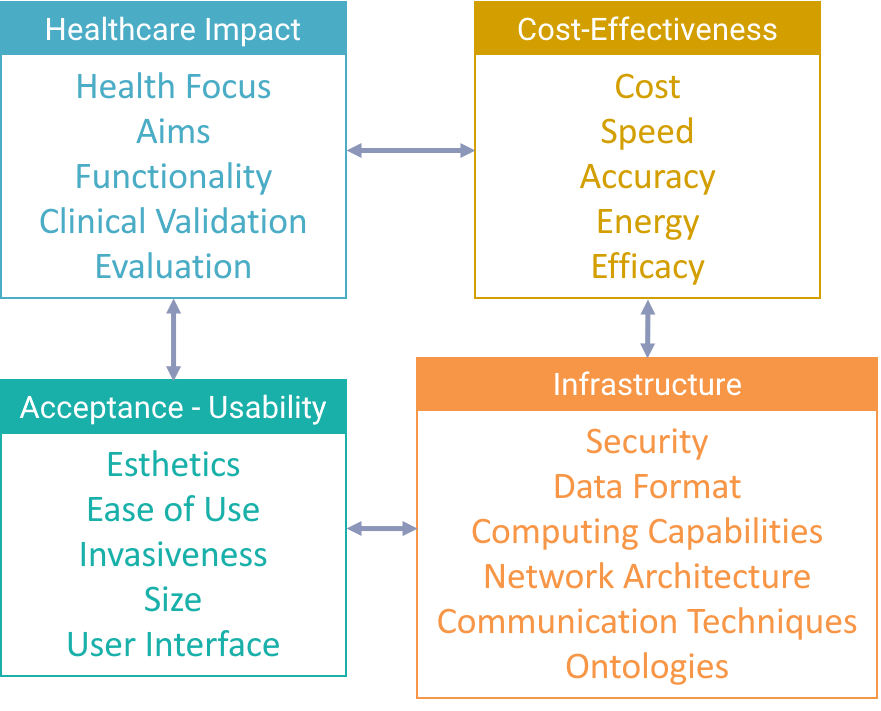 Case studies are also separated according to their health focus. In Figure 4, the allocation of studies is presented. Alzheimer’s disease is once again the leading health focus with fifteen studies. Two of them are combined with fall detection and one with dementia. Dementia and fall detection are represented in five studies each. Finally, Parkinson’s disease appears in two studies, and the general categories of eldercare and telemedicine in one study each. Figure 4. Case study papers according to their health focus. 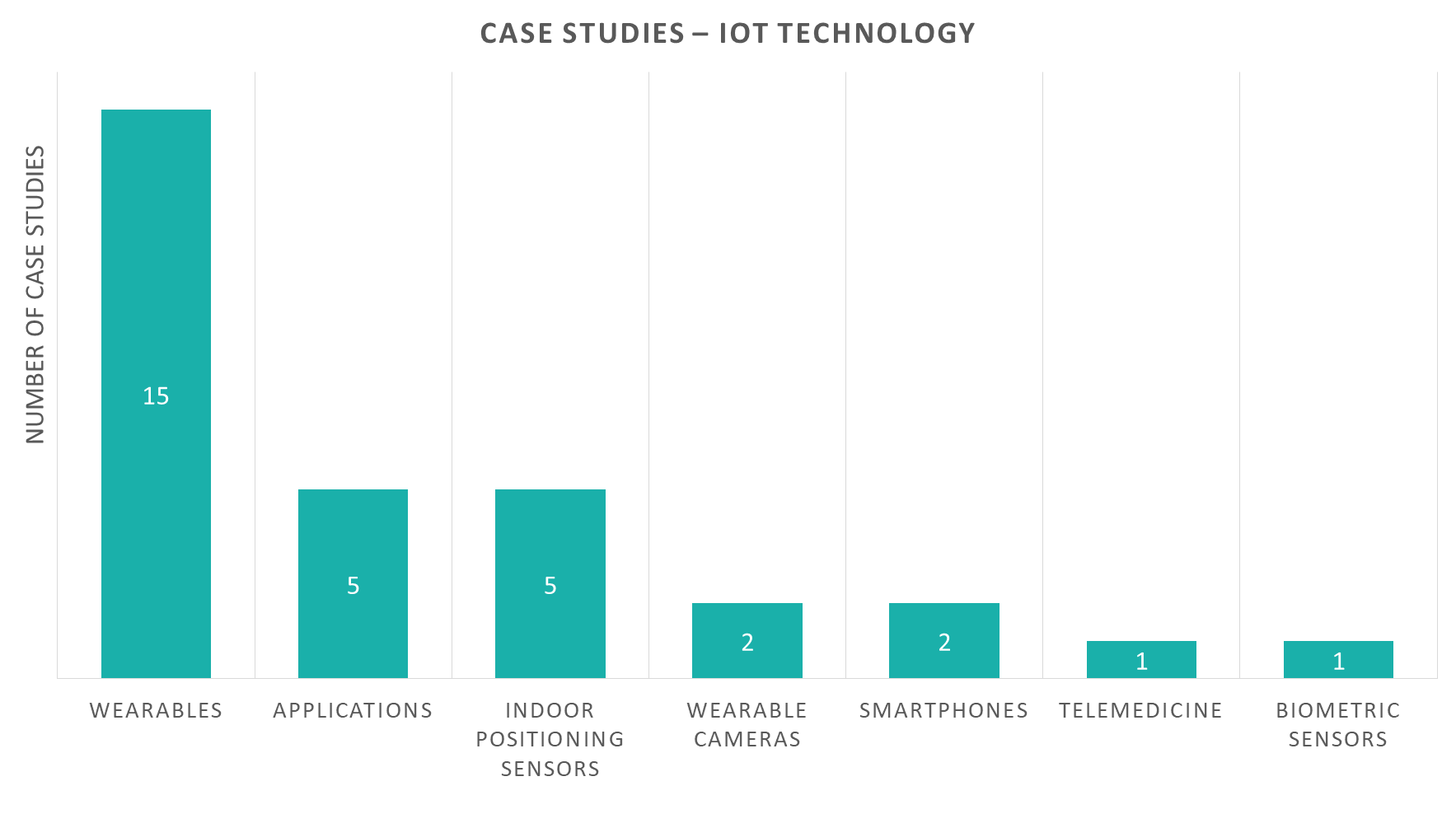 Figure 5. Case study papers according to the IoT devices used.

Studies classified by different “aims” are shown in Figure 6. There are five studies aiming for intervention, assessment comes second with four case studies, and monitoring third with three. Aims that were represented in two of the case studies each were fall detection, wandering detection, emergency, fall prediction, and AAL. The rest of the aims identified appear in one case study each and include comparison, symptom detection, GPS tracking, biometric sensors, development, pattern detection, user-centered AAL, gait analysis, and movement analysis. 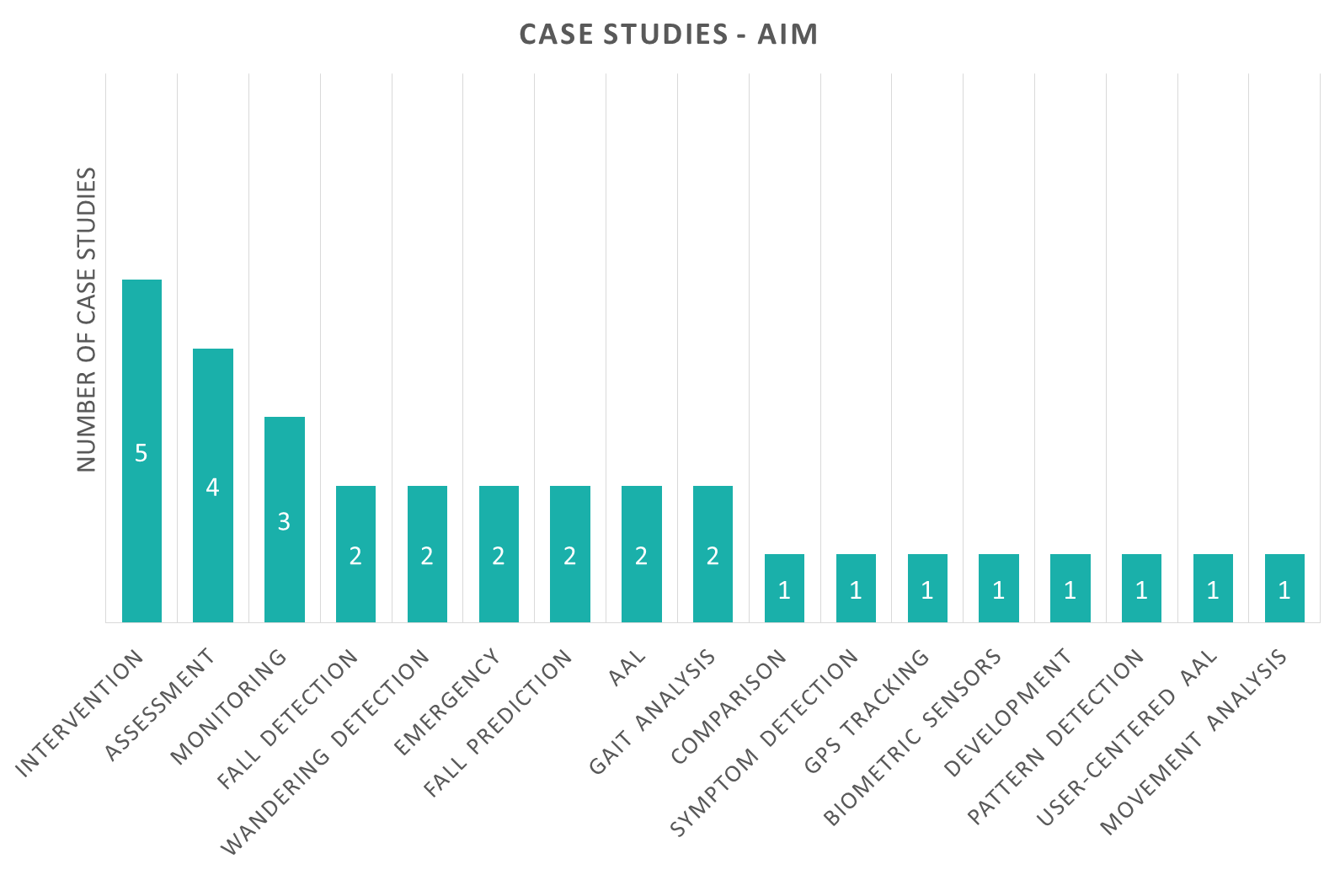 When considering case studies involving patients (i.e., studies with an evaluation), there are differences in their duration. It can be from some minutes to several months, as shown in Figure 7. Three studies examined last less than one hour; four of them last for some hours less than five; four of them for some days less than one week; four of them for several weeks or months, but less than a year; and only one study lasted for more than one year. The results can be explained from the fact that many studies need baseline periods, so is it sometimes inevitable to have a trial last for less than a week and so it might come to last for several months. On the contrary, there are some studies with very short trial periods, such as short gait examinations, that last from several minutes each or a couple to some hours long. 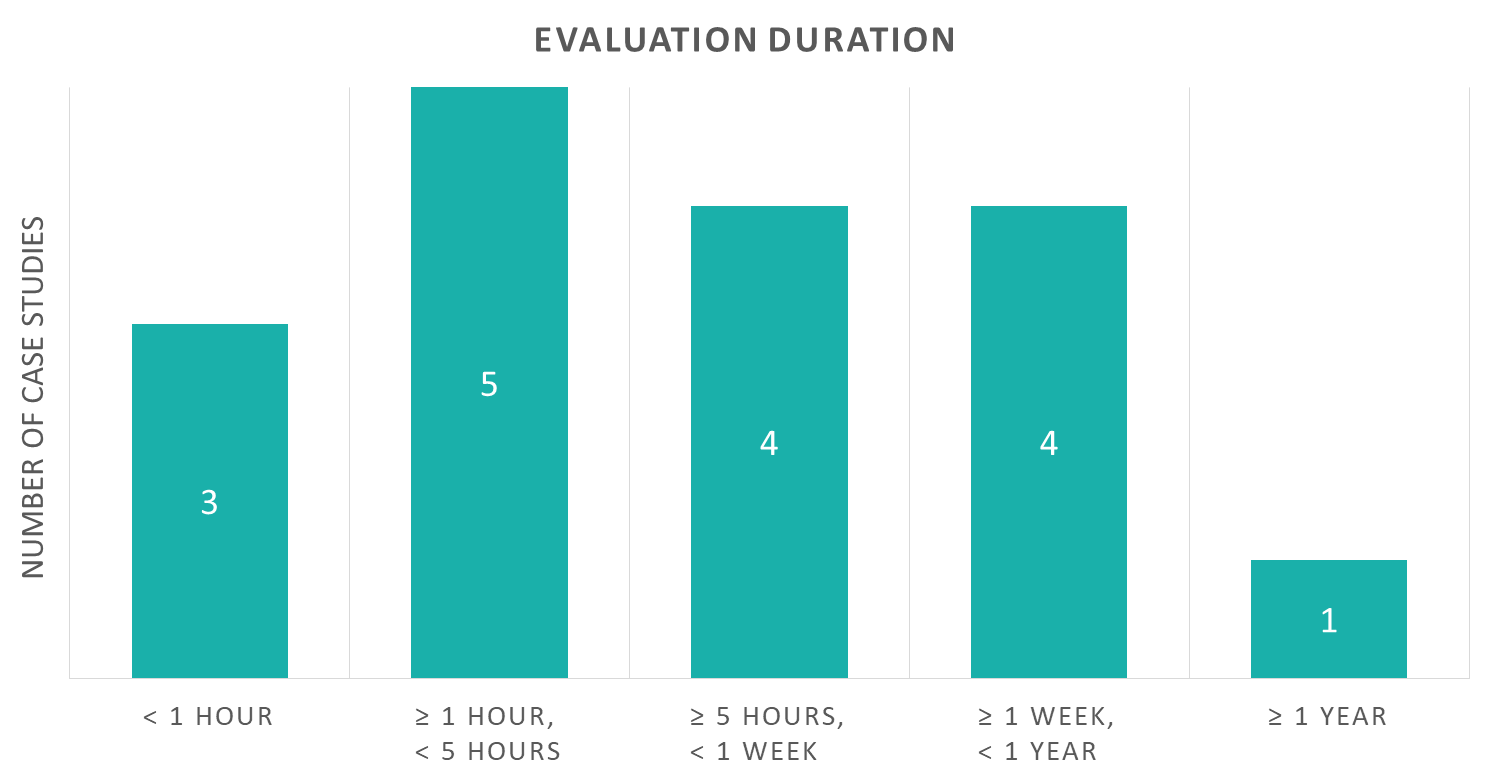 Figure 7. Case studies with evaluation according to their duration. 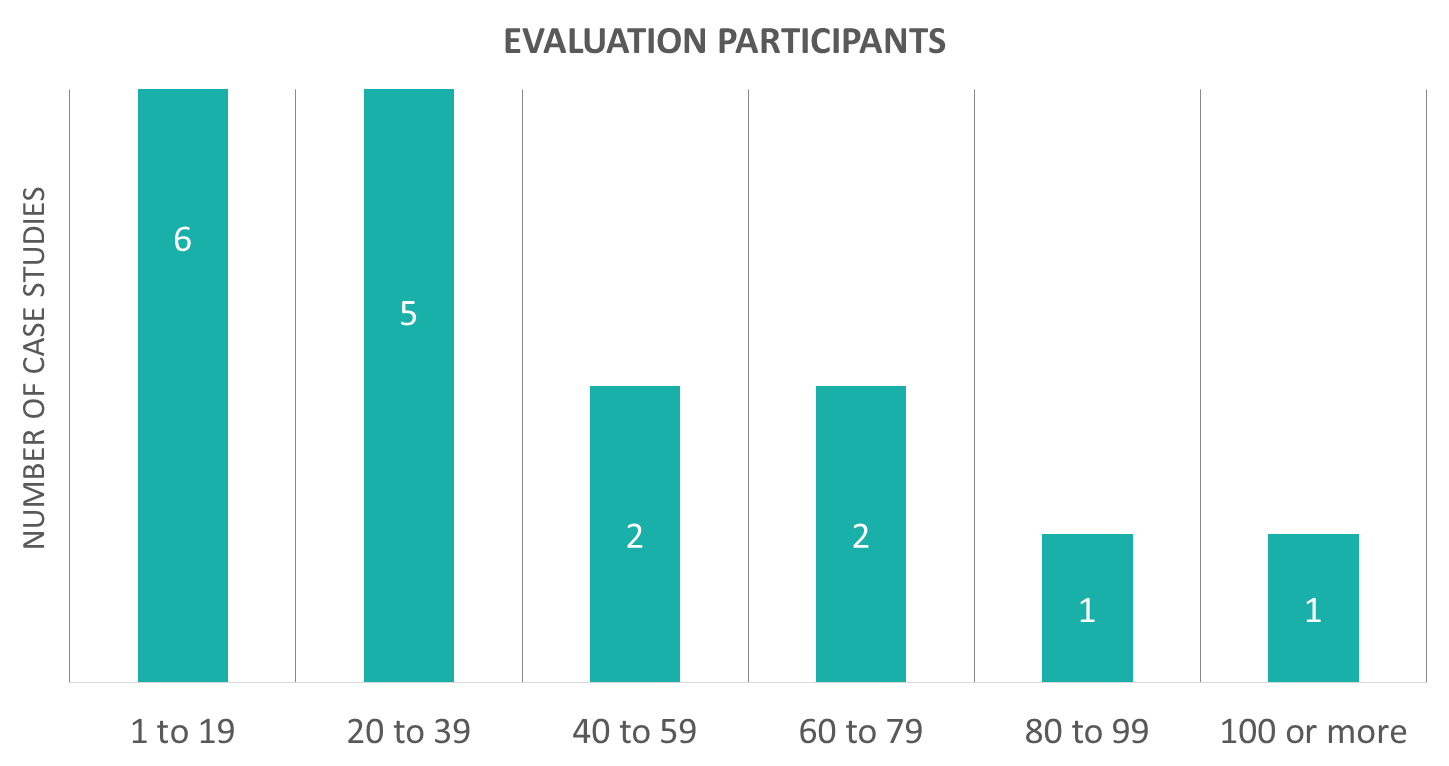 Figure 8. Case studies with evaluation according to their participant number.

Finally, outcome measures are featuring important aspects of the evaluation and are shown in Figure 9. The most common outcome measure categories, with six studies, are patients’ feedback and recognition of mental state. How patients value these studies is very important, and the researchers aim for patient approval and high quality results, considering all the parameters of the trial.

Most of the studies (eight) measure accuracy of assessment. Acceptance was evaluated in five and user satisfaction and cognitive state improvement were addressed in four studies each. Considering user acceptance, for some technologies, patients recognized that it was positively affecting their lives, but they were not comfortable enough to accept them. Patient feedback results also appear in four studies and no negative feedback was identified in general. Accuracy of indoor positioning and fall detection was demonstrated in two studies and reliability was analyzed in one study. 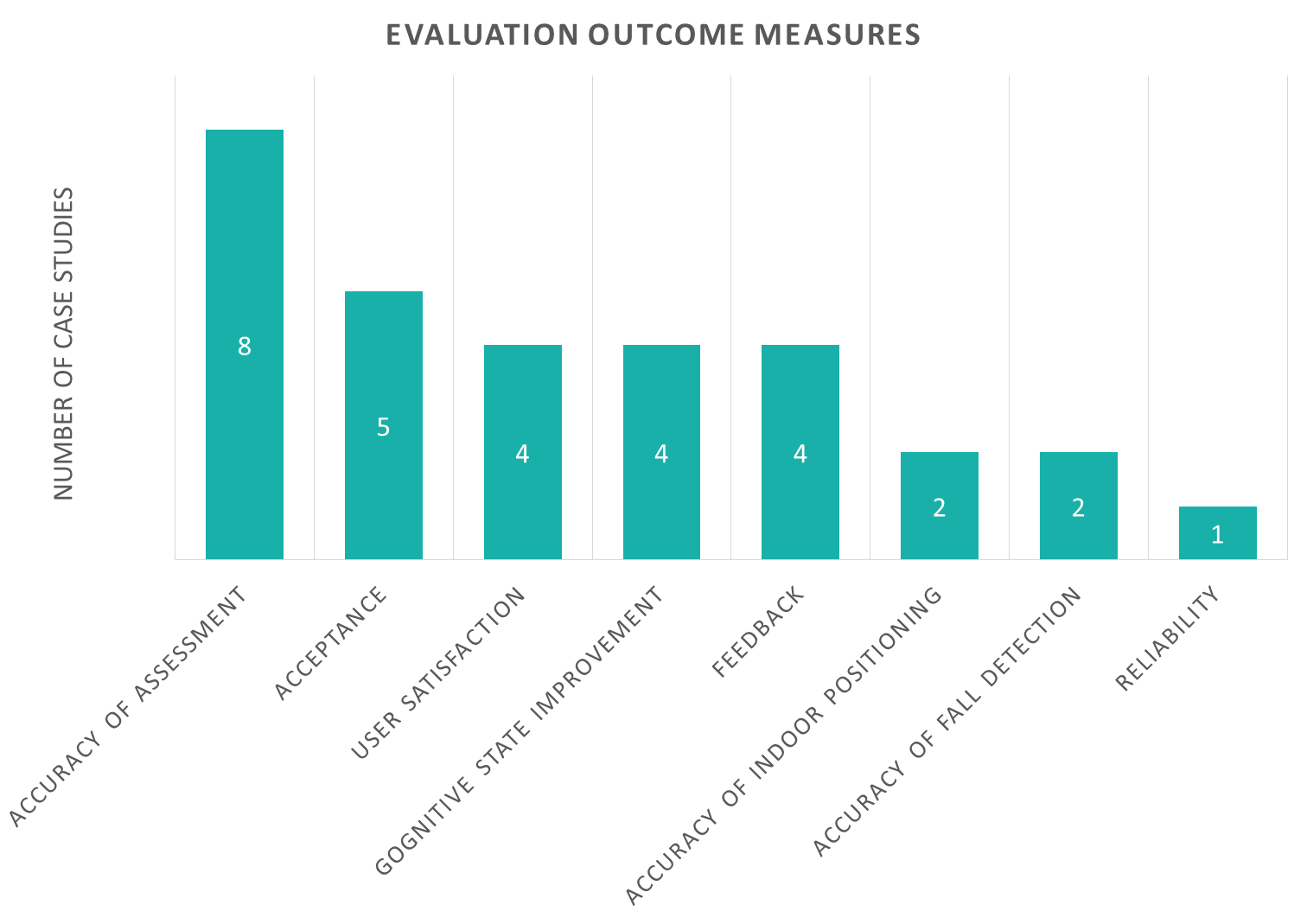 Figure 9. Case studies with evaluation according to their outcome measures

Both market penetration and literature research prototypes of IoT wearable sensors and devices have grown a lot over the past decade, with applications in many aspects of lifestyle and healthcare, including elderly demographics. A challenge that still remains is their acceptance, apparent as a factor in many studies. Acceptance entails ease-of-use of both hardware and software user interfaces, comfortability, size, weight, and battery life/energy consumption parameters. An optimal balance between such comfort parameters, usually met in lifestyle application of retail products, and performance, accuracy, and higher suitability for biometric applications in healthcare, is needed.

Another limitation is the lack of interoperability and a common platform. Many studies have presented segmented AAL projects in the area. Moreover, most studies integrate sensors and implement their own data acquisition techniques. Data interoperability post-acquisition is also limited across studies.

Finally, security, privacy, and ethics are a remaining concern. While standard secure storage and authentication techniques exist and are implemented in most systems, the sector could benefit from IoT specific frameworks for more efficient or autonomous authentication of devices. Privacy and ethics are also managed in an ad hoc manner per study, and could benefit from common frameworks established across vendors and organizations.

Efficient, affordable, and accessible healthcare for the ever-growing demographics of elders and ailments pertinent to them is eminently needed. IoT wearable sensors and devices have been growing immensely in the last decade, penetrating the market and with both lifestyle and biomedical applications. The review presented here explored literature in the sector exploring, identifying, and analysing common aspects among earlier reviews and individual case studies. Healthcare aspects range from chronic ailments, primarily AD and other forms of dementia, PD, frailty, and CVD, to general eldercare and AAL. IoT technologies are prominently wearables, as well as smart home sensors, cameras, microphones, and indoor and outdoor tracking. The major aims include assessment of cognitive state, frailty, and other conditions, as well as support, assistance, and prevention of falls. Besides assessment and monitoring, some studies constitute interventions themselves to improve the individual’s healthcare states. Open issues include common frameworks for interoperability, privacy, and security management tailored to IoT.

In accordance to that, future works in the form of novel studies or literature reviews could focus on the human aspects of IoT for eldercare. Such aspects entail technological hardware and software features and how they match human needs, particularly to elders and respective ailments. The balance between technological capabilities in terms of accuracy, performance, and modalities and human requirements for comfort, durability, and often esthetics is everchanging and could be investigated. Another aspect is the duration of the studies. With more advanced, durable, and comfortable technology, only made available recently, studies that explore longer-term effects and benefits could emerge. Constitution of Big Data from IoT wearables could soon emerge as predictive medical tools and digital biomarkers for elderly enabling care at home, as well as pharmaceutical treatment by accelerating and optimizing clinical trials.